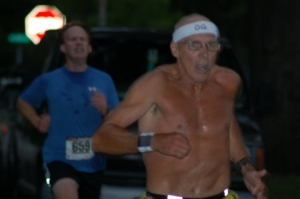 This is a new race on the Tour this year, using an old certified course in my favorite neighborhood, Shandon. Columbia is known for its terribly hot summers, and this day was no exception, but this race was held in the evening (7 pm). As luck would have it, a pretty nasty storm approached but did not directly hit the area, which caused a sudden cooldown just as the race started. Ended up in the 70’s at the start. Course was almost flat. There was a nice crowd for this race and a pretty competitive field. I had no idea what to expect at this race, as I had been running some of the best times of my running life in the spring, but the heat had really killed me at my last race at the Lickety Split in Hartsville, where I had nearly died en route to a 20:09.

I decided to start out fast in this race, as this strategy seems to always work best for me in 5ks. It felt surprisingly good with the breeze from the storm and the lower temps. Plus, since I usually run in the afternoon, it was nice not to still be waking up at race time. I knew I was blasting it pretty hard, but was still surprised to look down at my 1st mile split at 6:03. There were quite a few ahead of me, so I guess the weather was working to everyone’s advantage. I didnt see Darrell Brown, who is my main rival in my age group, so I didnt know what was up. He finally passed me at abut 1.25 miles, and thought he was on his way to trouncing me as usual. However, he started slowing pretty soon thereafter, and I actually overtook him again near the 2 mile mark. At about the same time, Robbie McLendon aka the OG, passed me. I was really spent at the 2 mile, but saw my pace still was around 6:15 or so. The rest of the race I was sucking some serious wind. I was trying to chase down the OG, with the possible ghost of Darrell chasing me down from behind. At the last bend with less than a tenth to go, I saw the mythical 18’s still on the clock. I started sprinting as hard as I could and pulled up just behind the OG, but his kick is legendary and he just edged me at the line. 19:10 finish time and a new PR by 7 seconds! Finished 2nd in my age group behind Angel Manuel. Darrell said he had some breathing problems and actually stopped to walk briefly.  The race had a great afterparty at Publick House with beer, wings, veggies and dip. I missed the awards because I made a bee line for the bar as soon as I finished. Gotta have priorities. Ended up being a great night, as the Gamecocks were on the TV there, and won their game en route to their second championship.