A little over ten years ago, I suffered through another Carolina loss to Clemson, and in my post game rage, I set out on a rainy run. I had briefly gotten into running in 2007 when I was living in Charleston, ran three races, got hooked, then promptly trained myself into getting nasty shin splits that completely sidelined me. It had been a few months since I had tried to give it another go that day in November 2008, but I came back after 3 or 4 miles (no Garmin then) and found I actually didn’t have pain. As soon as I was done, I went online and launched a fateful google search to pull up “Columbia Running Club” and “Strictly Running”. I saw they had a race I could train for in about a month. That race was Cold Winter’s Day. I was in.

Somehow I managed to not get injured in that month. It probably helped I went down to the old SR store and got an actual pair of running shoes. Big, boat-like stability trainers, but they weren’t going to give me shin splints. I showed up to CWD 2008 not knowing the course, not knowing a soul at the race, and no idea of what I could do. I had managed 25 and change at the 2007 Reindeer Run, so naturally I thought, with a year of barely running and being injured, I’d try for a sub 23. The grandiose ego existed even in those days. So, like the noob I was, I went out way too fast and started dying. But then I saw the yellow arrow sign at the end of a long straightaway, which I was sure was the finish. I blasted away with some primordial version of the Blue Shoes kick, crossed a bridge, and realized this was an apartment complex not the finish. Oh @#$!  I death slogged the rest of the race, which was a good half mile, did another really ugly headless chicken sprint, and crashed through the finish at 23:59. I about died, and way off my goal, but the euphoria was palpable and my racing addiction was renewed. Signed up for the 2009 Red Nose 5k when I got home. And the rest is history.

Ten years and probably 350ish races later, I always come back to Cold Winter’s Day. Except this year, my body really didn’t want me to. I took several days off in early December thinking I was going to crush Kiawah. Shat the bed in that race when a well rested but tight as hell hamstring decided it didn’t want to do 6:40ish pace.  Took it easy since then. I was still running daily, but nothing that was going to make the hammy mad. Just when things felt good again, one of my disease vectors, I mean children, gave me a wicked head cold that basically destroyed my Christmas week.  Snotapalooza, headaches, coughs, insomnia due to all of the above. Good times. So I wake up on CWD morning with the idea I wasn’t going to race, just watch. All the TDC points were secured, snot still flowing, only a few hours of sleep the night before. Done deal. Still, I night as well put on running clothes to get a few miles in before watching the race.

When I got there, I thought about my bib. For some reason I felt compelled to pick it up. Maybe I’ll jog the course like I did when I was sick in 2014. Sounds good. Did a couple of miles warmup with Geary, Silent H and Jen Jik. There were some serious Tour de Columbia maneuvering at stake with the double points for this uber competitive race.

As such, everyone and their mom was out for this one.  Deogracias was on hand to throw down with the big boys. There were quite a few elite looking types that were probably going sub 16, including last year’s winner, Theo Kahler. Shawanna and Jen were clearly the tops in the women’s field, as none of the SR ladies were racing. Joyce brought out her whole tribe of Team Utopia Youth with 9 year old state record holder Kendra Miles. I can vouch there are plenty of strong adult male runners that fear getting a beat down by a 70 pound 4th grader.  THE CODE is making a rare 2018 race appearance. The entire CRC royal family, the Weavers (now Weavers and Loughlins) , were on hand. The CRC veteran hardcore group of Henry Holt, Pete Poore, Leeds Barroll, Peter Mugglestone, and Rocky Soderberg were there. There was talk of some hellacious Tybee training morning workout devised by Coleen Strasburger, fittingly wearing bib 666. I think they did the Starbucks’ early bus, regular bus, something in between, the 5k race,  then something post race.  Evil, indeed. Other familiar faces included the Fadels, Naomi Rabon, Jenny Prather,  David Nance, Dave Hale with canine sidekick Angus McCloud, Fiona Martin and her husband Lance Schultz, Hou-Yin Chang, Ivery Baldwin, Alsena Edwards, Brie McGrievy, Greta Dobe, Missy Caughman, Shirley Smith, Ron Hagell, Kat Hudgins, Lynn Grimes, Kerry Stubbs, Will Rowan, Lucy and Pheobe Fischer, Sharon Sherbourne, Jennifer Reeves, Matt Gregory, Greg Fowler, Robert Taylor and Amanda Wardlaw.  Andrew Touzel was making a comeback. Eric Allers was on hand to make sure the epic CWD blue shoeing of 2017 did not happen again, along with wife Sarah.  Strictly had Drew Williams, Geary, Derek Hutton, Colby Coulter, David He, Justin Jones, and Steve Rivard. TUS had coach Justin Bishop, Jen, Julia Norcia, Joseph Kiprotich, Sheila Bolin (paced by Mike Nance), Mike Compton, Jim WIlliams, Ronda Sanders. Without Limits had coach Trey McCain and Eric Gilfus.

So yeah, trophy hunt this was not. After my warmup, I decide the hammy seems to have loosened up some, and after a thoroughly disgusting desnotting, I figure I can at least jump into the race. Maybe even tempo it. We would see. Weather was ridiculously warm, in the 60’s. Fittingly for my 10th raceversary, CWD had gone back to their original pre-flood course. The famously NOT flat and fast course advertised by Selwyn. Cool.

Liz Locke started us off and I’m immediately swarmed by people hauling ass up the initial hill on Trenholm. I decide to ride Eric for a moment just to keep him guessing. He then left me in the dust pretty quickly. Doing my first semi fast run since Kiawah, my hammy is quietly complaining some and my lungs are wondering why the hell we are breathing hard after hacking all week. Being in a competitive race with a bib on,  the adrenaline kicks in and I feel like I have to at least do something respectable. I figure around 21 minutes would be acceptable to the giant ego.  After the initial Trenholm hill is a long decline on Spring Lake, another bump up, and then another extended downhill along Forest Lake golf course.  I manage to edge past micro beast Miles to temporarily avoid getting elementary schooled, and I hit the mile mark at 6:31. I can still see Code and Jik up ahead but I don’t recognize anyone else in the vicinity. I figure Silent H must be just behind me, relishing a chance to take down melon head boy. I cruise down to the flat area with 2 bridges and I know there’s that monster hill at the halfway point. Crossing the bridge I feel my hamstring has given up and stopped being tight. With the hill, all that Downtown Y weight work actually starts kicking in and I pass about 10 people on the incline. This only serves to stoke the internal inferno of race adrenaline and grandiosity, and by the top of the hill I realize I’m apparently going to race the rest of this hard.

I’m kind of gassed flopping down the hill on the other side, but mile 2 surprisingly comes back in 6:17.  I realize I still have a chance to break twenty minutes, the old benchmark, the one I epically failed to attain at the 2010 version of this race. And what unfolds next is that long straightaway to the apartments with the faux finish from 2009. And what’s better? Targets. And number one has a singlet with CODE on the back. Code’s keto diet apparently causes him to crash at the end of races, and he was definitely fading some. Fortunately, my beer and carbs diet leaves me plenty of “fuel”. As we near the apartments I manage to pass him, both pasty old men unable to speak for all the wind suckage. That’s good since I was afraid he would release the race demon from this year’s 811 run (i.e. YOU BETTER F%#*)&G RUN!!). Selwyn always talks about the downhill finish to the CWD course, but he fails to mention the roller coaster of hills to get to the top of said downhill. I’m suffering pretty bad at this point, but I see Jik up ahead with her head up, so there’s blood in the water. What started out as a tempo now gets launched into a 1000 percent effort. About a quarter mile from the finish, I manage to pass Jen and go into my typical maniacal kick mode. I can hear footsteps behind me which ramps it up even more, running scared from the ghost of Jen Jik behind me. I can see the clock still in the 19’s at the top of the finishing hill and its full steam ahead on the pain train. Mile 3 in 6:11. I crash through the finish in 19:40 and I don’t think I’ve felt so destroyed by a race in years. But hey, with Drew getting masters, and Nance pacing Sheila, Angel MIA, and Code ketoing out, I manage to pull off an age group win, AND A TROPHY. All is well again.

In the overall, this was a total beastfest. First place went to Gabe Haughey  in 15:11, followed by Theo Kahler , Johnathan McGinnis, Alan Deogracias and Colby Coulter all under 16:30.  Shawanna easily took the women’s win in 18:16, with Jen notching a sub 20 for second and Hannah Beach, Kendra Miles and Faith Boyer rounding out the top 5. Masters winners were Drew Williams, Adam Ward and Eric Allers on the men’s side with Sarah Allers, Julia Norcia and Naomi Rabon on the podium for the women. Grandmasters winners were Greg Fowler and Alsena Edwards, while Senior Masters (60+) went to George Sykes and Lynn Grimes.

Age group honor roll:  Lucy and Pheobe Fischer finished 1st and 3rd in the 15-19. Jessica Weaver was 2nd in the 20-24 while  Kyle Norcia won among the men. Steve Rivard, Gage Hicks and Derek Hutton took a very competitive 25-29. Justin Jones and David He were tops in the 30-34.  Justin Bishop took the 35-39 men, while Fiona Martin and Ronda Sanders were 1st and 3rd among the women.  Amanda Wardlaw and Brie McGrievy were 2nd and 3rd  in the 40-44 women while Code took 2nd among the men. Ricky De Shaw won the 45-49 men, with Johnathan Kirkwood 2nd. Gretchen Lambert was 2nd among the women. Sherry Fadel, Greta Dobe and Sue Weaver claimed the 50-54 podium while SILENT H easily won on the men’s side. Colleen “Satan” Strasburger and Sandy Smith went 1-2 in the women’s 55-59, Robert Taylor was 2nd among the men. Geary McAlister was champ of the 60-64. Mike Compton and Leeds Barroll were 1st and 3rd in the 65-69 men, with Sharon Sherbourne 3rd on the women’s side.  Peter Mugglestone and Ron Hagell  took 2nd and 3rd in the 70-74 men, while Henry Holt stood alone as the 75+ champ at age 83! 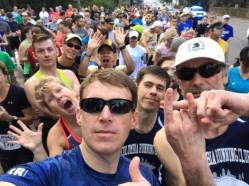 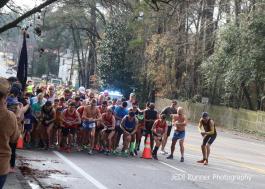 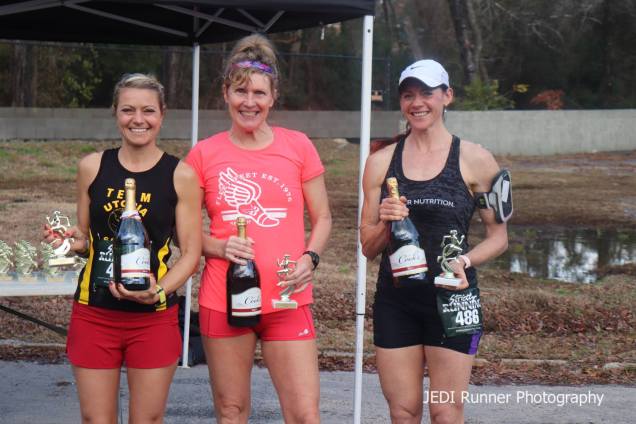