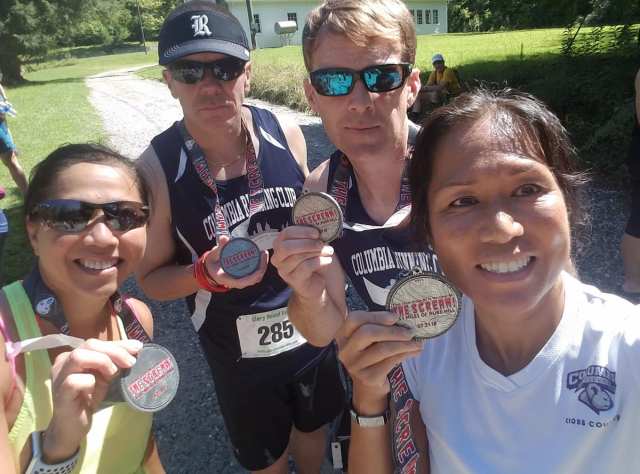 July is the cruelest month for runners, or really anybody, in Columbia, SC. I’m an afternoon trainer, so I get to delight in the joys of running in 95 degree, 100 percent humidity days that make you curse the sport you’ve chosen. Accordingly, race directors are not too keen on staging their events in the oven/sauna of our famously hot summer. So with a lull in the Tour de Columbia in July, what is a hardcore race addict to do? Run to the mountains!

I actually had no intent on racing this weekend, but CRC vice president and resident puppetmaster Joyce Welch offered me a deal I couldn’t refuse. Tug had to bail on this race, and said he would transfer the bib for half price ($45 instead of $90). Joyce said I could crash at their airbnb in Morganton for free with Roy and Kim so it didn’t take a lot of arm twisting for the race addict to get his fix. Plus, this would give me a chance to scout out Morganton for my attempt at the Table Rock 50k in September.

I had actually heard of The Scream before. Advertised as “13.1 miles of pure hill”, it’s basically running down a mountain. You get shuttled up to Jonas Ridge, run a couple miles on top of the ridge, before an insane descent over the course of the next 10 miles on an old unpaved mountain road. I couldn’t tell by the results, but it seemed like it would make for a crazy fast course as long as the road wasn’t too technical. I read the “Old Runner” Richard Hefner’s blog about the race and he gave it his seal of approval. I was in.

I drove up and met Roy, Kim and Joyce in Morganton the day before the race. The airbnb was super nice and Morganton is a cool little town. We ate at the root and vine and I stuffed my face with their amazing wood-fired pizzas. Later, we had a walk around town and stumbled into a “TGIF” festival with a great live band. A good time, though I was fearful of colonic repercussions the next morning with multiple beers and pizza. Still, it should be noted that I had a 2 minute half marathon PR at Savannah in 2014 on the same prerace routine.

The logistics of this race are a bit of a chore, so we had a bright and early wake up call the next morning at 5 am. We were staying about a half hour from the shuttle site, “Brown Mountain Beach Resort”, which is different from the start and finish lines. They estimated a half hour ride on the shuttle up to Jonas Ridge. As is her tendency, Joyce the puppetmaster waited until the last minute, and it took some Roy Shelley formula one racing to get us to the shuttle area. Our little troop of short Asian women and exceptionally pale white guys made it there just in time to catch the next to the last bus.  However, with an 8 am start time, we still had plenty of time to pick up our bibs and navigate the portapotties. Plus, it was actually cool. Almost cold. 57 degrees at the start.  Local Columbia Running Clubbers Melanie Lindsay and Jennifer Reeves also made the trek up from SC, along with previous Columbia runners now Concord,NC’s Katie Rose and her husband Jason.

When we finally arrived at the start line, I realized I had no real game plan for this race. I hadn’t done speed in weeks , probably the 2 mile relay was the last time I went fast on July 4th. I have been doing plenty of mileage for me, 40-45 miles per week, so I should be ok on the endurance front.  At some point, I decided to start off  conservatively and see what the hill felt like. Despite my 190 lbs, downhill running is actually my weakness in competition. People pass me all the time on declines. I’m surprisingly much better at hill climbing.  I’ve run the Blue Ridge relay 3 times and I knew that the unpaved downhills can tear up your legs pretty good. We would see.

With the start, everything felt amazing. I realized that 40 degrees cooler and low humidity make for a slightly better running environment. Interestingly, within a mile I was in my own little pocket with no one around me, despite the 350 entrants. First two miles are very gently rolling hills on pavement. Mile 1 came in at 7 minutes flat, which I figured was pretty much where I wanted to be. My half PR pace is mid 6:40’s and I certainly didn’t want to blow up early since my race fitness was questionable. Near mile 2,  the course suddenly turns right and the freefall begins.

Sweet baby jeezus. All of a sudden I’m plummeting down a winding unpaved mountain road, punishing my quads with every step. Given my tentativeness around rocks and drop-offs, (see here) a masters looking dude and 2 ripped women pass me on the first descent right off the back. On one hand, my calm, conservative, race brain is telling me “Now, Alex, run your own race, stay within yourself and remember this is a long distance”, but evil competitive brain says ” DONT LET THAT DUDE STEAL YOUR AGE GROUP. DONT GET CHICKED. BEAT THEM. BEAT THEM!“. Somehow I compromise and try to keep these three in my sights. I’m having a hard time judging pace. Feels chaotic and fast, but not a whole lot of energy is required to maintain the inertia of a 190 pound albino sasquatch in freefall. I try and find that Bob Ross happy little place where it feels comfortably hard.  The miles kind of glide by and I’ve settled into a nice 6:45 that feels easier. It’s hard for me to go much faster because I’m navigating this road with all the grace of a runaway 18 wheeler. Legs and arms flopping all over the place. The second woman in the three pack ahead of me falls off a little and I am right behind her for much of the next couple of miles. With her all of like 5’2” and 100 lbs, I’m sure she will be having nightmares of a grizzly chasing her through the woods tonight.  At some point I end up passing her on the first real incline, in mile 6. Although it’s relatively short, the little hill feels like hell with all the previous decline. Still, it helps me gain on the field and draw closer to masters guy and other woman. Masters guy has a nice fluid stride and the woman had a bull city (durham) running shirt on, so I know she is probably a beast too.  Around six miles I also start hearing a pack of dudes talking , and as soon as the roller coaster starts again they all pass me en masse. Most of them seem younger but at least one may be age grouper. Evil race brain engages again.

More plummeting ensues. I’m still feeling OK, though the pounding is starting to take some toll on my quads. Plus, I made the noob decision to throw on my brand new shoes for this race, and there may be a hot spot/blister trying to happen on my left toe area. More 6:45s on the watch. The Garmin is not matching the mile markers, but the race organizers warned that GPS is going to be off on this twisting remote road in a heavily forested area. I thought there was a significant hill around 8 miles on the elevation map, but this never pans out, may have been the incline at between 6 and 7. There’s another incline around mile 9ish that, again, feels terrible but draws me closer to what is now a sizable mob just ahead of me.  I catch masters guy and bull city girl but the talkers are still ahead. The roller coaster begins once again and mile 10 hits. I love mile 10 because the 5k is my specialty.  With 3.1 to go, I can gauge that. Lungs are doing great, but legs are pretty much toast. Some guy passes me just as I’m figuring the physiologic calculus, and damned if he doesn’t look early 40’s too. DAMN, THE FOREST IS FULL OF MIDDLE AGED DUDES. I figure I will ride the mountain as long as I can and start feeling the pain once it levels out. Just after 11 miles, the road turns right and flattens, so I figure it’s go time. The first straightaway feels pretty good but here comes some little inclines, each sucking out my will to live. I pass the mile 12 marker and push in all the chips. I end up catching the talker mob, one of whom is walk/running by now but still keeping up pace with the back of their pack. I surge ahead on what I think is the last incline and start desperately searching for some finish line. Nope, keeps going and going. Just when I think I’ve killed myself by kicking too early, I see a school bus through the trees. This has to be it. One last turn when I’m about dead and I see the red clock in the distance. Age grouper guy is maddeningly close but he has launched into a kick of his own and I just don’t have the gas to catch him. Maybe I misjudged his age, I hope. Closing in on the finish, it’s still in the low 1:27’s, which I’ve never seen in a half (pr is 1:28:27). One last push and I cross in 1:27:31. I had been feeling great, but that last mile and a half about killed me. Pretty excited about the time, though I know I can’t really count it with the ridiculous elevation loss. I had hoped maybe for some masters love, but with one deep masters and a crazy fast field, I barely eked out 3rd in age group.  And of  course, “age grouper guy”, aka Bryan Hull from Tampa, was exactly my age (43) and beat me by 9 seconds. It’s a good thing I kicked it in though, because nine seconds behind me was a 40 year old and 28 seconds behind me was another age grouper. Top 5 age groupers in the 40-44 all under 1:28 with the 42 year old masters winner pulling a 1:21. Dayum. Age group from hell!

Roy had some pacing issues where he thinks he entered a wormhole in the space time continuum, but still finished with a respectable 1:50.  HIs 50-54 age group was almost equally as brutal. Joyce and Kim opted for a more social run – they were getting a preview of part of the Peak to Creek marathon course in October. Melanie, Jennifer, Katie and Jason were also finishers , along with locals Robert Starnes, George Starnes, and Marcy Utheim. Richard Hefner scored 2nd in age group in this crazy competitive race.

I stayed at the finish to take some pics and waited for the shuttle back to Brown Mountain Beach. At the resort, they had an awesome roasted chicken lunch, free Catawba brewing company beer (White Zombie is one of my favs) and beer glass awards. You can swim in the mountain stream below and hang out on the “beach” alongside the river. Really nice. A Blue Shoes big thumbs up!