The Shandon Turkey Trot is one of the oldest road races in the Midlands, dating back about 30 years. Put on by the Shandon Neighborhood Association, it was a regular on the Blue Shoes calendar in the early part of this decade, when they offered amazing turkey trophies. This era included a brutal blue shoeing of Sarah Allers, who blasted me with a slew of British expletives as I sprinted past her 10 meters from the finish. Sadly, it also was the site of Ken Vowles giving me a dose of my own medicine with a brutal blue shoeing of his own, as well as an ego-crushing double strollering I suffered another year. My interest in the race faded over the years, though, when they nixed the turkeys and started going to the dreaded “winged foot” generic medal. They are like the trophy hunter’s kryptonite. I get too close to a winged foot and I start getting the chills. I think I have a few dozen in my trophy dresser (what, doesn’t everybody have one?) which are completely unidentifiable as to which race they came from.

Earlier this year, the road race rumor mill said that this race wasn’t going to happen in 2019. Attendance had gone down, and there was a lot of competition that week with Hairy Bison, Palmetto Half, Sleigh Bell and Turkey Day. But somehow Erin Roof got involved, and like Tyler with the Palmetto Half, another race was resurrected from the dead. She asked me how this race could be better, and as you can tell from the above, bringing back the turkey trophy was paramount. She decided to make the start/finish near Craft and Draft, involve beer discounts, change the distance to 5k, move the race to Black Friday and have a turkey costume contest too. With all of that, I was definitely on board. Somewhere along the line I agreed to go all in with the Turkey costume, which given my predilection towards road race cosplay (see also Bunny Hop bunny, See Spot dog, the Lucky Leprechaun, Pumpkin run pharaoh/Viking/hulk), did not involve a lot of arm twisting.
I got the costume a couple of weeks early and saw that this thing was definitely not built for speed. There was one hole for the legs and it had a giant turkey belly, which rode up like a miniskirt with an overflowing muffin top. And where the hell were the tights for the legs?? Apparently they were an “accessory” that wasn’t included. Add some flappy wings and a huge tail and there was going to be some serious drag. But hey, if there’s anyone good at transporting a non-aerodynamic, heavyweight physique through space, it’s me. And at least it wasn’t a Hairy Bison nude skin suit. Nance and Brooke, you are true cosplay heroes.
I showed up my customary hour ahead of time, which was easy with the 10 am start. Had to get in some solid warmup out of costume so I wouldn’t tweak the Achilles. In a bit of luck, the 2014 Harbison trail Runners shirt matched the Turkey costume color perfectly. There was a big crowd, and Erin mentioned they had almost 400 participants. The zombie race was definitely alive and kicking. She couldn’t have asked for better weather either – sunny and 60 something degrees, fall leaves still in good color. I know Tracy/Jedi Running Photography was glad to finally get good photo conditions after 2 straight weeks of shooting in the cold rain and wind. 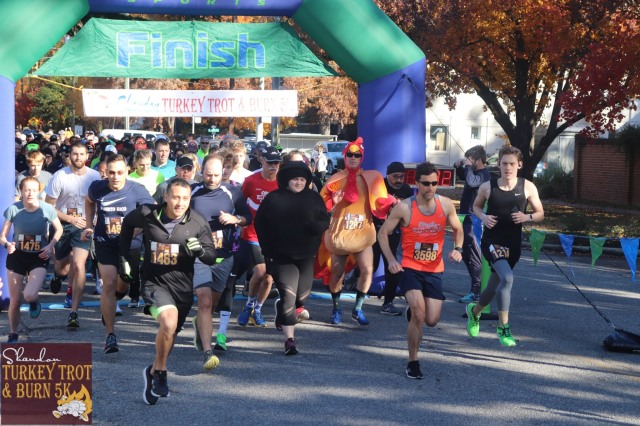 Lining up at the start, I tried to do a quick assessment of my trophy possibilities. Of course the major wild card was how well I could actually run in this thing. Drew Williams and Eric Allers were the main masters competitors. I was hoping that one or both of these guys could get the top three overall to give me a chance at a masters trophy (also three deep). The masters and overall trophies are like the original turkey trophy age group awards except with a COLUMN OF FIRE. I must have one. I’m a little wary of Johnathan Kirkwood too since he has been throwing down low 20’s recently, as well as Geary McAlister. Ladies race has a couple of fit looking unknowns (Thanksgiving races always have a few out-of-towners) and Sarah Allers, though she (and Eric) just raced the day before down in Charleston. Other familiar faces at the starting line included John Baker, Ivanka Tolan, Regan Freeman, President Roy Shelley, Tour director John Gasque, Chap Houser, Ken and Sheila Bolin, former social chair now Baton Rougian Sarah Soltau, Stephanie and Lucy Fischer, Patti and Ken Lowden, Ed Aulfuldish (pacing daughter Mary), Eric “Horn Star” Gilfus, Joey and Gabriella Swearingen, Katherine Harris, Go Pro guy Will Rowan, Healthy capital director Shenequa Coles, Kara Clyburn, Michael Beaudet, Clara Nance (also in turkey costume), Gretchen Lambert, Mike/Kat/Sarah Hudgins , Kana Rahman, Leeds Barroll. Lisa Smarr, Paul Laymon, Rocky Soderberg, Shirley Smoth, Ron Hagell, Sharon Sherbourne and Kerry Stubbs.

The course is new but it’s classic Shandon rectangleish, pretty flat and fast, and not in a Selwyn way. I’ve been putting a lot of miles on my legs in my attempt at Kiawah training post Achilles destruction. I was going to go out conservatively and see if I could ramp it up some.
With the start, the 5k speed was like a kick to the chest after all the long distance jogging I’ve been doing. Wings are flapping all around and the gobbler was flying up in my face. But the leg hole at the bottom of my turkey gut is at least not restricting too much. I settle in behind Kirkwood and Tigs and camp out there for the first mile, Woodrow to Heyward St. The Shandonites have actually come out to watch this race, so I get much needed ego stroking attention for my costume. I hit mile one in 6:38ish, which feels kind of rough, to be honest. I debate about giving up the speed and jogging it in, but my enormous ego will not let me do it. I manage to pass Tigs and Kirkwood at about the same time just past the mile mark, possibly with some Brit swear words involved. There’s a squiggle of a turn on Ott and Duncan before the turnaround on Bonham near Sims Park, headed back on Wilmot. There’s a nice decline there, and I try to pick up some speed in the long straightaway. I can see Ivanka , another fast looking woman and a couple of dudes I don’t recognize. I have no idea what Ivanka can do today – she blazed a PR 19:42 the day before but she has to be tired from that, so I work on tracking her down. Mile 2 comes back in the same 6:38, so my costume PR of 19:36 is definitely out of reach. But that was with the bunny rabbit onesie. I finally catch Ivanka after we turn back onto Heyward after a brief stretch on Shandon St. When we finally hit the last stretch, fit girl (who I assume is first female but actually 2nd) is just ahead. With the finish line a long way off, but still visible, I push all the chips in. Gobbler flying, wings a flapping, looking like a hot mess for sure. I catch her and then quickly pull up on one of the random dudes. I think I took him by surprise, because he was like OH HELLS NO and ramps it up and gaps me a bit. I am going pretty hard at this point and consider blasting it out at 1000 percent to catch him back, but the guy has a full head of black hair and not a gray in sight. Surely he can’t be masters. Plus I want to get a good finish pic. So I let him go and start flapping the wings for full effect. Unfortunately, the gobbler flies up and gives me the hallucination of someone about to blue shoe me, so I end up blasting the last few steps to avoid what ends up being a ghost. 20:09 officially. Last mile was 6:19, and who knows what that last kick was, since I forgot to hit stop with all the feathers in the way. But it was definitely balls, I mean gobblers, out. 10th overall, 9th male. I was all excited about masters, especially when Drew told me he placed second overall.

That left Eric and I as top 2 masters, right? NOPE. Turn out one Benny Rodriguez, with his full head of shiny black grayless hair, whom I might have had a chance to nip at the line, was 40 years old. Damn you, Benny. Nice job. I did manage to grab the last COLUMN OF FIRE trophy, 3rd male masters. It now sits proudly on my desk at work.
Post race setup was on point, as is typical with GRIT. Home team BBQ, coffee from Sweetwaters, beer discount at Craft and Draft, free beer at Backstreets Grill and Urban Cookhouse. Instead of bargain hunting I spent the rest of my morning with a daydrinking double dip of C&D and Backstreets. Perfect.
In the overall, 16 year old Jack Stacy took the win in 17:51 with Drew Williams 2nd male in 18:20. Evan Fackler from Oxnard, CA (beware the Thanksgiving out-of-towners!) was 3rd in 18:40. The women’s winner was Liz Wright from State College, PA in 18:13, and second to cross the line. Ivanka Tolan was 2nd, who must have nipped 3rd place Jessa Wigington at the line in 20:21. One can only assume Jessa was psychologically ruined by getting turkeyed and blue shoed in the same final stretch.
In masters, Tigs took first female, followed by Patricia Burt and Casey Cline. Male masters was taken by Eric, followed by the well-coiffed Mr. Rodriguez and some creepy cosplayer.
Age group honor roll:
WOMEN: Mary Aulfuldish took 2nd in the 20-24, PR in 23:17, paced by her dad FAST EDDIE. Stephanie Fischer was 2nd in the 45-49. Katherine Harris was 2nd in the 50-54. Lisa Smarr was 2nd in the 60-64. Sharon Sherbourne was 2nd in the 65-69. “Podium Patti” Lowden was 1st in the 70+. Terry Foody, a USATF masters chair in Kentucky, took 2nd.
MEN: Regan Freeman won the 20-24 male in a PR 21:02. Nice! Tri coach Anthony Brown took first in the 35-39 and barely survived being the next turkey victim in 20:02. Michael Beaudet was 3rd in the 45-49. Kirkwood, Roy Shelley (another PR in 21:52) and Ed Aufuldish swept the 50-54. Ken Bolin was 2nd in the 55-59. Geary McAlister took the 60-64 by a mere 8 minutes. Leeds Barroll was 2nd in the 65-69. Rocky Soderberg and John Houser were 2nd and 3rd in the 70+.
Oh, and let’s not forget the costume contest. After a bitter trash talking battle between myself and 20!20 Vision owner Kelly Hynes Morris for weeks, they awarded the top 3 to myself, Kelly and Clara Nance. Scored a gift card to San Jose’s!
Awesome reboot of this classic race – thanks to Erin, Joe, Sarah, Parker and everyone else involved! 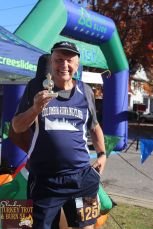