The Sweat it Out 5k has been part of the Tour de Columbia for the past 6 years, and a regular on the Blue Shoes calendar as well. It’s put on by Jamie Duke in support of her son Nick, who has a rare condition, Hypohidrotic Ectodermal Dysplasia, that makes him unable to sweat. In turn, the race is held in June so that runners will do plenty of the sweating “for” him. It’s a really cool event, initially assisted by Shannon Godby and now directed by the swagmaster herself, Erin Roof (GRIT endurance). In addition to a huge breakfast spread, the race is known for its hand painted awards, made by local artist Ernest “Chicken Man” Lee. Mr. Lee even painted a physique-appropriate award for me one year:  Gotta watch the beer intake.

Of course, all races have been toast in the wake of the COVID pandemic. After the one last hurrah at LRAH on March 14, the entire spring and likely summer schedule have been wiped out. What is a hardcore race addict to do??

As it turns out, virtual races. That used to mean these online things that sent you a medal and took your word for it that you ran a particular distance, inviting the overwhelming elitist scorn of the Sasquatch. But when you’re a hopeless race fiend like myself, you take what you can get.

So I signed up for three virtuals, starting with the Columbia Running Club’s own “CoRUNavirus” 5k. I picked out the flattest course I could (Race for the Place) and threw down with Silent H one random Saturday morning. Without any trinkets to win and nobody to catch, it kinda sucked. Thankfully, I very narrowly avoided getting H’ed, with  Randy’s clomping size fourteens just behind me giving me just enough motivation. I finished in 19:43 (Randy 19:50). Two weeks later I did the Race the Rabbit virtual Half Marathon, the registration for which must have been fueled by one too many quarantine IPAs. All I can say is, running 13.1 by yourself with 4+ loops of a 5k course is not something I recommend. I had Shawanna and Jen K pace the first lap, but then I went rogue and just suffered the next hour plus by myself. I did a 1:32, about 3-4 minutes off my race time.

With Sweat it Out though, I had a couple weeks to rest and I was planning to try and throw down a good time. The course is pretty favorable, so Randy and I decided to give it a go on the actual route (virtuals can be run anywhere). But I figured I needed someone to catch. Enter one Sean Higgins. After winning the 2006 Tour de Columbia and living all over the world with the military, Higgins came back with a vengeance in 2019 and threw a wrench into an already brutal Columbia masters racing scene. Poor H is in his age group, so he had only one nickname for Sean, using one of his favorite vulgar terms of endearment. Jen K bailed on racing, but at least I now had, presumably with Sean just ahead and H just behind, a mini pack to try and draw out a good pace. Pete O’Boyle caught wind of our shenanigans on Facebook and decided to join the crowd. Little did the Meadowfield community know that a bunch of old men would be terrorizing their neighborhood Saturday morning.

“Race” morning of May 16 turned out to be pretty ideal. Unseasonably cool and about 60 degrees. At the usual race parking lot, they had taken away the critical permanent portapotty. When I got there Randy was looking like a lost toddler looking for a place to dump. I guess the feeling passed though. We did a warm up trot of the whole course to assure Randy and I that we knew the course. Sean just felt more confused, so it sounded like he might rely on some breathless direction calling to make sure he was headed the right way. We all went back to the cars after the warmup, and sure enough all three of us had brought out the aqua and orange colored “Dan Marino” Vapor Flys. It was about to get real. Wooooo!

With no official timer, I became the starter. Basically just did a on-your-mark-set-go and hit the Garmin. I was determined not to run a crap race again this time, so I took off like a wild banshee, blasting out onto Olde Knight and making the first turn on Queens Way just hoping no cars were coming. The SIO course basically has 3 loops going off the backbone of Galway and Olde Knight Rds. I took the first loop at a pretty good clip though I could hear Higgins right behind me. We passed Meadowfield elementary and entered loop number 2, the “M” rectangle bounded by Mason and Merrill St. I just had to make sure I remembered the cross street connecting them was Winston Rd, so my highly visual memory conjured up beast grandmaster runner Winston Holliday when we hit the loop. I know, the Blue Shoes mind is deeply warped. JI see Janice Compton out for a walk, and I’m sure she’s wondering what the hell is going on.  I feel pretty decent at the one mile mark and figure I’m probably around my typical 6:15-6:20 opening split. Garmin spits back: 6:03. Sweet baby Jesus I’m setting myself up to hurt. But I don’t know how to purposely slow down in a race, so  I figure this bed has been made. I hit US attorney Winston St. and make a left , then turn back on Merrill. I feel surprisingly OK, and it feels like I might be gapping Higgins even. Back onto Galway, I know there’s just loop 3 to go, an out and back squiggle on Saye Cut , right before the Hammond school of perpetual educational debt. OK maybe not that last part. Hitting the turnaround on Saye Cut, I still feel pretty good and BLEEP 6:04 comes back for mile 2. Holy crap, I’m on sub 19 (which is 6:06) pace. JUST. HOLD. ON. At the turnaround I can see I have a pretty good lead on Higgins and H, and Pete is not too far behind.  I got this…

Or maybe not. It’s relieving to get back on Galway and headed for home, but the Blue Shoes physiologic CHECK ENGINE light has just turned on. It turns out there’s an acute oxygen deficiency coupled with lactic acid buildup. What’s worse is that the only hill of any sort is just ahead. I throw myself into the incline and though it hurts like hell, its over surprisingly quick. I make the turn back on Olde Knight and I can literally see the finish, just over a quarter mile away. I am all aboard the pain train at this point, and I try to kick it in,  but the RPM is already in the red and I’m not really going any faster. I am within about 200 meters of the finish, eyes focused on that little bundle of yard trash we signaled as the line, when I suddenly hear something. I get race hallucinations all the time, usually just the noise of my shoestrings or general air turbulence from my bus-like physique moving through space. But this is not that. It’s the sound of Vapor Flys moving at a higher cadence than my own. And all of a sudden here comes Sean buzzing the tower like Goose and Maverick and blowing by me like I’m sitting still. DAMN YOU HIGGINS!! But I got nothin’. Wasted like GTA V. I blow into the yard trash finish line like a semi and hit my Garmin, and do my classic crumple to the ground. 19:04. AGH, so close to the eighteens.  “Official” results were Sean 19:00, Blue Shoes 19:04, H 19:44, Pete 22:36.

You can still sign up for Sweat it Out virtual through 6/30. 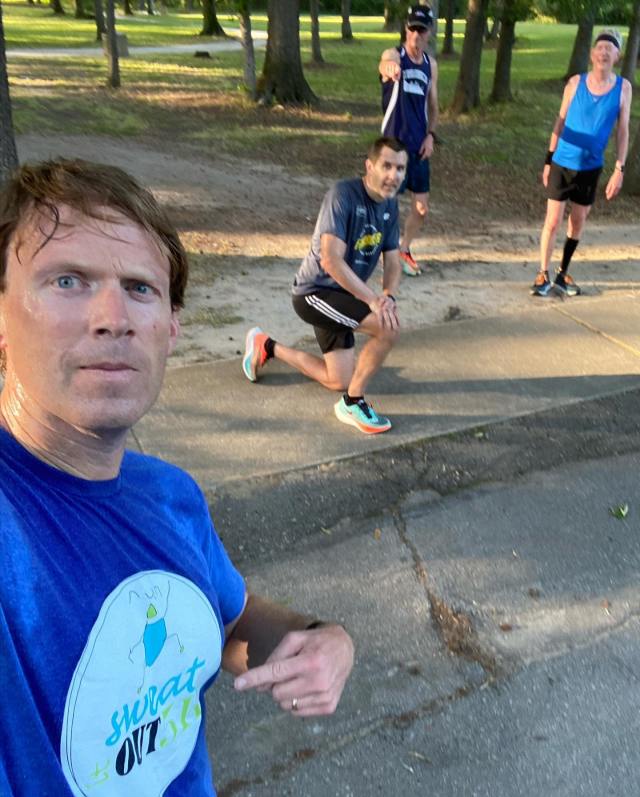