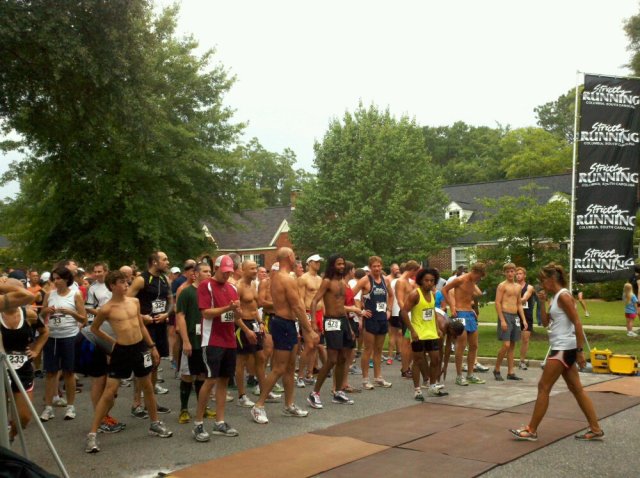 Strictly Running hosts two 5ks in Columbia, the Cold Winter’s Day in December, and this one, Hot Summer Night in August. Both bring out some of the most competitive fields in the area, and tonight was no exception.  I got there at 5:45 for a 7 pm start and the place was already crowded.  Trophy made a rare appearance as did Mr and Mrs Diesel. Temps were brutal as always, low 90’s and miserable humidity. Did 2 miles with Trophy, Burgess and the Code, and I marked off the last quarter, half and mile in my head. Got back to the car and chugged more tea and water and cranked up the AC, just drenched in sweat already. Despite the heat, I had been feeling pretty strong.

The start seemed to have every competitive runner in the area and several high school kids. I had run a 19:47 a few weeks back at the Capital City Safe 5k in the terrible heat, so I think I thought I could do better at this race- temps were slightly cooler and the course was flat. The problem is that I suffer from occasional delusions of grandeur where I think I’m fast, but in reality half the JV squad from any local high school would destroy me. So, instead of being conservative in the heat in the first mile, I decided to burn it. It didnt help everybody was flying with the gun. I felt pretty good in the first mile, and thought I was crushing some awesome sub 6 pace, but the mile clock brought me back into reality – 6:13.  About this time is when I started sucking some serious wind, and could feel a bad bonk coming on. I wanted to push the pace, but it just wasnt happening. I saw Angel  pull out of the race ahead, so this gave me a faint glimmer of hope of placing in my age group. The heat was killing me, and I was trying my best to dump water on my head every water station and hitting every sprinkler on the course. I think I got passed at this point by a few guys. Geary decided to pay me back for Capital City Safe and I never caught him. Second mile was rough – legs were cooperating but my lungs were protesting severely. Hit the 2 mile clock around 12:50ish but I was already dying pretty bad. Third mile was pretty much misery. Just tried to keep going and keep up with the pack that passed me in the 2nd mile. I could see Code Brown fading a bit but there was nothing left in the tank to make a surge. I hoped I could still notch a sub 20. The last turn I had marked at .39 miles, and you can see the finish the whole way, but there was not to be a blue shoes kick today. I saw the 19’s fade away  and I crossed the line in 20:03. Took me forever to stop gasping for air and I had to double fist the water. Right after the race a hellacious storm rolled in, so there was a pretty big delay before the awards. I knew I had a slim to none chance of getting an award and I almost left early with the storm coming. I decided to wait it out though, and much to my surprise I managed to pull out an age group 3rd place.  Top 30 all broke 20 minutes, so just a crazy deep field.