The Blue Ridge Relay is a 208 mile running relay from Grayson Highlands, VA (a state park near the southern border)  to Asheville, NC.  I’ve been wanting to do this race for some time,  as it was the inspiration for the Palmetto 200 relay I’ve done the last two years. Luckily Brian,  our fearless captain and master organizer of the Palmetto team, felt the same way and decided to field a team for the BRR this year. Most of us have to depend on guys like Brian because the amount of organization and planning for these things far exceeds my ability.

For the uninitiated, this relay has the 208 miles divided into 36 sections, or legs.  The legs range anywhere from 2.4 -10 miles, and are classified to their level of difficulty. There are easy, moderate, hard, very hard and for 2 legs “mountain goat hard“.  The usual team is composed of 12 members, each running 3 legs a piece. Total mileage for an individual runner on a full team is anywhere from 13-24 miles. There are also “ultra” teams, where there are six or less team members, each cranking out crazy amounts of miles, 36-50 on average. On the website there is reference to one guy who actually did the thing solo, which is impressive, and also absolutely, completely insane.

Our team, “Van on the Run” was supposed to be 12 members but a guy I recruited bailed at the absolute last second, leaving us with 11 members. I offer an apology to my friends that I barraged with frantic phone calls the day before the race, offering everything short of my first born child in return for their participation.  My anxiety about this was also selfish. The relay runners run in a set order- if there is an injury or no-show the missing runner is skipped (with the next runner running his leg), leaving an extra leg for runner 1 to complete at the end. In this case, having a no-show at the beginning meant he would be skipped 3 times, and runners 1,2 and 3 doing an extra leg at the end.  Of course, I was runner number one.

So we 11 headed up to Grayson Highlands State Park on the day before the race in 2 fifteen passenger vans packed to the gills with clothes, water, food, gatorade and just about every kind of distance running equipment imaginable.  I love to camp, but hadnt done it in 20+ years. In hindsight, it probably would have been best for me to get a hotel, because sleep is like gold before a 26 hour race. I came prepared to camp, but between the scary animal noises and 45 degree night, I was tossing and turning quite a bit. Maybe got a couple of hours tops. Still havent figured out what that loud meowing was at 3 am. 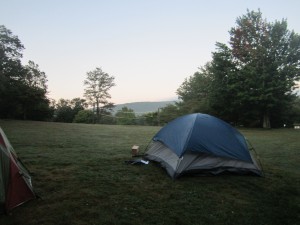 I got up at 6:30, already too anxious/excited to start the race. Relays are generally non-competitive events, but I think the pressure to not let the team down is even worse than our own drive to do well individually. Had to wait what seemed like forever for our 10:30 start time (Start times were staggered from 6:30 (slowest) to 1:30 (fastest) ) Lots of nervous energy, and too afraid to warm up, given the 21+ mountainous miles ahead of me in the next 24 hrs.

It was fun being the first runner, as I got to line up at the start, and as Mrs Diesel says, be a photo hog. There were about 10 of us in our wave, and the first leg as classified as “easy”. Four miles straight down the mountain. There is a certain feeling that you are racing the other teams in your wave, so I wanted to do well in the first leg, but I also needed to remember I now had 4 legs to run, and a whole lot more miles than I had originally bargained for.  All of this careful strategizing and consideration went out the window as soon as the gun sounded. Some unassuming short bearded guy goes rocketing off and I follow him like a rabid bear in pursuit of its prey.  Downhill is really not the word to describe this leg,  uncontrolled freefall is probably closer to the truth.  True to Newtons laws, once 190 lbs of beastly runner jacked up on caffeine gets going,  he tends to keep moving. Actually accelerating. Form going all to hell,  jackhammering my quads all the way down. I had originally planned on 7:15ish pace on this leg. First split: 6:04.  Bearded guy must of been the ghost of Prefontaine, he was probably a minute ahead already at this point. I actually wasnt breathing that hard but having a hard time keeping limbs from flailing and trying not to pound my legs into submission.  This kept on the whole way down, and I was actually thankful for a few spots of flat and slight rise. Hit successive splits in 6:16, 6:14 and a 6:04 kicker at the end, 24:14 total, 2nd in the wave for the leg.  Way to conserve your energy cool guy. They told me Mr Beard finished in under 20 minutes.

The other van left with our other six members (Brian “El Capitan”, his wife Jen “She-Hulk”, Amy, Rick,  Joel “Honey Badger”, and Whitney “Big Sexy”), at this point, leaving the five of us in Van 1: myself,  Dan “Thunder Dan”, Jon “Freight Train”, Garris “G” and David “D-Mac”.  Dan, probably our strongest runner, took off in a blast.  Unfortunately,  Dan’s intensity in running does not match his attention to yellow relay direction signs. We drove halfway through his leg and waited for him, but started to worry when half the teams on our wave passed. Just when we were about to jump in the van and find him, he came through. Apparently he took the wrong turn and went a mile off course into the driveway of a Virginia hillbilly, had to turn around and come all the way back, possibly setting the BRR record for F bombs on the course.  To his credit, he still finished ahead of some other runners, on a very hilly “hard” leg.  Freight Train took off after this and continued to crush the pace, despite the fact that his 4 legs now totaled exactly 26.2 miles, a marathon in the mountains.  Garris and David also blasted their legs, where we got the second taste of a “hard” leg. These were already looking tough, much worse than anything in Columbia. Garris’ leg ended with a climb worse than two blossom st hills at the governors cup.  At the end of David’s leg we met up with Van 2, where we passed the baton bracelet to Amy and then had a chance to rest for a few hours. At the van exchange, we met up with a grandmasters all star team of the OG, Drew Walker and Geary. They were the only other team I recognized, and they also had 11 members. 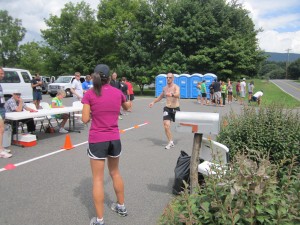 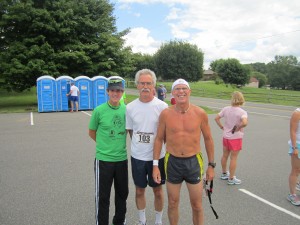