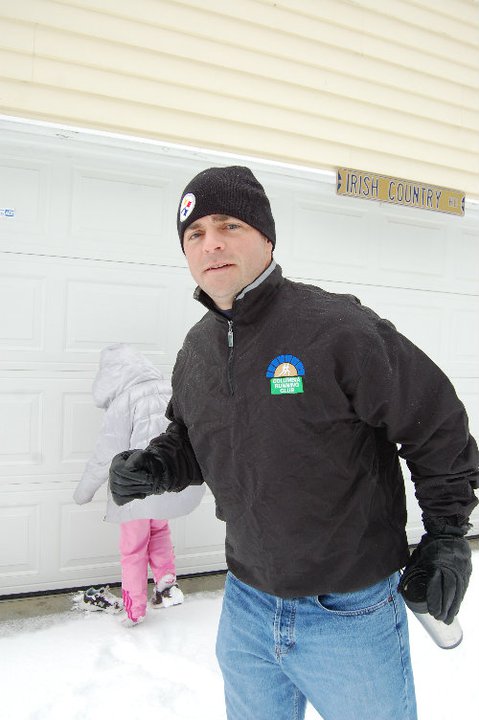 This is a post of the official Tour de Columbia event last weekend, the Poochapalooza 5k. Diesel wrote a report after I harassed him enough about it. Supposedly Trophy is his copy editor. The above photo references the fact that if the temperature is zero to 65 degrees, the black jacket will be on.

The Poochapalooza 5k is a first time race that is designed for runners to enjoy a race with their four legged companion.  All of the proceeds benefit PAALS and the Heartworm Project.  This race was part of the Columbia Running Club Tour de Columbia schedule.  The race ran through what I would consider a very hilly Lake Carolina .  Luckily for the runners that course bypassed a few of the bad areas of Lake Carolina .    It was pouring rain when we left for the race and it rained our whole ride there.  Over and over I was asked why I signed her up to run and the continuous questions gave me the opportunity to use my favorite running line on her.  SHUT UP AND RUN.  Once we arrived the rain went away and the temp warmed up just a little.

Mrs Diesel is on a mission for a  black jacket of her own. Apparently Trophy has been coaching her attitude though. That being said I was very glad my race started later that morning with the cold and rain.

As some of you know, I am not an animal lover but it appeared that the majority of the 51 runners were serious dog lovers.

“Not an animal lover” – understatement of the year . Diesel needs a Valium every time a dog barks at him on our marathon training runs.

There were dogs of all sizes and seeing all the yard darts and fresh yellow puddles gave me the opportunity to explain to the Mini Diesel crew why we do not and will not own a four legged animal.  I was on camera/kid duty since Mrs. Diesel’s agent had scheduled her to race again on this nice and cold rainy weekend.  With this being a Tour de Columbia points race I assumed there would be some fast runners showing but I also figured with so many other races going on the same day that some runners may bypass this event for a flatter and faster course.  As I scanned the crowd, only a few face faces stood out to me.  Greg Howell and Teo Gamishev were there supporting the TDC, Ted Hewitt that I noticed at Bazaar Bazaar a few weeks ago and a training partner of mine Charley Clements .  Charley was there running with Winston aka Demon Dog.  I will go on record to say that this might be the world’s happiest and fastest dog.

Winston gets up every Sunday and pulls sub 8 pace with a big smile on his face, while we all complain the whole way. He is a machine.

Sarah Blackwell and Laura Howell were the only females that I recognized outside of Mrs. Diesel.  The Mini Diesel crew have started attending races on a regular basis and they always ask me who I think is going to win the race.  I told them that Code Brown, Blue Shoes and Kong all got scared and went to the airport for a flat and fast course so my winning vote was going to Mr. Greg followed by Teo.  I also told them that their mom should hopefully come in 2nd overall female behind Sarah and her dog.  I do not consider myself the brightest bulb on the tree but that theory was proven wrong at the start of the race.

I would have thought the same thing. Greg pulls consistent low 20’s, Teo goes low 21s or high 20’s. Little did we know that Charley may have finally found his faster gear.

I told the kids that I did not think “dog races” were smart and sure enough, at the start of the race there was a NASCAR style pileup and one runner went down.  My kids and other runners noticed it but I was too busy snapping pictures for it to sink in.  The lady was still attached to the leash and her dog appeared to be pulling her like he was a boat and she was a boogie board.  The husband circled back, took the leash handoff and left his wife for dead.  For that I give an Atta Boy.

Total Blue Shoes mentality. A similar thing happened at the March for Meals 5k – a kid bit it at the first turn. My first responder trained reaction: high step over him at sub 6 pace. Fair warning as well as to any ipod wearing older women, strollers, dogs, and walkers that line up near the front. – be prepared to be mowed down.

At this time I noticed I had not seen Charley and Winston go by.  I knew he had gone on a warm up so I figured I had just missed him.  I was wrong.  Charley missed the start of the race and was about 30 seconds behind the walkers when he finally crossed the start line.  He did not look very happy when he passed but I think those bad thoughts passed by the end of the race.

Ive seriously had nightmares about this same situation.

The kids and I positioned ourselves so that we could see the runners as the came around the final turn towards the home stretch.  As the cop car approached I told the kids to be looking for the PR or ER shirt worn by Mr. Greg.  Sure enough…..there he was.  Greg Howell won the race and crossed the finished line with a time of 20:12.  I assumed Teo would be rounding the turn next but it was a pleasant surprise to see Winston rounding the turn pulling Charley.  Winston crossed the finish line at 21:19 followed by Charley at 21:20.  The most amazing part of this is Charley was able to start the race about 30 seconds behind and still manage to pass 49 of the runners to place 2nd overall.  This was a PR for Charley.  Charley was followed closely by Teo with a 21:35, Ted Hewitt with a 21:41 and David Hale with a 21:50.  Sarah Blackwell took overall female with a time of 23:42 and Mrs. Diesel followed closely behind with a 2nd overall female finishing time of 24:50.  Laura Howell came in 13th and was able to take home 1st in her age group.  Congrats to everyone that pulled points for the Tour de Columbia.

Glad to see Greg take home his first victory. We age groupers pray for a day like this, when all the super fast guys go elsewhere and leave us an opportunity for glory. A big day for Charley and Mrs Diesel as well. Charley runs faster than me in training, so I imagine he still has even more room to improve that PR. If he hadnt started late he might have given Greg a run for his money. Mrs Diesel has been pulling PR times left and right recently, so her man better watch his back. Nice report Diesel.