Cold Winters Day is the year end 5k put on by Strictly Running, a companion race to their Hot Summer Night race in August.  I guess because its a race “for runners by runners” that it brings out some hardcore competetion. The prize money probably helps too. I always think of this race as a benchmark for my racing, since its the last race of the year and was my first 5k in Columbia back in December 2008.  I PR’d in that race with a 23:59 (my 4th race ever and first in over a year after my shin splint nightmare of ’08)  and about died in the process. I saw a turn in the distance and kicked it in hard, thinking it was the finish line. Turns out it was the last turn…about  three quarters of a mile from the finish line though. So handsome:

Part three was last year, still in the wake of Richmond and in driving sleet. I was less than happy with the time (19:47) but glad to vindicate the ugly finishes of the last two years. Thug life: 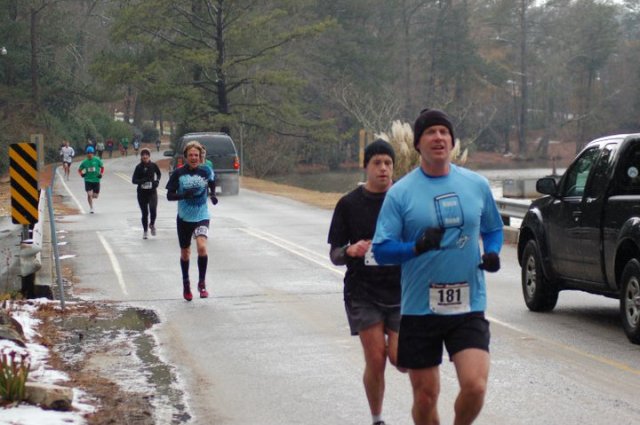 Which brings us to race #4, this year.  My legs are still a bit flat from JAX, but I felt I could at least beat the 19:47 and hopefully go sub 19:30. Temps were crazy warm, low 60’s at 10 am. No need for my thug hat this year. Everybody and their mom decided to run this race – place was packed. Packed and stacked, actually, like a proverbial all-star game for distance running in SC. Beasts in every direction. Some guys in singlets that looked like they might suit up in London this summer.

I should mention this course is billed by Selwyn as “flat and fast”.  This is perhaps the most delusional statement I’ve ever heard, and in my line of work, thats saying something. There is a bridge over a dam that is flat for a few tenths of a mile. The rest is constantly rolling hills. The start has a nasty quarter mile incline which sucks the life out of you, and then the roller coaster begins. There is a nice screaming downhill finish though, which would help you kick, if you happen to have any life in your lower extremities or anything resembling the efficient exchange of oxygen for CO2.

I lined up at least 4-5 rows back in an attempt not to get run over by the sub 17 crowd at the front. There was a start mat, which made this OK.  New bibs with a disposable chip on the back were being used instead of the usual plastic shoe chips. The start was insane. Very herd of cattle-esque. Did some dodging and almost got run over by some overzealous dude who im sure finished like 5 minutes behind me. But hey, lets all sprint from the start like a pack of first graders. The first stretch is uphill on Trenholm Rd and I was trying my best to keep up with Tigs and Greg. Billy Tisdale had already gapped me by probably 15 sec a quarter of a mile in.  Suddenly Tigs slowed and she said she was already feeling bad. The most of the next half mile is downhill, and I tried my best to power down it.  You’d think the potential energy of my 195 pound Sasquatch self would be significant, like an 18 wheeler among a bunch of Corollas, but whatever Im doing on the downgrades isnt quite being transmitted into speed. Its probably all the head flopping and arm flailing. I was able to make up some ground on the ensuing uphill and had the feeling like I was pushing an almost 6 flat mile.  But, when I looked for the mile clock it was already at 6:09, and I didnt cross the marker until 6:26. This pretty much started my usual siege of thoughts of wanting to drop out in the first mile if everything isnt going my way. It didnt help that Greg and Billy were absolutely, positively kicking my ass.  Another downhill in mile 2, and I decided to attack it, incorporating some race whispering that Geary had given me about the declines. He’s had plenty of chance to observe my form since he’s always either right in front or back of me. After a flat stretch over the dam comes the most brutal hill, a long slow quarter mile slog.  Derek Gomez, who is back from tri season, comes blowing past like he’d missed the start. Geary apparently also got tired of observing my headless chicken form and also passed me at the bottom of the hill.  I just latched on Geary and Derek and tried to keep up. I finally figured out that the other guy drafting on me was Will Brumbach, who doesnt race that much but is always right around the same 5k time. Having someone to pace against seemed to settle my earlier negative nancy grumblings and settled my breathing a little. I apparently zoned out because I was startled by the 2 mile clock that was at 12:20ish. Hold the phone.  Garmin spit back a 6:00 split and confirmed the half-delirious math I was trying to do in my head. So my race wasnt completely in the can. With a mile to go I tried to ramp up the pace some, but the lungs and legs were not really having it. I had a little bit of a lift though when I reached my 2008 faux finish and knew it was straight to the end. I had made up some ground on Greg, and basically a pack had formed with him, Geary, Billy, Derek…and wait a second. Is that the freaking Code?? Was this was my chance to outkick the man responsible for taking away my precious TDC agre group title?? Just when I was in striking distance, the “E” light comes on my gas tank.  Engine was starting to fail. Just no kick left this time. Plus the Code seemed to sense the aura of the blue shoes, or could perhaps hear the sound of my footsteps, reminiscent of the zombie apocalypse.  Whatever the case the whole pack finished ahead of me, and some random joker blue shoed me in the final 50 meters. Ouch. A taste of my own medicine. Crossed in 19:25 or something. Not a bad time for me. I knew I would be nowhere in the same zip code of an age group placement. It was a 20 second course record for me.  Greg is learning well from his Jedi master Anton and crushed a 30 second PR. That is just insane. Most of us are just chipping away at seconds by the time you get sub 20. The Bodourov method is strong with this one.

There was a problem with the bib chips, so a lot of us, including myself, didnt initially get times. They do have some results up now – I got a 19:28 officially, though this is probably a gun time.  Tenacious J and J-Reeves had some of the most impressive individual times, both crushing big PR’s. The womens race was crazy close, with Amy, Kathryn Ashton, Sunday Davis and Christina Sliepka all finishing within 3 seconds. The top 56 went sub 20. Absolutely nuts. I finished 18th last year with a 19:47, my faster time this year finished 51st.

http://connect.garmin.com/activity/137961828  (Hit the button by mistake after my cooldown)