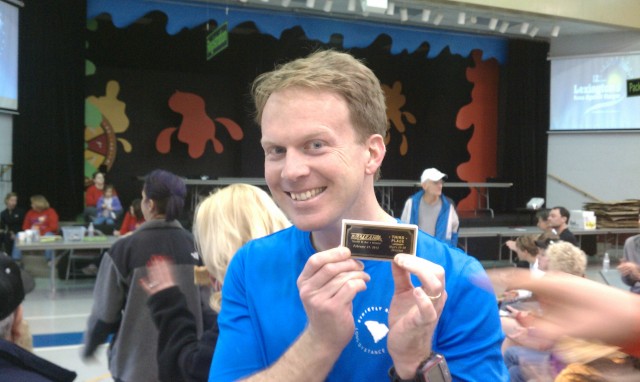 The Lexington Race Against Hunger 10k (http://www.lexrah.org/d/)  is one of the bigger races of the year and usually brings out a pretty competitive crowd. This was my 3rd time running the race, and it was one of my first 10ks ever back in 2010. I’ve usually shied away from the 10k distance. For some reason I have trouble with the pacing. My 5ks are easy – I basically just blast off like a scalded chicken and hope not to die in the ensuing 20 (or hopefully less) minutes. Half marathons are long enough to make you respect the distance and run a pace way under anything painful. Running a fast1ok, though, seems to require a period of prolonged suffering that I’m just not too keen on. It could also be my Dam Run 10k in 2010, where I had a brief psychotic episode in which I thought I was as fast as Amy or Megan, chased them for about a mile at 6:18, and then suffered one of the most epic death marches ever for the remaining 5 miles.  Just ask Tigs, who passed me in the last half mile and thought I might need medical attention. Total PTSD from that race, almost on par with that unmentionable race in Virginia’s capital.  This race  played out in a similar fashion in 2011, but not because I went out too fast. For whatever reason, my legs turned into cinder blocks during the hilly section (i.e. the entire miles 2-5), I got passed by about 50 people and was briefly Schmitzed, then recovered in time to blast out a decent last mile en route to a 43:32.

I had fairly high hopes of running a significantly faster race this year. Since ramping up my weekly miles to 40+ in the past 2-3 months, along with regular “Dr Pain’s  miles of smiles” speedwork sessions with Mobile Bar owner Jeff Burgess, I’ve set PRs in every distance from the 5k to the marathon. In any case, I hoped to definitely lower my course record (43:18) and maybe take out my fairly soft 10k PR (42:05 from this year’s Red Nose Run). I note a course record here because this little jaunt through Lexington is anything but flat. Sure, the first mile is a nice fairly level trip down highway 378, but it then turns left into about three quarters of a mile of rolling hills. Just before the mile 2 mark you will have your spirit crushed by a mountain that, while not the steepest, kills you slowly for the next half mile. After the sweet release of death seems like a viable option at the summit,  you get the distinct pleasure of slogging up a few more quad destroying inclines before a right turn on Roberts St, which finally starts bringing you back home. The worst of the hills are over by then, though there’s definitely still a slight incline going on. It wouldnt be that noticable, save for the fact your lower body is begging for mercy by then. After the mile 4 marker, the course finally levels out and mercifully gives you  a few declines. Last mile is that same stretch of 378, except more downhill, which gives a chance for a nice kick if you have any life left.

I got to the race about an hour early. Did a couple of slow miles with the Code. Trophy was nowhere to be seen, and the Howells were still in recovery mode, which apparently involves a steady intake of margaritas. Spencer was in Florida but still doing a 5k this morning. Anton was home devising more ways to torture Greg and making the Bodourov method even more evil. Diesel decided he would take this opportunity to shred his IT band a little more after Myrtle Beach. Schmitzes were there to do the 10k in the middle of a 20 miler, as was Rick. Geary, Amy, the two Drew W’s,  Flicker, J-Reeves and J-Cov (both doing the 5k with Jenn’s daughter)  and both Brandenburgs were all in attendance. Justin, the newest member of the Cola running scene, was one of the few people to show up who could win the race. Strictly Running had lot of their sponsored guys last year do this race, including Tim Jeffrey’s crazy fast sub 34, but none of them were there this time. It was a little sad as one of my memories from last years race was EK Tolley-Beeson finishing during my cooldown, with a big smile on her face. She passed away this week at age 75.

The start was at 8:20 and pretty cold, made worse by a nasty headwind. With the gun I quickly latched on to whoever I could find to get out of the wind. Unfortunately, save for Schmitz,  no one’s going to block all the wind for my sasquatch-sized self.  I was able to trail Flicker for a while but the dude was out on a mission and I couldnt hang. I figured I’d get him later – the age group was pretty wide open with all the top dogs sitting this one out. The Code said this was going to be a tempo run for him in prep for the Columbia Half, and he was going to try for 6:40 pace. He pulled up beside me and we hit the mile mark pretty close at 6:44. I was very glad at this point to get out of the wind, because, if youve ever seen me in person, you know I’m less than sleekly aerodynamic. We got to trade in the wind for hills at this point, and maintained a pretty good pace on the rollercoaster-eque next .75.  Stayed pretty constant with the field. Thomas Tapp and Geary were just behind us at this point. Brandenburg was in another zip code, and from what I could see from 378, Justin was going to make this race a walk in the park for him.

Then came the mountain. You know its bad when there’s cute motivational phrases written on the pavement by the organizers to try and get you through it. Code separated from me even though I was trying my best to keep up.  This hill is so freaking long, makes you want to cry. I could feel myself starting to unconsciously start to take on my 75 year old man posture, and a fair amount of head bobbing and wind sucking ensued. I did hit mile 2 at 6:32, which was encouraging, if I wasnt actually pulling about 7:32 or worse pace at that time. Finally made it to the top, and still had the Code fairly close. Flicker was still crushing it though. Although I always remember the mountain, I seem to block out the next section of more hills, perhaps because its more than my fragile psyche can take. These suck anyway, but once your quads are already taking a lactic acid bath from Mt Lexington, it really hurts. I swear I made the turn at Roberts St at like 10 minute pace, because my lower body was trying to dissociate from the quad burn that had been going on for the past mile and a half. Hit the 3 mile at 20:26 by the caller. I didnt want to look at my pace but the Garmin beeped and I instinctively saw the 6:52, which was mildly encouraging. Mile 4 was just rough. Its still slightly uphill, plus you run by the finish line of the Jailbreak 5k. This is typically where I have trouble in 10ks – I just lose focus and have a hard time maintaining pace. As I started to slack though, Geary comes up right beside me and starts to pass. My fragile ego cant take it, so I decide to latch on. I think this was probably key for both of us, since we both run almost the exact same times. He was definitely pushing it, but I was surprisingly able to match it. I think I finally processed some of the lactic acid bath. Unfortunately my let down led to a much slower 7:09 split for mile 4, but with the pickup I hit a 6:30 for the next mile with Geary just a step behind me. Like last year, I had a burst of energy at this point, knowing the rest of the course to be flat to downhill. Plus, there was Code for the taking, maybe 50 meters ahead. I started blasting it as hard as I could, passing by some suspiciously 35-39 looking gentlemen in the first quarter mile after the mile 5 marker. And there was Code. No way I could let him beat me when he was out for a freaking tempo, right?  I prepared for him to start racing once he heard my cattle stampede footfalls, but he just let me pass. Flicker was ahead and finally seemed to be slowing maybe, but I think it was just me basically sprinting. I hit mile 6 at 6:09 and I was sucking some serious wind. I ramped up the pace another notch but Flicker must of been crushing some pace of his own – I just wasnt making much headway even with some 5:30ish action going on.  I finally made out the clock turning over to 41 and was able to sprint out to a 41:24 finish. Ten seconds behind Flicker and eight behind the 3rd place female, who again was Theresa Penney (see Red Nose Run).  Ended up 17th overall and 3rd in age group, so pretty happy with that given this competitive field.  Chopped a whole 41 seconds off the 10k PR too, which was nice. Still have some work to do to get the 10k in the ballpark of what my 5k would predict, but I’ll take it on this tough course.

Justin, as I could see less than a mile in, crushed the field with a 34:47.  Amy won the female overall with a 39:55, beating out Theresa and the girl who chicked me at Race for the Cure, Claudia Nunez-Lopez. Brandenburg won masters in an impressive 39:09 – would have taken down Anton’s time from last year? Uh oh. Aubrey ran a 38:55 and only won his age group by 5 minutes. Slacker. He did get the shame of being named first female at the awards ceremony though. Doh!  Drew Williams took down JB en route to a sub 39 as well. Phil Midden won my age group finishing just under 40. Geary easily won his age group at 42:00, with Mike Ufford finishing 3rd.  Kristin won 2nd in age group on the tempo part of her 20 miler. Wish I could do that. Then again, maybe that’s why she’ll be in Boston in April.