Obviously I couldn’t run the Palmetto Half and do the Palmetto 200 at the same time. I finished leg 3 at 6:50 am, which would have given me 10 minutes to get to Northeast Columbia from Mount Pleasant. So Trophy said he’d write a guest blog entry for me. Here it is:

The Palmetto Half is a half marathon running out of Sandhills on the Northeast side of town.  This is only the 3rd year for this race, but it has grown in popularity and this year had 933 finishers.  There is also a 5K the same morning that managed 401 finishers.  400 finishers is a good race when there is only a 5K, much less when a accompanying a half.  The race director is Ken Calcutt , a good friend, running companion, and an honorary captain of our weekend running group.  He and his staff have done a wonderful job with this race, which is probably why it is so popular. It falls on a busy time of the year, with some of the faster people going to Boston , and some of the more hardcore and crazy people running the Palmetto 200 relay.  I have nothing but rave reviews for this race. It is very well organized and I have no complaints. The awards this year were quite unique. Maybe someone that reads this who actually got one could send a photo to Alex?!?  Obviously, I did not!

3rd place in our age group was 1:29:26 , and about a minute south of my PR, so I doubt I would have gotten any glory either.

The race starts at the Plex and runs out along Clemson road to Two Notch, then back behind Target and into Wildewood. There are a few hills scattered throughout, but overall not a bad course.  As many people know, I hate the heat, and due to the recent hot temps….I was praying for some cool numbers on race day.  Thankfully, we had it perfect.  I believe it was high 40’s at race time.  Hard to ask for better.  I got there pretty early and did some socializing as usual.  Right away I saw some of the faster people…..Plexico…Frank.  Heard rumors of a coach from CIU trying to go 1:12 I think.  Hmmm….too fast for me!  Amy showed up and figured she was a good bet to win overall female, as she has been smoking it lately and running wonderful!  We had a good turn out from our weekend running group, all showing up for a nice race and to support our leader Ken.  Charley, Jon, Nathan, Mark, Heath, and Buckle Up….who provided support with the cones.  He did a fine job with those!

Except for that traitor Blue Shoes.  At least Buckle Up didnt go rogue at Ken’s race – he’s setting TDC world records in banditing.

Race started and I settled in with Burgess to try to pace a 1:33 or so….a goal for both of us.  I have run 3 of my last 4 half marathons in 1:34….surprising consistency from me. We got to the top of Clemson and could see below that Jud and Ryan were already quite a ways ahead of us. Machines.  The race for us was rather uneventful.  We maintained a pace right on target for most of the race…attacking the downhills and resting on uphills.  Jeff and I caught up to Karen Manning and she joined our jolly group for the majority of the race. We ran and Jeff provided very entertaining thoughts and commentary the majority of the time.  You would think this would wear him out, but him and Karen still managed to drop me on the nasty hill on Valhalla .

What’s all this talking? Burgess needs to lay off his blabbing and go for the glory. At least he didn’t get Trophied.

I have checked quite a few times with our race director, and he has not been successful with removing this hill from the course. Sorry guys…I tried.  I finally got back on Two Notch and this is a good stretch to make up some ground. I found some more in me and started hitting some sub 7’s down this mile or so.  Good pace for me at this point, and was able to pass Karen again.

Trophy cant push the pace unless he’s about to get masters chicked.

Unfortunately Burgess apparently had the same idea as me, and I was unable to make up any ground.  I struggled up the overpass (again, unable to get this part off the race) and started speeding up towards the end. The finish in my opinion is a good one. A little downhill into the middle of Sandhills.  The finish is lined with people cheering you on….a good feeling at the end of 13 miles.  I caught up to someone with about .1 to go and we raced to the finish!  I was just able to edge him out.  Burgess had remained strong and managed to best me by about 20 or so seconds. After they posted the chip time I did some research and I bested Governors Cup, my previous PR, by .15 seconds. Yes…..that is .15.  Can’t say I’m not consistent! 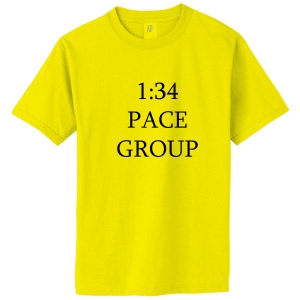 Insanely fast times in this race

Shout out to those who endured the high temps in Boston .  Any finish at all was a good one. Also a shout out to the Palmetto 200 team “Van on the Run”.  Great job to all of you!

I’m hoping the 200 won’t interfere with this race next year.

As my races have been limited, and my times pathetic, I welcome the chance to at least make a guest appearance on what is definitely the best blog I have ever read (don’t read any others) J.  I, like most of you I am sure, look forward to what our friend the race freak/CRC President has to say each week.  He is nothing if not entertaining and informative!   Trophy signing out.  Run happy my friends.

I paid him to say that. Excellent post, if lacking in my usual flagrant grandiosity and ridiculous detail.