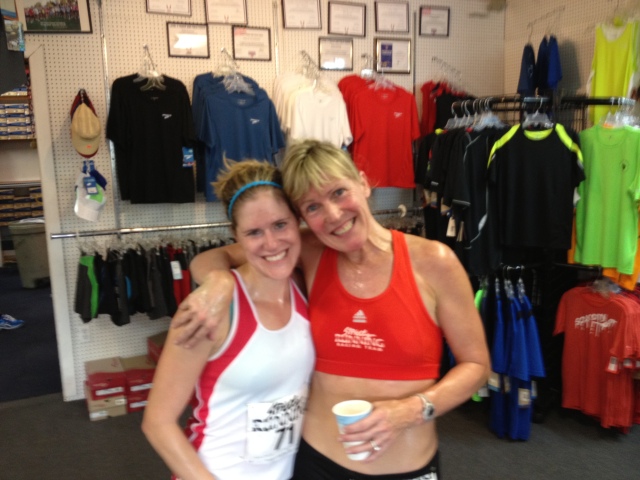 The Harden St downhill mile is the first of what will hopefully be three mile races descending into 5 points from various streets , ending at Strictly Running. Jordan Lybrand had talked about this at the last Columbia Run Club meeting, so we were able to add the series to the Tour de Columbia , which was promising for a decent crowd and good competition.

Although I love the mile and really want to lower my time, since I think I’m capable of better,  my original plan was to use the race to introduce little Alex, aka Blue Shoes Jr., to racing. I figured he could definitely do the distance and the downhill would help him get a decent time.

What I hadnt planned on was the heat. Sure,  late June in Columbia is not going to be chilly, but I figured it would be in the 80’s tops.  What I hadnt counted on was that this was THE HOTTEST DAY IN COLUMBIA EVER.  Seriously.  In a city whose slogan is “famously hot”.  As in a high of 109 degrees and temps still over 100 at race time.  Since heat stroke probably wouldnt give little Alex a great intro into racing, I scratched him from the race a couple hours before. He was so torn up about it he could barely manage a “thats OK” between a lego light saber battle on the Wii.

It then dawned on me that I’d be doing the race alone, and would have no excuse to run at 12 minute pace like I had planned. Yes, I could have used some restraint and just ran a tempo pace, but my figuratively and literally giant sized head wouldnt allow it. I pin that bib on and its GAME ON.  So what had been a relaxing Friday afternoon turned into a ball of pre-race anxiety over the heat and the inevitable suffering that would ensue. Can’t you tell why I love my sport?

I got to Strictly about an hour early only to learn the packet pickup was actually at the start, a mile down the road.  Just the walk from my car covered me in sweat. Total oven. Once at the start I debated just parking there and hanging out in the AC for a half hour, but then I thought about having to run back uphill in the heat after the race, so I opted for going back to the store. Jogged up to the start with Meg, who was racing the mile for the first time since high school in the mid 90’s. Ran into Diesel on the way, who had Diesel Jr in tow, ready to give the second generation of blue shoes a beatdown. Had to disappoint him with the no-show.  By the time I got to the start I was just drenched, wiped out after a 10 minute jog up the hill. The start area was kind of comical because everyone was congregated across the street in the only available shade.

I looked around and realized I knew over half the field, because this race was for the hardcore. The mile doesnt usually bring out a casual runner crowd anyway, but if you add  some 100 degree weather, only the obsessive show up. I might meet that description. Team Schmitz, John Richards, Teo, Rocky, Jennifer Lybrand, J-Reeves, Pete O’Boyle, Eric McMichael, Drews Williams and Soltau, Justin Bishop, OJ , Team Allers, Kenzie, Team Vowles and the Hewitts were some of the familiar faces. Only about 70 runners, but a super competitive field.

Course was straight down Harden, a little flat to rolling terrain at the top then a long descent into 5 points with a flat area for a couple of blocks at the end.  Strictly was offering 100 bucks to the first male under 4:20 and female under 5:20. No worry about me taking home any cash, but previous 100 dollar winner Kenzie was there to try and double up.  Bishop and a few other singlet dudes looked like they may have a chance, though.

I didnt really have a strategy for this race. Im sure coaches could wax poetic about the finer points of mile tactics, but my plan usually is to go out like a headless chicken, hold on, and race face it at the end. I dont think Running Times will be calling me anytime soon.

Start was crazy fast with all the sub 5 ers around. McMichael, who I identified as my main age group competition, took off like Usain Bolt and left me for dead. Without the regular warm up, plus no rest in training, made for a rough first quarter. I hadnt blasted any speedwork the last couple of weeks, so running mile pace felt like a sprint. I felt way back in the pack with all the speedsters, and it hurt my giant head.  The voices that usually whisper for me to stop in 5ks were now screaming. Into the second quarter I  felt better, surprisingly strong, especially with the downhill coming up. Invisible to the untrained eye, the Blue Shoes did get a little less Clydesdale-esque with all the tri training. I passed a few guys including one who dropped his key and had to stop and go back.  Meg, who had blasted out of the gates, was starting to get reeled back in, so I tried to pace by her.  I used the beginning of the downhill to make up some ground, because it turns out a boulder has more potential energy than a pebble on a hill. Although the legs were feeling strong, all of a sudden my lungs and throat started burning – really kind of alarming. I’m guessing the killer heat and the poor air quality from a fire in Cayce were combining to sandblast everything inside my chest. Passing by one of the cop cars also produced a wake of oven-like air that about killed me too. I finally reached Meg when the hill leveled out some and was able to pass her. After that was a pretty big gap so I ran the last quarter essentially by myself. I had no idea how fast I was going until I made out the clock at 5:10 or so, which was encouraging because I was afraid of being a lot slower. Tried to muster a kick,  but the burning lungs werent really helping. Kicked it in just enough to break 5:30, crossing at 5:29. Four seconds slower than my last mile, though it was about 30 degrees cooler then.  Ended up in 17th place, 3rd in AG if you take out OJ to the overall (2nd) . Just an insanely fast group.

Ended up with 9 sub 5 finishers, led by Drew Harris at 4:22. Bishop was upset with his 3rd place 4:28, but that is still pretty smoking fast.  The Drews finished in 5:04 and 05, so great races for them. McMichael again proved his dominance in the shorter distances with a 5:15, almost catching Eric Allers at 5:13.  Kenzie won another 100 bucks by winning the women’s race, clocking a 5:18.  I was wise to kick it in, because I had a pretty potent chase pack with Geary, Meg, Pete and Tigs all sub 5:50. J-Lybrand and Kristin both PRd I beleive with a 6:16 and 6:31 respectively. The Vowles definitely won fastest family, with mom, dad and son all finishing under 6:45. Diesel Jr would have destroyed the Blue Shoes Jr with an 8:10.   J-Reeves had to be coaxed out of a brief walk of shame, but still kicked it in to clock under 10 minutes.