This is my first time doing this 5k, which  I think is at least in its 2nd year. The race is tied to the Harborside Lights Festival – a Christmas themed evening event at the Lake Carolina town center.

I admit I was a little wary of this race.  One, some “festival” races are like some afterthought someone on the event planning committee brought up. These are the ones where the course is uncertified and barely marked,  starts late,  lame awards, etc, etc. Luckily this was NOT one of those.

Two, Lake Carolina.  Its pretty much a mountain range. With lots of traffic. There’s no way to shut down the roads in the neighborhood because, well, people have to get home. So any race here is necessarily going to have open streets. Plus, texting soccer moms in SUVs will mow you down in a heartbeat. This race did a great job with the traffic from what I could see – which is amazing considering it was on a  Friday night, just after rush hour, in prime Christmas shopping season.

This is part I of my scheduled double dip for this weekend, with Main Street Crit tomorrow.  I came straight from work and showed up about an hour early. Ran the first loop of the course with Geary and Ted. This course is one I had never run before – it plunges downhill from the Town Center, all the way to the lake in Harborside. At the bottom of the hill, you go right back up the long incline, take a right and get a nice downhill again. This is only a brief respite, as you then have to scale a 3/4 mile mountain for the second loop. Finish is coming back down, but then you have that little downhill break in reverse right before the finish. I think the course is certified, but its certainly a bit long by Garmin (3.17 is even included in the course map)

Hard to get a read on the size of the race in the dark, but seemed like a decent crowd for a small race. Over 100 for sure. Brandenburg and Yerger showed up, giving me limited trophy chances. Ted, Henry Holt, Rocky, Colleen Vowles, J-Reeves, Valerie Selby, Ponamarev, Geary, Barb Brandenburg and Michael Jensen were some of the CRC peeps to show up. The Howells and Diesels were in attendance as spectators – weak!  No clear winner from what I could tell at the start, though there were quite a few high school kids that were wildcards.

Start was fast. I had lined up first row but was getting mobbed in the first 100 meters. Some guy even more Clydesdalish than myself comes barreling past me like its a 400 meter race.  So inevitably a half mile in there’s lots of roadkill to be had. Rob and JB are running together just ahead, so I surge a bit to put myself about 20 meters back.  First mile is mostly downhill to the lake, so I try my best not to flop all over the place like I usually do. Still feeling pretty good but dreading what I know is coming. First mile was in 5:59, smoking for me but mostly due to the downhill. We run a block by the lake then right back up the hill. Wind sucking commences. Ive freed myself from the main pack and had passed a bunch of high schoolers, but there’s still this tiny girl in front of me who is just crushing it. Turns out it may be easier to lift 90 pounds up a hill than 190.  Go figure.

I finally finish the harborside loop and im a little afraid to blast on to Lake Carolina drive. They have the intersection well blocked off, but there’s cars everywhere. Next is that brief freefall, which at least lets me breathe a little easier. Still about the same gap with Rob and JB.  Tiny girl still has a few steps on me too. The mountain sucked. Not terribly steep,  just long.  We turn into a subdivision for the end of the loop, which I think will be a break but its an extra BONUS hill. Awesome. By the top my heartrate’s like 2000 but at least the quads of steel are holding up. Mile 2 is like 6:30. I round the turn like I’m in Olympic stadium and start crushing the downhill. Halfway down I’m side by side with Tiny Girl but she is not giving up easily. We are right next to a long line of cars , and despite my natural tendency to want to pull a stiff arm and blast out in front, I figure that’s poor form with a middle school girl. I’m such a gentleman. After the bottleneck of cars I finally do get a chance to break free and chase the Yerger/JB tandem. Yerger is sensing the finish and has started to put the beatdown on the Brandenburg. Some volunteer guy suddenly starts running beside me and Seabiscuiting me to the finish.  I dont think I know him, but its dark and my brain is more focused on remaining conscious with such limited oxygen. Last hill is a killer but I’m starting to close on JB.  Last turn and I make out the clock at about 19:10 or so.  Time for some blue shoes. Ramped up some sub 5 pace and crossed in 19:35, five seconds behind JB and eleven behind the Yergs.  Good for 4th overall, 2nd in AG behind Rob. 3.17 miles on the Garmin. I’ll take it, especially with the hillfest and the long course.

Turns out we were all left in the dust by a high school guy Michael Egbert, who was so far ahead I never saw him past the first half mile. Second was Rob, Third JB. Fifth was the Tiny Girl, Claudia Cannon, who is all of 13. Yes, I nearly got chicked by a seventh grader. Nice work, Claudia. Geary finished 6th in a shade over 20. Ted and Michael Jensen went 1-2 in the 40-44 AG. Colleen Vowles, locked into an epic battle for the TdC 35-39 with Sarah Blackwell, scored a PR of 22:49 on this tough course and finished 2nd in  AG. Maybe a battle royale at Rudolph’s Rampage? The missus Brandenburg barely won her AG by five minutes in 23:23.  Valerie, Ponamarev, Henry and Rocky also all placed in AG. 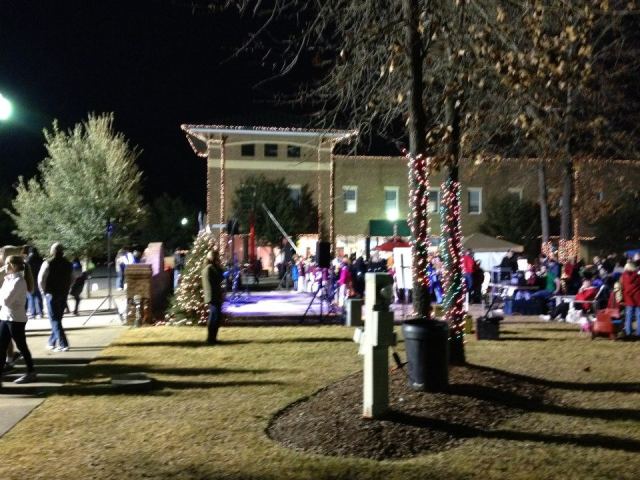 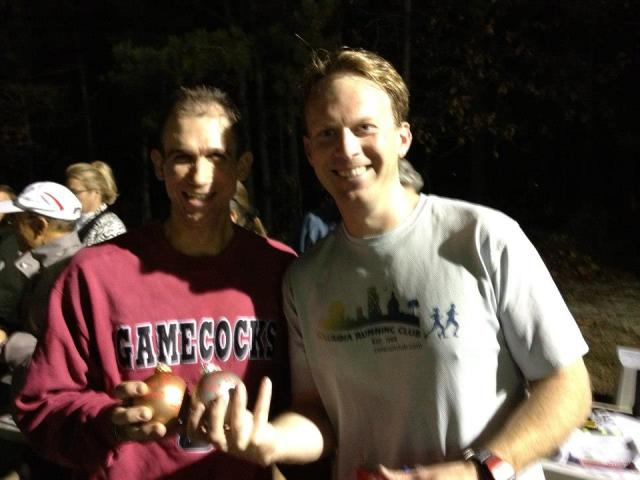 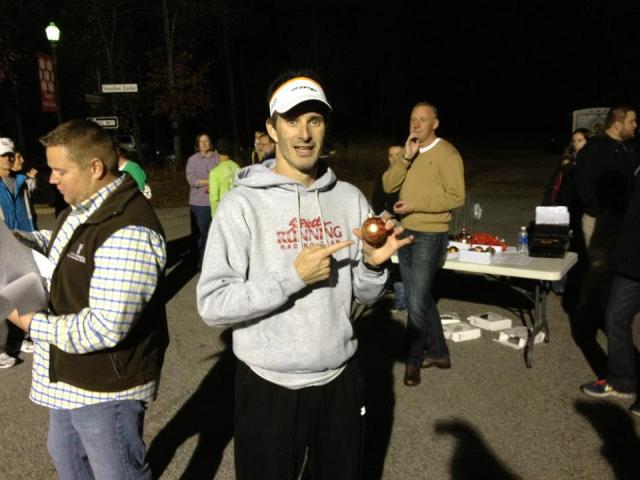 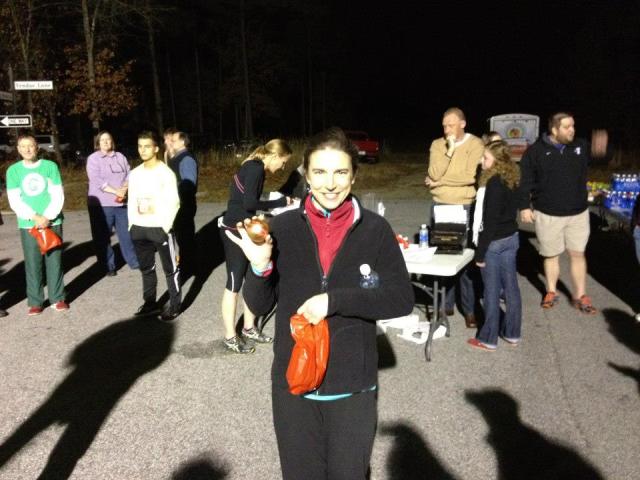 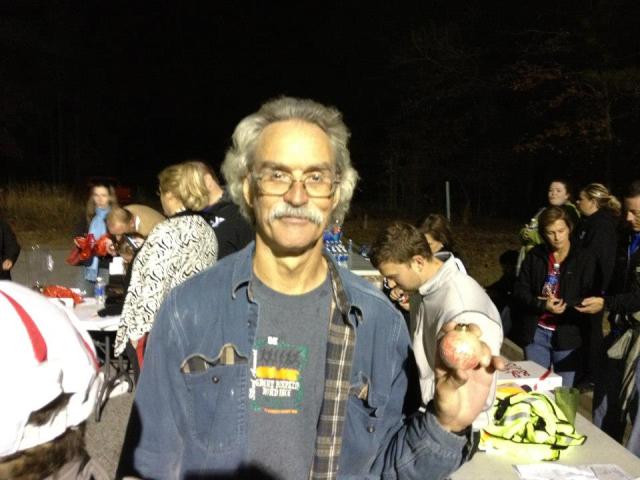 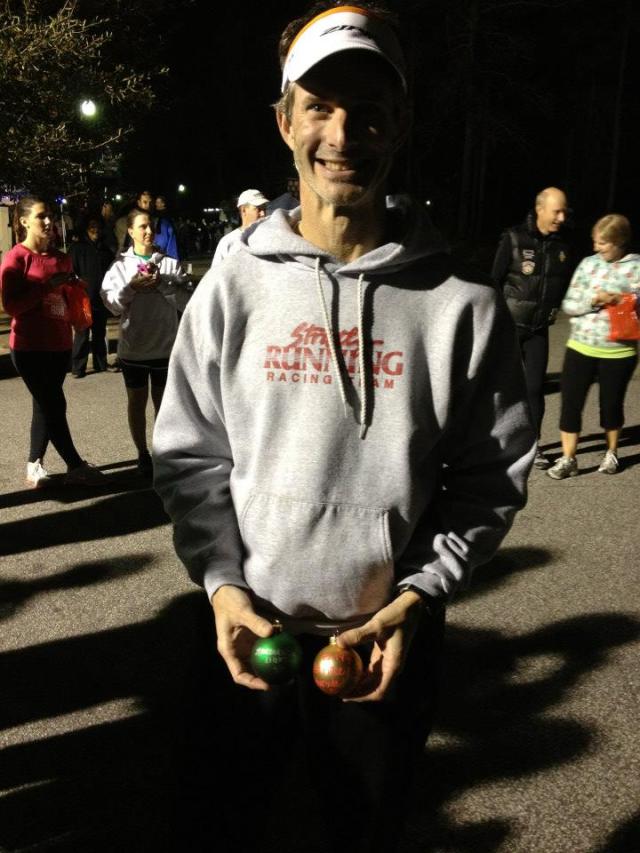