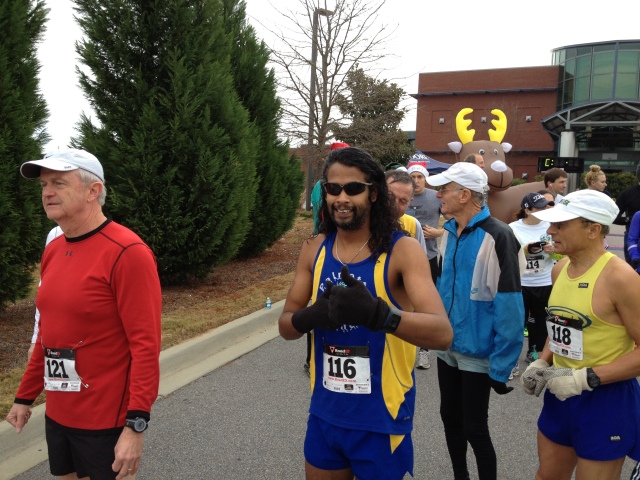 The Jingle Bell Run 5k  is a brand new race held in Lexington to benefit the Arthritis Foundation. I think this one of a series of races across the country  as a fundraiser for the foundation.

What drew me to this race was a) a little bit of trophy hunting and b) a totally new race and certified course. I had originally wanted to make this a crazy double dip, by doing this race at 9 am and the Rudolph’s Rampage 10k or half in Harbison at 10 am. Between Rudolph’s jacking up the late fee 10 bucks and perhaps a small bit of rational, non-obsessional thought, I decided the night before just to do this one.

Angel and I carpooled to the race and got there an hour early. The race director said they had over a 100 signed up, so some part of me was glad there would be a decent crowd.  Sometimes my dual role as president of the Columbia Running Club and insatiable trophy hunter creates a conflict of interest. Still I’m not going to promote a race for weeks and hope for it to fail just to possibly win a shiny golden running man.  Plus, I was transporting a faster age grouper to the race, so definitely not the best trophy hunt move there either.

As a warm up Angel and I decided to run the out and back part of the course. From the map it was basically just a run out of the Moore Orthopedic parking lot, straight on Ginny Lane, a brief loop to the right, back on Ginny Lane, turn around at a cone and head straight back. Lexington is definitely known for its hills (see the Lexington Race Against Hunger in February) but the area around Moore Ortho seemed pretty flat. Or so it seemed…

One turn onto Ginny Lane and it turns out Ginny is an evil, vindictive woman.  The first half mile is plunging down a cliff before the right hand turn at the bottom. Once you do the loop (which we didnt do on the warmup) , its mountain climbing time. Soul crushing hill. Then another just when you get your wind back. They put the turnaround just over the crest of the second hill, bringing you to a stop and making you try to regain momentum on an incline back.  Then do those 2 hills again in reverse and climb back up the cliff to the finish. Good times. At the end of the warmup, I wasnt sure if it was good to know what I was facing or bad knowing what misery awaits. I figured this course might be a full minute slower than my usual times.

By race time, there was a small crowd of mostly unfamiliar faces. The Columbia Running Club people were mostly the diehard 20+ races a year types: Gasque, Henry, Pete Poore, Rocky, Ponamarev.  I didn’t recognize any of the women. There were a fair amount of teens and a few in-shape looking younger guys. No clear elites and I figured Angel would probably win this thing unless one of the high schoolers was some cross country stud. I liked my chances to get in the top 10 and score some open points.

With the start I charged out hard and led the race for 20 feet or so before Angel , a teenager and 4 twenty somethings blew past me. We quickly separated out and Angel and the kid were the lead duo. We all went flying down the hill, which is strangely one of my weaknesses.  Guiding 190 pounds down a cliff is like controlling the freefall of a boulder.  As I’m blasting down the cliff I’m already dreading a) the mountain right ahead and b) how unbelievably bad this thing is going to suck going back up at the end. But at least we get a little respite with this unknown loop in the valley, right? Um, not so much. Turning right, we descend a little further until we basically march right back up a hill that parallels the cliff. Lungs and legs are protesting the abuse already. The hill does take out one of the dudes ahead of me and I power past him. One of the benefits of being obese by distance running standards is developing superhuman quads to carry all this weight around, which comes in handy on hills.

Angel and the kid are still running in tandem, and I wonder if the teenager is just biding his time before he takes the win. He’s basically drafting off him. The other 2 guys are spacing out but they’re both pretty far ahead.  There’s a cone turnaround at the top of this miserable hill, signifying the end of this side loop from hell. Plunge back down. I catch an evil glare from the guy I passed on the hill. Being passed by an albino sasquatch must be pretty shameful. Mile one 6:07

Turn back on to Ginny lane and we finally face the mountain we saw from the start. Soul crushing, but apparently its really kicking the ass of blue shirt guy ahead of me. I draw closer on the mountain. Mile 2 in 6:30ish thanks to the three hills. The turnaround is miserable since you have to put on the brakes from the start of a downhill and then get going again on an incline. I’m pretty beat but I finally catch up and pass blue shirt guy to take over fourth place. Angel is up ahead doing a good job holding off the kid.

We then have a long downhill before climbing the cliff back to the start/finish area. #3 guy is way ahead, so I figure no shot at catching him. I start figuring age group and open points at this point as I start slogging up the cliff…until..hold the phone,  I’m starting to make some headway into the giant gap between me and 3. Still, doesnt seem likely I’m going to catch him, he looks too young to be in my age group, and it would only be one point in the open division. Then he looks back… blood in the water. Its a quarter mile to the finish, and he’s at least 20 meters ahead, but F it..I’m going for it. I start throwing down as hard as I can. If thre’s anything I’m good at its the willingness to endure a great deal of pain for ridiculously small rewards.  #3  looks back again and sees what must be a scary sight..some frenzied pasty clydesdale bearing down on him like a runaway freight train. He’s still ten feet ahead as we make the last turn into the parking lot, and I’m at an absolute sprint.  Its going to be close ..real close. Then suddenly ..he coughs, and then pukes as I blast by just past the 3 mile mark. EPIC BLUE SHOE!  I assume normal people might feel bad for the guy, but normalcy is not my strong point. I’d be lying to say I didnt love it. I round the corner in the parking lot, see the clock,  and push it just hard enough to also score a sub 20.  19:57 officially, 3rd overall. 3.16 miles by Garmin.

I’m very happy with the result despite the slow time. I figure this course will take away at least 45 seconds to a minute off your usual road times. And of course there’s nothing I like better than a good blue shoe. This one has to be in the top 5, though I’ll take the Tigs takedown at the Turkey Trot or the 2010 Race to Read win over Greg as my favorites. The two guys I passed were very nice and thanked me for a good race, which was cool. Angel was awesome in blasting down the home stretch and holding off the kid for the win.  John Gasque won his age group then had to run to his car to pull off the double dip I decided against – he actually wore two shirts with the next race bib pinned to the shirt underneath.  He then finished a brutal 10k in Harbison. Awesome! Pete Poore, Rocky, Henry and Ponamarev all placed in their age group. The 70+ category had a real beast, David Jeffrey,  who ran just over 22 minutes at 70 years old. Impressive.