Ah, Cold Winter’s Day. The end- of- the -year,  all-the-big-dawgs-show-up blowout to decide who’s the best 5ker in SC.  It’s a special race for me, since it was my first in Columbia. I came to this race in 2008 not knowing a soul and having no clue what the course was like. I wanted to break 23 minutes, but ended up sprinting to what I thought was the finish only to find out I had another half mile to go.  That last half mile about killed me, and I look as bad as I felt: 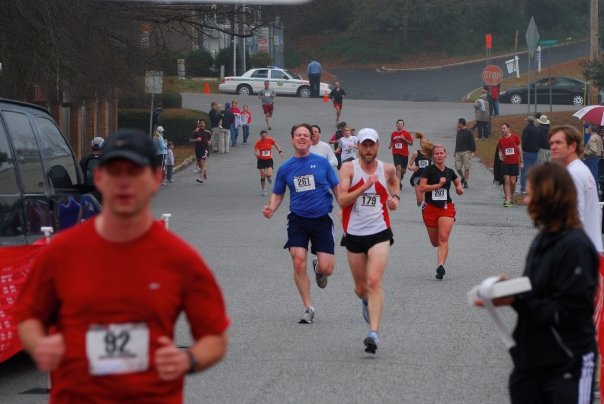 I failed miserably at the sub 23, sprinting with everything I could to get a 23:59. It was still a PR at the time though, after a year of being unable to run consistently with bad shin splints. In 2009, I was jacked up to redeem myself and to make a try at my first sub 20. Instead I got one of my most awesomely hideous finish pics: 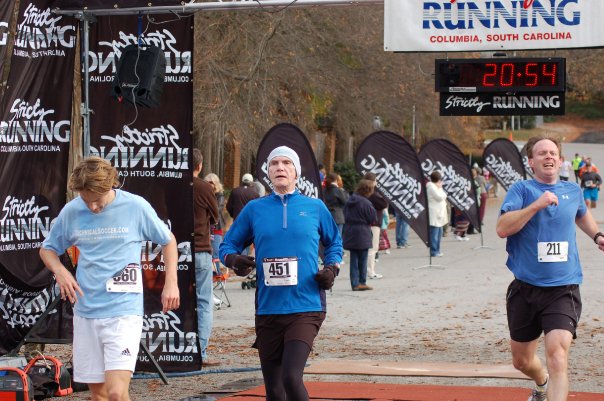 Wait, did you catch that? Let’s take a closer look.

Wait ladies, dont get too excited. Soooo much of the sexy right there.  In 2010 I did finally break 20, though it was a brutal race with wind and snow/sleet. Got a 19:47 , though not one of my better efforts of the year.  Me and Brumbach look like a couple of street thugs in this pic, and Drew like a total maniac. 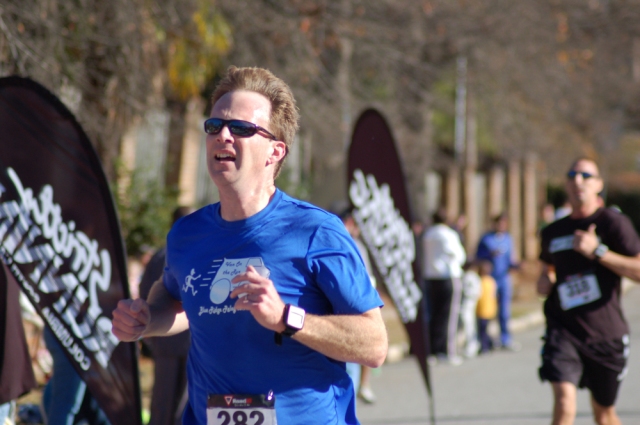 So despite getting progressively faster in this race,  its not exactly been glorious. I’ve never even come close to age group placing.

I really didnt think I had much chance of getting AG glory this year either. Jordan Lybrand had told me Strictly had invited some elites, as if it wasn’t tough enough already. I figured that even if I had a crazy performance like my first sub 19 last week, I had only an outside chance of getting 3rd.

I showed up my customary hour early, though the 10 am start is nice to get some extra sleep. Did a warmup with the Code, Trophy and Billy.  I could attempt to name the familiar faces at this race, but really just about everyone in the Columbia running community comes out for this one. The only thing that made me remotely hopeful of age grouping is that Angel was hurt, and Yerger , Drew Williams, Stephen Johnson and Gomez were all MIA. A strange 35-39 year old hole in the competition. Of course, as I’ve mentioned before, there are plenty of stealth age groupers out there that never race except to dash my trophy hopes at the worst times. Damn you surprisingly fit suburban dads.

Selwyn bills this course as “flat and fast”.  As a psychiatrist, I can assure you this man is delusional. I think you’d have a hard time finding any flat surfaces on this course, save for the bridges.  Basically a loop course that almost constantly rolls. There are definitely some extended downhills though that seems to produce some decent times, and the finish is like a roller coaster drop.  So I’ll give you fast, Selwyn.

Big crowd for this race, though the top end seems a little thin this year. The winner of the Jailbreak 5k, Scott Wietecha, is there, undoubtedly out for the prize money and the sub 15 minute bonuses. No Ashtons , A-Standard or Plexico.  The start sucks.  A quarter mile of pure, definitely not flat, hill.  Like a punch in the stomach right off the bat. I power up the thing but damned if Billy is already trying to psych me out, surging right past me. I catch up to him at the top, and then pass him on the way down a half mile of downhill. I hear someone deliberately stomping their feet right behind me, so I give that someone, who I thought is surely the Code,  the one finger salute. Turns out its actually Billy again, who keeps surging every time I pass him. I have no idea where the Code is, but figure he must be near. Up another non-flat hill to the first mile marker. I’m disappointed to see 6:12 on the clock, because I am already sucking some wind.  A long not-flat downhill  after the mile mark and Billy is all up in my s$%t again, passing me on both sides, cutting in front. Some serious psychological warfare here.  I concentrate on keeping the pace strong. Up ahead is Amy, being guided by Drew Soltau. I use them as a pacer, trying to keep them within 20 meters or so.  Then comes the beast, a decidedly not level , nearly half mile of incline. I’ve had enough of Billy’s Guantanamo Bay tactics at this point and set the freak quads into action. In powering up the mountain,  I start nearing Amy and Drew, and finally pass them just after the ensuing not-flat downhill. I give them the thumbs up but I’m breathing like I’m on crack, so I don’t know if I actually verbalized anything. Mile 2 clock says 12:15 or so, so I know I’ve picked up the pace some. When I pass mile 2 I just go to some very dark place and dig deep. Time to throw down whatever I’ve got.  I’m so zoned out that apparently I completely missed a big single car accident scene on the side of the road. Everybody was talking about it later, put apparently I was just listening to that maniacally competitive dark passenger in my head.

I hit the faux finish from 2008 and ramp it up another notch. More rolling non-level terrain. I have no idea what my pace is, but suddenly I realize I’m passing Claudia, who has consistently kicked my ass for most of the past 2 years. See below:

I’m in a world of pain by this point but I see Kenzie just up ahead, so I work on trying to catch her. I’m slowly drawing near but then we hit the last stretch, a freefall to the finish. I’m so tired I now I’m just flopping around, form going all to hell. I catch sight of the clock and I’m astounded its at like 18:30ish. One more notch of torture and I’m now pulling sub 5 pace to the finish, crossing the line a half step behind Kenzie, 18:52.  Strictly didn’t have an official finish photo for me, wisely cropping out the sasquatch to get the first overall female, but I do have Angel’s pic, which I like to call “Beauty and the Beast”:

15th overall…and shockingly..1st in age group. Another sub 19! I got my precious trophy. And all was good. Even cooler was getting to witness Tigs finally get back to sub 20 land, which I know has been a monkey on her back for a long time. This pic Angel took , with Eric cheering her finish, was awesome:

Also won her overall female masters.  Scott Wietecha won the race with a 14:57. Nuts. Kenzie and Claudia went 1-2 in the female overall, despite interference from the albino sasquatch. Paul Reardon took male masters with an 18:37, and Guantanamo Billy did take grandmasters. Lynn Grimes went sub 25 en route to female grandmasters, while ageless Nonie Hudnall and Albert Anderson won senior masters.  Age groupers include all 4 Golbus kids winning trophies, and Kenneth Vowles running a strong sub 20 to win 1st in his AG. Shannon Zeiders took 3rd in the 20-24, while racing machine Jennifer Lybrand won 2nd in the 25-29. Jason Dimery outkicked an out-of-towner by 4 seconds to take the 30-34, while Kristin Schmitz won the same group in the female division. Will Brumbach placed 3rd in the 35-39, while Amy cruised to 1st in her age group, with Marian Nanney taking 3rd. Eric Allers just outkicked Jason Gibson to go 1-2 in the 40-44 men, with Shannon Iriel taking 1st among the women over Shanequa Coles. Greg Howell continues to throw down good times despite recent injury and took 1st in the 45-49. Sharon COle took 2nd in the same division.  Thomas Tapp and Drew Walker both managed AG places with Tawanna Dennis taking 3rd in the 50-54. Geary, Pete O’Boyle and Carol Wallace won in the 55-59, while Patti Lowden and Alex Ponamarev won in the 60-64. Power couples John and Nancee Sneed and Henry and Margaret Holt dominated the 65-69 and 70+, with Jesse Smarr taking 3rd.