The Make my Day 12k is now in its 4th year, put on by Half Moon Outfitters and going to benefit Friends of Harbison State Forest.  The race has grown a lot by word of mouth because of the cool shirts, socks and other swag you get with registration. Plus, its still just 25 bucks. Its competed with other races before, so somehow I never made it out to the MMD previously.

I should preface this race with the fact that I exceedingly suck at trail races. They favor the small and the agile, and I am decidedly neither. You get nearly 200 pounds of albino sasquatch moving and it tends to keep moving, so all the stops, starts and dodging on trails is a hell a lot of extra work. And then there’s Harbison State Forest. She and I have all the close, loving relationship of a vindictivel ex-girlfriend. Read: not good.  My last tango with Ms. Harbison came last year in the Xterra half marathon, which was as much fun as a waterboarding session. Somewhere there are some ungodly awful finish pics of me –  pale, shirtless and delirious – crossing the line at 2:15 plus.  Lots of walksies and dehydration going on.

One of the most difficult aspects of trail running for me is wondering where the hell I am. I have no sense of direction, which generally isn’t aided by staring at the ground at high speed desperately trying not to fall.  So I will get lost if the trail isnt well marked, but just as important is not knowing how far it is to the finish. I can gauge my pace down to within 10 seconds on the roads, but I’m completely useless on the trails. Plus, even knowing how much distance is left doesnt tell you if its a soft straight downhill to the finish or some arduous nightmare of switchbacks and mountain climbing.

OK, enough bitching and moaning.. Oh wait, did I mention it was in the mid 30’s and raining at race time?  I’d like to voice a complaint about that. OK, done.

I got to the race 45 minutes early and there was already a big crowd. This race has continued to grow. Sure enough the shirts and socks were really nice. No Clint Eastwood this year, but  a high quality tech shirt just the same. Did I mention it was blue? Awesome.  They kept up the best AG awards ever – plastic guns you can wear as a medal. Not that I had any chance at getting one.  They have had 10 year age groups, and I knew Drew Soltau, Drew Williams, Rob Yerger and Ken Cobb were already signed up in the 30-39. Trophy and Charley from our sunday long run group were also there to represent in the thirties.  If that wasn’t competitive enough, a few bearded , scrawny, Anton Krupicka types were roaming around and looking pretty thirtiesh too.

With the start, Drew Soltau takes off like a maniac, though the rest of us maintained a more leisurely pace. I had major PTSD from Xterra, so I made sure I was going plenty slow in the beginning. I planned on using Geary as a pacer, since he’s a good trail runner and knew the course. My Garmin apparently never got started so I was flying completely blind. I ran with a pack that included Geary, Rob Yerger and Bri Hartley for the first few miles. Greg Howell and Dean took off from the front, but I figured I might be able to catch them later. I’ll save you the suspense: NOPE.  Speaking of going out fast, Charley and his dog Winston were already way ahead just a mile or so in. Charley took a brutal fall but popped right up seemingly not losing a step. I didn’t see him for a long time. A few miles in and the pack has thinned some. I passed Bri and was praying that I wouldn’t get chicked by an 11 year old girl. An incredibly talented 11 year old girl, but you don’t want to get beat by someone born in the 2000’s.  And, I knew Trophy had to be back there somewhere. That would be an even worse shame. I focused on keeping Geary and the Yerg in sight. We went on for what seemed like forever in this formation.

Did I mention it was cold? It was. VERY.  I was actually wearing my old school CRC jacket and it was soaked through.  There were bits of sleet and an occasional wet snowflake or two falling, but mostly just soaking, bone-chilling rain. Several areas on the trail were just complete mud pits. I was trying my best to avoid the worst, slowing to basically a walk at times, but I think I was witnessing the death of my latest blue racing flats. Why I couldn’t just break down and wear my heavier trail shoes is beyond me.  Oh wait – overwhelming maniacal competitiveness… that’s it. Some nasty hills in the middle.  The Midlands Mountain trail is no joke. I was exceedingly thankful we turned away from the Spider Woman trail – many horrible memories from Xterra lie there.

Luckily the trail was marked very well, because I had no clue where I was, or how far I had to go. At some point there was actually a five on the trail, so I assumed this to be 5 miles. Of course, trail courses are anything but accurate in distance. I had heard the 12k (7.4 miles) was more like eight.  At some point I passed Geary on one of the hills, though I know he was close behind with his industrial machine breathing.  Then I saw Charley and Winston up ahead.  I was thinking total roadkill, but I’ll be damned if Winston isnt dragging Charley up these hills. Every time I got close on the inclines they would pull away a little on the downslopes. I started ratcheting up the pace a bit so I would be sure to catch them by the finish. But apparently Charley was doing the same thing.  I got real close on a particularly steep hill, but he pulled away again on the straightaway. At the top of the hill we passed a field that I recognized and I started to realize we were getting close. I ramped up the pace a little harder but wasnt making much headway on the Charley gap. And then suddenly, there’s the finish. I crossed in 59:20 something, 20th place.  As mentioned , my Garmin was never started, but informal survey of others had the course around 7.8 to 7.9 miles.  I wasnt thrilled with the result, but not too bad considering the trail and conditions.  And at least I didnt get Trophied. Charley, Clyburn , Rob and Greg all kicked my butt though.

Drew Soltau ended up in 3rd behind two guys from the upstate. Bri won overall female in a close battle with Birgit. I dont know all the age groupers since I missed a little of the award ceremony desperately trying to stay warm in my car. Dean, Brady Ward, Sarah Blackwell, Henry Holt, Arnold Floyd, and Winston Holliday all took home some glory. I’ll have to check for the complete results when they get posted. 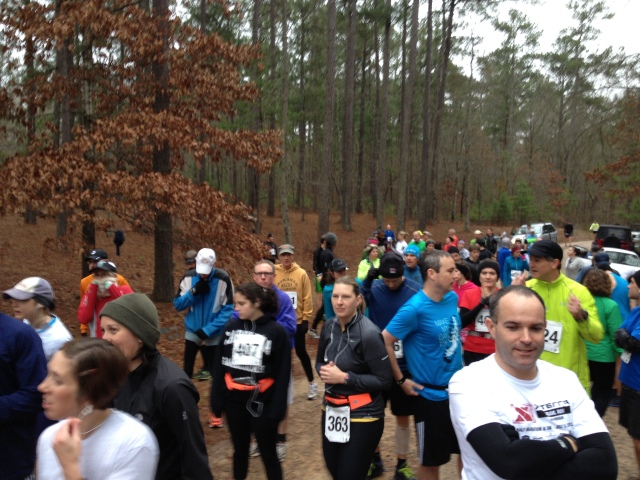 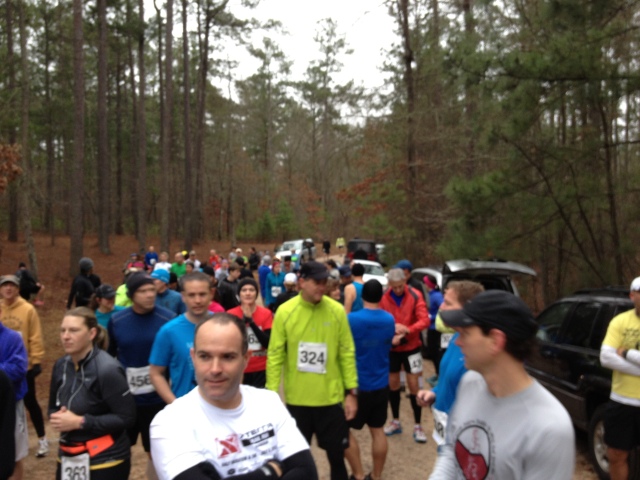 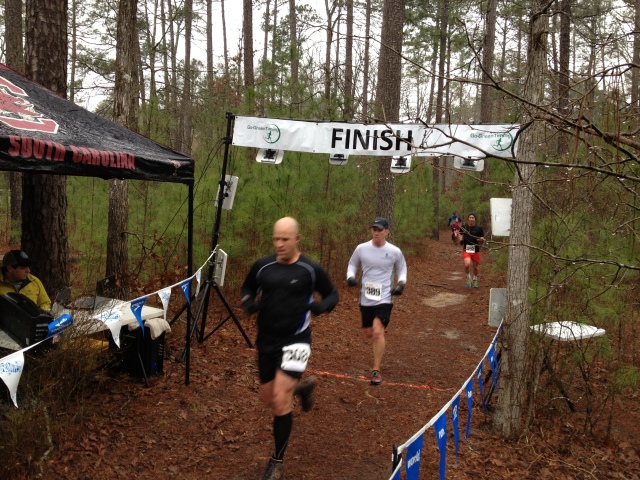 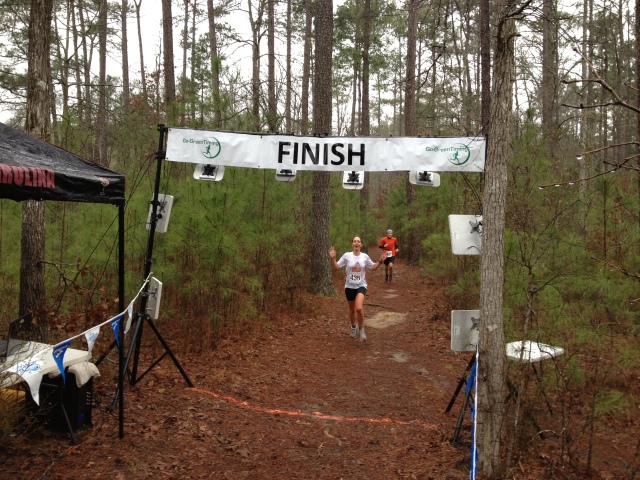 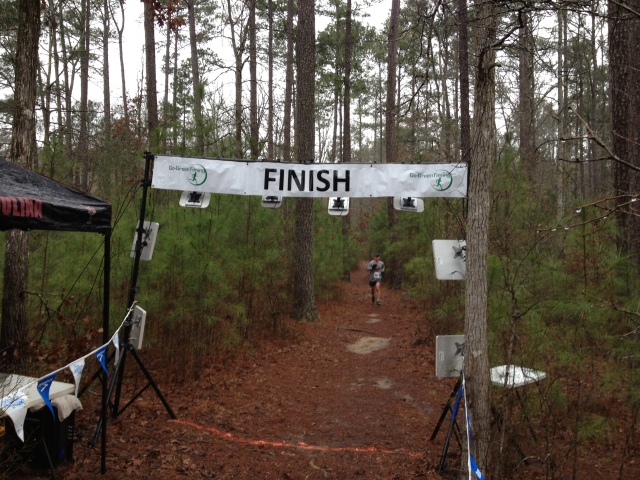 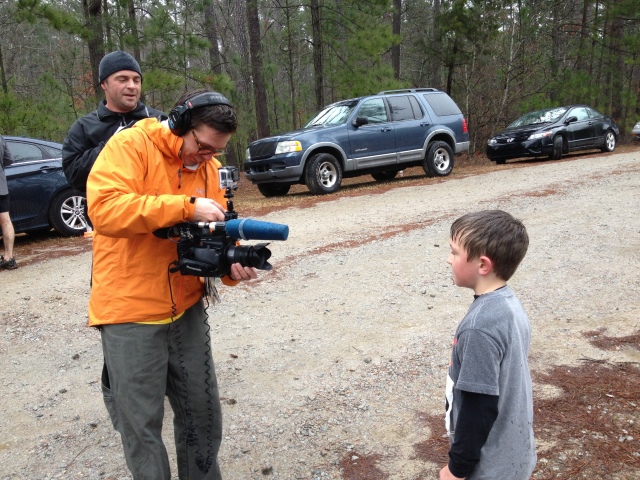 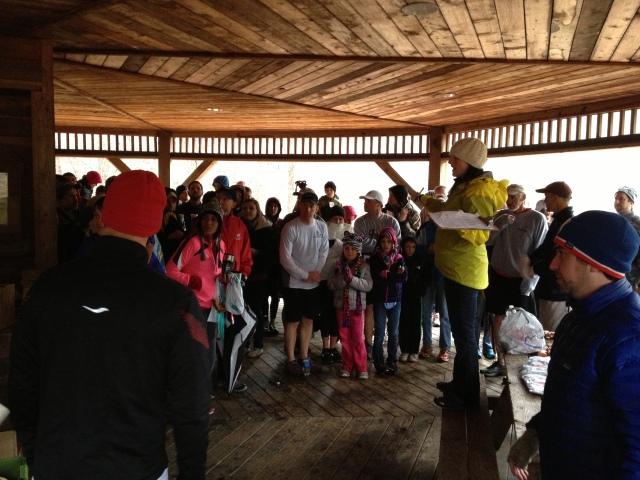 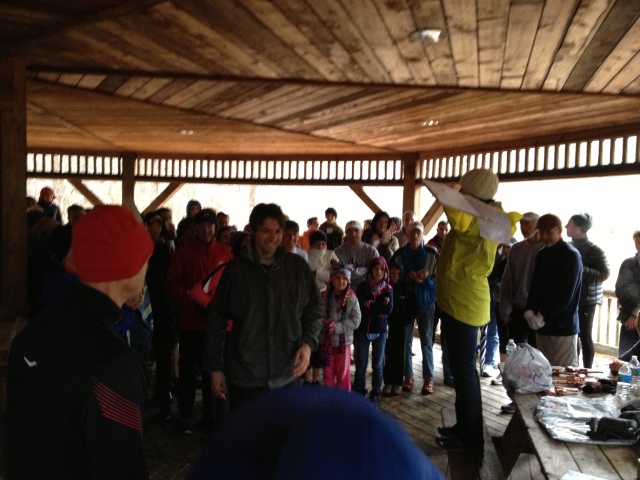 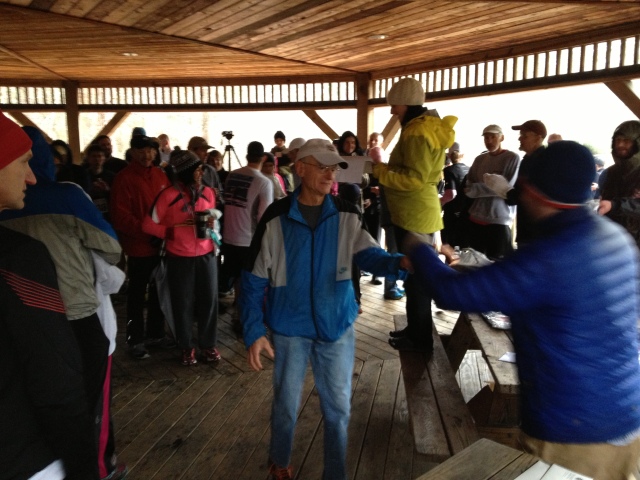 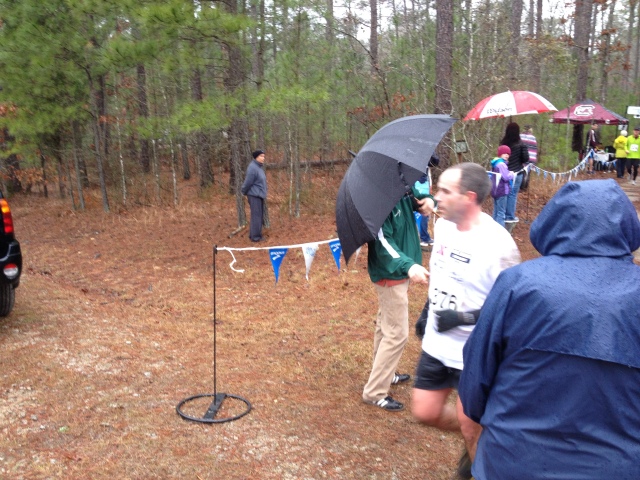 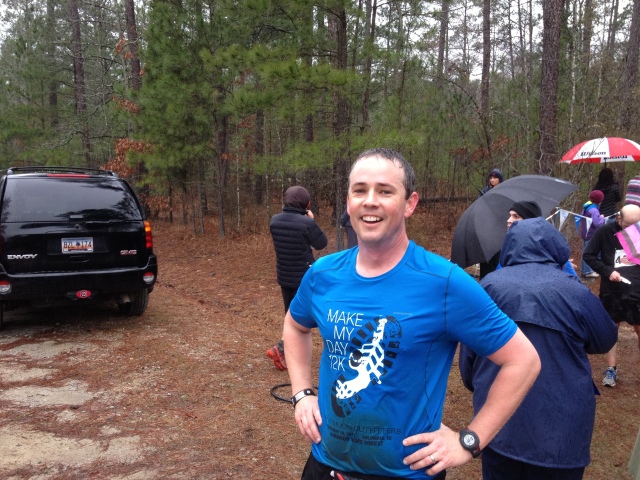 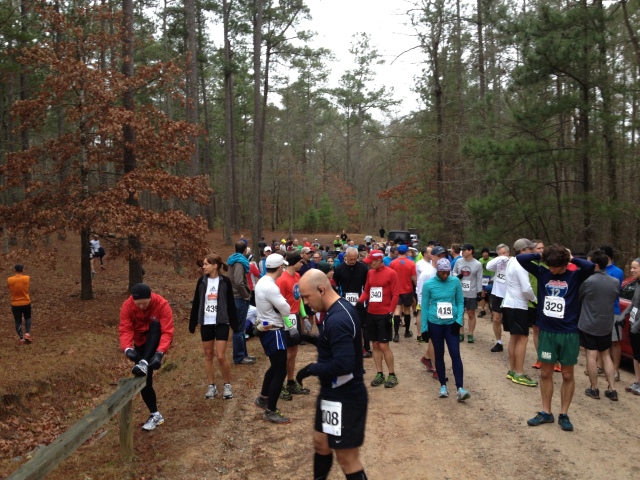