Once again the Palmetto 200 and the Palmetto Half were on the same day, so I had to skip my “home field” race. Trophy agreed to submit his report on this race, which is held on the hallowed Blue Shoes training grounds and directed by our fearless marathon training leader, Ken “Captain Marathon” Calcutt.

This is the 4th year of the Palmetto Half Marathon.  Race starts and finishes in Sandhills. This race is one I definitely look forward to.  The race director Ken Calcutt is a good friend and running companion and it’s also a course that we train on quite a bit, so I know it well.  This race usually brings out a lot of familiar faces and fast runners.  This year’s field was missing some notable faces due to the Boston Marathon and the Palmetto 200.  Most notably…the Blue Shoes.

Trophy appears to have a chip on his shoulder…a 6’3″ 195 pound pale white chip.

The weather for this race was perfect. Temps were probably high 40’s when I got there and low 50’s for most of the race.  I arrived early to beat the massive crowd and do some expected socializing.  With the Blue Shoes absent I feel it is my job as his sidekick to mingle as much as possible.  A job I take very seriously. I decided to camp out in front of Academy and survey the talent while talking to fellow running group member Nathan.  After a little while of this we join Larry, Matthew, and Tommy for a quick warm up.  We get back in time and I make my way through the crowd to near the front.  I see Plexico is here and figure he is favorite to win.  Not too many fast faces that I see.  But you never know where they will come from.

Trophy was probably warming up to make absolutely sure he had his 1:34 half pace down.

My goal for this race was to break my 1:34 curse. Up to this point I have run 4 half marathons in 1:34….all of which were within 11 seconds of each other and two were exactly the same time down to the second. Apparently I am extremely consistent in half marathons…even though I have zero consistency in a 5K. Go figure. My training had been pretty decent coming off the Columbia Full. I figured it was about 50/50 that I could break the curse and go sub 1:34.  Unfortunately I didn’t see any good pacers to start off. Where is Burgess when you need him!??!?  (Last year he was kind enough to pace me and do play by play)

Burgess likes to jibber jab during the race and then drops Trophy like a bad habit. Its all those Dr Pain /miles of smiles intervals from last year. My Burgess Project continues to do well. Bwa ha ha ha. My hopes were high for the Trophy at this one. I figured he had a 1:32 easy, maybe 1:31.

We take off and the pace is pretty fast to begin with.  I hit the first mile in sub 7 and know this might not be good. We reach the overpass and I see Plex already turning on to Two Notch and already opening up a good size lead. Shocker.  I’m feeling pretty good at this point and am just keeping steady with around a 7 pace.  The last few miles coming back down Valhalla is rough so I need to get some cushioning. I’m about 3 miles in when I realize….there is no female in front of me?!!?  Odd. Normally some fast ones will show up and whip up on me.  Hold that thought. I look to my right and here she comes. So much for that. Not only does one pass me….but 3.  They were running in a pack of sorts….each separated by about 5 feet. I had a plan to stick with them for as long as I could. Good in theory…bad execution. They dropped me quickly.

What’s worse than getting chicked? Triple chicked by three girls he doesnt even know.

Everything went pretty smoothly until the hills in Wildewood.  They sure can suck the life out of you. I got back onto Mallet hill and headed home and tried to regain my speed I had lost on the hills.  I passed a couple of guys and was feeling decent. After a little ways down Mallet Hill you get to start running against the back of the pack.  I find it actually works well and most of them are quite nice and try to motivate you.  At this point in time the sun is coming up and I’m starting to feel it…so it was definitely needed.  The run down Mallet allows you to get some momentum back…and the few streets before Valhalla aren’t bad either.  But then you get back on Valhalla and the fun begins. The first part is downhill and nice.  But then you get a few rolling hills and this can make or break you.  It’s at a point in the race when you start to wear down.  For me…it seems to be break time. I am struggling to maintain pace as I go through the hills. I’ve run them many times so I know exactly what to expect. The only good thing was that no one was passing me.

Interestingly, Trophy leaves out the nasty quarter mile mountain on Valhalla. I run it a couple times a week. Its a beast and will break you just after mile 10.

After a nice little climb we finally reach Two Notch and turn for home. After a slight rise…you get a little bit of a downhill stretch back to the overpass at Clemson. I ramp up the pace a little bit, but feel at this point it’s pointless. The ever present calculator in my head is telling me that my goal of a sub 1:34 is pretty much unattainable without running a sub 6 final two miles. But…I drudge on.  Hit the overpass and it’s as fun as always.  The finish at this race is awesome though (once you get up the overpass).   I start the descent to Sandhills and try to pick up the pace.  I was passed by a fellow who looked suspiciously like a possible age grouper a little ways back. Must track him down.  I hit the turn into Sandhills and see he is slowing.  Time to unleash the Blue Shoes (metaphorically speaking since I just bought a pair of garnet and black shoes and this was my first race in them). I do not possess many things in life…but a kick I do have. I floored it and gave it everything I had.  Apparently dude has no kick cause it wasn’t close. But fun nonetheless. If you don’t feel like you are going to die when you finish…what fun is that?!!!?  I felt like death.

A finish to make me proud. Nice job Trophy.

I wasn’t sure of my exact time. My watch had delayed a little bit at the start and I didn’t catch the time on the clock as I was racing through.  I knew it was 1:34 something…so I wasn’t too concerned. It wasn’t until I got home and checked the results that I saw it. 1:34:22.  Why is this significant?  First off….1:34.  As Alex might say…son of a bitch. Second…it is the exact same time down to the second as my 2012 Palmetto Half time and 2011 Gov Cup time.  Wow. Is this even possible?!!?  I’m starting my own business….pacing people to 1:34 half marathons!  Email me for details. 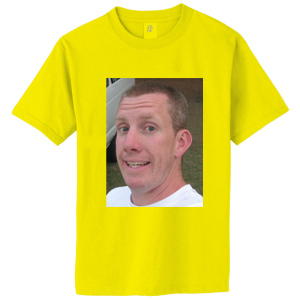 As expected Plexico won by a couple minutes. 2nd going to James Jackson of Aiken and 3rd to Jonathon Ross of Atlanta. The female winner was indeed the woman who was in the lead when they passed me.  Heather Costello of Lugoff. 2nd going to Emily Schneider and 3rd to Ashlee Sears.  Winning time for Heather was 1:28.  Apparently they decided to pick up the pace a little once they passed me.  First place for male masters went to the leader of the A training group Larry Jourdain with second going to John Bradley.  First female masters was Sharon Cole.   I didn’t talk to everyone after so not sure of PR’s and all times. The Ward family did well.  PR’s by both Heath and Jen in the half and Brady and Brooke in the 5K.  I’ll let Alex hit any other CRC members who may have placed.  I, by the way, finished 4th in age group.  So close. And the guy I passed….indeed in my age group. Good call.

There was also a 5k going on while we suffered through the half. Mike Hedgecock squeaked out a victory over Renato Cortez, Jr.  On the female side Nicole Berzins earned the victory.

Trophy signing off.  (Until I run another race Alex doesn’t or I beat him)

Good luck with that. Thanks, Trophy!