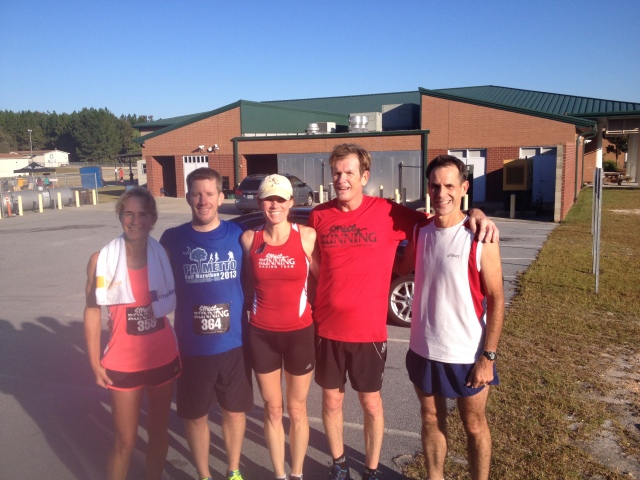 Stop number 2 on the comeback tour is the Race to Read 5 miler in Lugoff.  I decided I would actually sign up for this race in advance because there was no way I missing this one. Race to Read was my masters thesis in the study of trophy hunting, beautifully executed in 2010 to bring me my first holy grail: the overall win. The race turned into a brutal battle between myself and Greg Howell, two age groupers dead set on claiming the ultimate glory. I passed Greg with a quarter mile to go and kicked so hard I almost donated some Honey Bunches of Oats at the finish line. But it was sooo worth it.

My luck has been decidedly different over the past 2 years, with the Race to Read getting on the Palmetto Grand Prix as well as our Tour de Columbia. Suddenly people who were actually fast started signing up. Damn them.

But they cant take away my moment of glory, so I always come back. This is actually an awesome race even without the trophy moment. Betsy Long, who is a runner herself, knows how to put on a good event. The course is a beautiful rural route through the rolling hills near Lugoff, with a start and finish at Doby’s Mill Elementary. The start features a short incline followed by a mile of paved flatness. Mile 2 is almost all on a gentle downhill gravel road. You then turn back on a paved road with a big climb. After the 5k point, theres a turn then long downhill to mile 4. The last mile has a killer hill at the beginning then a weird detour onto a curvy paved nature trail on the elementary school grounds with a finish near the start in the parking lot. Despite all the rolling hills, times have been pretty fast on this course.

I showed up about an hour early, not knowing if I could or should run the race. I still fight some stiffness in my left toe in the mornings, and the whole left leg is probably operating at 60 percent. I ran the dry run , 3 miles two days later and had an aborted try 2 days after that when I tried to run first thing in the morning and it just didnt feel right. Grand total of 10 miles since July 15.

I jogged a warmup with Billy and Trophy and after debating back and forth at least 10 times,I decided to go for it. This was scary, because there is no shortcut on this route other than skipping that nature trail at the end. Once you start, you either have to continue or head back the way you came. I kept having these horrible images of me limp walking half the race, with everybody passing me and finally the cop car flashing right behind me.

Yes, the Trophy was there.  With a perfectly good, free Gov Cup preview run the same morning, I can only surmise that the Trophy was out for Blue Shoe blood.  He can only ride out that 2010 Richmond marathon victory for so long. Early on, I was thinking Billy would win this thing, though power couple  Bedenbaugh and Shannon showed up a short time later to pretty much seal the overall trophies. Still, there were no other elites there. Sharon Cole has won this thing in the past I think, and she was back to defend her title.  Sure as the sun shines in the morning, Gasque, Henry Holt and Ponamarev were on board. Pete was surprisingly missing though. Birgit, Andy mikula, James Hicks and Valerie Selby were the rest of the CRC contingent. Mark Robertson and his two sons showed up, so figured they would be good to pace off.

With the start, the small field kept surprisingly together, as there were no Bishop/Plexico/Ashton types. A quarter mile in and I can see the mini pack of Shannon and Billy (with Bedenbaugh pacing) leading the race and its killing me. I’m always racing with those two when I’m at 100 percent. Oh well, I can’t be thinking of trophies with the gimp leg.  Speaking of the gimp leg, even when the toe loosens up it still feels different from the uninjured leg, so I really have to concentrate on the actual mechanics of putting one foot in front of the other. On the plus side, chugging along at 8 minute pace is not that bad cardio-wise despite the 2 month+ layoff. I keep up with the Robertsons for awhile then move up to Ponamarev pace, and pass mile 1 in like 8:05. This is blazing in comparison to my first race back with the 9:15 start. After the mile marker is another mile of all dirt road. The cushioned surface feels good and I speed up just a touch, passing a couple of people. Up ahead I can see two targets: Hicks and Ferlauto.  Just short of mile 2 we turn off the gravel road onto a paved one, and Hicks looks back. I try and wave a sign of support but maybe he took it as notice I was gunning for him. Maybe I was. With the toe actually working to push off I ramp up the pace and draw near James. We hit a long nasty hill before the mile 3 mark and I know I’ll catch him, because McGimpy toe loves uphills. I pass James about halfway up the hill and see my next two marks – a guy in a blue shirt (later identified as Garrick Douglas)  and the Ferlauts.  The hill has shrunk the once huge gap and I’m closing in just after mile 3. Unfortunately, the course then turns back towards home at this point and its downhill for a half mile. As much as Senor toe loves the uphill, he is not so fond of the downs. Garrick and Michael start to pull away again. Just after mile 4 is the worst hill on the course, the one I used to catch up with Greg in 2010 and capture my glory.  I try and really push it up the hill and this is the first time I’m really starting to suck wind. Pace has dropped into the low 7’s by time we crest the hill and start the nature trail. I’m really gassed from charging the hill but I catch up with Garrick, who resists and then finally relents to being blue shoed.  The nature trail veers out into the open and blows my cover on the stealth approach to Ferlauto.  Michael is looking like toast but the combined effect of the finish line nearing and the palpable shame of possibly being McGimped by one of his coworkers is enough to motivate him to kick it in.  He’s too far away once I get out of the trail, and my kick is probably 50 percent right now, so I have no chance. I still mount a little bit of headless chicken mode, just to make sure Garrick doesn’t decide to return the favor. I cross the line in 38: 50ish, 7:47 pace.

Pretty happy with the result – a big increase in pace from my first race back 2 weeks ago, and that was a 5k. Toe and knee felt OK afterward. Still far from 100 percent but heading in the right direction.

Bedenbaugh won the overall – he paced Shannon for 4 miles then decided to lay a beatdown on the rest of the field for the win. Billy actually wasn’t too far behind though for 2nd. Shannon easily took first female, though Birgit and Sharon Cole has strong times to place overall as well. Oh, and then there was Trophy. Trophy placed third male and claimed a rare head-to-head Blue Shoe triumph. Don’t worry Lady McGaha, I’ll be back.  They only did one deep in age groups, though the prizes were really cool – hand painted gourds by the Doby’s Mill kids.  Alex Robertson made his dad proud with a win in the 13-19, and Andy Mikula represented CRC well in the 25-29. Valerie Selby won the 55-59, while Alex Ponamarev took the 60-64 and Henry the 70+.