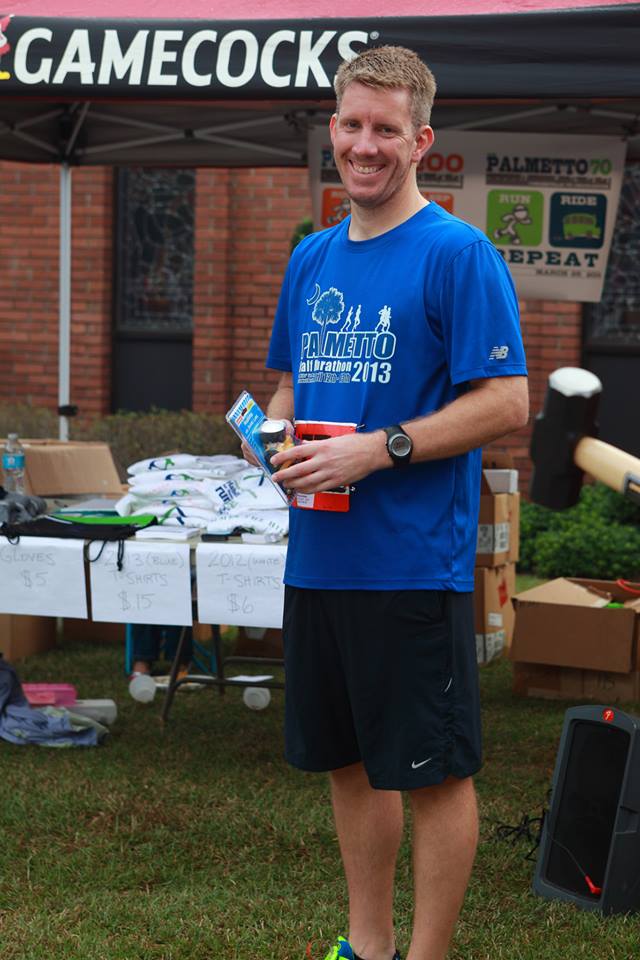 Trophy agreed to do a guest blog post this week, since I was up in the mountains with the family this past weekend. Hammer the Hills is an awesome race, so I was kind of bummed to miss it again this year. Then again, its probably best for the gimp to take some weeks off. You know…like normal people. Here is his report:

The 10th annual Habitat for Humanity Run/Walk was on Saturday. This race is also known as “Hammer the Hills”, for good reason. I had never run the race before, for mostly obvious reasons. It’s hilly and normally there is another race on this day that seems more appealing. This year, I decided to do it. It was a free race for us BlueCross runners, so that definitely played into my decision. Camden was featuring a very flat and fast course on Saturday as well, but I made a non Trophy like decision and took the hard free race. I know, shocker. I’ve been training pretty hard lately and actually thought that running a hilly course would be good for me. Not sure what came over me. I’m not going to lie, I looked at past results and knew there was a chance of me winning one of the races. Not a complete trophy hunt, but definitely factored in. They have a 5K, 10K and a 15K for those that want to run long on some hills.  9 miles on hills did not sound too enticing. Normally I would pick a 5K, but I’m trying to change my ways and embrace distance and hills, so I chose the 10K.

“Not a complete trophy hunt, but definitely factored in.” Whatever, dude. The Trophy took one look at Andy Mikula’s 44 minute winning 10k time from last year and went for it.

Our normal blogger and leader of all Columbia running apparently decided to go up to the mountains. Sounded like a nice idea, then I looked at some pictures of him on Facebook.  Apparently he decided to give up cliff diving for mountain diving! Yikes. I will admit I was a little nervous. Anyone else get nervous too???  Then I thought about what he must be going through, having seen my name ahead of his for the last two races. Has to be brutal on the psyche and maybe this is why he went to the mountains??? I’m not sure, but I do know that he made it back safe and sound. I’m happy about that since no one blogs like him.

This is him expressing faux concern and feeding into my ridiculous melon-headed ego in order to bring up the fact he has actually beaten me the last two races.

This race doesn’t draw a large crowd. If you put all three distances together it comes about to a normal size race. It’s well run and directed though. Jenn Covington is the race director and does a wonderful job. There are quite a few turns on the 10K route and all of them had people at them. Nothing like making a wrong turn and ending up lost or worse…a short course.

Course misdirections are my number one pet peeve. Jenn is a runner so she knows how to marshal a course correctly.

I got there early to pick up my bib and scout out the talent. At first it was mostly non racers. Randy Hrechko showed up, but luckily he was running the 15K. I see Geary show up, but he in 5k. What?!? But hey, I am happy. Not many women show up other than Ashley Horton. She is running the 10K as well. I see Howie, but he is in street clothes with a camera. Whew. He is coming off an awesome marathon. But wait…there is Angel. Oh lord. Fast and in my age group. Awesome. But of course he went for the 15K. So far looking good. I eventually see Sarah Blackwell, Alex’s running mate from Ray Tanner. She has come to run the 15K. The bibs have different colors so that helps with determination. Temps were ideal…low 60’s and 150% humidity. Just how I like it. Not. I do a warm up with Randy, Geary, and Ashley.

I told the Trophy the 10k was definitely the trophy hunt pick. The fast guys will pick the longest race and when forced to pick between undercards, always choose the middle distance. Surprised Geary chose the 10k, that is his specialty. Howie is also good at the 10k, but I guess 1 week removed from a 3:05 marathon at age 50, he deserved the rest.

We line up and the 15K and 10K are in front, 5K behind. I’ve got a couple 10K’ers on my radar. Figure I will know quickly what competition I will have. There is one guy with an UA shirt on that is sketchy and one guy who is shirtless who is looks like he could be fast. About all I see.

We start and it’s about what I expect. Angel and one of the sketchy guys are up front. Then there are two young kids running the 5K and then the shirtless guy and me, oh and Coolio. We make the turn and separate from the 5K and I’m in 5th by my calculations. My plan for this race was not to kill myself on the hills and then recover and speed up the last part after the hills. My plan. Rarely does my plan go how I want.

I like how anyone capable of beating him becomes “sketchy”.

After a couple miles I can still see Angel, Coolio, and shirtless guy. Angel is starting to break away. UA guy is nowhere in sight. I know he is running the 10K so I’m just hoping he dies near the end. I have Coolio, who I wasn’t sure what he was running, and shirtless guy in my sights. I run through the hills about 50-100 yards back of them. Somewhere in there Randy comes by me doing the 15K. He catches up to shirtless guy and Coolio and they run back in a pack for a while. I’m just biding my time keeping an eye on them.

We get past the hills and only have maybe a mile and a half left. I know there is a flat portion for a while so I try to speed it up. Looks like they might be fading a little so I’m ready to pounce. I pull from my inner Blue Shoe and make a plan to pass them.  All I live for is to make the Blue Shoes proud, which of course, was the color or my shoes that day. We are going down a road back to 378 and I’m gaining. With each little bit I gain, I get more confidence. We eventually turn down the Botanical Parkway and have to make a loop there. A little bit after we go in I see UA guy come by and know he has first place locked up. I’m still gaining on Coolio and shirtless guy and now I’m pumping even harder. By the turn around I am only 10 yards behind them. Quick look at Coolio….blue bib. 15K  Doesn’t matter, he is toast and I fly by him. Shirtless guy and Randy are running right in front of me as we head out for the last half a mile. Now I have some adrenaline and I’m kicking it. I catch shirtless guy and I’m not sure if he will try to race me or not. He glimpses over like he saw a ghost and I know…he is toast. (After the race he was like, where did you come from???) I keep moving and pass Randy before I hit 378 and the final .2 of the race. I hit the hill up 378 and I’m trucking. No way I am letting shirtless guy come back on me. I finish and turn around and he is not that close. Whew.

I have taught you well, grasshopper.

2nd place overall and shirtless guy ended up 19 seconds back at the finish. I’ll take it. First guy ended up almost 2 minutes ahead for the win. I rested a minute then started heading back down the course to see how Ashley was doing. I got to her and she is running not far behind another woman. I believe these are the first two, but I’m not sure. I pace her as best I can and we catch the other chick, but she is fully aware that we are there. She keeps us just behind her and holds off Ashley for a 3 second win. A second overall for Ashley.  She has since been enrolled in the “Blue Shoes I will cut your throat to beat you to the finish” school. We’ll see how that is working out next race. J  Very good run for her.

Pain is temporary , pride is forever! Gotta be willing to enter the pain cave, Ash.

Angel cruised to a win in the 15k and Randy got second. Sarah managed a second overall as well. Geary got beat out by two youngin’s in the 5K and managed a 3rd overall. It was a nice race and despite the hills and the humidity, I actually enjoyed it. I didn’t go up on the Blue Shoes anymore in the trophy area, but I’ll still take a 2nd on a hilly course. I heard there was a nice breakfast, but did not partake in it. Watching the figure.  I did get a cool new headlamp for my efforts! Can’t wait to try it out!  And by the way, top 3 males were all in my age group. Go figure. Apparently obsessive runners were all born around the same time. Go figure. Until next time….

Pre died in 1975 and passed on his spirit to all people born in that year apparently. Trophy will be first to point out that he has me beat in the overall win category 3-2, and left me in a crumpled heap in the 2010 Richmond marathon. I could mention a four year 5k win streak, though that is likely going down on Friday .

Thanks for the report Trophy!

Photos above and below are courtesy of Howie Phan