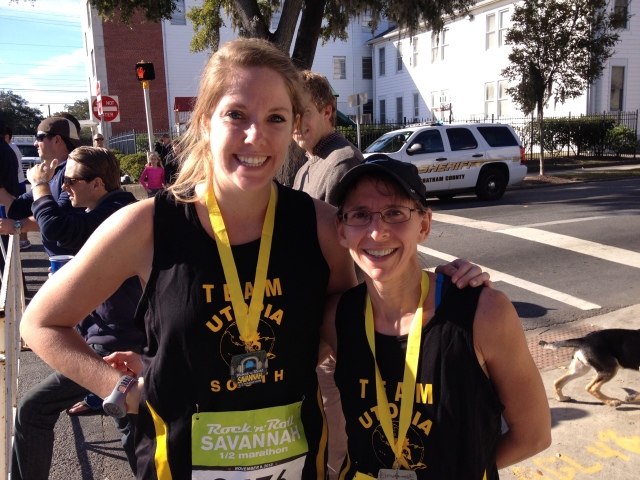 So this was supposed to be the one. My Boston qualifying attempt, the one that I signed up for in March and figured would give me a golden chance to get my 3:10 with all its glorious flatness.  I had already ramped up my mileage by July, I was in peak fitness,  and I was going to start rocking the 16 week training plan …right after my anniversary vacation in Kauai. Hmmm. Guess that didn’t quite work out to plan.

Sad to say,  I think the words “Savannah marathon” were on my mind very briefly after my fall, probably just after “alive” and “no devastating/life-altering injury”.   If all things happen for a reason, this was certainly one to adjust my priorities.

It became quite clear after several weeks on the couch that the marathon just wasnt going to happen. I was going to have to bag the whole trip, and eat all the cash I already paid into it (I prepaid to rent a condo).  Not only was I flushing months of the training I already did, but I was going to have to throw in 500 bucks too. Awesome.  But things changed when I finally, slowly, was able to get off my (now slightly larger) ass and go out for a few lumbering slogs around the neighborhood.  Nothing blue shoes worthy, but at least I was out there.  After doing a few 20-25 mile weeks by early October, I decided I would go and actually attempt the half marathon. Just to finish, no time to be a hero. How hard could it be? (Right, Tenacious J?)

Turns out pretty damn hard. My “long” runs leading up to this was the 7.4 mile Ray Tanner 12k and a possibly ill-advised 12 miler last Saturday.  That 12 miler on the Lake Murray Dam to Lexington and back felt like hell. I was probably doing 10+ minute pace on the last couple of miles, and Jeanna Moffett said she was thinking of asking me if I needed a ride back when she saw me from her car. I might have taken her up on the offer.

I went down to Savannah the Friday before with Spence and Trophy.  The condo I rented was a exquisitely decorated immaculate loft in the upscale section of Savannah’s historic district, called “Eco-chic”. It was owned by a professor at SCAD (Savannah College of Art and Design).  Three slightly less-than-chic dudes from SC were a little out of place, but the pad was surpisingly much cheaper than the insane 350/night hotel rooms in the same area. Professor Eli is my very fashion forward hero.

There was some disagreement about dinner, but we eventually ended up at Mellow Mushroom. Very adventurous of us to choose such a uniquely Savannah institution.  Since I was only doing the half, I figured I could eat whatever. Spence and Trophy were doing the full, but I guess we were all on the 3 beer, barbeque pizza pre-race plan.  Even I was afraid that might come back to bite me.

The next morning I felt OK though, despite the condo being located in the epicenter of party central, Savannah.  When your host gives you earplugs at check in, that should give you pause about the noise. I still slept like a rock. My duty was to pace Ashley Horton, one of my TUS teammates and fellow CRCer who was attempting her first half. She wanted to go sub 2 hours, which was about what I had planned anyway.

Pretty cold at the start but luckily not too uncomfortable. No real wind. My fairly new Garmin chose to die on the morning when I would probably most need it, since I was pacing.  Fantastic. I was alone in the middle of corral 5 for a long time until Ashley and Ilia (another TUSer doing her first full marathon) found me by the ecliptic shadow of my enormous head.  They like to live on the edge, because we started just minutes after that.

First few miles were a little rough. The toe decided to get unusually  nice and tight that morning, so it took a while to get going. Also, though I had triple knotted my shoe with my timing chip, I somehow failed to do the same with my other one. It came untied at a quarter mile, and I  ran the whole rest of the race with laces flapping. Early miles featured a most unwelcome overpass hill and a tour through Savannah’s most economically disadvantaged communities. Aka ghetto city.  After our slums 5k though, we turned into some very nice neighborhoods and then the historic section.  I felt pretty good 3-4 miles in with the toe behaving better. Ash was crushing it and we were able to leave the 4 hour marathon pace group in the dust. We lost Ilia around this time, though she had the whole 26.2 to worry about. We were doing pretty even splits – 8:50ish. I had my iphone map my run app going, but the distance was way off. This is probably because of all the Marcus Lattimore maneuvers I was pulling. I’m used to breaking free of a pack after the first mile or so, but I forgot everyone and their mom tries to break 2 hrs for the half and 4 hrs for the full. Consequently, we were running in the middle of a huge mob the whole time. Whenever we hit water stops I got caught in the logjam and then had to catch up, because I am considerably less agile than Ms. Horton. Could be my Sasquatch physique.

Mile 6 took us on a long out and back which gave us a long slight decline on the way back. Continued to do more 8:50’s. Ashley was looking strong. Mile 7-8 took us back very close to the finish before heading back out again. Although the cardio was fine, legs were starting to complain. May have been the complete and utter lack of half training coming into this race. Go figure. Around mile 10 I could sense Ashley was hurting a bit. I told her this was usually the toughest point, but at least we didnt have to climb Blossom St like the Gov Cup back home. I decided against telling her about my death march at my first half, where Trophy left me for dead at mile 10 and I hobbled down Devine St wanting to cry for my mommy. Probably not the best motivational story. I knew the half and full marathon course diverged at the 11.5 mile point, so I told her she was going to have to do a blue shoe kick from there. Unfortunately they had a chance to ring a bell at mile 11 and I couldnt pass up a chance to be ridiculous. After I rang the bell I lost Ash and thought she had decided to kick it in early. I sped up quite a bit and couldnt see her anywhere. Ramping up the pace on my cinder block legs was making me hate life quite a bit. I was trying to turn around to see if she was behind me, but my neck and upper body has the flexibility of an extra from the Walking Dead.  At mile 12 I pulled off to the side for a second then realized Ashley was only about 10 meters back. Whew. I was starting to fear she was in a med tent somewhere and I just left her. Pretty soon after I happened to see Drew Williams walking back up the course (he did like a 1:24) and he told me the finish was right around the corner. For future reference, “right around the corner” means “almost a mile” to Drew. I was trying to maintain a slightly faster pace than before and let my giant head be a beacon to the finish. Finally I turned the corner and could see the end. I resisted the urge to pull my usual headless chicken mode but I did ramp it up considerably. With about 20 meters to go I try and look back to see if I could maybe get a picture of Ashley’s finish when …BOOM she comes flying by at like mach 5 and viciously chicks me by two seconds. I’ve taught her well! She finished in 1:56:08 to my 1:56:10.

Pretty happy with the result – Ashley got her sub 2 hour PR by a long shot and I finished the half in one piece without walking.  After being a complete invalid 4 months ago, I will take it. I was pretty cashed though – no way I could handle a marathon at this point. I was brutally sore just from 13.1. We found Tigs and Eric shortly after and Tigs rocked a 1:32 and first in her age group. Eric did a 1:30 and was swearing never to do a half again. Dude does not like the long distance! LarryJpurdain finished just ahead of Drew in 1:24:22. Laurie , a fellow TUSer, did high 1:56 and didnt realize she was right behind us the whole time. Howie Phan blazed a 1:33.  Ken Vowles did 1:44 on his way back from injury. Pam Boggs and Beth McCorkle , also on TUS, ran 1:54 and 1:53 respectively. Tracy Tisdale had a 2:11, which she was less than thrilled about, but still not bad.

After running a gauntlet of chocolate milk, gatorade, water, beef jerky and pretzels (did they want us to immediately replace all those burned calories?) we headed back to the final right turn to wait for our marathoners. Rob was first in with a 3:13 , painfully close to a BQ but a nice time nonetheless. Spence blasted a 3:19 and was very happy to take down the Blue Shoes PR (3:20:44) My friend from high school, Cole Smith crushed a 3:22 in his first full. Looks like he had a rough time at the finish but that’s blazing. I’d better watch my back.  Brian Purvis was pleased with his 3:24 on less than optimal training. Jessica Workman crushed a 3:26 and will be headed to Boston. Winston Holliday was right behind her in 3:28:11 and also a BQ. Brad Marlow had a tough day but still managed a 3:30. Joyce Welch obliterated her old PR set at Lehigh in September (3:41) en route to a 3:35. Charley Clements also PR’d with a 3:36. Colleen Vowles was apparently less than thrilled with her 3:39 but still an easy BQ. Trophy and Ken Calcutt had brutal second halfs and both caught a bad case of the walksies. They crossed together in 3:44. Israel Bilbao followed them in 3:46. Ilia Owens finished her first marathon in 4:37.

Thoughts go out to the family and friends of Jake Zeman , a 35 year old runner from Columbia who tragically died near the finish at Savannah. He appeared to be a fit guy without any health problems by what I’ve heard.  I somehow didn’t know Jake, but his passing makes all of us realize how fragile life can be. Be careful out there.