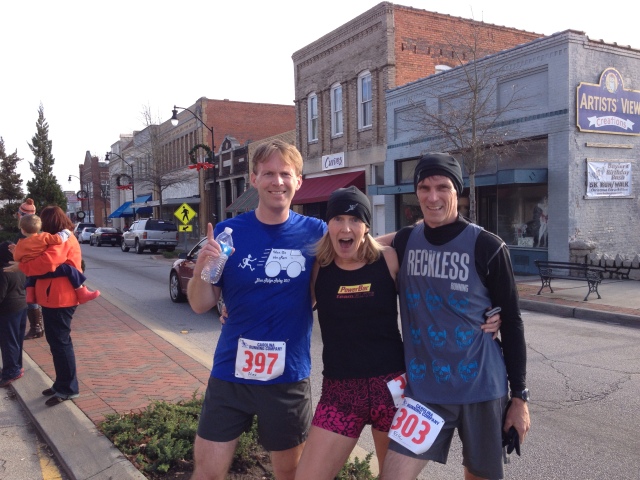 Bayler’s Bash is a 5k in Bishopville, run on Christmas Eve morning to celebrate the life of Bayler Teal – an 8 year old who lost his life to neuroblastoma in 2010, and who became a rallying point of the USC baseball team on their run to the College World Series title. Proceeds go to the Children’s cancer center at Palmetto Richland, so hard to find a better cause. I’ve run the race since its inception in 2010 and have come back every year since.

What else is there to like? Definitely the course. Its a total pancake. Probably the flattest I’ve come across in the midlands, with only the Camden colonial cup 5k coming close.  Bishopville is also a cool small town with a classic main street right out of the 1950’s.

Lots of personal triumph here for me as well – I got third overall at the ’10 race and won an awesome trophy. You know how I covet the fake golden plastic. That was also the same year Robbie “O.G” McClendon won and I got to see what a celebrity he is in Lee County. Dude is a legend! He missed this year, and I actually got asked by a random kid “Where’s Mr. Robbie?”. Sorry for the guilt trip, OG.

The 2012 race was also the pinnacle of the hundred-odd 5ks I’ve run in the last 5 years. A perfect storm of peaked fitness, ideal weather , the aforementioned pancake course and a touch of reckless abandon produced the 18:46 PR, even with a course that is slightly long (certified though).

This year would be decidedly different. The control-alt-delete (on running, and just about everything) that Kauai inflicted on July 15 has led to a long, difficult comeback that has been painful physically at times but perhaps more so on my inflated ego. But things have slowly come around. I had to start back at 26 minutes in September and gradually try to balance my training with needed rest and recovery for my toe and knee. I got epically chicked in my showdown with Syd at Safe in the City in October but my 20:38 at that race gave me some hope nonetheless. Most of the 5ks since have been high 20:xx since I’ve struggled with getting power off the gimp leg , in addition to my cardio going to the crapper. I haven’t sucked wind like this since I first started running.

My goal in this race – get back to the sub 20. The original sub 20 quest took me 2 years and happened with my first race on my first pair of blue racers. The rest is history. To get back there would be a huge symbolic part of my comeback and a good step towards getting back to my pre cliff form.

I somehow got Code to come to this race with me even though he wasn’t racing. Its always good to get a non-racer to help with picture duty. He was probably really regretting his decision when I pulled into Bishopville at 6:30. For one, I was thinking about the 55 minute Hartsville travel time when I left the house. When we got there it was a ghost town – hardly any sign there was a race aside from a few cones and a couple cars. After hanging out in the car for awhile, I checked the website and realized the race was at 9 instead of eight. Doh! I was all tight and kind of sleepy once I finally emerged from the car around 8. I did manage to christen the brand new porta potty. Fellow Bayler’s racers – for that I am truly sorry.

Nice crowd for this race. It’s steadily grown since its first year. We had a couple of CRC people make the trip (30 minutes, not 55) including Angel, the McGrievys, Rocky and Team Allers. Tigs was also in search of a 2013 sub 20 and was hoping to do it here. We agreed to help each other pace, which was nice. I think we both knew he gloves would be off in the final mile, though!  Paul Reardon, Lorand Batten and the whole Fitness World Run Club crew were on hand, led by Curtis Boyd. These guys really represent with their blue shirts. I’m used to them being mostly mid packers but they brought a few really fast dudes this time around.  Paul won 3rd in this race ahead of me last year, but he’s been injured for 8+ weeks, so this is his first race back. He planned to take it easy this time around.

After a prayer we were off. The start is always a little crazy at this race because of the narrow street and the very abrupt left turn about 20 meters from the line. Some joker parked right at the turn which made this bottleneck a little treacherous, so I tried to warn everyone on the front line to watch out. Also self-serving to protect my gimp toe. A quick completely flat loop to start, less than a half mile. The flatness was awesome but there was definitely a nasty little headwind as we turned back toward Main street. A half mile in and I’m surprised by how many people are out in front. I’m not used to there being more than a handful of sub 20 racers here. Tigs is firmly attached to my shoulder. I told her I would try and rein in her fast start, and hopefully she would light a fire to my slow starting self. We made the turn off Main and hit mile 1 at 6:14. Oops. Guess I was a little excitable (6:26 gives you a 19:59) . I could hardly shout out the split to Tigs since I was already commencing wind suckage. Mile 2 was no fun. Still flat but not much to look at through a residential area.  We hit the headwind again on a loop and I would have loved to have dropped out right there. Going a little slower now, but it helped with the whole oxygen problem. Tigs was still at my side. Once we hit a country road I started to pull away just a little. For whatever reason I started to feel better. Not great, mind you, but at least not begging for death like before. Mile 2 fell off to 6:34. And I knew the course was slightly long.

As soon as I saw that split I just went all in. Pushed the chips on the table and tried to harness 5 months of frustration, pain and angst into something useful. Arms started pumping , legs started kicking, and it almost, almost began to feel like my old self. I started reeling in a few people and I no longer heard Tigs right behind. Luckily I had a couple of Fitness World guys (later identified as Gene Grimsley and Jimmy Gardner) to help pace and they were proving hard to catch. Mile 3 is a long loop which initially brings you close to the finish but then takes you out for a half mile. The return half mile is a block turn and a long straightaway down main street. I saw Code at an intersection taking pics and I was finally able to break free from the pack I was in. Once I rounded the turn I was surging with adrenaline and completely redlining it.Pace was ramping up, and was able to find even another gear as I heard the Garmin beep 3 miles pretty far from the finish. Carolina running company uses a large TV set for their clock, which is tough to read from a distance, but once I made out the 19:40’s I completely headless chickened it. Hit the line at 19:55.  Woooooooooooooooooo! 3.17 miles by Garmin. 6:13 mile 3 and a 5:12 pace last 0.17. Totally psyched. 8th overall, 3rd in AG.

Tigs missed her sub 20 but she was still 2 minutes clear of the women’s field to take the win. Husband Eric got passed by a kid (Wells Thomas) but still had a blazing second place in 18:13. Pretty strong for their first race for the Reckless Running team. Angel finished 4th in 18:37 and took 1st in age group. Jimmy Gardner and Gene Grimsley ended up 1-2 in the 40-44 and 9-10 overall. Lorand Batten finished in 21:30, good for third in the “50-98”. 50 to 98? C’mon guys – way too many fast grandmaster runners to be lumped into one category. Hopefully this can be fixed for next year. Paul Reardon finished in 22 minutes and was grateful just to be pain free. Matt McGrievy finished 4th in AG in 22:24. Curtis Boyd finished in 22:37 and somehow only placed 8th in a brutally competitive 40-49. Rocky Soderberg finished in 28 minutes, surely good for first in the 70-74 but 17th in this age group system. Other familiar finishers included Brie McGrievy, Gaye McClam,  Stacy and Eddie Legg and USC baseball head coach Chad Holbrook.