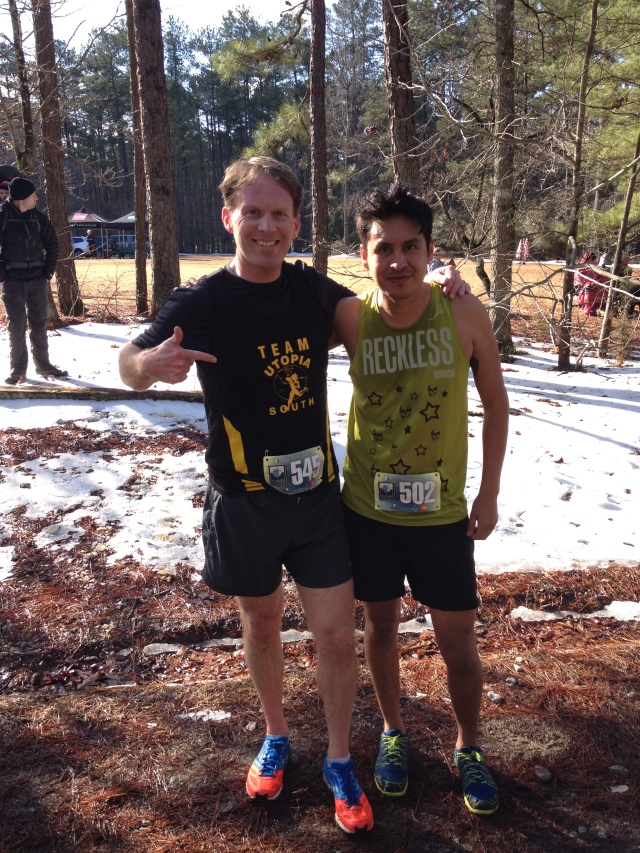 As you might of guessed from the majority of posts here, I am usually a road racer. This is not for some hatred of trails – I live right next to Sesqui state park and run there all the time. It’s me. Laws of physics state that when nearly 200 lbs is put in motion, it tends to stay in motion, so all this intertia turns me into a stampeding elephant through the forest. I’d like to think I’m some lithe, agile athlete bounding through the trails with cat-like quickness. But yeah…I’m not.

But I do like variety, and I love the Make my Day race. Its got a cool course through Harbison, and its just long enough to be a challenge without being a real struggle for endurance. And its absolutely swag-tastic. I guess because they have big sponsors in Salomon, and Suunto, and put on by a business (Half Moon Outfitters), this is no mom-and-pop operation. The shirts are always really nice quality and this year there was a pair of smartwool socks to boot. With race prices at 25 and 35 dollars, you virtually come out even before you even step foot on the trails.

This year I’ve had some recent injuries and my endurance is shot anyway, so I figured it would be good to go with their new 5k – the 12k has been around for 4 years, but this was the first time adding the shorter option. Also, this was an unabashed trophy hunt. Go green events actually has a participant list by registration – a trophy hunters dream. As expected, all the beasts were doing the 12k and I hardly recognized most of the 5k field. Sign me up, baby.  I knew this would be the case because trail specialists always like to go long, and I suspect the 5k was added to increase the number of newbie runners. I love me some newbie competition. Bring on the same day race shirt wearers, sweatpants and ipod crew. Yes, I am shameless.

Of course, this week has been absolutely nuts. My 5 year old vector of disease gave me a wicked stomach bug on Wednesday, that luckily cleared in 24 hours. This happened in midst of 3 days of snow, sleet and freezing rain. After recovering from the pukes, I thought it would be good to go sledding for hours and run 5 miles on Thursday. Obliterated me.  Then I had trouble sleeping on Friday night after losing my earthquake virginity at about 10:30 pm. Scared the crap out of me.

So race prep was less than ideal. Oh, and I decided that D’s wings and raw fries would make an excellent Friday dinner. The next morning I woke up a little on the queasy side and I went back and forth about even coming to the race about ten times. I get to Harbison and its pretty rough – cold and windy. My legs feel like jello from all the sled-induced hill repeats. The trails look like hell. There’s still a nice snow coat in the forest, and between all the melting and last nights rain, its a total swampfest.  I make my way to Harbison’s lone bathroom and its a house of horrors – apparently there has been a water main break so all the toilets dont flush. That didnt stop people from using them though. Dear God.

They had a good crowd, most of them doing the 12k (perfect). Harbison trail beasts Brian and Jen Clyburn and Rob Yerger were on hand, representing the Harbison crew with their Hairy Bison shirts. Geary McAlister and Rick Gibbons are never ones to turn down a trail run, along with Travis Cowan, Harry Strick and Ramsey Makhuli. Team Utopia had a presence with Andrew Touzel, Stephanie Dukes , Kana Rahman and Lucia Velicu. I even brought out the singlet again. Finally got to meet FB friend Jenny Prather, who was doing the 12k. Megan Weis, Sherry/Alex/Tyler Robertson, Brady Ward, Amanda Charlton, Lois Leaburn, Teresa Harrington, Dina Mauldin, Heather Alexander, Pete O’Boyle, Hunter McGahee, Dave Hale, Nina Brook and the Naylor family were some familiar faces. Some of the Dutch Fork high team. Alejandro Arreola was representing Reckless in the 5k.  He’s based out of Charlotte but seems to travel all over.

I decided to start this race easy and see how I felt. There was a big mob scene with the start but I actually didnt get carried away with a sprint. It helped a lot of the crowd was doing the 12k. This was very evident at a quarter mile in where the races split off, and you went from the wide open trail road into the forest. There were only a few people ahead of me, and I was probably doing 7:30 pace.  I’m distinctly aware of someone riding on my back and I turn and see its Andrew. Dude is drafting in the wake of the albino sasquatch in his natural habitat. But there’s no one behind him. Well, I did trophy hunt this race..but I didnt know how well.  I had seen Hunter and Alejandro peel off the crowd first but I figured us to still be in the top 10.  We had been told that we would run out to the Eagle trail, do a loop, then repeat the loop before heading for the finish. When we reached the Eagle there was a guy there directing us.

The trail is pretty funny. Total swamp. I tried to avoid all the huge swaths of water, and when I did that I stepped off the trail into ankle deep snow and leaves. Ridiculously slow. Almost walking at times. I was tippy toeing like a sasquatch ballerina on all the declines, some of which were covered in slush. I was just waiting for a wipeout. Whats worse, Touzel flies by me at some point. Oh hell no. I give Andrew the “Sydney Frontz at Safe in the City” treatment and eventually he releases himself from the breathless gorilla chasing him through the jungle. Finally the trail gets a little cleaner so that helps the speed. I feel surprisingly fresh for a 5k, probably because I’ve just completed mile one in 8:15. I’m able to throw in some good speed bursts and I start making up ground on teenage kid and very tall half moon shirt guy – the 2 ahead of me. Every time I get some speed going though, I have to stop and trudge through some slop straight from the Dagobah system. I’m actually liking the hills because at least I can be a little more aggressive and not worry about footing as much. I keep thinking about how much this will suck the second time around. Or is there a second time? I haven’t seen any markers. Suddenly I come upon a deep stream, about 10 feet across. Definitely not jumpable, especially for distance runner white dudes. Two or three steps, almost knee deep in this stream. Jenny loved the stream too – see: 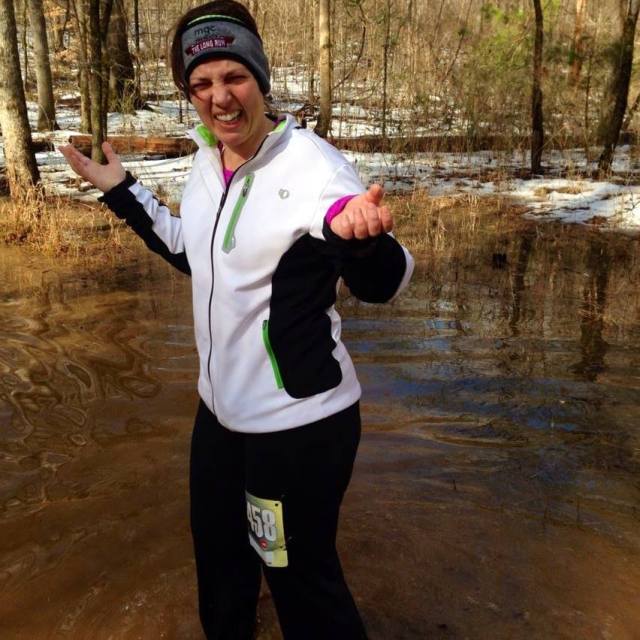 Instantly the shoes weigh a pound heavier and are numb from the sub arctic water. Awesome. Next time I wont be such a pansy ass road racer and just plow through the mud the whole time. Some guy on the trail gives us directions around mile 2 and I start recognizing the last part of every race at Harbison – a couple of nasty inclines leading to a flat tree-lined gravel road. I blast past teenager and half moon on the hill and start cruising towards the finish area, where I’m sure there must be another little loop or something. Nope. I make a turn and bam, there’s the clock. I finish almost right at 21 minutes, which I know is a joke, since I was doing what amounts to a brisk power walk through some of that slop. Yep – About 2.6 miles by Garmin.  I cant tell but it looks like I’ve finished 5th? Alejandro, Meg and Hunter are at the finish and they both confirm we’ve run a super short course. But where is Geary? He was definitely ahead of me. Teen, half moon and Andrew come in a little later and then there’s a long time of nobody. Ruh roh. Stephanie Dukes comes in and she says her course was short too, but where is everyone else? Turns out the 5k has turned into a complete cluster. 5kers continue to come in over the next 45 minutes or so, quite a few after some of the 12kers finish. Distances range from our 2.6 up to almost 7 miles. People are muddy and none too pleased. Some did the “creek fording” 3 times. Luckily the 12k apparently went off without a hitch, and I didn’t hear of any misdirects in the longer event.

Apparently there was some computer glitch in the timing and awards took forever. To their credit, the organizers gave away every bit of swag they had left in a raffle during the wait. They did, however, neglect to inform us that they weren’t doing 5k age groups, though they did do the 5k overall. I wouldnt care – but my childlike self wanted a make my day gun and of course I wanted the Tour de Columbia points. And I could have done without waiting around for an eternity for nothing. At least I did get to see the 12k awards. The results are still not up yet, so I really don’t know who won what. I do remember Dave Hale, Brian and Jen Clyburn, Rob Yerger, Anna Battiata, Missy Hunnicutt, Alfie Hipps, Nina Brook, Hope Whisman, Frank Eichstaedt and Rick Gibbons were age group winners.

The organizers did say they would give the 5kers entry into next years race, so I guess thats the best you could ask for, considering the circumstances. The proceeds go to benefit Friends of Harbison State Forest, so I wasnt going to ask for a refund. Apparently there was a rogue guy on the course giving directions that wasn’t associated with the race? Damn you, rogue guy. Hopefully they can post the 5k course online next time and patrol the route better. But definitely keep the swag factor.

UPDATE: Hey, we have some results.  http://go-greenevents.com/resultsdetail/id/1560. For some reason they changed the 5k results from order of finish to bib number. I have no idea why.  I actually finished 7th, 2nd in AG if I remember correctly from this morning.  Tim Gibbons won the 12k followed by Harbison trail regulars Kyle Buck and Robin Shook.  Strictly Running’s Anna Battiata actually won the overall women’s race with Dutch Fork’s Hope Whisman finishing 2nd. Luke Naylor took 2nd in the 12 and under, while Alex Robertson finished third in the 13-19. The Yerg took the 30-39 male, while Jen Clyburn and Alfie Hipps went 1-2 on the female side. Missy Hunnicutt and Heather Alexander finished 1st and 3rd in the 40-49, while Brian Clyburn took the mens win. Ken Sekley and Dave Hale finsihed 2-3 in the 50-59 while tri specialist Lisa Powell won the womens division by a landslide. Frank Eichstaedt won the “60-98” while Brigitte Smith finished 2nd among the women. 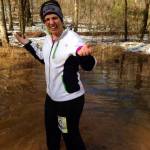