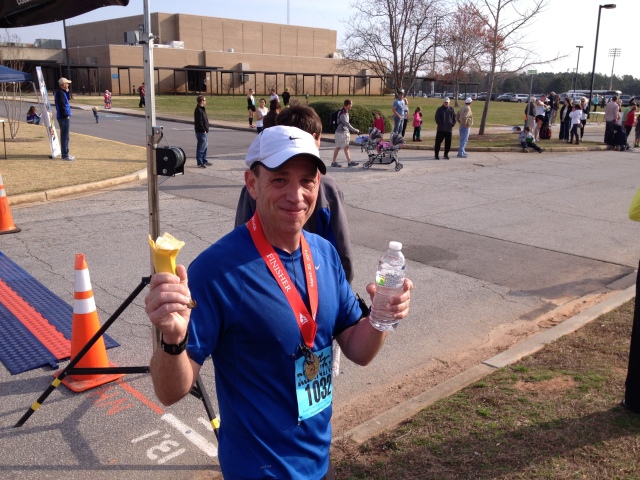 The Newberry Half is a brand new race, first announced probably 6+ months ago. This event looked pretty cool, and the race director (Mark Baumgartner) targeted the running community early on with some bargain basement prices. I think I signed up in October for this race. Not because I was raring to go run a half. I was probably three races in post cliff and was still pretty beat up. But when you see a half for 35 bucks, you jump in it. (0:18)

But despite my general recovery since then, the Achilles injury wrecked my January, and I was in no shape to race a half. Seriously, I think my longest long run was maybe 12 miles in 2014, and slow at that. My 10k last weekend was done at pretty close to 100 percent effort and it was almost right at my old half marathon PR pace, so I knew I wouldn’t be tearing it up this Saturday. I was very pleased with the RD’s communication via email leading up to the race – dude seemed to know what he was doing despite this being a first year event. I had been concerned about misdirects on the winding course, but he assured us there would be two markers at every turn and volunteers at most.

I had to wake up at the crack for this one, leaving the house at 6 am for the 45 minute drive to Newberry. Got there pretty close to an hour ahead of time. The early bargain prices apparently brought out all the racing studs from Columbia. Bishop, Erin Miller, Larry Jourdain , the Yerg, Flicker, John Bradley and Howie were just a few of the people who would be whipping my tail that day. This was a Team Utopia South approved event, so I showed off the ghostly guns in my new black singlet. Syd, Joyce, Stephanie, Lee Gallman, Tracy Meyers, Mike Compton,  Jeff and Lucia were all representing the TUS as well. CRC peeps were out in force as well with all the TUS, Jennifer Tudor, Rick Gibbons,  Pam and Mike Griffin, Mike and Kat Hudgins, Coleen Stasburger, Ken Lowden, Shirley Smith, Scott Brewer, Lorikay Keinzle, Michael Jensen, Jenny Prather, Crystal Cordoba, Kristen Cattieu, Jeff Burgess, Pamela Knapp, Lynn Grimes, Brad Marlow,  and Eleen Rodillo-Fowler in attendance.

Oh and wait. Who is that in the pre-dawn shadows? THE CODE. Making a rare 2014 appearance. Dude has been churning out 20 milers on Saturday but hasnt raced in ages. Must be afraid of the blue shoe resurgence. Or maybe not.

I was kind of fearful of the 13.1. Just no idea how to pace it given the train wreck of the past 8 months for me. I figured I would wear the giant Hokas and aim for around 7:40ish (my old marathon PR pace)  . Something that would feel like a good training run bit certainly nothing that would leave me in a crumpled mess by the side of the road. It was good the Code showed up because he was game for about the same thing (the pace, not the crumpled mess).

Start was at 8 and after we left Newberry High it was a few softly rolling miles down main street towards downtown. Bishop left the crowd for dead right off the bat and never looked back. I saw Flicker and Yerg ahead and already counted the Coed and I fighting for third in AG,  should it come down to some racing. We hit mile on in 7:44 and it felt very comfortable. It was good to see my poor brother in law, a Newberry city cop, who had to come in on his day off to help direct traffic. Sorry Jake! Burgess passed us in the first mile and seemed to be crushing it out of the gates. First 5k was really nice, running through the 1950’s style small town feel of Main street in Newberry, past the Opera House. After the first 5k was a few miles of rolling residential hills. None too bad but definitely not as flat.

There was definitely a slight drift in the pace and we were hitting 7:30’s as we neared the 6 mile point. I was a little concerned with the whole GI situation. Washing down a hamburger and hot dog with some Dogfish head 90 minute IPA the night before is probably not a fantastic pre-race fueling option, and there was some definite unpleasantness going on down below. Fortunately there were some reassuring portapotties in this area that kept me from going into panic mode. Luckily things didnt “progress”. What I did notice was the Code starting to want to drop my pasty ass. Miles 6-7 were around Newberry College and he would push ahead with me latching on like a sweaty pale monkey on his back. The pack had thinned out quite a bit, but I noticed we were starting to pass quite a few people. After mile 7 I saw Jake again and we headed out into the country. Quite a few long stretches where you could see for a good half mile at a time. I was starting to hurt a bit but it was reassuring to be at least half done.

Around mile 9, Code started really pushing the pace and I was too scared to follow him, since we had 4 miles left and I dint know what might happen with my endurance or that sleeping monster in my gut. I still have nightmares from Trophy unceremoniously leaving me for dead on Devine street at the 2009 Gov Cup (my first half). But I don’t take kindly to getting dropped either. I made a pact with myself that if I could make it to mile 10 in one piece and not Chernobylizing a portalet, I would race the last 5k. Mile 10 started on the encouragingly named Short Cut road and I started trying to pick it up. This is tough when you’ve been metronoming mile after mile in 7:30’s, and there were some more hills. Ken Lowden, who certified the course, said there was a nice downhill finish with one very nasty hill in mile 12. Mile 11 came back in the 7:20’s, so I ramped it up another notch and started hitting the downhill. Code had turned into an absolute beast and I could barely see him up ahead.  I was definitely moving at this point but he was still gapping me even worse. Thats if you call a quarter mile “a gap”.  Suddenly I came across ‘Chicago guy” from the Columbia marathon whom I had briefly met after the race. A guy who I thought was just there for that race. Well he was here again, encouraging me to break 1:40. I decided to take him up on the offer. Hit mile 12 in 7:05. Justin then appeared, presumably having finished, showered and eaten lunch. He said “the hill” was up ahead and about 600 meters long. Suddenly I rounded the corner and ran smack into it. Ho. Ly. Crap. People always talk about the evil Blossom street hill at Gov Cup. This mountain makes Blossom look like a speedbump. I always attack hills, but pretty soon my assault on Mt Newberry turned into a whimper and I was chugging along quarry crusher style on this monster. I think I passed 2 guys walking. It took every ounce of willpower not to do the same. I went from being completely outside the pain cave to being hopelessly lost in it. Even as the steepness evens out the last bit of incline feels like hell since your quads have been officially set aflame.

Finally a turn back onto Main street towards the high school . Totally sucking wind like its going out of style. I see an older guy with a Team Kattouf outfit on, so I figure he must be a tri beast. I decide to give him a taste of the blue shoe kick but damned if he didnt hold on for quite awhile. That will be me in 30 years. I glance down at my watch and see high 1:38’s and I’m already past 13.1, so I’m afraid I wont make it. I somehow find another gear and kick it in right at the high school to cross in 1:39:29. 6:18 kick after a mile 13 in 7:17 (including a stretch of almost 9 minute pace up that hill).

I’ll take it. Finished in one piece, and didn’t feel too bad despite the brutal last 1.1. Wasn’t even close to age grouping (5th). I forgot Flicker turned 40 already, but there were two other randoms that finished in front of the 3rd place Yerg. Code must have run about a 20 minute closing 5k but still finished 4th. He did catch the Burgess though and got me by 2 minutes.

In the overall, Bishop crushed the field in 1:18, which is easy for him. Clint Grant and Matt Henderson finished 2nd and 3rd male, but Erin Miller totally rocked first female and 3rd overall. She was finishing behind me in 5ks a year ago. Now, not so much. Ashley Sears finished third behind a girl from West Virginia (Gretchen McDonaugh). The legendary Larry Jourdain also finished in the top 10 and first masters in 1:25ish, followed by Scott Flicker and John Bradley among masters men. In the masters women, Joyce went out for a training run and finished first with Wendy Hart and Lorikay Keinzle taking second and third. Howie Phan and Brad MArlow took the top two spots in grandmasters while Coleen Strasburger and Carol Wallace went 2-3 among the women.

Age groupers included Doug Robinson finishing 2nd in the 30-34. He finished with Katie Rose, Jason Rose and Kristin Cattieu who all placed in their age groups. Scott Brewer took second in the 40-44. Burgess and Todd Nichoalds went 1-2 in the 45-49. Tracy Meyers finished thrid in the 50-54 while Mike Griffin took top honors in the 55-59. Mike Compton finished 3rd in a tough 60-64. Lynn Grimes won the 60-64 women, while Ken Lowden won his one man division of 65-69. Nice trophy hunt Ken!