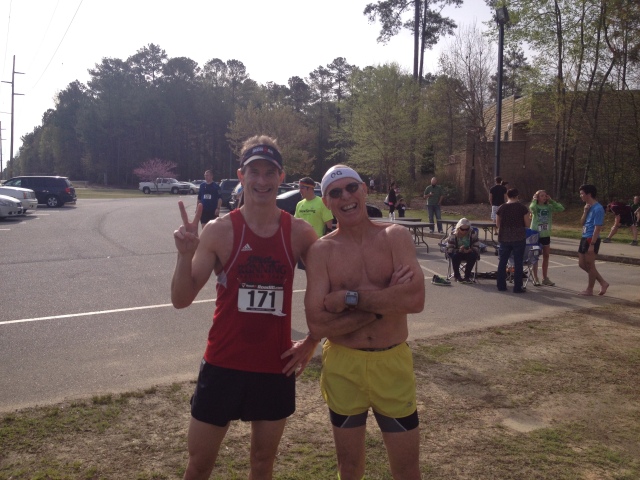 Climb the Clay is actually a renaming of the old Earth Fair 8k, because apparently the Earth Fair festival at Saluda Shoals is no more. I actually always got it confused with  Earth Fare, a crunchy grocery store that was my main stop for the best beer on the planet, Reissdorf Kolsch.

My main fear with the festival going defunct was that the race would too. Columbia has so many races that its hard for some to exist, especially when spring or fall hits and there’s like three every weekend. I still mourn the loss of the Falcon 5k, Strides for Health and the Labor Day fitness challenge, but some years the organizers decide “Aint nobody got time for that” and call it quits.

But not this race. Which is cool because this is one of the better trail races in the area. The race director Smith Harden apparently didnt know squat about racing to start off (by his own admission)  , but he has  fine-tuned this race over the years into a really nice one. Interesting course, well-marked, and timely awards – plus a cheap 20 dollar advance registration rate.

It’s also a great trophy hunt. The field is usually relatively small (i.e. 50-70ish) and the race is often held on a popular weekend with lots of other competition. I think it had to go up against the Palmetto Half last year which really hurt it and made me fearful of race death. But this year was better. Most race organizers avoid the Cooper River weekend, fearful it will suck away all their potential runners. Sure it will take some, but there’s often been bridge run weekends with virtually no races in the area. I’ve always thought this to be golden opportunity for a local race to step in and avoid what usually is a brutally competitive environment for races in the spring. Climb the Clay decided to test the bridge run weekend waters this year.

Which apparently paid off, because they had a record number of runners this year. They also provided online registration, which helps, because its not 1985 anymore. They used go-green, which, although I am a bit of a Strictly loyalist, is nice to provide a participation list. This list is a trophy hunter’s dream, because you can scout the whole field at a glance. One look on Thursday showed that the fastest guy on the list was Ken Vowles. What? It was totally on like Donkey Kong. No way I was going to let my archnemesis claim this glory, and quite possibly the holy grail – the overall win. I had already imagined a Duel in the Sun between two pasty thirty something dads battling it out in Saluda Shoals. I texted him to make sure he was prepared for such an epic showdown.

But then I saw on facebook that Brandenburg and Robbie “OG” McClendon were going to run it too, so that pretty much eliminated the holy grail. Still an outside chance at the top 3 and there’s always the 35-39 AG up for grabs.

I got to Saluda Shoals and it was beautiful weather – a little on the warm side even. When your last weekend involved 2 runs in tropical storm like downpours, you will take 65 and sunny all day. A nice crowd was on hand – Ted Hewitt, the OG, JB and Barb, Sarah Blackwell, Joe and Luke Naylor, John Richards, Wes Spratt , Dina Mauldin and of course the Vowles were all representing. Meg Weis decided to come out after me, JB and OG hijacked her facebook post the day before about not doing the bridge run this year.

The course was switched up this year so we were actually starting the race right near the finish line instead of up the road near the river center. With the start JB and OG surged ahead immediately, while I tried to hold back. I know I still dont have my endurance back, and trails have a way of sapping my energy in way that the roads just dont do. I settled into a pack with the Vowles, Meg and Ted in the first mile. Ted was getting a bit frisky and was slowly gapping us while Meg and I traded places a few times. Garmins are always suspect on the trails but hit mile 1 in 7:24, which was about what I was expecting with all the twists and turns. I kept waiting for “IT”, i.e. “THE CLAY”, the nasty monster of a hill in the middle of Saluda Shoals for which this race is named. I mentioned this to Vowles who thought I was engaging in psychological warfare, ala my March for Meals strategy. OK, maybe I was. Finally I see OG way up ahead start trucking upward and I realize its coming soon. The OG has already seemingly put a quarter mile on our mini pack. A couple of turns later and bam – there it is. The clay monster rising suddenly out of the forest. Low 7 pace turns into a crawl as I awkwardly try to scale up this beast. There is no cool way to do this. I’m pretty sure I looked like a blue backed albino spider escaping from the light. Thankfully all the deluge from last weekend has dried and its not nearly as bad as in years past. That doesnt mean my legs dont feel like theyve been dipped in a hot lactic acid bath by the time I reach the “summit”. First wind suckage commences and Vowles decides to drop my ass. Meg takes the hill hard and is already talking about having a crap race. I wish I could do that and still have first overall, which was exactly her position at the time.

I started settling into a major debbie downer funk at about this point. Just couldn’t get comfortable and Ken and Ted were leaving me for dead. Started thinking about how bad I suck on trails, how the inertia of the giant melon and sasquatch physique make it hard to turn all these tight corners, how the warmth and humidity sucked, how maybe my training wasn’t  paying off..Wah wah wah . 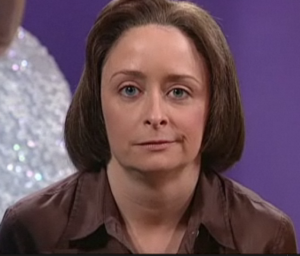 As we hit the 4k point (CTC is the only race I know using metric markers) we finally hit a fairly long stretch on flat pavement, which couldn’t have come at a better time. I was able to stretch out and seemingly flush out some of the lactic acid bath from the clay mountain. Meg was having a rough day and I think I left her at this point. I could see Ted and Ken in the distance with one 30 something looking race-shirt wearing dude in between. I was about to go from fighting for the holy grail to barely getting third in age group. Wah wah wah. Once we finally hit some more woods, I was feeling better and started trying to pick up the pace. I managed to catch up with race shirt guy who was hardcore boxing me out on the trail. I tracked him down like a rabid monkey until I found an opening and totally off trailed it elephant stampede style. He tried riding my tail for awhile but I pulled an Emeril and kicked it up a notch until I couldn’t hear him. I was pretty close to phoning it in after this, but I finally looked up after a technical trail stretch to see Ted and Ken noticeably closer. We hit a clearing and I threw down a hard surge. Just before another woods section, the Vowles must have noticed a blue blur and looked back.  Oh, its on now.  Another notch got kicked up as I chased Ted and Ken through the woods and caught them just as we hit a paved area. As soon as I pass them I’m already worried I expended too much energy catching them. Its at least a mile and a half to the finish. Oh well – the chips are already pushed in and all I can do is hold on for dear life. I pass the 6k sign and my rough, oxygen deprived metric conversion in my brain says there’s about 1.2 miles to go. I catch a glimpse of someone up ahead. Its the OG! Apparently I can be running completely on fumes but the mere faint possibility of me blue shoe-ing someone jolts me into action. I’m slowly gaining on him but I know he can sense the finish too. The OG’s kick is legen…wait for it..dary. I hardly ever get passed in the final quarter mile of any race, but the OG geezered me hardcore at the 2010 Get to the Green, producing this classic finish photo: 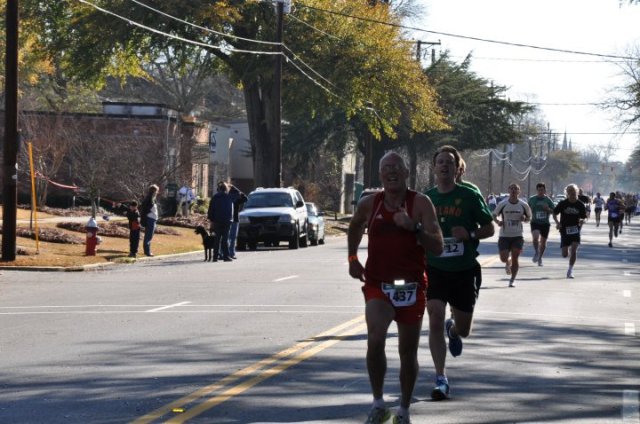 I was starting to make some major headway on OG when all of a sudden we came out into a clearing where you had to run along a bank and then onto a wooden bridge across a swampy area. If he didn’t know I was coming before he sure as hell could hear some elephant bearing down on him from the noise from the bridge.  He’s not more than 20 meters from me now but since my cover was blown he is really getting it. Damn that kick. I am blasting it out now in full blue shoe mode but like Drago from Rocky IV, he must break me. And he does. Just cant find another gear and I’ve come up against a wall in the pain cave. I finish in 35:50 something, about 5 seconds behind the OG. Not too bad considering my suckage on the trails. Good enough for 5th overall and 1st in age group. My real prize was getting to capture Vowles’ finish on camera. It was beautiful.

This race is still old school on the finish, as they rent our 25 year old Columbia Running Club clock and do bib tags on a ring instead of chips. So I dont have results as yet. Good to meet TDBS reader Malechi at the finish line – good luck at the Quarry crusher!  I know Brandenburg took the overall win followed by 2 guys I don’t know. Meg took the women’s win. Ted took his age group and 6th place overall, with Vowles next in 7th and 2nd in AG. John Richards took 3rd in AG. Sarah Blackwell had a brutal day with an IT band issue but still took home some hardware. OG took the masters win. Barb Brandenburg took at least at AG win if not masters.  Wes also took home some age group glory. Joe and Luke Naylor each got an age group award – Luke had a tough day but ran all the way with our warm down group to the finish, picking up his dad along the way. That was awesome.

Next up…Palmetto Half next week.