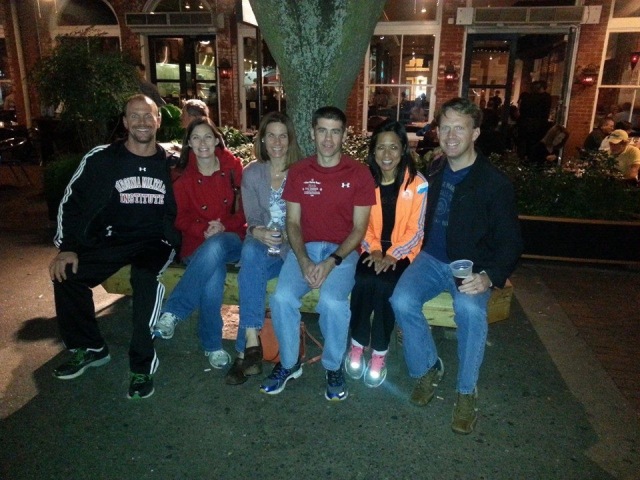 That’s what I told myself back in April when I convinced myself to head back to Savannah for the Rock and Roll Half marathon.  There was a big group going down from Columbia, many inspired by Team Trust – the group assembled in honor of Jake Zeman, the Columbia runner who died near the finish line last year.  The course is super flat, the weather is usually ideal, and the town is beautiful. What’s there not to like?

Well, the only problem was that was my same thought process in 2013. I was in my peak running shape, all signed up for the full marathon, and ready to make my run at Boston 2015.

And then Hawaii happened. Control-Alt-Delete.

As it turns out, wrecking most of your body and missing 3 months of running is not on most marathon training plans. But I did make it a point, that, hell or high water,  I was going to make it down there. I ended up backing down to the half and pacing Ashley to a sub 2 hour time. I’d like to say I did that with ease, but having only hobbled a few 6 milers before the race, that 1:56 was no picnic.  I thought I might have lost her at the end, but she epically blue shoed me right before the finish line. I was so proud.

I really didn’t know when, or if, I would be able to tackle long distance again after that race. The gimp toe just didn’t like it. I was able to slowly build back some miles over the next few months,  feeling like I was clearing up the wreckage from some disaster. My legs had turned into mush, I had put on some pounds, my cardio had gone to crap. My pure sprint speed, always my strength, just wasn’t the same with mr. mcgimpy toe.

But somehow things got a little better this spring and I started getting faster. It peaked with my ridiculous win in the Resurrection Run, and I think the grandiose glow of this accomplishment led to me throwing my hat back in the ring for a fall marathon. This time it would be Kiawah, with the Savannah Half as a training test about a month out.  I hit Justin’s Team Utopia South training program with a vengeance. It was, and is, brutal. I’ve been putting in 50-60 mile weeks and feeling tired a good part of the time. I was training right through races so I had accumulated some confidence –deflating results, especially Ray Tanner.

I was actually giving myself 2 whole days off before Savannah this year. It felt like an eternity. The Code called me the day before and said Shannon and Joyce had two spots open in their condo, so I quickly dumped our crazy expensive $330 a night hotel (this is typical for marathon weekend in Savannah) and shacked up with them. Code said he would take the couch when we got there, but the queen Tempur-Pedic was too much to turn down. Now I have Joyce’s “snuggle bunnies” photo that will probably follow me around as long as my “tri fail” pic.  According to my wife, though, I made the right choice in sleeping arrangements. Friday night we participated in Shannon’s pre-race pizza ritual with Jeff and Andrea Godby at Vinnie Van Go-Go’s, which was amazing. That led to me participating in my pre-pizza ritual, consuming large quantities of beer. I hoped that decision wouldn’t come back to bite me.

Race morning was pretty much perfect. Temps in the 40’s. Not much wind.  Shannon left early since she was doing the marathon and had to find Jeff, who was acting as her first half pacer. I had planned to do a two mile warm up with Joyce and the Code but ended up doing portapotty intervals with all my aggressive rehydration from the previous night’s beerapalooza.  Code and myself made our way to corral 1 and found Scott Flicker, who was doing the full in a BQ attempt. I felt good but my races in the past month had me with pretty low confidence. I figured I could target the 6:54 pace needed for a 1:30 and see what happened. My PR was set at the Charleston Half way back in 2012, 1:30:22. The sub 1:30 had been one of my goals to break before I decided to break my leg instead last year.

The start was pretty insane.  There were like 17,000 people in this race but luckily we were separated by pace in corrals. I had thought corral 1 would be fast but there must have been a lot of people with grandiose streaks, because this mob scene was shuffling like a herd of cattle. It took about 25 seconds for me even to reach the start mat. The whole first mile I was in full tailback mode, trying to find any crease or seam I could. Code apparently has better running back skills than me because he was leaving me for dead right off the bat. So much for his “marathon pace” tempo run he was blabbing about. Of course knowing Code, I knew this was complete crap.  I caught up with Shannon and Jeff about a half mile in and wished her good luck, completely ignoring Godby who was feeling all hurt. And I thought I was the attention whore.  The first mile has the only real hill on the whole course – a trip up a highway overpass. With the hill and all the dodging, I thought for sure I was at 7:30 or something. Surprisingly, my Garmin spit out a 6:54. Right on target.

The next few miles are a lovely tour of Savannah’s finest pawn shop and title loan neighborhoods. Not the most scenic, to be sure, though I do admit the residents were out in force and vocal. Much better than some off the stuffy historic districts. My legs were good and warmed up by now and everything felt completely different than my last few races.  Like I had energy, like my legs weren’t  cinder blocks. Psychologically I was still in full Debbie Downer mode – surely this wouldn’t last, there’s so long to go, blah blah blah. I decided to try and block it into race distances I was familiar with, so I started with the 5k. Miles 2 and 3 were high 6:40’s and I crossed the 5k mark at a little over 21 minutes.  I was pretty astounded by this – my worst 5k this year was around 20:40 so this was blazing for a half.  I was cautiously optimistic, but far from getting too excited – still 10 miles to go. The slog back to the historic section was often right into the sun so I kind of drifted into a zone at this point.  I had settled into a nice pace and clicked off a few high 6:40’s. I was banking a few seconds against the 1:30 so this would be good later on when I was sure to fade some.

I woke up some when we entered the heart of the historic section just as the 10k point was approaching. I was still feeling pretty good, maybe a little fatigue. I hadn’t trained with GU at all this year, but for some reason I brought my old espresso love gel  this time.  Just before mile 6 I took the gel and realized how much I hate GU. It did seem to give me  a little boost though, plus the crowd support is great right around the relay zone (theres a marathon relay in addition to the half and full) . The 10k was just over 42 minutes by the main clock. Subtract 25 seconds or so and I had just run my fastest 10k since Cooper River right before Hawaii.

Instead of making me more confident, I was actually more afraid that this was going to lead to an epic bonk. The Debbie is quite strong with me.  I purposely slowed a touch and hit mile 7 in 6:55. Ruh roh, here it comes.  But at some point I realized that the fade just wasn’t happening. My legs felt strong. The course was flat. The weather, perfect. GO FOR IT. 10k to go.

With that I took off.  I started catching people. First slowly,  then in big groups. What was once a huge crowd now thinned to a group like a local 5k. One guy didn’t take too kindly to getting passed and told me to “go get those 5 more miles”.  I took this moment of douchery and used it to reel off a few  6:40’s, making sure to drop that dude good. When I reached mile 10, I got the first twinge of euphoria that this was really going to happen. Not only was I a good minute under 1:30 pace on the big clock, but I knew I had another 20+ seconds on top of that. I figured about a 22:30 5k would get me my goal.  I took my first tentative step inside the pain cave and decided to kick it up a notch. Mile 11, 6:31. I was starting to suck some wind, but I was completely jacked up on adrenaline. The crowd was getting more and more sparse.  After passing hundreds of people I finally got blue shoed myself by some super lean bearded guy in a singlet, but then realized he was doing the marathon. No one else had my Sasquatchian physique around me, so I knew was blazing it.  Just after 11.5 is the split from the marathon course and it’s a straight shot to home, except for the last curve right at the finish. There were a few soft inclines and I actually faded a touch to 6:40 again in mile 12. But as I passed the last mile marker, I saw a familiar gait in the distance. THE CODE. By this time there was some hurting going on, but the euphoria of the impending finish was incredible. I kept gaining on Code the whole way in. I knew at some point I couldn’t catch him, but I was at least going to make it close.  The finish is a turn into a tunnel of people and noise and I was in full blue shoe kick by this point. I saw Code cross the line and looked up to see low 1:28. I sprinted it out on pure adrenaline and probably scared half the spectators with an Incredible Hulk yell at the line. 1:28:40’s by the big clock. 1:28:29 official time /6:44 pace.  Ho-ly crap.  PR by almost 2 minutes and 70th out of 10,000+.  To say I was a little excited would be the understatement of the year.

Soon after I saw Jeff finish and we realized Shannon was absolutely crushing it. She was on 3:10/11 pace through the half. I had brought my phone in my spibelt fanny pack like my usual dork self, but it was nice to be able to track people live. Joyce came blazing in way ahead of schedule and I barely got a pic of her finish. She got a 1:40 and a big PR, which even qualified her for the super strict New York Marathon automatic qualification standards. We hurried back to the condo to change but was way bummed when we just missed Shannon’s finish. She crushed a 3:11, not only a BQ by over a half hour, not only first masters, but 4th overall. Incredible. Scott Flicker came in 2 minutes later and punched his ticket to Boston 2016. Other Columbia area finishers included Betsy Long, Katharina Vorhauer, Winston Holiday, Julie “Flashbang” Bitzel, Sydney Frontz and Brad Marlow.