The Main Street Crit is now in its 3rd year, this time with a big change by being held in the afternoon and attaching itself to the Famously Hot New Years party put on by the city of Columbia.

This is a really cool, unique event. I’m not sure its exact origins, but Steven Johnson and some of his fellow 621 ninjas thought of the idea to bring a criterium style race to downtown, hold it at night, and ramp up the excitement with an elite race after everyone finishes. I had a blast in the first two years – I never get a chance to see pro runners live, and apparently pounding 3 or 4 post race beers makes me a very vocal spectator.

As anyone who’s ever watched a road race knows, watching a regular road race is not super exciting. You basically get two chances to see who you came there for.  A criterium involves multiple loops around a short course, so you get to see everyone every half mile or so. In the case of the Main Street Crit, 6 loops for the 5k, and 10 for the elite 8k.

No beer this year with the race in the afternoon, but the daylight would at least help with the runner traffic on the course. Plus, I needed to pace the alcohol anyway since it would be a long time ’til midnight on New Years Eve.

Unfortunately I was still riding the snot train that started the night before Cold Winter’s Day.  Speaking of CWD, I was contacted by multiple people about my performance there, basically asking what the hell was wrong with me. Apparently I’m not allowed to go less than 100 percent or people think I’m dying.

So I was going to do my usual balls-to-the-wall 5k this time around, if anything to avoid all the faux concern and trash talk. I was hating my decision when I got there though, since I was still hacking like a pack-a-day Marlboro habit. I ended up getting there so late I really didn’t have any time (or motivation) to warm up other than a jog to and from my car. There was a decent crowd this year, about the same as last, but again packed with lots of road racing regulars. Most of the ninjas were pulling volunteer duty or racing, with my marathon twin Shannon Iriel race directing.

I tried desperately at the start to get a Garmin signal but I guess all the tall buildings were blocking the satellites. Alas, I would be running “naked”. You would think a 6 lap course with a time clock wouldn’t require a GPS device, but somehow I seem to believe the miles disappear if not fully recorded on Garmin Connect. At any rate, I kind of blasted out of the gate with all the fast peeps around and the pancake flat course. There was a band at one corner playing Rage Against the Machine, which was awesome since most race musical selections include
“Running on Empty”, “Born to Run” or any other song with “Run” in the title. The first lap is actually only a partial one, maybe 3/4 of the two blocks. I had already been running too fast,and the wall of noise and spectators as you cross the finish area didn’t help.

And that’s about the time I started feeling like death. Lungs just couldn’t get my usual breath and I had to hack up a lung a couple of times. This was going to hurt. Will Brumbach, (who hardly ever races but always gives me trouble when he does) comes flying by me and basically drops me right away. I hear Geary’s industrial machine breathing behind me tracking me down. I notice the back stretch is actually painfully a slight incline, which ends in a smoke haze of the Sumter city bus station. I’m in a world of trouble by lap 2 and I’m afraid I might have to drop. Everything feels slow and Geary eventually passes me.

The rest of the race is pretty much a haze. The next three laps, by Strictly’s record, have me running about the same pace, slowly bleeding a couple seconds. It was great to get some adrenaline in the finish area each lap because that was about the only thing keeping me going. Plus, I saw the Pale Beast had arrived to watch, so I couldn’t let him see me drop.  The dude made it a point to beat me in the Tour de Columbia this year, and he had already clinched it . He may or may not  have received this gift from his wife: 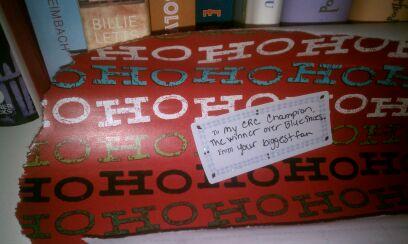 Somehow I passed Geary at some point but I could hear him close behind. I started to lose touch with the field with all the laps and I had to concentrate on not freight training people that I lapped.  Speaking of lapped, OJ Striggles blasted by me on my lap 5 and cruised to the win in just over 16 minutes. It was painful to see him finish, but I had to put the jets on as not to also get lapped by Justin, who I could hear just behind me. I managed to avoid that by exactly one second. The last lap I threw down as hard as I could, which wasn’t a whole hell of a lot. I was making some ground on Brumbach but I had nothing left in the tank to do my usual headless chicken sprint to the finish. I somehow finished in 19:29, 2nd in AG behind Will. That’s not to say I didn’t finish ugly. You can count on that:

I rarely have felt that bad in a 5k so I was pretty thrilled with the time.

Among the women, Erin Miller was disappointed with her time but still was good enough for the win in 19:06. MC Cox gave me the beat down and finished 2nd in 19:23. Anna Johnson of Dutch Fork also kicked my butt – I couldnt catch her in the home stretch and she took 3rd in 19:26.  Female masters included Linn Hall  taking the win, just outkicking Sarah Allers 20:13 to 20:17.  Sarah turned in another 85+ percent age grade performance. Male masters was won by Jason Gibson, with Geary and Winston Holliday taking 2nd and 3rd.

Age group honor roll: Ian Clawson barely won the 11-14 by like 7 minutes. Brittany Robbins won the 15-19 girls. Samantha Yeoman won the 20-24. Marian Nanney took 2nd in the 35-39. Colleen Vowles claimed the 40-44 with Jennifer Glass 3rd. A trio of familiar faces in the 45-49 with Randy “don’t pronounce the H” Hrechko , Jim Fadel and Tim Hewitt rounding out the category. Jennifer “JR” Reeves finished 2nd in AG despite me catching her with the walksies. Joe Roof and Phil Togneri had a photo finish (same time) in the 45-49 but Joe must have outleaned him to bring home the win. Anita Recchio, Jeanna Moffett and Lisa King swept a very competitive 50-54. Likewise with Pete O’Boyle, Kyle “Ghost Rider”, and Larry Bates in the 55-59, all just over 21 minutes. Dolly Rodgers took 3rd in the female division. Mary Howk threw down an incredible 23:23 at age 63 to take the win in her AG, while Pete Poore and Leeds Barroll won the men’s 60-64. Alex Ponamarev won the 65-69.

Other finishers included Andrew Touzel, making a return to the racing scene. CRC officers Sheila Subbarao (on a comeback, now down to 28:11) and John Gasque.

The elite 8k was awesome to watch after the open 5k, even while completely sober. Kipkoech Ruto crushed the competition for the win in 22:52 (4:36 pace) and just missed the state record set last year at this race. CWD winner Adam Freudenthal finished 6th in 23:27, just ahead of Running Times cover guy Matthew Elliott. Ricky Flynn took 9th. Eric Ashton and Tim Jeffries were locked in a brutal one-on-one battle the whole way, with Eric outkicking Tim in the last lap for the win. The women’s race was also hotly contested, with a large pack separating only in the last lap. Kimberly Ruck took the win in 26:32 ahead of Alyssa McKaig and Charlotte’s Caitlin Bullock. Major props go out to Shawanna White for breaking the 30 minute barrier and claiming a new PR in 29:49.