The MLK 5k is a fairly small race that actually one of Columbia’s oldest, now in its 25th year. While small, the race has often been the first Columbia area race of the Palmetto Grand Prix, which typically brings out all the big dawgs looking for points. Its put on by Alpha Phi Alpha fraternity, with proceeds going to support their charity Bridging the Gap with Alpha.

It seems like a nice course on paper – most of it is in Shandon with the start and end fittingly at MLK park near 5 points. What the course map leaves out is the fact that MLK park sits in the valley of the little-known Old Shandon mountain range. Consequently, the first half mile in this race is spent climbing out of said valley before going on a relatively “flat and fast” Shandon loop, before cliff diving back into the park. Well, at least I have the cliff dive down pat.

I did my first MLK in 2010, when they had postponed the race from January to June.  This was briefly after my first sub 20, and I had no idea about the opening climb. I sprinted up the mountain like a boss, only to die a thousand deaths the rest of the course, producing one of my early race faces – see here:

Head to one side, arms locked in pain, grimace/scowl from hell. Yep, that’s me. It looks like I  got shot in the back attempting to do the twist. Beautiful. It didnt help it was like 90 degrees either. I missed the race with an achilles injury last year, but 2013 was my course record, a 19:15. But that time was when I was doing sub 19’s in prime 5k shape. The last month has been a mixed bag of marathon recovery, post-Christmas snot fest and basically no speed work (other than races of course).  So, no idea what to expect this time. On the plus side, the mucinex guy has left my lungs, allowing for adequate oxygen exchange again. That tends to help with running. On the negative, running in my old new balance minimus shoes to avoid getting my precious blues wet left me recovering from a sore heel this week and fretting about the evil plantar fasciitis. But hey, racing down a mountain at 5k speed is good for PF, right?

Right. Anyway, I figured this might be a relative trophy hunt this year. The Grand Prix isnt happening in ’15, and though this is on the Tour de Columbia, it seems a lot of people are focusing on next week’s flat Red Shoe Run 5k/10k. My archnemesis, the Pale Beast, is sadly on injured reserve, as is the Code. Angel does this race sometimes, but he’s just been a spectator or pacing Meme the last few years. None of the other 35-39 rivals have done this race, though that doesn’t mean there wouldn’t be a random Brumbach sighting or one of the stealth superfit soccer dads ready to crash my hunt.

Got there an hour early and the registration table is already set up and ready to go. Most races I show up and they can’t believe some freak is already here.  Pretty on point for a bunch of college guys.

I’m not there more than a few minutes before I see my trophy chances getting a lot slimmer. OJ Striggles, Plex and Brandenburg are all on board. Yeah, the holy grail (i.e. the overall win) was not to be had at this one. Plenty of familiar faces in the small crowd. James Hicks was ready to pick up some 35-39 points, since none of the other regular age groupers were there (though I keep forgetting OJ is in our group – doh!). Thomas Beattie was replacing Wes Spratt in JB’s tri entourage, with Barb filling out Team Brandenburg. Albert Anderson and Arnold Floyd were sure to make the 65 and 70 year age groups faster than almost everyone else. Pete Poore was out for his 25th consecutive MLK – now that deserves a trophy. His main rival, Alex P., has now aged up to the 65’s, but still ready for a Poore/Ponomarev showdown. Eric McMichael was ready to test his new masters wheels (just turned 40).  John Gasque, Lisa Smarr and Rocky Soderberg were representing just a few years of CRC membership. Newly minted CRC member Leeds Barroll was out to add to his 2015 TDC point collection, having already started at Resolution run. Laurie Royson is grooming a next generation CRC/TUS member with  son Cotes. Dutch Fork’s Anna Johnson was there for an easy win.

I did a mile or so warmup , jogging up the hill, which reinforced in my mind what I already knew: this was going to suck. I was breathing hard doing 9 minute pace. Ruh Roh.

And suck it did. The start gives you zero flat time to warm up – just straight up the face of Mount Preston Road. I hate slogging up hills, so I try and attack it the best I can. Yes, the hill is getting done quicker but my lungs are getting the beatdown of their life. Two weeks of easy running did not prepare me for 5k pace+mountain. As soon as I reach the summit I’m relieved, with a turn on King, but sucking this much wind less than a half mile in cant be good. JB comes up from behind and passes the gasping Saquatch like I’m standing still. Not two races in a row. I make a point to keep him in range. Anna J, who I’m sure is quite literally half my weight, is using me like a giant windscreen. I’m sure I’m good at that.    There’s another nasty slog up the incline right before Hand Middle School. OJ and Plexico are already in another zip code but there’s one random in between. I have a sixth sense about detecting 35-39 year olds but I decide he’s a good bit younger. He starts to fade almost immediately though and we pass him in front of the school.

The lungs are still complaining about all the previous climbing and I’m not even a mile in. Briefly I contemplate mailing in the rest of the race since there’s no further age group glory to be had. But its Saturday and I have a bib on, and my giant melon will have none of that. JB has gapped me by about 20 meters and Anna is  on my shoulder, like a 90 pound monkey on my back. She keeps surging ahead, engaging in Billy Tisdale-esque psychological warfare. First mile was like 6:27, which isnt too bad considering the climb. That’s right on 20 minute pace, one that I had ingrained in my memory in my 18 month pursuit of the 19:59.  Unfortunately the lungs will not have any ramping up of pace.

After a long slog on Heyward, the turnaround is on Sims.  About this point is when I realized that my lungs had finally calmed down and things felt a little easier. And hold the phone..is JB getting  closer?? I managed to pass Anna at some point on the return on Wheat and hit mile 2 in like 6:24, which is irritating since I guess it was all recovery from that first climb. Time to throw down. Wheat is pretty nice and flat and once I make out Woodrow st up ahead I decide to basically empty the tank. Right at the Woodrow crossing is when I finally catch JB. I would have liked to make a snarky comment but there was no air, and plus, he might catch me. With the turn on to King again I’m in full-on headless chicken mode, which isnt particularly good because the finish is over a half mile away.  At the Devine street crossing, Jordan is screaming at me at the top of his lungs something about “this is what you live to write about!”  just before he screams at JB about getting blue shoed.

One more incline on King about kills me, but then you get dumped off onto Preston for the cliff dive down to MLK park. I cant imagine the ugliness of my form on the way down, but I’m sure there was a lot of flailing limbs and head bobbing. Thank God gravity is my friend because I was on fumes. I kept waiting to hear Brandenburg footsteps. One last turn to a straightaway in front of the park and I can see the clock. Red digital numbers apparently cause me to go into convulsions because I find another gear and sprint like there’s no tomorrow to the line. Crossed in 19:19 , 3rd overall. Last mile: 5:52. I crash out like I usually do at the finish, and damned if JB is just now making the turn. His spirit must have been broken. I can barely move from sucking so much wind, but I manage to pull out the iphone just in time:

It would be more triumphant if I wasn’t on the ground from all the effort, but I’ll take it. My JB victories are few and far between.

Age group glory: Cotes Royson blazed a 25:42 and a new PR to take second in his age group.  Kyzer “A.J.” Garrick completed his first 5k in 29:33, being paced in by Lisa Smarr. Both got first in age group for their efforts. James Hicks took home the 35-39. Eric “King of the Quarter” McMichael took 2nd in the 40-44. Tom Beattie won the 50-54, while John Gasque did the same in the 55-59.  Pete Poore and Leeds Barroll took 1st and 3rd in the 60-64.  Albert Anderson and Alex Ponomarev went 1-2 in a super competitive 65-69, with Brigitte Smith taking the women’s division. Arnold Floyd (72) continues to make runners half his age look bad in winning the 70+, with Rocky Soderberg placing 2nd with his patented 1966 SEC mile champion kick. 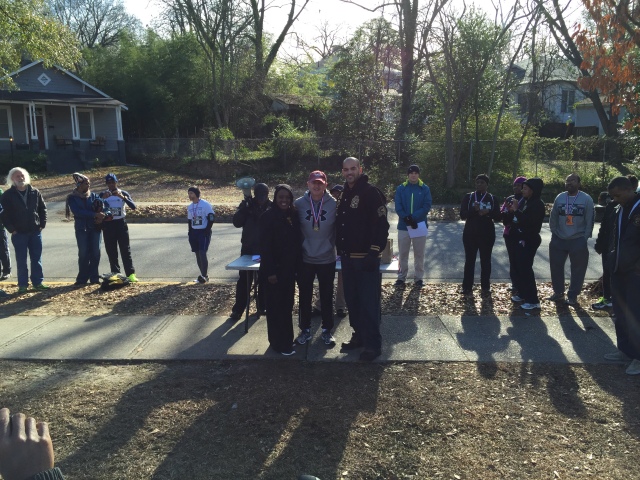 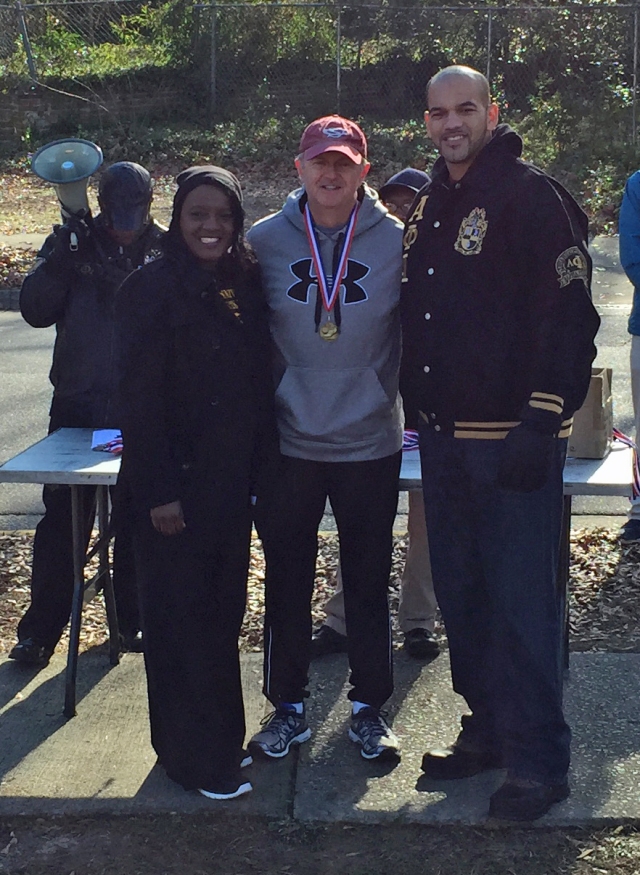 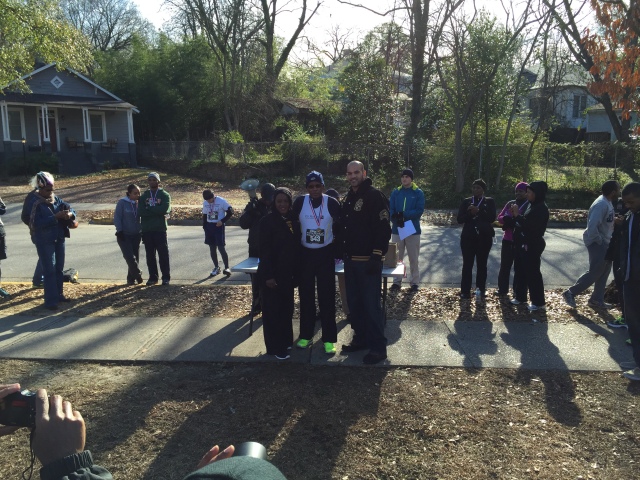 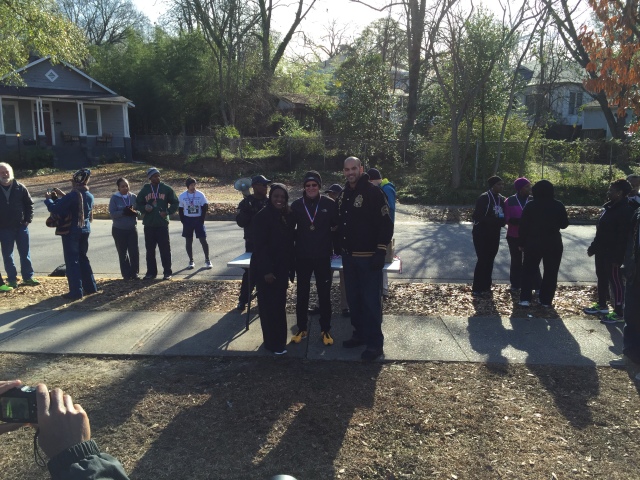 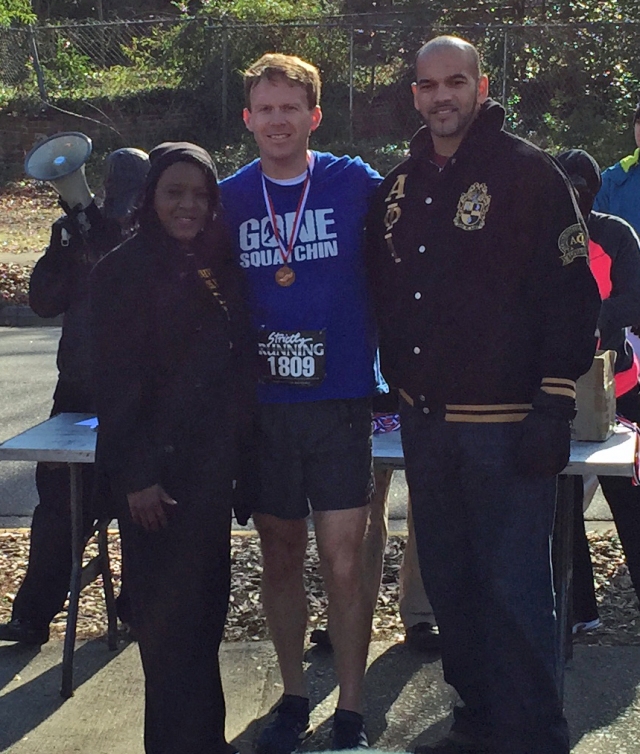 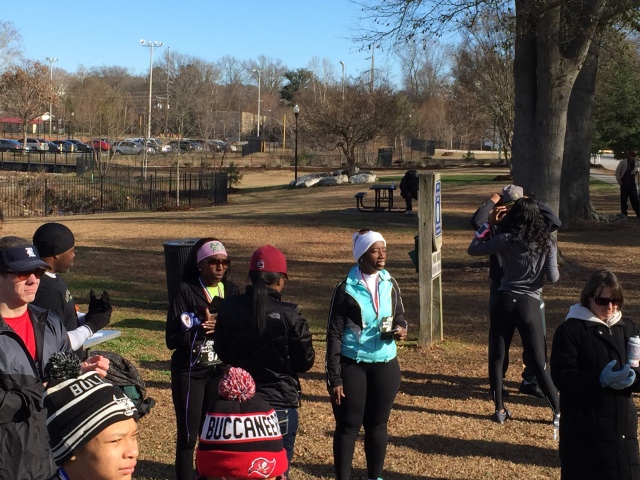 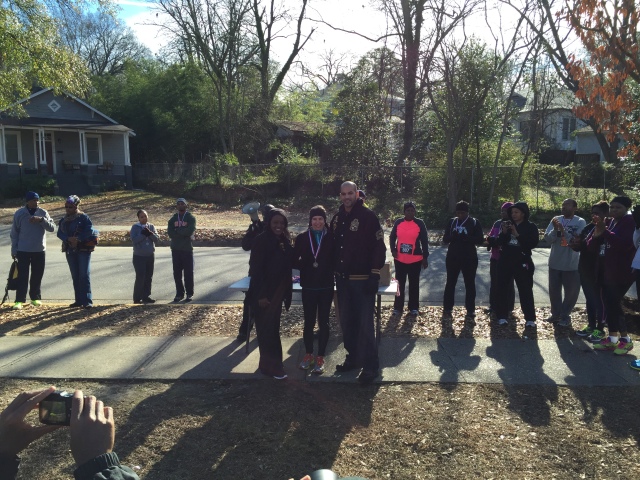