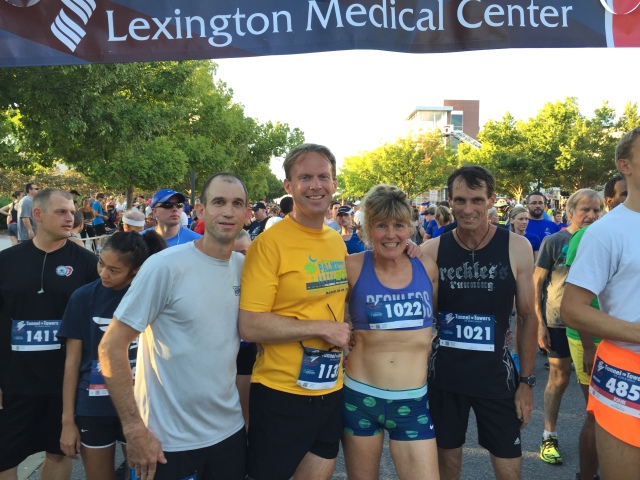 The Tunnel to Towers 5k is one of a series of 5ks across the country put on by the Steven Siller Tunnel to Towers Foundation, which goes to benefit firemen, police, other first responders, and the military. Steven Siller was a firefighter who lost his life on September 11 at the World Trade Center, after he ran through the Battery tunnel back to the towers (hence the foundation’s name).

I got a chance to see this race in its first year in 2013, when I was still beat up from my Hawaii cliff dive and had to spectate. It’s a really cool event – the road race really pales in comparison to the hundreds of military and other first responders who show up to run/march in unison. I made it a point to come back and actually run it when I wasn’t nursing multiple broken bones. I think I was out of town last year for the race, but when we added it to the Tour de Columbia in 2015, I was in.

Or… kind of. This race is held on a Friday night, with the Dam Run to Irmo 10k the next morning. I told everyone I was going to do one or the other for the past few weeks, I just needed time to decide. Then I had a momentary Stella-Artois- induced lapse of judgement in front of the computer and went all in for both of them. I know, I need help.

Fast forward to Friday night and I’m already regretting my decision. The first blast of fall we had earlier in the week gave way to a last hurrah sucker punch from the 400 pound gorilla of a Columbia summer, pushing temps back into the mid 80’s. I was sweating on my way to the car. This was going to be brutal. Got there about 45 minutes early with the Code, pulling photo duty once again. The place was packed – looked to be over 1000 people. Not a whole lot of recognizable runners though, which bade well for my unquenchable thirst for trophies. I didn’t see too many big-name elites, presumably because all the studs were going to be doing the Dam Run (I was proven quite correct the next morning). Sarah and Eric Allers, the Yerg, Brad Marlow and family, Mike Wainscott, Teresa Harrington, Lois Leaburn, Mario and Jennifer Tudor, Peter Mugglestone, Rocky, Henry and Margaret  Holt, Alex Ponomarev, Mike and Pam Griffin, Marian Nanney, Pam Inman, Dawndy Mercer-Plank, Marlena Crovatt-Bagwell, Cheryl and Tommy Outlaw, Kate Ferlauto, Ron Hagell, Sharon Cole and John Zemp were a few of the familiar faces.  I didn’t see any of my usual age group archrivals, though clearly Eric (now 45)  was going to block my masters hopes.

I didnt get a chance to run the course, but it looked to be a simple Connecticut-shaped deformed rectangle, going across the Blossom street bridge and coming back on Gervais, similar to parts of Ray Tanner.

The start felt like a big-city marathon – I lined up first row in front of thousands of people, with all kind of photographers and news cameras on the scene. Perfect for my oversized ego. I was a little afraid of getting trampled though, and there was a construction bottleneck about a quarter mile in that made a fast start imperative.  I’m sweating like a pig, 84 degrees at race time by the Garmin. After a long wait, there was a gunblast from somewhere way back and we all started in full-on stampede mode.  Being slightly less svelte than the high school kids and singlet wearers around me, I had to pull a few third down short yardage fullback up-the-middle moves to get ahead. When they see a giant pale bus coming through, the skinny people get out of the way.  Once we take the first turn onto Blossom, I’m a little confused. Tigs, who had rode my butt at the Dry Run and cursed me for taking her out too fast, was pretty far ahead of me barely a half mile in. Marian Nanney was even in front of her. And I am not going out for a jog either – it feels like I’m taking it pretty hard out of the gates. My ego is bruised but I try to focus on myself – it’s feeling pretty rough in the heat and I know the finish is a  pretty tough climb. Tigs and Marian have put even more distance on me once we clear the Blossom St railroad overpass, which is the first kick to the chest on this course.

I hit mile 1 just as we start the trek across the Blossom St bridge. I swear my garmin spit out a 7 something split but I must have been delirious. Recheck of the data says 6:12, which feels about right. Micah Simonsen, a previous 35-39 age group rival, comes up and briefly passes me, throwing out some trash talk. Damn him for taking me by 2 seconds on the quarry crusher. Between him passing me and Tigs/Marian way ahead, I am at a loss. Oh well, I am going at it pretty hard so I can’t go much faster without completely bonking. A nasty little incline after the bridge lets me re-pass Micah though, and I’m suddenly making up all the ground against Tigs in a hurry. I catch Tigs right at the turn to Alexander drive and we mercifully get a little downhill after the long, slow incline of Knox Abbott (Blossom turns into Knox Abbott in Cayce). I pass one of my coworkers, Naoma, on the next turn, who is cheering like I’m winning the Boston Marathon, so that was a nice boost. Alexander dr is pretty flat the rest of the way to Gervais so I was able to catch my breath a little.  Mile 2 in 6:31. I pass a couple of more young punks who aren’t too happy about getting master Sasquatched. Finally we turn on to Gervais towards home. I knew Gervais was uphill but it looks like a damn mountain from the bridge. The Ray Tanner course lets you off right after the bridge, but this one makes you climb all the way into the Vista. I conveniently forgot about the rise before Huger too. Wow, this was going to be a whole world of suck. And it was. The 80 degree heat started making its presence felt in a major way, and the incline was basically unrelenting. I was able to catch Marian finally near Huger, and I was trying to kick it in with about a half mile to go. Yeah.. not so much. I was all by myself, arms pumping, begging for that finish turn that seemed to never get there.  Even being cheered by hot drunken USC girls wasn’t helping – I was too distracted breathing (and probably looking) like a wounded elephant. Finally, I make the last turn on Lincoln and damned if it hasn’t already has flipped over to 20 minutes. I try to make my form a little less headless chicken for the pics but the heat and wind suckage is like a kick to the face. I flop across in 20:31.

Garmin gave me  ugly 6:12/6:31/6:46 splits  with a 6:06 0.17 mile kick. Probably a mix of going out too hard and then having to run my semi-bonk up a mountain. Totally shocked when I get to the results tent though – 6th overall and 1st masters. It turns out Eric ran so fast (18:23) he got 3rd overall and bumped me up to the masters “win”.  To add insult to injury, he got a small medal while I got a big ass plaque. Sometimes it pays to be slow.

This race had a really nice post-race set up with a band, food (burgers and dogs) and drinks. Sadly, no beer. A kid I’ve never seen race before (20 year old John Kaminski) took home the win in 18:00, followed by David Adams, a firefighter from Bluffton who ran in full fire gear. Insane. My Google stalking him showed me the reason – he holds the high school state cross country record with like a 14:37 in 1999. Eric’s 18:23 for third is really impressive, especially considering the course and conditions.

In the women’s overall, Marian held on for the win in 20:54 and Tigs got second in 21:11. I would love to see the garmin splits on their first mile – had to be under 6. Darby Graham got 21:39 for third. Amanda Cusaac won female masters – I’ve never seen her race either- her 21:57 was very strong.