The Gov Cup is the granddaddy of Columbia road races, first put on in 1973 with about 300 runners, then progressing to the big event it is today. It started as a 5 miler and 15 miler, but it’s been an 8k and a half for the past 15 years or so. The Columbia Running Club helped found the race, but later let the Carolina Marathon Association (which also directed the Carolina Marathon 1977-2000) take over. Now the CMA hosts the Gov Cup in the fall and the Women’s Heart and Sole 5 miler in the spring.

This year, new Gov Cup race director Ray Renner and the CMA decided to take the race in a totally new direction and hold it in May, though this left the traditional first -week-of-November race date empty this year. To fill the void, they decided to hold this race, a reiteration of the original 1973 5 miler course.

We held a combined Gov cup 5 miler course preview/Columbia Running Club social last month which exposed the masochistic side of those headband and long tube sock wearing dudes 42 years ago. This thing was pretty brutal. I thought the beginning was going to be pretty flat, but it turns out the course went down Barnwell St, which plunges you down into a chasm and makes you hike right back up to Gervais. And just when you’re getting tired, they threw in Saluda hill at the three mile mark. Damn you, 1970’s guys. Our preview also featured a torrential downpour and lightning for dramatic effect.

Speaking of weather, I woke up on race day and swore I must have taken a Delorean ride at 88 mph back to August. Over 70 degrees and nearly 100 percent humidity..in the early morning…in November. WTF?? I was sweating just walking out to my car.  Code and I carpooled downtown and did a couple of miles with our large Team Utopia South presence. I did Barnwell hill at 10 minute pace and was already sucking wind. This was not going to be fun. 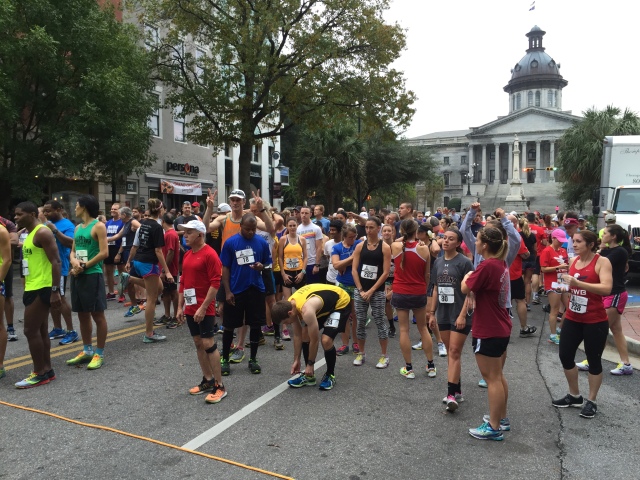 By the time we started lining up to the start, I could tell this was the exact polar opposite of a trophy hunt. Beasts everywhere. While Brandenburg was cruising to a 19:47 win at the Spring Valley 5 and 5, I was going to have to compete against the best runners in the state. Eric Ashton, Jud Brooker, Matt Shock,  Ricky Flynn, Justin Bishop, Orinthal Striggles -these are all guys used to winning every race they enter. I’d be lucky to crack the top 20. The women’s side was stacked too with Eric Ashton’s team of Sara Powell and Michelle Ziegler. Greenville sent some of their elites down as well. On top of that, 49 year old 1984 Olympian Zola (Budd) Pieterse was on hand. And these we just the ultra elite. Eric Allers was on hand to make sure I didn’t have a prayer of placing in Masters, along with Toby Selix. I figured I would have plenty of company with Sarah Allers, the Code, Randy Hrechko, Winston Holliday, Linn Hall , Geary McAlister and Ivanka Tolan. Team Utopia also fielded Eliere Tolan, Julia Early, Lorikay Keinzle, Chris Fawver, Travis Nichols and Mike Compton. Mary Lohman, Lynn Grimes, Dave Hale, Shawn Chillag, Chip Lupo, Hou Yin Chang, Ellen Rodillo-Fowler, Brigitte Smith, Jesse Smarr, Kimberly Hardin, Neil Derrick were some of the other familiar faces.

After hearing a few words from WIS’ Judi Gatson and legendary Columbia runner/multi-Gov cup champ/CMA head Russ Pate, we were off. With the super fast field, I got sucked in immediately. I drafted behind Zola for awhile to get the 1984 Mary Decker Slaney effect but then realized she was still way faster than me. We made the first turn and I knew we were going too fast. Tigs and Code were already talking about it behind me, but I was getting locked into a pissing match with a surging Ivanka and Linn. I have a tendency to be too conservative in the first mile, so I made a point to stay with them. I knew Barnwell was coming up soon but my melon head ego wouldn’t let me ease off. We finally hit the turn on to Barnwell less than a mile in and the mountain ahead looked like an absolute spirit crusher.  That didnt stop me from flopping down the preceding plunge downhill, passing the mile marker in tandem with Ivanka and Linn at 6:15. 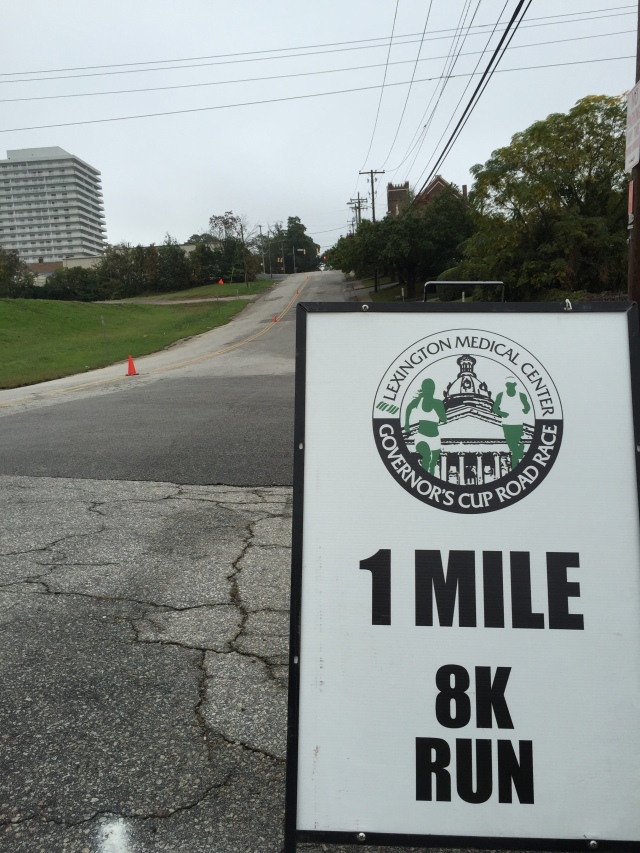 And the first expletive of the day gets uttered. Yeah..that’s my flat 5k pace, not my hilly as @#$ 5 miler pace. I remember bitching and moaning to Ivanka but she didn’t want to hear it. We were getting slammed in the face with Mt. Barnwell. We passed Barnhill Colony student housing  on the left, which I used to bitch about in 1996 walking there to drink beer with my friend Dan. Racing it at sub 7 pace was definitely less pleasant than that. I reached the summit at Gervais and I’m sucking wind like I’m blue shoeing a finish… except the finish is almost 4 miles away. Linn doesn’t seem to care and is just crushing it. Must be nice to be 80 pounds lighter. I’m fighting through a case of the no oxygenzies for the better part of the next quarter mile on Pendleton and finally catch my breath to hit another hill at the Pendleton-Pickens intersection. I forgot about that little treat. By the time I reach the turn onto Sumter I’ve managed to drop Linn and it feels great to find some flat. Sumter and the Horseshoe is my old student home so I try to pick up some good karma from my past. As if the aura of drinking beer and eating wings will make me faster. Mile 2 was about 6:42 with the nasty hill.  Sumter turns downhill past Longstreet past the old Towers site from my freshman year which is now some high end luxury dorms. Not that I’m bitter, not at all. Luckily I’ve picked up a new pack of a girl and a tall teenaged guy (later identified as Gage Bowman and Ashley Sears) that I can actually draft off a little. We fly down the turn on Wheat and we all seem to slow down as we pass the old Blatt PE center. It always sucks to pass the finish line area in a race, but I think we all know that Mt. Saluda awaits. We remain in a mini-pack through Maxcy Gregg park and I’ts hard not to despair of what is coming up. I feel myself losing concentration and then get pissed and tell myself to man up – time to get this thing over with. I jump out of Maxcy Gregg and go alone out into the street. The sizable elite and sub-elite field has left us all for dead long ago, so it feels like I’m suddenly winning the race of mere mortals. Mile 3 in 6:29. Carol Wallace and Ken and Sheila Bolin are at the Saluda corner cheering, so it was nice to get a boost before I attack the monster. And I mean attack, hard. Ken Lowden is marshaling the course on his bike (having newly minted himself an Ironman in Chattanooga a few weeks ago) and starts up the hill with me. Arms are pumping, lungs are burning, but I figure if I can just get to the top in one piece it will literally be all downhill from there. Ken is powering up the hill on the bike and I try hard as hell to keep up. Shockingly I am able to motor up this thing pretty fast –  all the Team Utopia monday workouts must be paying dividends. I manage to keep up with the bike most of the way and exit out onto Heyward St half euphoric from being done and half wanting to donate a lung or my breakfast to the street.

I fly down Heyward as fast as I can go, fittingly in the same area we do the TUS warmup. I’m still deathly afraid of a Code or Tigs appearance but its gotten very quiet, so I’m hoping the Saluda blast has earned me some distance. Rounding the turn on Pickens onto Enoree I can actually make out Toby in the distance. Wow, must be doing well. Mile 4 with Saluda was 6:42. With flat Enoree and a downhill to Wheat to go, I ramp it up to blue shoe kick mode. The heat/humidity are really making themselves known by now, but its time to empty the tank. They let a car in behind me so I know I’ve got a good gap on my pack. I’m absolutely flailing down the hill that parallels Saluda and almost trip over myself flopping onto Wheat. With the red numbers in sight I go into overdrive. No one to catch, but I see low 32 and sprint it out to get under 32:30, 32:28, 6:08 last mile, 6:30 overall. I make sweet love to the asphalt for awhile but I’m pretty excited about the time. This is a good minute faster than my Race to Read 5 miler a month ago, which was colder and probably about the same hill-wise.  I ended up 4th master and 2nd in the 40-44, so pretty thrilled about getting some bling in such an uber-competitive race. Nice woodcarvings for awards too – very sweet.

In the age groups, Gage Bowman took 1st in the 2-14. Travis Nichols won the 25-29 with Kortni Miller 3rd among the women. Matt Shock and Justin Bishop went 1-2 in the fastest 30-34 ever. Michele Ziegler and Ashley Sears made for a pretty fast women’s 30-34 too. Striggles took the 35-39 by only ten minutes. Toby Selix won the 40-44 followed by the Albino Sasquatch and the Code. Ivanka had a rough Saluda hill but still got 1st in the women’s 40-44. Randy Hrechko and Winston Holliday went 1-2 in the 45-49, while Julia Early showed a blue shoes style kick to win in the women’s division. Chantal Faure won the 50-54 with Francisco Mora and Phil Togneri going 2-3 in the 50-54 men. Lorikay Keinzle took the 55-59. Mike Compton and Neil Derrick went 1-2 in the 60-64, with Lynn Grimes placing 3rd among the women. Brigitte Smith took 2nd in the 65-69, with Shawn Chillag winning the men’s division. Peter Mugglestone took 2nd in the 70-74 while Jesse Smarr won the 75+.