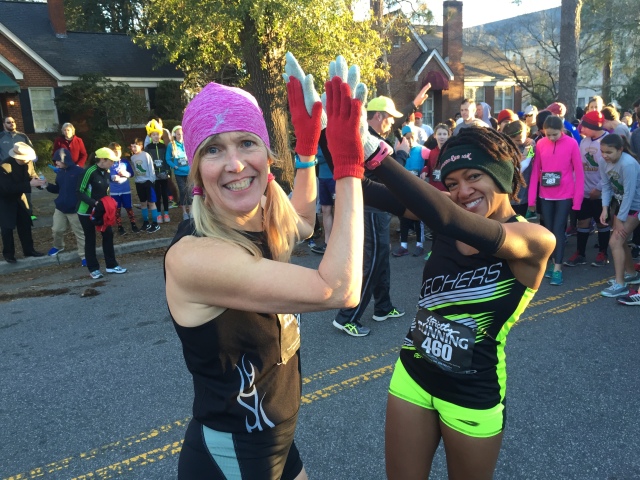 To the racing obsessed, what’s better than a race every Saturday morning? TWO RACES – the double dip. This kind of racing is not for the faint of heart, but if you have a dark, twisted, maniacal competitive streak (What, me?) then I highly recommend it.

There’s a whole science to the double dip, much like my primary area of study, the trophy hunt. Double dipping is actually kind of cheating at the trophy hunt, since you don’t have to hedge your bets on one or the other. My double dip hints –  Start times need to be at least an hour apart, and usually (unless you are an advanced level freak such as myself) the first race has to be a 5k. Try to pick up your 2nd race packet ahead of time if you can, and make sure your parking spot for race one makes for an easy getaway.

Pretty easy right? Oh, and some say to back off your effort on the races, especially the first, but that is not humanly possible for me. Once the bib is pinned, its on like Donkey Kong.

Race number one on this double dip was Run with the Saints, a new 5k put on by local elite MC Cox to benefit St Joseph’s School. Having a runner as a race director is key, since you can usually bet it will be well done. Plus, this race is one of the many PR friendly flat Shandon rectangles, so definitely a good one for fast times. It is almost identical to Race for the Place next month, except the course is done in reverse.

I made sure to get here early and position my car in a getaway position headed towards the highway. But really, with races two hours apart, I’d have more than enough time to get to Dutch Fork, even with it being on the other side of town.

Race temps were mid 30’s and damn cold despite the forecasted 60 degree day. This place was absolutely crawling with beasts. I think MC called upon all her running friends and set up a Cold Winter’s Day level of competition for this first time event. Lots of 621 Ninjas, Strictly Running team peeps and even Larry’s A team group. It was looking like I’d be struggling to find the top 20. Adam Feigh, Jonathan Kinsey and Rashad Striggles looked to make for an interesting elite showdown for the overall.  Shawanna and Erin Miller would be clear favorites to fight it out for the women’s crown. I was there only 5 minutes and the 70+ AG was already filled out with Arnold Floyd, Henry Holt, Peter Mugglestone and Rocky Soderberg. Ted Hewitt was making his comeback after a long time away from racing. Luke Godwin, Larry Jourdain, Brad Marlow, John Gasque, Melinda Petruzzi, Linn Hall, Mike Compton, Brittany Robbins (with coach Bishop pacing), Drew Williams and Tracy Tisdale-Williams, Sarah and Eric Allers, John Charlton, Robbie “OG” McLendon, Pete O’Boyle, Erin Suttman and John Bradley were just a few of the familiar faces in this brutally competitive field. 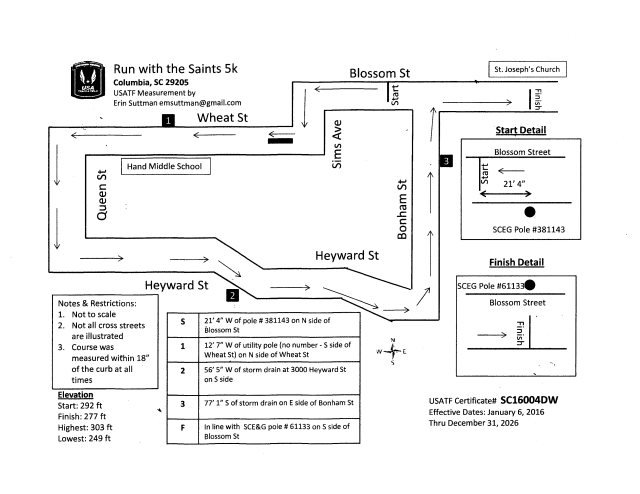 The start was a little chaotic since all the kids from the school were lined up on the front row. At least most of them sprinted out, but when they crashed and burned a quarter mile in, I had to do a little Heisman stiff arm on one kid’s shoulder so he wouldn’t get run over by an Albino bus. I’m no elite by any means, but I’m used to a pretty thin crowd around me. I was a total mid packer at this thing though. I couldn’t believe how many people were just throughly, and completely, kicking my ass. The upside to the huge pack was having plenty of pacers. Tigs went out super fast, and it took me most of a mile to pull even with her. I was waiting for some British curse words thrown my way but she was just grumbling about me smiling at her or something. I actually was feeling pretty good – I had several 40 mile weeks put in, so I’m getting my endurance back, despite virtually nil speedwork (outside of races). First mile in 6:18, so about what I had planned. By the time we hit Queen I was starting to hurt some but it was a psychological boost to know we were at least not headed further away from the finish. I saw Luke up ahead and managed to pull even with him, but then he surged ahead. I hadn’t seen Luke race since last year’s Race for the Place, where he crushed me and went sub 19, so I had no idea what his current fitness was. After the turn towards home on Heyward, I managed to finally pass Luke, though I think he was drafting off me for quite a while.  Everyone, and I mean everyone, can draft off my sizable wake. Heyward is the common street for like 10 shandon races, so I know it like the back of my hand. It’s definitely got some roll to it, and I was starting to die on the inclines. Although there were plenty of people ahead, I had managed to break free from everybody, which is a major motivation killer for me. I need a carrot on a string. Luckily I recognized a carrot up ahead in the form of Drew Williams, who I knew was injured and starting to fade just a touch. Mile 2 went off with my new buzz/alarm Garmin 630 but I was too afraid to look – I knew it had to be slower (actually only 6:21 by check after the race). I really wanted my sub 20’s back after a long injury/comeback cycle dating back to October. I decided to push the chips on the table and go all in. The next mile was basically pure torture. I was trying to maintain my form though my lungs and heart were having an MMA cage match against my chest wall. Every now and then the very small rational voice in my head mentioned I might want to save some for the next race later, but the larger, insane voice said to go even harder. I could tell Drew was hurting by the time we hit Bonham, and I finally caught him there. I think he gave me some words of encouragement but I was too busy fighting back death to answer. Just after the pass I spotted another guy with some gray flecks in his hair, who actually looked around to see what stampeding elephant was heading this way. I saw his face and instantly thought – AGE GROUPER. I ramped up the speed even more and entered some dark areas of the pain cave I hadn’t seen in awhile. I saw J-Lybrand volunteering up ahead and I knew it was the final turn. I blasted around the turn with the clock in the 19:20’s and sprinted like a crazed banshee to hit the line in 19:29.  Did one of my long pavement makeout sessions, but in a happy way. First sub 20 in months and way under what I had hoped. I actually managed a technical first in age group, though newly 40 Striggles obviously beat me (3rd overall), and five other guys over age 45 also took me down. 14th overall, 7th masters. Jeezus H this was a tough field.

Way up in front, Jonathan Kinsey fought off Red Shoe Run 10k champ Adam Feigh by 10 seconds 16:20 to 16:30. Not too shabby. Striggles got third in 17:08. The women’s race was very high quality with 4 women under 19 minutes. Shawanna edged Erin Miller, while Erin Suttman beat Heather Costello for third.  Erin must be training hard, as this was well over a minute faster than her time at MLK. John Charlton and Eric Allers also threw down in an epic battle for male masters, with John taking the win 17:34 to 17:56. Linn Hall had a close race with Sarah Allers to take female masters .

Age group honor roll: Brittany Robbins ran 24:29 to take 2nd in the 15-19, paced by Justin. Ashley Sears and Deirdre Maldonado placed 1st and 3rd in the 30-34. Ryan Sacko won among the men. Drew Williams and Luke Godwin took the top two 35-39 spots, while Heather Costello won among the women. Sure enough the 2nd place in my age group was the guy who turned around – Ryan Krietsch. Great, yet another unknown beast in my age group. Eric Allers won the 45-49 ahead of Bob Daley. Tracy Tisdale-Williams took 3rd in the female division. Larry Jourdain and Brad Marlow were champs of the blazing fast 50-54 men. Lisa King took 2nd among the women. Sarah Allers and Melinda Petruzzi won the 55-59 women, while Geary McAlister, John Bradley (amidst a 20 mile training run) and Tommy Kahaly swept the 55-59 men. Robbie McLendon, Peter O’Boyle and Mike Compton took the 60-64 division at 22 minutes and under. Brigitte Smith won the 65-69 women. Arnold Floyd, Peter Mugglestone and Henry Holt won the 70+, all under 30 minutes.

After an awesome selfie with the Cardinal Newman cardinal mascot, I took off for Dutch Fork…(to be continued) 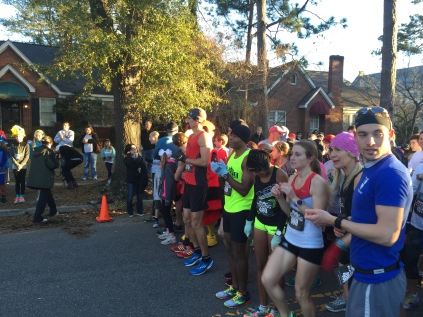 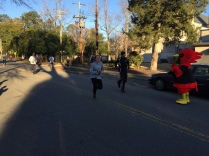 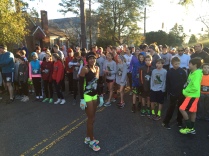 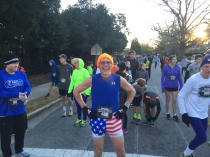 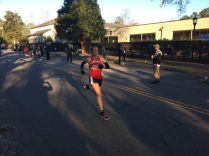 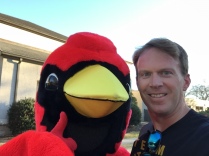 One comment on “Run with the Saints 5k and Dutch Fork Be a Fan 5k double dip, Part 1”