The Sleigh Bell Trot is a 5k at Saluda Shoals Park that serves to kick off their “Holiday Light at the River” Christmas lights event. I don’t know exactly how long the race has been in existence, but at least since 2009, my first year doing it. The race has exploded in popularity since then, which has been great for the park, but has created some growing pains. Throw 700+ people into a confined space in the dark, and there will probably be problems. Fortunately, they have now divided up the “stroll” (all walkers) and the “trot” (timed 5k) into separate nights, which was huge for alleviating congestion. Start time has traditionally been 7:00 on the Tuesday before Thanksgiving. This year promised to be even better , with a new, less curvy course making use of the new entrance and 1.5 miles of paved trail.

With cub scout camping cramping my trophy hunting plans over last weekend, I almost forgot about this race, which I had signed up for weeks ago. I’ve never run particularly fast times at Sleigh Bell, largely a product of having to maneuver my less than agile frame over all the cul-de-sacs and turns of the park . Despite the huge crowds, this race actually is a bit of a trophy hunt in disguise. Very bottom heavy, virtually no elites. The only bummer is its been a popular race for Irmo/Dutch Fork cross country kids, stealing my precious overall Tour de Columbia points.

Did someone say kids? I was feeling all lazy on Tuesday afternoon, thinking of phoning it in for some age group/masters points, when all of a sudden I remember Joyce’s warning from the Lexington 5k. Ten year old Connor Forche was out to seek his revenge at this race. I go from the pleasant excitement of a cool holiday event to the gut wrenching anxiety of getting a beatdown from a fifth grader. Sure enough, I later received these screencaps from the puppetmaster herself: 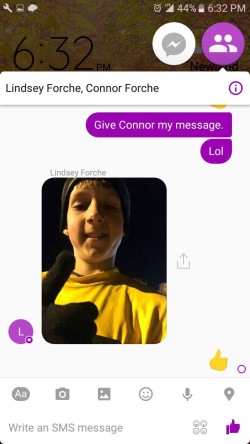 Luckily by this time I had already managed to show up over 2 hours early and run the entire point-to-point course forwards and back. Why? Because I my running nerdery knows no bounds. This was going to be way nicer than years past. Mostly flat, except for a decent hill a half mile in near the red dirt monster from Climb the Clay. Basically 1.5 miles into the park before doing a lap of the interior loop, except for one little cul-de-sac from the old course. Much faster than the former route for sure.

One downside of doing all this was being ready and super warmed up ONE HOUR before race time.  I managed to then get majorly chilled and ended up retreating to my heated car for most of my pre-race prep, essentially wasting all that warm-up. I did jump out of the car about 20 minutes out and do a bunch of strides to stop shivering. It was difficult to see my competition in the darkness. I didn’t see any obvious 40-somethings but Zach Demoya,  Wilson Harvey, Parker Roof and a slew of other XC kids were sure to keep me from having any holy grail ideas. It was cool to see longtime CRC member Birgit Spann with husband Holger back in the States on vacation. They’ve been in Germany for the last 2 years. Pete Poore, Roy Shelley, Devon Shirley, Leeds Barroll, Shelley Hinson, Jim Selbee, and Rocky Soderberg were on hand. Joyce’s Team Utopia Youth were out in force, including Connor, raising the fear of at least one of them giving me a beat down.As Joyce would say, I was skeered.

The gun goes off and I notice one thing right away. The high powered headlamp I always bring to this race sure works a lot better on my head, AND NOT ON THE PASSENGER SEAT OF MY CAR  where it happens to be at that moment. Nice job, hero. There are a fair amount of Christmas lights out there, but it is still pretty dark. Fortunately I know the 1.5 mile entrance road is all smooth with no speed bumps. Time to go not so gently into that good night.  I usually like to lay off the first mile, but if I’ve got a pack of grade schoolers gunning for me, I’d better go get it. Having done a couple hundred 5ks in the last 7 years, I’ve basically come to the conclusion that the best strategy is just to really suffer as long as you can stand it. I spend the whole first mile like some evil nursery rhyme villain, chasing children through the dark forest. None of them are Forche, but plenty of coach Joyce’s black and gold minions. The hill a half mile in helps spread out the field some and gives me a little room, the top at 0.75 and the mile at the bottom on the other side, 6:15.

This is pretty much perfect pace for me, and I feel surprisingly good. My goal is to hold this through the 2 mile and see what the blue shoes can get me. Finally, I see a familiar small shadow in the slight rise before entering the interior loop of the park. I do a quick check as I pass him, and I’m pretty sure its Connor. He looked up as I slid by with all the finesse of a stampeding elephant, so I know he’s locked in to the Sasquatch. A few meters ahead I also catch whom I think is his dad, so now I’ve got the whole freakishly fast clan chasing me down. Blasting into the interior loop, the suffering has kicked up a notch, but I’m holding steady. I hear what I think is the cul-de-sac with the 2 mile mark (which was playing loud music and disco lights when I did my warmup) and I surge towards it, but it’s actually some other display. Damn. Finally I see the cul-de-sac 2 mile marker, with Parker Roof and some other kid leading the way out. I’m pretty gassed, so I don’t even bother to check the Garmin. Time to throw down. I round the turn and head back out onto the loop, which is very familiar to me from years of doing the old route. It’s darker with the lights more spread out, but I make out the old registration shed and finally a downhill area with blue icicles. I mentally check my run nerd notes and remember blue icicles=blue shoe, a half mile to the finish. I’m already blasting away at 1000 percent effort, but hey, let’s ramp it up a notch anyway .Painfully, there’s a slight hill as you round the old entrance and head past the admission booth. By this point, I can see the finish in the adjacent parking lot when I catch some cross country kid. He does not like being Sasquatched. Not at all. He starts sprinting it out and we are riding shoulder to shoulder in the parking lot. Sadly, the 25 more years and 40 plus pounds must deal with reality as he pulls away near the last turn. I swing around the bend and I’m momentarily pissed when I see the red seconds in the 50’s. All this work for a 20 minute 5k??? Just as I start raging I notice the big 1-8. OMG.  I launch into full headless chicken, but painfully I am just a few seconds late, crossing in 19:03.  My first fear is a short course, but I get a 3.09 on the Garmin and I know the course is certified. Bam. I’ll take it. My fastest 5k in over a year and almost a return trip to the 18’s. 1st masters, 8th overall, 1st in the 40-44 and 2nd among those who can legally buy a beer. Apparently my key to speed is the fear of getting fifth gradered.

In the overall, Zach Demoya took the win in 18:23, with Wilson Harvey running 18:31 for 2nd. Wilson finished behind me at Springdale in August, so whatever he’s doing the past 3 months-it’s working. Seth Kurtz was 3rd. Devon Shirley showed up the kids in the women’s race, taking the win over teenagers Daria Yoder and Ashley Golbus. 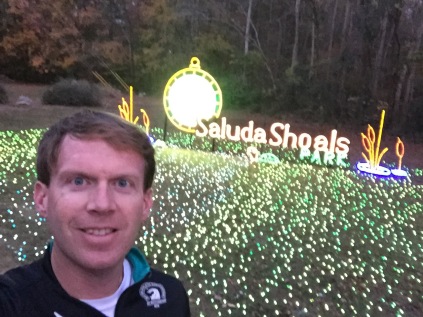 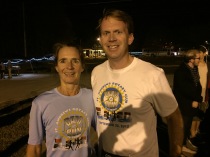