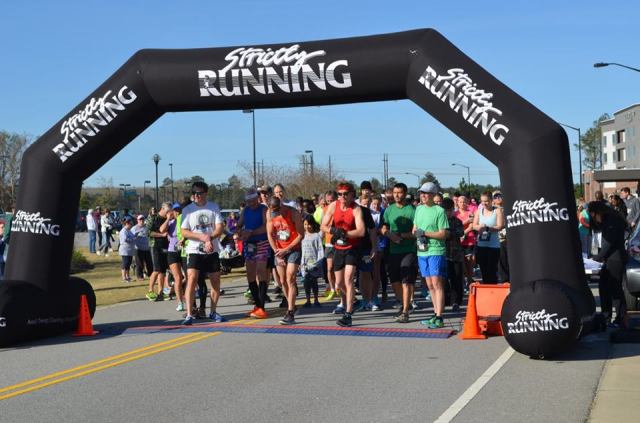 This week posed a difficult choice between two races that have been around awhile, both having been regular stops on the nascent Tour de Blue Shoes 2009-2012. I had hoped they would be double dippable, but sadly the Healthy Capital was at 8:30 and March for Meals at 9:00. As fast as I think I am, there’s no way I could get from Columbia High to Timmerman Trail in ten minutes, even when factoring in my advanced level Grand Theft Auto driving skills. While Healthy Cap was my first second overall ( a crushing defeat to a then-unknown Mike Hedgecock), MFM is the race that started the obsession.

Rewind to 2009, all of five races under my slightly larger belt. MFM was then held at Riverbanks Zoo. Being the parent of a 6, 4 and 1 year old at the time, I was well acquainted with the zoo and what I thought was its gloriously flat terrain. I came into that race hungry for a PR and hopeful of breaking the 23 minute barrier. I didn’t know a soul in the running community at the time so I was glad one of my coworkers (Michael Ferlauto) agreed to come with me to race. With that race, I charged out from the start knowing I could coast on flat ground if I started to bonk at the end. I was pretty winded when I hit that first mile, when someone said WATCH OUT FOR YOUR FOOTING ON THE HILL. Uh…what hill??? Suddenly we were directed across the river on a bridge and then up the face of what can only be termed a mountain (later the infamous Mt Riverbanks). I died a thousand deaths up that thing and about wiped out flopping down. I eventually crashed across the finish line in 23:27  and tasted asphalt for at least 5 minutes. Exhausted, we left the race as soon as we were done. A few hours later, I looked up my result and was blown away. Inexplicably I had won the 30-34 age group. Driving down to Senior Resources (the race sponsor) the next day I picked up a shiny golden running man trophy. Like my first hit of some very good drug, I was hooked instantly. And the rest was history… 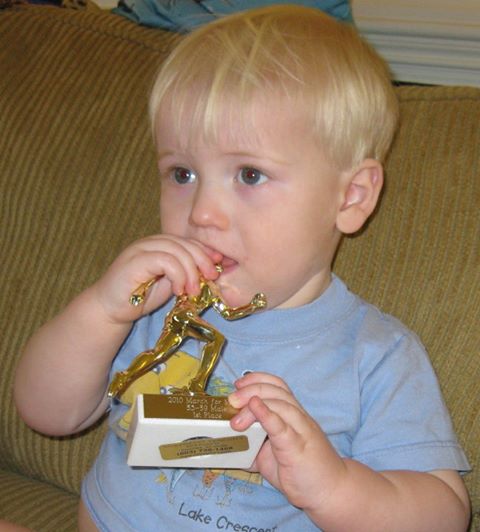 There’s been more drama along the way. In 2012 the race was postponed by an early morning tornado. In 2013 it was the first step of the historic triple dip which was almost waylaid by a stalled train blocking our entrance into the zoo. I think it was 2014 where Ken Vowles gave me an epic beat down in race one of his double destruction of yours truly (got crushed at Race Judicata an hour later). By 2015 the race had moved to Timmerman trail, where I again got double whupped by Brandenburg, first at Race for the Place then MFM. 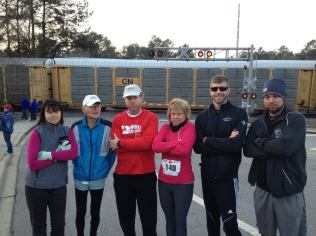 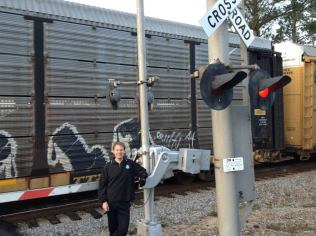 I missed the race in 2015, but I was eager to race what was a new revised course, this time actually on fresh legs. I made sure to avoid the Friday MUV fitness squats which had derailed me at the Lagniappe 5k two weeks earlier.

With two actual rest days in a row, I felt pretty good rolling into the tennis center out in Cayce for the race. I thought Code might show up, but he was not to be found. No other 40-44 age groupers seemed to be around, though I quickly found out Brandenburg and Coach B were on hand to make a masters win highly unlikely. My only solace was that Mark was coming off an injury and JB had been furiously trying to get back his bike fitness after being a full time runner in prep for January’s Charleston Marathon. Wilson Harvey, Rocky Soderberg, Peter Mugglestone, Kimberly Hardin, Dina Mauldin, the OG Robbie McLendon, Jim Williams, JB’s better half Barb, Sue and Lee Porter were some of the CRC familiar faces at the start.

With the gun, I jump out to the front like a maniac and start to go straight, thinking of the old course. I get quickly redirected by some cones and we veer off to the left for a very long straightaway on the road outside the Timmerman Trail area. Wilson takes his rightful place in the front and I latch on to the back of the masters beast pack of JB and Coach B. There’s another fit looking younger dude and some kid with beats headphones keeping pace nearby. As we close in on the turn into the forest, the kid starts actually jostling up against me and cutting me off, then spits over his shoulder just missing me. It takes every ounce of restraint not to toss this little guy into the ground, so I make sure he gets an earful of F bombs loud enough to blast through his oversized headphones. I guess that was enough to get him jump started because he pulled ahead after that. After Wilson and the beats brat, JB enters the forest first, with me and B conga lining behind him. First mile was about 6:12. Mile 2 is all Timmerman trail, a winding paved route with a few bridges, all pretty flat. JB surges and I latch on to him like an oversized circus monkey. He maintains a pretty hard pace, and throws in a few more surges. It’s killing me but I manage to keep up. A few times he appears to slow just a bit, but as soon as the elephant tries to stampede past him, he closes the seam and pulls ahead again. We hit the mile 2 marker, but the Garmin is all wonky out in the sticks and with all the turns.  I don’t get a mile 2 split until forever after the mark and its like 6:53. No way we are going that slow.

By this time, I sense Mark has faded behind me, but its difficult to really notice anything when you are going full out and an inch from JB’s head. At this point I drop the pass plan and push in all my chips on Plan B: wait until the final stretch. JB may have just a touch less body fat than me, but he’s a fairly effective wind blocker, and if he’s dead set on being in front, then I guess I’ll take the draft. Mile 2 seems to drag on forever. I keep seeing faux finishes, but its just a break in the trees each time. We can see the kid up ahead and he just keeps winding through the forest. I’m sucking a fair amount of wind by now, but chasing someone is at least a distraction from all the respiratory distress. Finally, finally, we hit the wide open area with the finish maybe a quarter mile away. JB starts to mount a kick but this is what I’ve been waiting for. I may not be built for distance, but I’ll take just about anybody against me for 400 meters. Out comes the headless chicken. I give JB about a 3 foot berth to make sure he doesn’t C-Block the Blue Shoeing about to commence. JB tells me he doesn’t have anything left, but I don’t trust him. I flail to the finish at sub 5 pace like my life depends on it, crashing through the Strictly Running arch in 19:18. 3rd overall, first master and AG.  Any victory over JB and Coach B is extremely rare, even with them off their training, so I will most definitely take it. Garmin has 2.99, so I’m not sure about the course. I don’t know if its certified. They had unique spoon medals for awards so that was pretty cool.

In the overall, Wilson Harvey took the win in 18:39 with my “little friend” second in 19:09. Would have really liked to have found those 9 seconds. First female was 13 year old Lexie Vandervelde, with Kimberly Hardin 2nd and Barb Brandenburg 3rd.

Age group honor roll: The guy in our pack in the first mile was Colby Hanson, taking 1st in the 25-29 in 20:54. CRCer Kathryn Livingston won the 35-39. JB and Mark competed in the most brutal 50-54 group ever and of course took the top 2 slots. Third place Kenneth Bohan in 21:16 was no slouch either. Jim Williams won the 55-59 by almost 5 minutes. Robbie Mclendon easily won the 60-64 as well. Sue Porter took the women’s 60-64. Peter Mugglestone and Rocky Soderberg took top honors in the 70+. 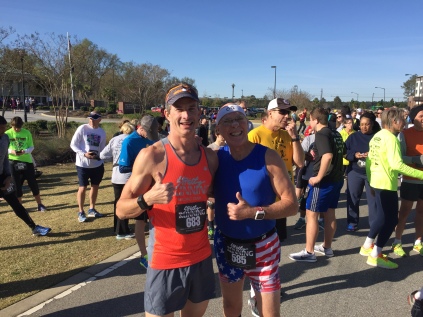 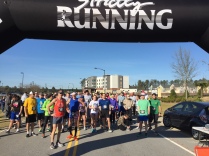 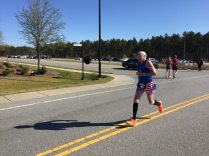