The Move for the Music 5k is a new event this year put on by White Knoll High School to benefit their music program. To be honest, I had forgotten about this one. I was content after last week’s Sweat it Out to have a few weeks off from racing, maybe enjoy my Saturday and not wake up super early for the privilege of serial portapotty destructions and torturing myself for almost 20 minutes. But then I realized there was this race on the Tour schedule, and if there’s an opportunity for a golden trinket to be had, my mind will not rest unless I get my hands on the precious.

I went into this race a little skeptical of what I would get. It had apparently been cancelled and rescheduled twice since fall of last year. The course looked like a simple out and back but wasn’t certified as far as I could tell. Certainly seemed like a small time, mom and pop style race. And while some avoid these type of events, it sets my trophy hunting sense a-tingling. Some people use their talent and speed to compete, while I rely on scouring race calendars and doing by best to contend against the grandmas and hobby joggers. Sasquatches don’t come by holy grails (the overall win) easily. 2016 proved to be a banner year for holy grailing with 3 under my belt, culminating in the 7-minute win over 27 other runners at the Destiny Johanna 5k. I have zero shame when it comes to the podium.

So the grail was definitely in the back of my mind upon showing up at White Knoll that morning. I mistakenly pulled into the wrong parking lot where they appeared to have the entire Lexington police force out to monitor the race route. I was having flashbacks to my 5-star Grand Theft Auto standoff last night so I made sure to high tail it out of there to the actual lot down the road. Looked like a small turnout but lots of CRCers. Susan and Rich Weaver, Tour director John Gasque, Pete “suns out, guns out” Poore, Henry “I’m twice your age and can still give you a beatdown” Holt, Leeds Barroll, Jennifer Lybrand, Jim Williams, Shelley Hinson, Ron and Helene Lipe, Reese and Bob Petruzzi, Brigitte Smith, Jessalyn Smith, John Houser, Kerry Stubbs and Michael Lambert were some familiar faces. Oh, and lest I forget, Ryan Plexico. After kindly taking last year off and letting me bask in the CRC overall glory, Lightning Plex is back with a vengeance, crushing trophy dreams everywhere. To be fair, though, there looked to be a few high school dudes that could lay a whooping on an aging pale Clydesdale with delusions of grandiosity.

I had a pre-race panic that there were no bathrooms (this has happened before with first time races) but luckily they had a distant school building open for me to turn into a haz mat zone. Plus, the half mile potty jog got my warm up in to boot. Score.

With the start, Plex jumps out to the early lead trailed by a bunch of teenage kids, one of whom I realize is Zander Jeffcoat, the 13-year-old beast who runs 17ish 5ks. Plex was going to have a challenge on his hands. I had taken 2 days off leading up to the race since I had been feeling beat down of late. I thought I’d be fresh but cranking out 5k pace when its almost 80 degrees and humid is never going to be pleasant. Plus, I couldn’t find my Garmin that morning so I was flying completely blind. No idea about pace/distance, and a completely unknown course. Naked and afraid. We start out with a nice long downhill and eventually make our way to a traffic light, where I see Plex and Zander veer off to the right. There was a police car in the middle of the road so I thought maybe they changed the course or I read it wrong. Luckily these guys are way faster than me so as I approach the intersection I see both of them frantically headed back to the main road. Not sure what happened, but I guess they assumed a turn with the car in their path. Fortunately, I see it in time and just head straight. My reward is then an interminable low grade hill that seems to last freaking forever. I keep looking at my bare wrist to see how badly I’m hemorrhaging time, but apparently my Garmin works better on my body than hidden in the toe of my other pair of shoes. It’s probably best I don’t know because I am dying at the top anyway. At least I pass a guy wearing Beats headphones. I can’t lose to a guy wearing those things. How do people run with these things? –  the sheer volume of sasquatch head sweat would render any electronics useless. A brief downhill ensues with the turnaround into the lot at a middle school, and we are headed back. I’m in my typical no-man’s land of 5ks, about 5-10th place and no one around, so it’s nice to see the other runners on this pure out-and-back route. I try to give some encouragement to my fellow CRCers but Mt. White Knoll has largely deprived my brain of oxygen and it’s hard to speak. The mountain, however, is much nicer going down so I try to push the pace a bit. Not really happening, as Mr. Piriformis wants me to know he was not properly stretched this morning. Sorry, dude, the colon is going to beat you every time. Once we hit Plex’s wrong way traffic light I figure about a half mile to the finish. A half mile, as it turns out, that now is almost completely uphill. Any momentum from careening down Mt White Knoll is shot immediately, while my legs decide to settle in to a hot tub of lactic acid. I have hallucinations of Beats trying to Blue Shoe me but I realize it’s just my own oversize feet and shoestrings. Finally, I hit the turn into the parking lot and can make out 19:35 ish on the clock. My boundless ego can’t deal with going over 20, so headless chicken/race face mode goes into full effect. I manage to beat the red numbers by a mere 3 seconds, clocking a 19:57. Whew. Good enough for 5th place and 1st in the 40-44 and masters. Not pretty, but I will take it on this mountainous course. Jim Williams got 3.10 miles on his Garmin, so the uncertified course is probably pretty close to legit. Hopefully, they will make it official next year.

In a race that went down to the last stretch, Zander Jeffcoat bested the Plex by 6 seconds, 18:09 to 18:15. White Knoll’s Nathaniel Wilburn took 3rd in 18:58. Turns out I didn’t get my Holy Grail, but CRC’er Shelley Hinson notched her first overall win, with a 24:05. Congrats, Shelley! Jen Lybrand took 2nd with Wilson in tow, while Nicole Rybar was 3rd. 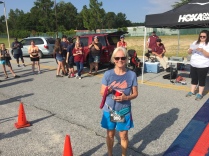