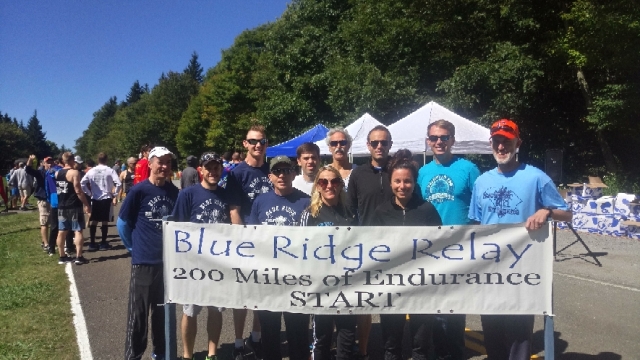 I’m pretty sure I swore off this race back in 2012, the last year I ran it. As anyone will tell you, I am a hardcore relay addict. I get jacked up every spring for the Palmetto 200 like its the damn Super Bowl, eight years running. But the Blue Ridge Relay (BRR) is a whole other animal. You think you’re tired doing that flat run at 4 am down in the Lowcountry? Try doing it in the cold, up a freaking 8-10% grade mountain for a couple of miles, against a bunch of studs with zero percent body fat tracking you down.

Read: the BRR is brutal. They start you off with some tough climbs, but lure you into the false sense that this is not so bad. They save the worst for the last few legs when you’re dead tired and can’t believe that roads this steep actually exist. They give you topographic maps of the elevation changes in each leg, and even rate the legs from easy all the way to MOUNTAIN GOAT HARD. Believe me, they are not kidding.

My first foray into the BRR was in 2011 with my Palmetto 200 team, Van on the Run.  I did everything wrong. We camped the night before and I got very little sleep thanks to the cold and possible mountain lion roars. My coworker that I recruited bailed at the last minute, which gave me 4 legs and over 20 miles. I ran the first careening downhill leg at 6 flat pace and pulverized my quads into hamburger. I ran off course down a very dark and isolated driveway, fearing gun shots all the way back. I had a cheap headlamp that gave me a 5 foot window of vision into the pitch black. I ran out of food. My last leg featured a bonk so epic it registered on the Richter scale, and I almost passed out on a mountain side. Good times.  Apparently I’m a masochist at heart because I did it again in 2012 with the 621 ninja team. I learned from the previous encounter, though the heat that year sucked, we got our van stuck not once but twice, once requiring a tow truck. Not to mention my shirtless reflective vest mansierre run on the parkway and getting ruthlessly chicked and grandmastered on the final leg into Asheville. 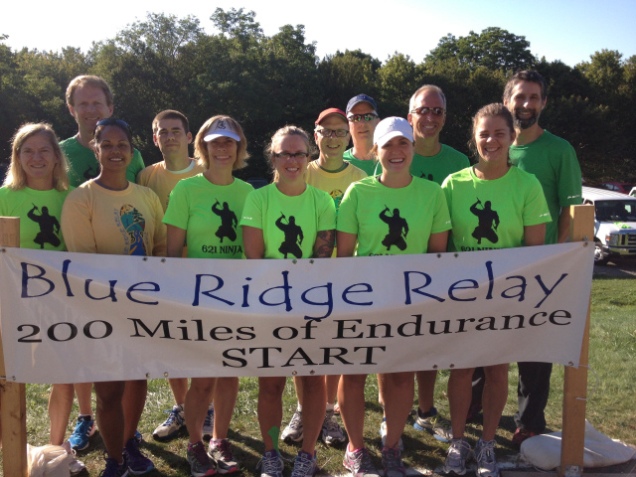 Did I say grandmastered? The 50 something in question that whipped my tail was the Rock Hill Striders’ Jay Abraham, the only person to have done the BRR since its inaugural year in 2003. I guess its only fitting that Geary McAlister, another grandmaster beast, recruited me over to Jay’ s team for 2017, making me an honorary Rock Hill Strider for a day. If you can’t beat ’em, join ’em, I guess. In addition to myself, Jay and Geary were able to sway Van on the Run alumni Dan Carter, Rob Gannett, Julie Yelk and of course Darrell “the Code” Brown. As it turned out, this team was kind of cursed from the start. We had people drop out, come back in, and Jay scrambled to put out leg assignments each time. Finally we had a good set up and 12 healthy members by the week of the relay. Of course, then hurricane Irma decided to pay an unwelcome visit at the last second, and one of the Striders now living in Orlando couldn’t make it. We were at 11 once again less than 48 hours out. Sure enough, the last iteration of the leg assignments featured lucky 4th leg recipients Geary McAlister, Dan Carter and THIS GUY. Damn, this was going to suck, again.

While most of the Rock Hill crew sensibly left on Thursday night and stayed near the start, the Columbia contingent decided to leave at the crack of dark thirty on Friday morning. Because, why not double your sleepless nights, right? Between a wreck and tons of Florida evacuees, we got stuck in traffic and showed up less than an hour before our start time of 11 am. We finally got a brief moment to meet our Van 2 teammates Jay, Dan W, Kim, Jeff and Dave (Rob was also joining their van) just before our start, but we were finally there after 50 emails, a ton of injuries and a roulette wheel of leg assignments.

Geary was first up for our van, and he got a chance to run my Leg 1 from 2011. The crazy fast four mile freefall. I was hopeful that Geary might set a tone for low expectations (I distinctly remember texting my 4 leg plan to be “slow AF” for this years relay), but unfortunately he had to smoke a lot of kids on the way down the mountain in low 6 pace and show these guys how 60 is done. Dan struck out on his first leg like a man on a mission, so I was like damn I’m going to have to actually try.  My first leg was number 3, labeled as “moderate” in difficulty. This meant there was actually a bit of flat before a nice mile long jaunt up an 8 percent grade gravel road. At least the last 3 miles (5.2 total) were downhill. I took off like a champ, since the weather was nice and cool and I was a ball of nervous energy. A ball that apparently forgot to tie his shoelace. Nice job, cool guy. I stop almost a mile in to tie it and there’s already some dude tracking my ass down. Really?? Alright, he’s going to get smoked on this brutal hill. Yeah, I don’t even make it to the mountain before this guy gives me the beatdown and tells me “good job”. Oh the shame. I can count on one hand the number of guys passing me in the P200 in 8 years and I’ve lasted all of 7 minutes out here. I hit mile 1 around my net projected pace of 7:10-7:20. I figured I had 22 miles scheduled so I might as well stick to my Kiawah marathon BQ pace. It turns out Kiawah doesn’t have 8% grade mountains. I blast away at the relentless incline for the whole mile and get all of 8:30 in return. Flopping over the top is like pure heaven though, because I know its all downhill from there. I ramp up the pace back to 7 minutes flat and I’m generally feeling pretty good until dammit, here come footsteps again. Sure enough, some singlet wearing kid from “THE LEATHER PRESIDENTS” team blasts right by me like I’m standing still. My sasquatch ass registers a 6:58 mile and this guy whips by like I’m a soccer mom out for a sweatpants stroll. Double shamed already. I just bury my pride though, because killing yourself in leg 1 is a recipe for disaster. I rumble in to the exchange zone, averaging about 7:23 for the leg, and handoff to the Code.

Code and then Julie rock out two legs with crazy climbs at the end, with Julie having to navigate the town of West Jefferson. We meet back up with Van 2 at our van flip site just outside the town limits. Apparently our meet and greet  with the Striders wasn’t quite long enough because Jay and Julie don’t recognize each other at the zone. After a brief moment of utter confusion, the handoff was executed and Van 2 was off for a few hours. 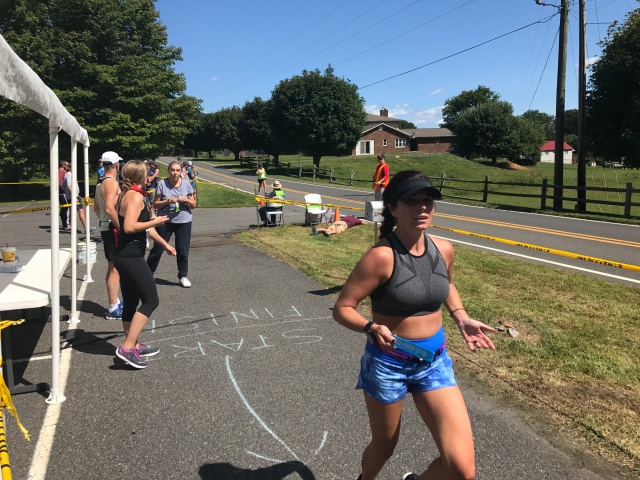