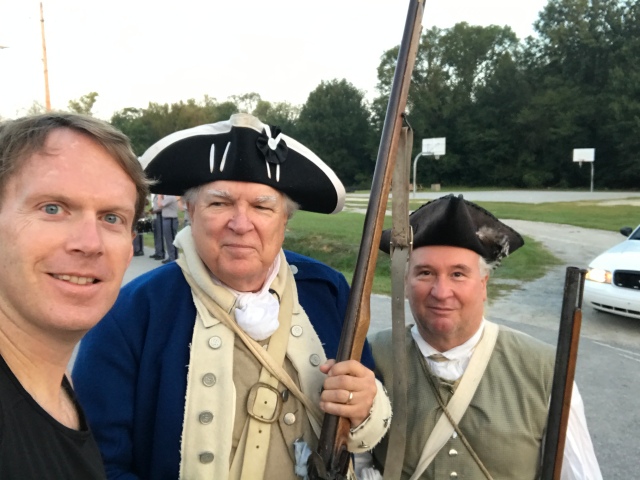 So I’m definitely a short track kind of racer. I’ll take 20 (or hopefully less) minutes of lung busting frenzy in a 5k any day over a long slog like the marathon. That being said, I do have a special place in my heart for the half. It’s long enough to make it a challenge, knowing you can’t go all out, but short enough to race without feeling like the rest of the weekend is toast. Racing a half is tough but always feels infinitely better than the torture I put myself through in the shorter distances.

My goal race is usually just whatever is next weekend, but since I signed up for the Kiawah Half Marathon way in advance, I guess that technically makes it the goal for the fall. Looking at our Tour de Columbia for the fall (www.columbiarunningclub.com), we have a half every month in Sept/Oct/Nov, so I figured what better way to help me train than 3 dress rehearsals for the real thing in Kiawah in December.

First up: the Revolutionary Run Half in Camden. It’s a first year event, though Eggplant and Erin Roof were involved, so I knew this would be well done. I’ve done a few long runs in Camden, the last being in 2012 training for the Richmond marathon, so I knew I it to be pretty flat. That was good, since it’s super early in my half training, and September in SC is never cold. What was best for me is that it was free. I agreed to help promote the Get to the Green 5k in a very early morning live spot on WIS TV in March, so Erin agreed to give me a free registration to an Eggplant event in exchange. Of course, my ego gets fed by any media coverage, so that was probably unnecessary. Still, 4:30 am is rough even for grandiose attention whores, and I think registration was 65 bucks, so I took it.

Waking up Saturday morning I usually question many of my race decisions, but jumping into a half with minimal training with an early 7:30 start in Camden really had me cursing myself. Not to mention my decision to eat wings and drink beer with Trophy the night before. Why not just drop a grenade in my colon.

I got to Camden at about 6:45 and it’s still dark outside, and I’m still in a fog from my 5 am wake up call and being lulled into a stupor by the ride. Pulled the pin on the colonic grenade and then got a chance to actually look at the course. Holy turns, Batman. There was no way I was going to remember this thing. I was half-nervous about this potentially turning into a trophy hunt. Eric and Sarah Allers and Angel Manuel were the competition I spotted early on, but didn’t see anybody else that could clearly take the win. At some point in time, though, Plexico made an appearance. My only hope was Ryan taking one of his classic road trips off the course, but nobody wants to win like that (well, unless you’re Wesley Spratt) . 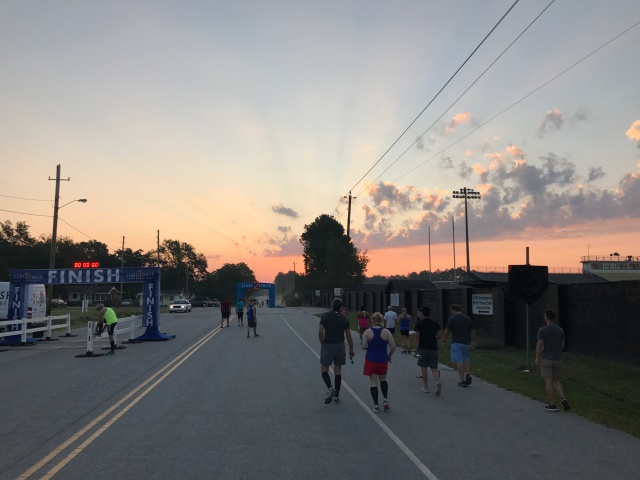 I wasn’t sure what my strategy would be in this race. I had originally planned on a sub 1:30. However, my post Dam Run 10k runs had felt like death, and it didn’t help my little disease vectors, I mean children, were passing around a low grade bug all week. Temps were already in the mid 60’s my race time, with highs predicted in the high 80’s. 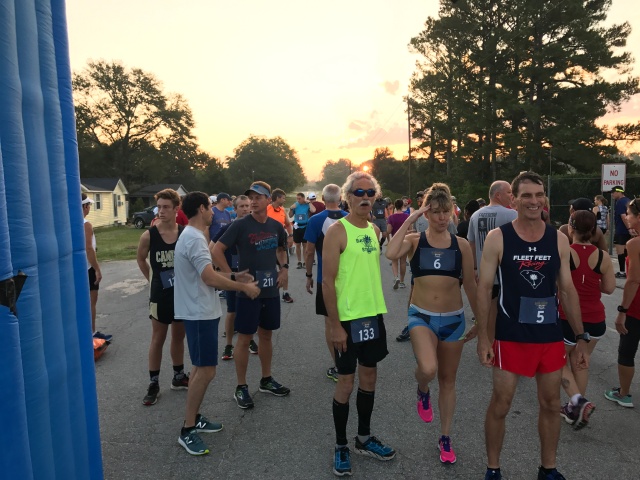 Start was like a jolt since they fired one of the revolutionary musket replicas. Plex took off and left the field pretty much immediately. I settled back and figured I’d target 6:50 something to get started (1:30 is 6:52 pace). A lot of people jumped out ahead but I told myself I was going to be smart and not kill myself right off the bat. I ran along with Whitney Keen, who was doing his first half. He had told me a 1:35 goal but I figured he would do way under that. I’m talking him most of the first mile when my Garmin split pops up for mile 1. 7:15. DAMN IT. I’m only a mile in and I’m way, way off pace. I look ahead and see Heather Costello, Angel and Eric about 50 meters ahead. Yep, that’s where I’m supposed to be. Crap. I try picking up the pace some. It initially feels OK, but I’m not making a whole lot of ground on the pack ahead. Mile 2 comes back in 7:05. Way to blaze it, hero. Already going 35 seconds into debt against my goal. Ramp it up a little more. Mile 2-3 is straight on 601/Broad St right through the center of Camden. I thought it was dead flat. My lungs and legs now inform me that it is actually a long, slow incline. I may be headed north but things seem to be going south in a hurry. Just not feeling it. Mile 3 seems to take forever and it’s still over pace at 7:00. Not much closer to the pack, but at least I’m not losing time to them. A guy and Costello have fallen off a bit, while Angel is still in sight. Eric has gone on ahead. We finally turn off Broad near mile 4 (another 7:00). There seem to be some pretty historic homes and stuff, but I’m just focused on trying to keep this race from imploding. We end up on a long stretch on some gravel road at some point soon thereafter and we finally get some downhill for a bit. I manage to click off a couple of 6:52 miles for 5 and 6, my first on-pace splits. But there is definitely not going to be a heroic, fast finish. In fact, everything feels terrible. The heat is definitely a factor, but the legs also have no spring. I had seriously thought about bailing around mile 4, but the eject button felt even closer 6 and a half miles in and realizing you’re not even half done. There is a little loop starting right at mile 7 near Kendall lake, and before I can even get there, Plex comes flying towards me the other way. Dude is killing it. Nobody anywhere near him. The loop has a couple of nasty little hills and by the time I get out myself I’m a little afraid that I might have to pull the plug again – head feels like a good pass out on the side of the road might be nice. But I can’t bail on the corner where Whitney’s wife Caroline and daughter Julia is cheering, plus I don’t want Whitney himself beating me. Fortunately for me, everyone else is not having the best time either.  I hit a long straightaway  near mile 8 and I finally catch the dude from the back of the Costello/angel/eric pack. Heather is right ahead and I just try to keep up with her. Miles 8 and 9 were 7:16 and 7:21, just trying to finish at this point. After the mile 9 marker is a long, slight decline mirroring the reverse of the 601 climb. For the first time since mile 2, I start to feel OK again. Not great, but well enough to feel like maybe I’ll finish. At some point, Heather can’t take the giant Sasquatch huffing and puffing behind her and I pull ahead, no one really in sight at this point.

Just as I pass Heather though, I hear heavy footsteps and I just know Whitney is about to kick my ass. I look to the side and some random guy has decided he’s going to kick it in like right then. I tell him to go get it, figuring he may fizzle out, since its not even mile 10, but he just destroys me on the straightaway. Mile 10 and 11 are both around 7:06, and by the 11 mile mark I can see Angel and some kid running side by side. I’m slowly making up the gap, but they are pretty far ahead. With the end near, I try to ramp up the effort a little, but not too much, lest I decide to wander into pass out mode again. Mile 12 comes back in 7 flat and I can see all we have left is a little bit of road followed by a loop in Revolutionary Park. Some part of me wants to mail in the last mile and stroll across the line. The other part sees Angel and the kid ripe for  a good blue shoeing. If you know me or read this blog, you know which side won out.

As soon as we hit the park, I start shifting into overdrive. Angel may sense a Sasquatch  in his midst since he leaves the kid and surges ahead. I overtake the kid pretty quickly, then he passes me back as we all three fly down a hill in the dirt. As soon as we hit the bottom of the hill, the course starts looping back and the sand content of the trail suddenly seems to increase 10 fold. Feels like I’m out with the kids on the playground. Its miserable as we start the trudge back towards the finish, but Angel is not more then 10 meters ahead. Time to go all in . Chips get pushed on the table and out comes the headless chicken. I catch Angel and give it everything I have up the hill. Suddenly I feel like Lando Calrissian being sucked in by the sand monster.

Feels like I’m running in place while my lungs struggle to free themselves from my chest. Where’s Han with his blaster??  By the time I hit the road I’m pretty much toast, but I’m deathly afraid of Angel or the kid catching me back. About 200 meters of road to the finish. Near the last block or so, I can see the clock in the 1:31’s. One last surge and I manage to the get just under 1:32 with a 1:31:53. 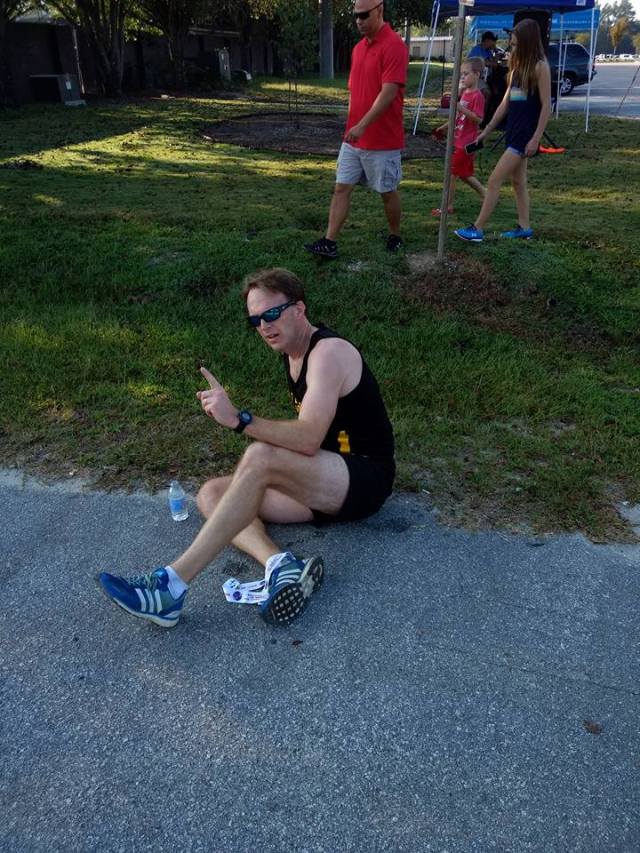 OK, so far from my best effort, but on this day its about as good as I could have hoped for, especially with seriously debating dropping out several times. Good enough for second master behind Eric Allers, who did a 1:30:27.  Not a lot of fast times with the heat. Whitney did kill his goal with a 1:32:54 for his first half – very nice. I felt terrible for all the runners coming over 2 hours because I swear it was 10+ degrees hotter not more than a half hour after I finished. I was taking pics at the top of sand monster and got dehydrated just standing there. Luckily they had beer at the finish, which aided with my “recovery”. I look very classy clutching a trophy and a bud light with my official race photo. 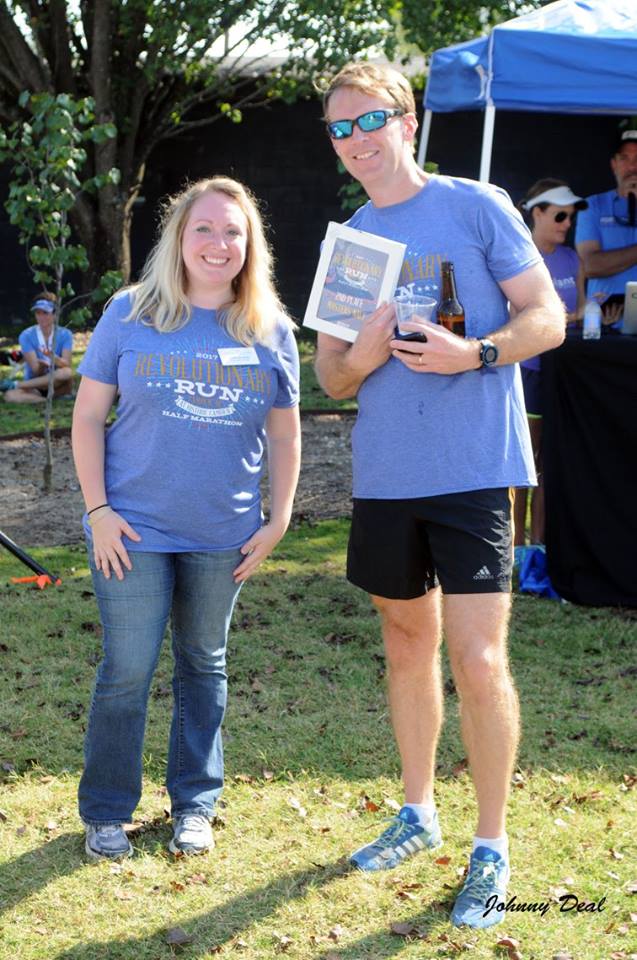 In the overall, Ryan Plexico torched the field for the win in 1:20:40, followed by Mark Truesdale and Robert Wiley. In the women’s race, Heather Costello easy took the win in 1:33:56, with Suzanna Hall and Lesley Lavasser also placing.  In female masters, Sarah Allers won by over 9 minutes, with Laura Pratt 2nd and Khamphiou Boualapha 3rd. Eric Allers won male masters in 1:30 and change, with me and Angel filling out the podium.

Age group honors: Grant Maree from Camden high was the kid in my showdown with Angel in the park – he took 1st in the 15-19. Thomas Outlaw was 2nd in the 30-34 men, while Jeryl Graham placed 3rd among the women. Whitney Keen was 1st in the 45-49 in his first HM. Terrell Burch and Mark Chickering took the top 2 50-54 men, while Melinda Cashion was 2nd among the women. Larry Bates crushed the 55-59. Geary McAlister  won the 60-64 by a half hour.  Carol Wallace won the women’s 60-64 by over 10 minutes. David Spark rocked a 1:37 at age 68, has to be the best age-graded time of the day.  Bill Iskrzak placed 2nd. Lynn Grimes won the women’s 65-69 only by an hour and 17 minutes. Close one! Ron Hagell was champ of the 70+.  Special props to Kaye Sostak  and Nancy McKnight, who double dipped with another half on Sunday in Charlotte. Hardcore! 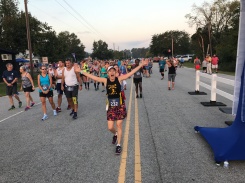 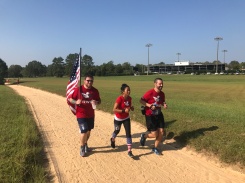 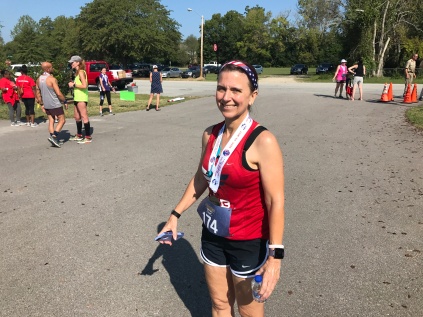 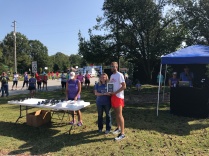 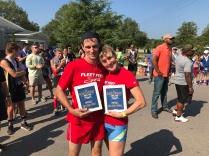 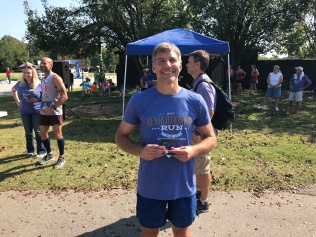 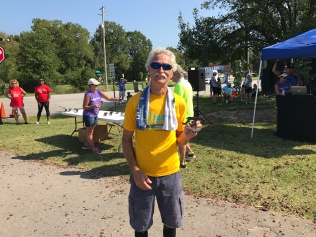