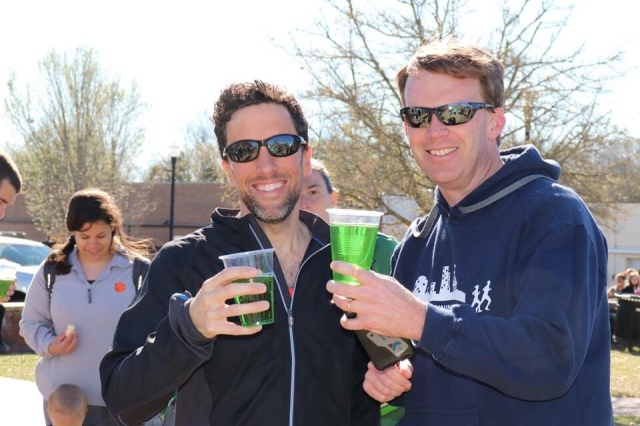 So I wasn’t going to do this one.  The Run Hard 5k/half/full marathon has always been close to my heart, so I was pretty sure I was going to field a relay team or maybe even make a go at the half. I also still had chick-fil-A coupons left over from my unexpected masters win in the 5k last year. But if you know Columbia area race directors, there are few more persuasive than Erin Roof. The Lucky Leprechaun was one of her new races and she wanted to make sure there was some CRC representation. I was resistant at first, but Erin knows my weakness: my insatiable ego and need for attention. So she first tried to ply me with the green beer at the finish and 3 deep masters awards. But then she found out that the race fell on the most egocentric of all days – my birthday. She pretty pleased and even promised a birthday cake at the finish, which I thought she was surely joking. She then sent her minions after me, so eventually I caved. I saw the race time at 9 am and figured I could score a double dip with the Run Hard/Chick fil a 5k. Perfect…or not. Going to sign up for chick fil a I realized that the start time was at 8 am instead of the 7:30 start for the half/full. I still held out hope for a double, but running the numbers, I realized Camden was about 40 minutes from the Run Hard race site. At least by safe, speed limit abiding google maps driving.  Pssh. While still theoretically possible, it would have made for an unbelievably stressful transition – like jumping in the car and speeding to Camden immediately. I decided that dying in a double dip attempt on my birthday wasn’t a good way to go, so I nixed the idea. In an effort to support my hometown race, I would at least take pics at the half/full start.

Race day set up pretty nicely, as the weather had cooled down from the summer-like February we had. I was able to park my trusty 2005 pilot/mobile locker room in a getaway position on Assembly St and it took a solid 35 minutes to get to Camden, even with my leadfoot tendencies. It was a good thing I didn’t try to double, since I really didn’t know where I was going either. As it turns out, Camden’s town square is in the interior of  a city block without named roads. I think I did 10 minutes of touring the downtown before I figured it out for sure.

There was a decent crowd on hand with a pretty good Columbia Running Club contingent as well as the usual Lugoff/Elgin crew. This race was on our tour in addition to Run Hard and the trophy hunt of the day, BC’s run to the plate. Drew Williams, Tracy Tisdale, Ken and Patti Lowden, Sarah and Eric Allers stood out as likely fellow Erin Roof victims, I mean targets, I mean friends. Jennifer Reeves and her fiancé Jason Norris, Whitney and Caroline Keen, Leeds Barroll, Heather Costello, Martie McCallum, Ginger Catoe, Kara Clyburn, Rocky Soderberg,  Jim Williams and Arnold Floyd were some familiar faces. Parker Roof was designated as the official Lucky Leprechaun, complete with Irish boxers. Erin apparently likes to have people run in their underwear. There was mention of a prize for anyone who could beat the leprechaun, which I had figured would be some dadbod costume wearer, not a sub 18 capable high school kid. Doh!

This race appeared to be a pretty easy rectangle in Camden, which I usually associate with being pretty flat. With the start, Parker takes off like a maniac and leads from the get-go, with Drew and Eric on his heels. I feel pretty good in the first quarter mile as we navigate north towards and across Hampton Park. This feeling ends with punch to the stomach with the turn on Lyttleton. There is a slight uphill grade for a good mile-plus, which wouldn’t be so bad except for the sudden gale force winds blowing right in your freaking face.  Everybody slows way down as it suddenly feels like I’m running in place. I spend my time debating the physics of whether my wind resistance is increased with my tractor trailer physique or lessened by the force of my mass. My 5k physics is less than ideal, but I’m awakened from my math by my Garmin chiming in at 6:24. Not too terrible considering the conditions. My other pre-race fuzzy math thought that mile 1 was near the turnaround point, which of course makes no sense on a mostly out and back 3.1 mile route. The Lyttleton hill and the 15 mph wind just kept going and going. I  had noticed Whitney Keen had crushed the first mile and had a huge lead on me, but my melon headed ego figured it was only a matter of time before I reeled him back in. By the turnaround on Greene St, though, I really hadn’t made much of a dent on his lead. We round the corner and its a big relief to get rid of the wind and the incline, with the remaining mile plus returning to the finish on a slight downhill. I wish I could turned it up a notch at this point but it took me most of the way to mile 2 to catch my breatth  again. 6:27 second mile split, which I was none too happy with. With a mile to go, I realize I’m going to have to really crank it up to catch Whitney because dude is still killing it. Meanwhile I notice Parker has completely fallen off the back of the lead pack and I’m catching up to him quickly. I’m not entirely sure, but I’m already betting Parker is under strict marching orders to let the Sasquatch beat him. I pass Parker and start laying the hammer down. I am making up a little ground on Mr. Keen but damned if i’m not making much progress. Pace gets a little hotter and I’m pretty much redlining it by the time we near East DeKalb near the town square. At some point on DeKalb I come to the harsh realization that I am getting a legit beatdown at 100 percent effort and there’s nothing I can do about it. Plus with this aging beast field, I count 3 fortysomethings ahead of me. At least Drew and Eric are going to get overall. I hear my Garmin beep but I can’t check it in full headless chicken mode. Whitney whips my tail by a good 15 seconds and I cross at 19:25. Knowing Erin is always poised to catch my post-finish pavement make out session, I make sure to remain on my feet, though I probably equally look like hell standing up. OK, so not a terrible time for me, especially considering the slowish first 2 miles, quick garmin check gives me a 5:53 last mile. Sure helps when the wind is behind you and the course is downhill. This would be a really fast course without that wind because the incline on the way out is not that bad.  Not thrilled with my placement as 2nd master, but a couple of green Rolling Rocks help drown my sorrows. 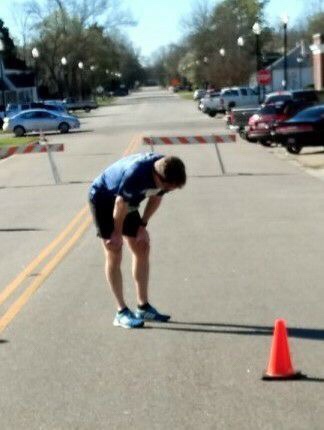 Oh, but lets not forget the awards. Erin decides to lead off the awards not with thanking sponsors or congratulating the winners, but with an extended Happy Birthday singing and presenting me with a cookie cake. Being in Camden, about 90 percent of the crowd are wondering what the hell this is about, but since most are hitting the Rolling Rock, they still oblige. All hail 5th overall. My giant head grows another size. Thanks, Erin!

Although being upstaged by a newly 43 year old sasquatch, Drew Williams took home the win in 18:31, besting 30 year old Colin Barth by 10 seconds. Third went to Eric Allers in 18:44. On the women’s side, Heather Costello took home the win in 20:58, with Sarah Allers second and Martie McCallum 3rd.

Thanks for all a great race and all the birthday love, Erin! Next years race date is March 2, birthday of Roy Shelley. I can only assume that all pasty white masters birthday boys will be similarly honored in 2019. 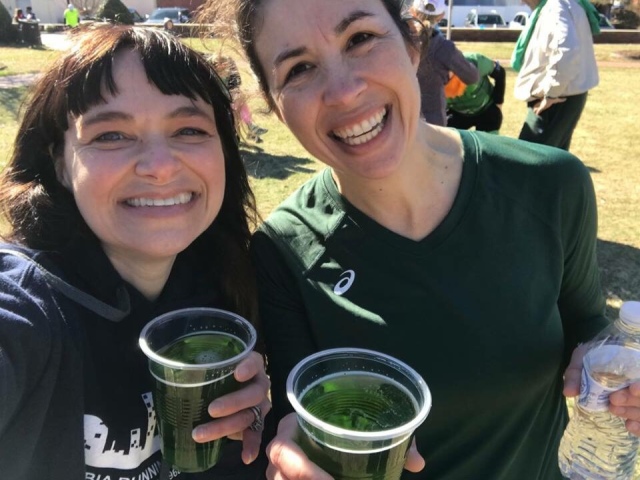 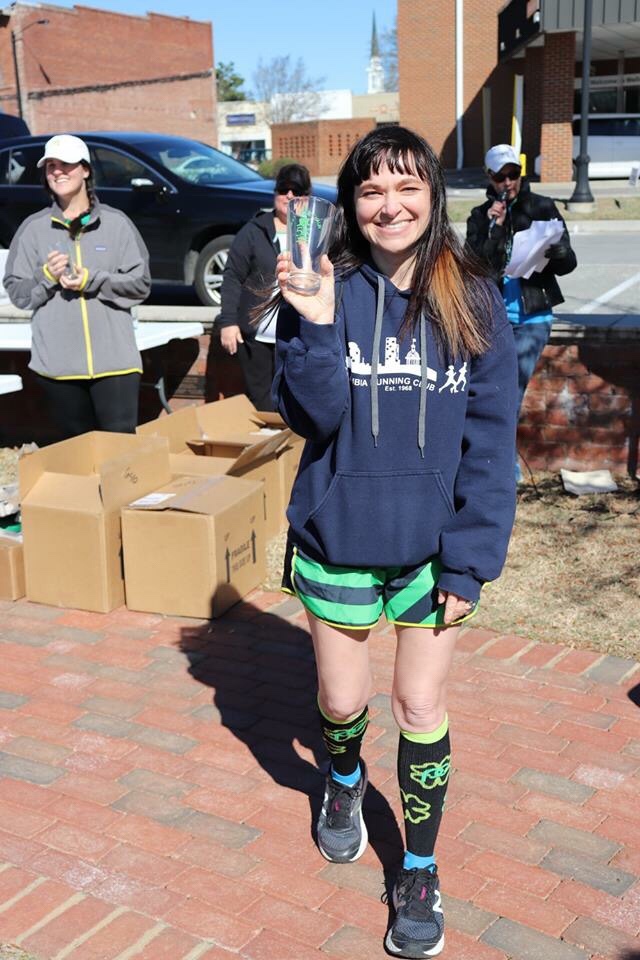 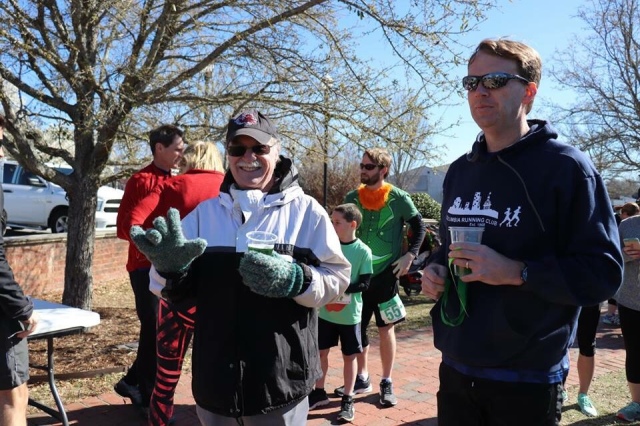 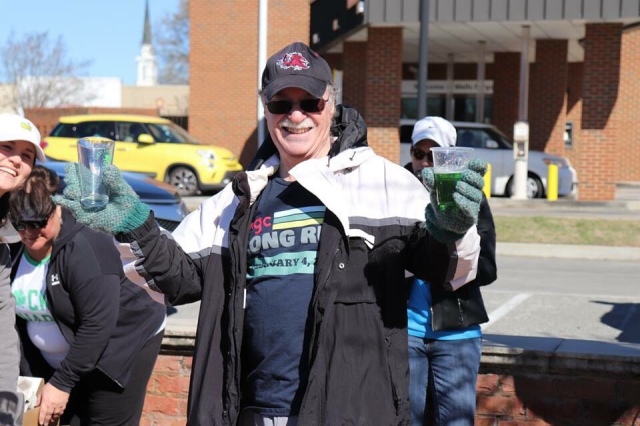 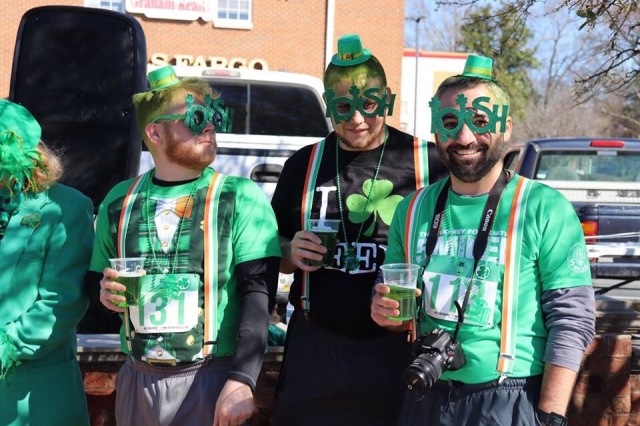 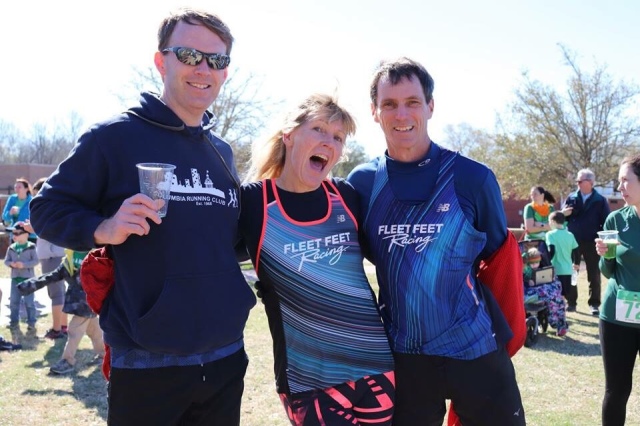 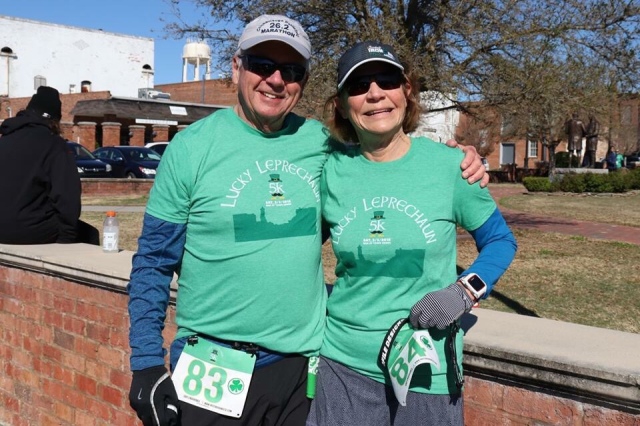 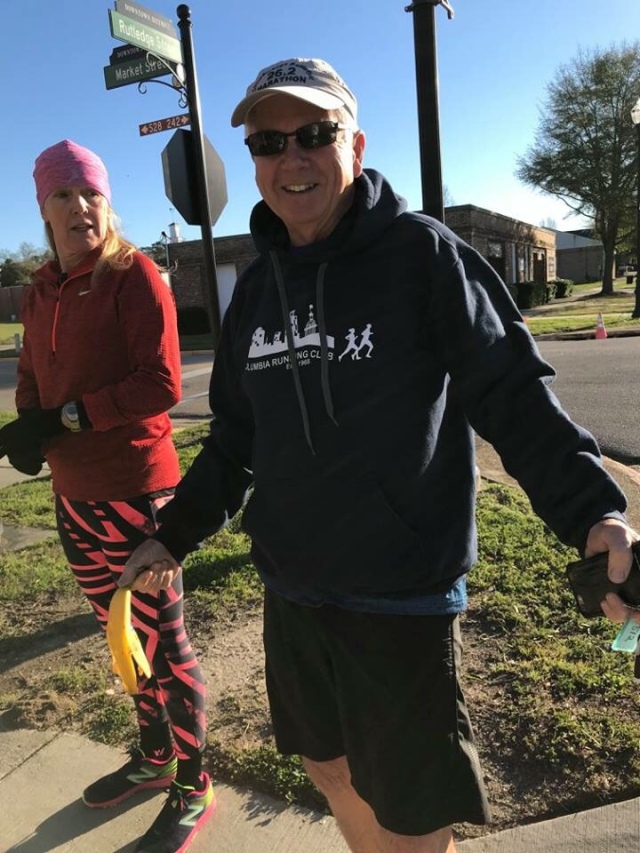