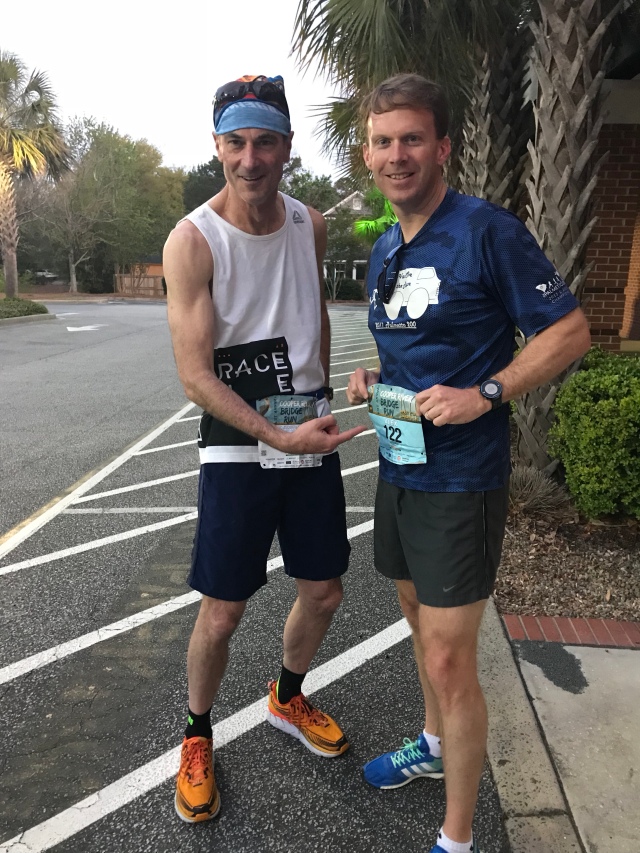 Truth be told, I am not a fan of “big” races. Corrals, hotels, and expos are really not my thing – I’m much rather drive to a rural mom n’ pop style race and go trophy hunting with a few dozen other people. But if you’re a runner in South Carolina, or anywhere in the southeast for that matter, you are going to do the Cooper River Bridge Run in Charleston. Born in 1977 by the Charleston Running Club, that little 10k has grown to be one of the biggest races in the country, attracting about 40,000 people every year. The race brings out elites from all over the world, with the winners usually crossing the line around 28 minutes.

Despite running a race almost every weekend since 2009, I have only done the Bridge Run once, in 2013. This was the year after they had a snafu at the start with the shuttle buses not arriving on time, so I made sure I got like the first bus out at 5 am and sat in the corral for 2+ hours. FYI, this is not the way to do it. I ended up having a great race though, running a sub 20 second half en route to a 40:38 and a PR at the time. I spent most of that race focused on chasing down Shannon Iriel but couldn’t quite catch her. As the 2018 Long Run 15k proves, some things never change. 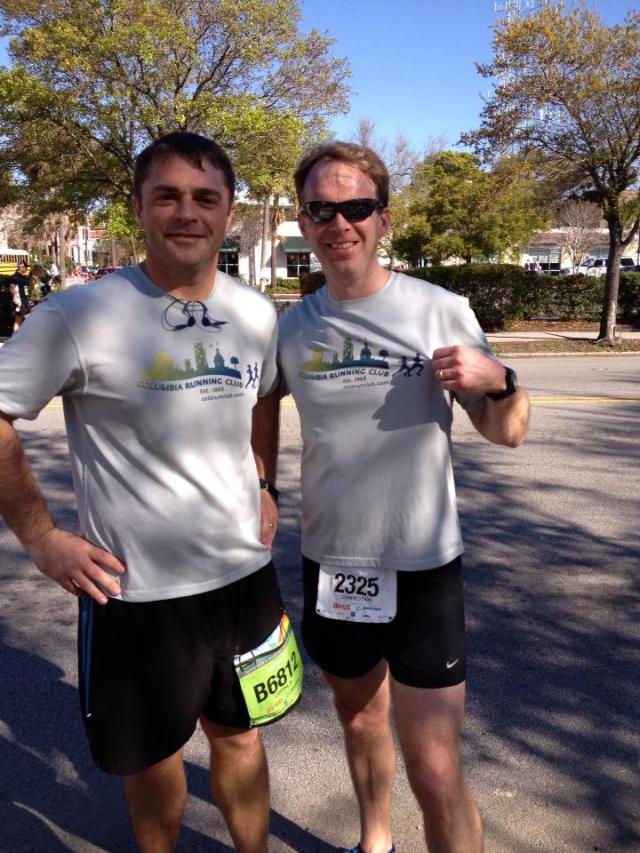 I might have returned the next year, but I decided to almost die that summer in Kauai, and rehabbing from that and a general distaste for 10ks kept me away since. Last year though, I had one of my best races ever at the Dam Run 10k with a 39:23. I was thrilled with finally getting my sub 40,  which not only accomplished a personal goal but qualified me for the “seeded” corral at Cooper River – the one just behind the elites. I think I signed up for Cooper River that night.

As is the case with most of my plans made over celebratory beers and a nearby computer, my intent on replicating the sub 40 at the Bridge got pushed to the wayside. Between struggling to keep healthy and the Palmetto 200, I didn’t really think about Cooper River until a week or so before the race. While I originally planned on bringing the whole family and staying in Charleston for the weekend, my equally impulsive purchase of Avett Brothers tickets made me have to be back in Columbia by Saturday night. I was able to change the hotel reservation and just make this a solo trip to focus on the race.

It should be said logistics is a big issue for this race, which they handle remarkably well. The course is point to point, with the start in Mount Pleasant and the finish in downtown Charleston. That means 40,000 people are going to want to get back to their cars at some point. Fortunately, they have a whole battalion of school buses for this purpose, and a bunch of potential shuttle stops. I thought I had gotten a hotel close to the start, but as it turns out it was more like 3.4 miles.  Luckily for me there were 2 shuttle stops close by, so I was still set. Despite an ill-timed Jimmy Buffett concert at the same place as the expo, I was able to swing by the day before, dodge some early hard partying Parrotheads and check it out. It’s as big as one for a marathon. I was able to make it out with only an impulsive 60 dollar hydration belt purchase. Apparently a fool and his money are soon parted.

My alarm rang at 5 am in my hotel room and I again wondered why the hell I do this to myself every Saturday. Everything went smoothly with the shuttle nearby and I was deposited at the start line just before 6 am. Weather was crazy warm – almost 70 degrees, and a bit of a swirling nasty wind. At least I wasn’t freezing my balls off like in 2013. I met up with Randy and his “bridge crew” – apparently these guys have been running the Bridge every year since 1998 or so. Silent H said he laid off the late nights this year, though he has been known to go heavy on the beers and Italian food the night before. I’d hate to be Randy’s race morning portapotty. It was nice to be able to kill some time with these guys. The H and I  then made our way to the start, did about a mile and a half to warm up on Simmons St. After a multitude of anxious potty stops, I got to take in the rarefied air of the seeded corral and my ridiculously low 122 bib number. Having squeaked in there, I’m sure all the lean singlet types were wondering who let the Sasquatch loose in the corral. Randy’s been there many times before with numerous sub 40’s but race organizers wouldn’t give him a seeded bib this year- c’mon guys the dude deserves it! Nate Carrasco, Shawanna White and current 2018 tour de Columbia  overall leader Mike Schrum were on hand.  It was cool to see all the elites warming up – these guys just glide over the ground – so jealous. Last year’s winner Shadrack Kipchirchir with his number 1 bib was right in front of me. I was sure to let him be my 4:30ish pacer.  As the start time approached, they merged all the top corrals together, so I ended up right near the front of 40,000 people with H, Geary McAlister, Brian “El Capitan” Clyburn and Jen Kryzanowski.  I was shocked Brian and Geary were running since they were both part of our walking wounded from the P200. Jen had her eyes on a sub 40 also, so I knew she would use her favorite blue shoed windshield to help. 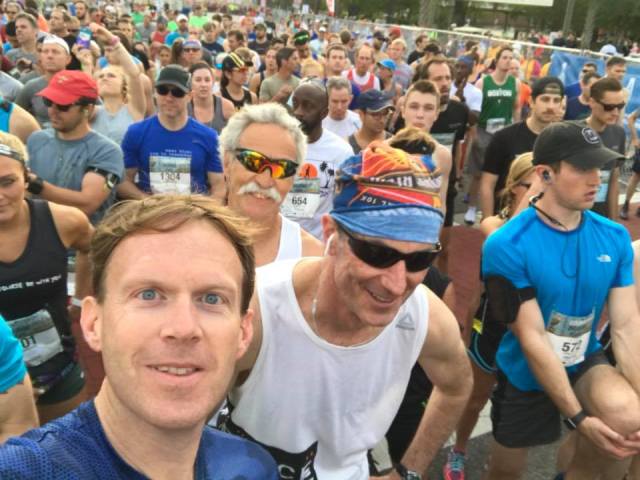 As expected with the swarm of beasts at the front, the start was mayhem. My goal was to take it out in the 6:20’s and see what happens. It’s really tough not to get carried away when everyone around you is crazy fast. I was even able to draft off some bigger guys, which never happens in local races. Any help against the wind is golden, because its swirling all over the place. Jen is right off my shoulder as were able to navigate the crowd pretty easily after the first quarter mile or so. First mile in general is pretty much flat, and my Garmin gives me a 6:20, which might be a bit fast, but not too bad . In hindsight though, maybe mile one would be a good one to lay off a bit in prep for what’s next. Why’s that? Because miles 2 and 3 suck with a capital S . Yeah…the whole bridge thing. I like to fancy myself an expert hill climber, but I’m really good at knocking down short, steep grades. The Bridge’s incline starts ever so slowly and just sucks the everloving life out of you. There’s a especially nasty incline with the onramp from coleman blvd, and I’m telling myself – hey I can see the top right there, the incline’s not so bad, yada yada yada. Then I realize that we haven’t even hit mile 2 yet, and mile 3 is just over the top. Mile 2 comes back in 6:40 with the first part of the bridge taking its toll. MUST KEEP PUSHING. Yeah, the third mile is just a nightmare. Between the wind, the humidity and the brisk first mile, the wheels are wobbling and ready to come off. The top of this bridge seems so close but it just never seems to come. Feels like I’m power jogging in place and I can feel this race is about to be an epic disaster. I lose Jen behind me but I’m getting passed left and right as the struggle bus winds its way to the summit of this mountain. Finally the bridge levels out , but I’ve got a bad case of jello legs and the gasping for airsies. I seriously debate pulling the plug on this bonk, but I can’t handle the shame of walking with a freaking 122 bib and getting passed by tens of thousands of people. I suck it up though the first eff bomb gets dropped with my 7:10 split for mile 3. Nice marathon pace in a 10k , cool guy! The 5k split is just a hair under 21. I try and ride the downhill as much as I can on the other side to make up some time, but lungs and legs have discussed it and they decide EFF NO.  I do manage to use my Sasquatchian physique and Newtonian physics to decent effect on mile 4,  clocking 6:35, but its almost all downhill. Finally off the bridge, we take a left turn and head into downtown on Meeting Street. I know its all flat on the peninsula, having lived in Charleston for 2 years and visited countless times, but I am really hurting by now.  I keep hoping I will get a second wind and I’ll start kicking it in any moment, but it seems like my racing legs have decided to call it a day. Going as hard as I can and getting about 6:40 for mile 5. By now I’m just begging for the finish and I keep eyeing my Garmin to see where I’m at – which  I never usually do. I hear someone call my name and all of a sudden Brian Kistner from last years P200 team comes up behind me and passes me. I hate getting passed but I’m actually more surprised he’s been behind me all this time – dude is a beast. I try and latch onto him and though he’s definitely gapping me, at least there’s someone to chase. Finally we hit the turn from King street to wentworth and back on meeting. I hear the Garmin chime but I’m to gassed to look at it, but I can see the mile 6 gun time click over to 40 minutes.  Way to hit your goal time, hero. I launch into a feeble kick as there are a couple of age groupery guys lurking about,  and I cross in 41:25. Just wiped.  Again, probably started too fast and the conditions were rough, but still pretty bummed about the time. Still managed 240th overall, 19th in age group, 41:22 chip time. 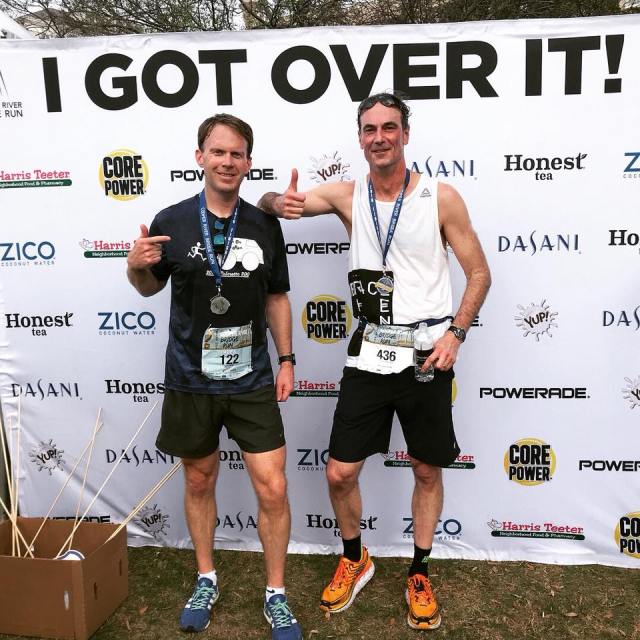 Not a whole lot of good times from people I knew, though major props to Nate Carrasco crushing a 38:38 for a big PR. Randy wasn’t happy with his 43:16, but he still scored a top 10 ag finish with a 7th in his new 50-54 age group. I may not be back every year like Silent H, but I’m sure I’ll “get over it” and try to conquer the bridge again soon. 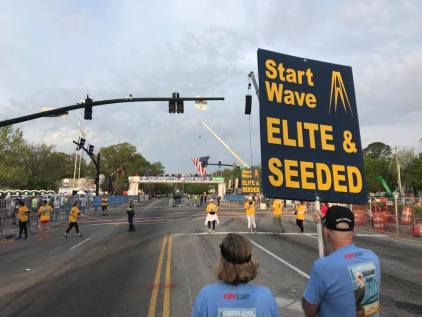 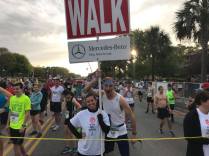 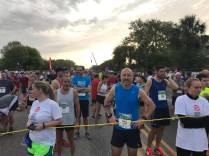 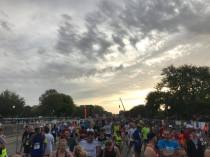 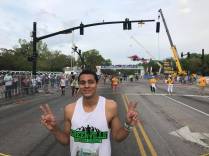 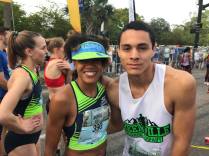