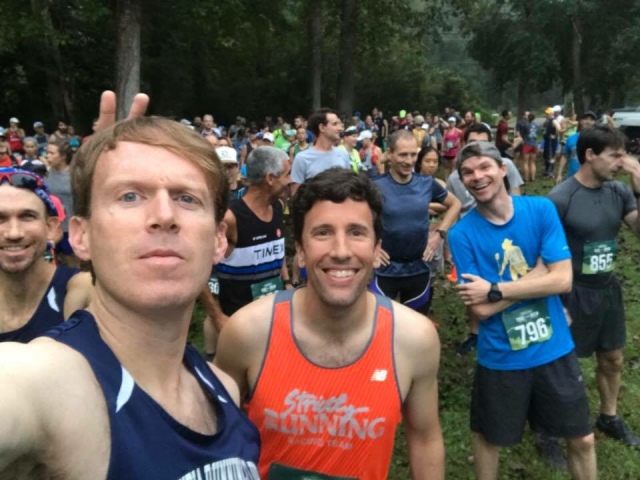 The True to the Brew Half Marathon is the second in a possible series of races highlighting the Palmetto Trail, put together by  Palmetto Conservation and promoted by Erin Roof’s company, GRIT endurance.  I loved the first race in the series, a flat and fast 6.5 miler on the Peak to Prosperity trail in April, complete with tons of beer and music at the finish. I was all in when Erin announced this trail half, sponsored by RJ rockers brewery and running through Croft State Park, where I camped earlier this year. Unfortunately,  unlike a certain Supreme Court nominee, I don’t keep a very good calendar, so I didn’t completely think this one through.  Sure enough, I’m putting up my August/Sept/Oct months on my office wall, when I notice the end of September. Ruh Roh. Table Rock 50k Sept 22, True to the Brew half Sept 29.  This was going to suck.

As noted from last week, my entire lower half was pretty much useless in the days following the 50k. Not to mention the epic chafing that had me walking like a bow legged sailor with VD for the rest of the weekend. I did manage a 2 mile shakeout on Monday and two 4 milers on Tues and Wednesday, but even these short jaunts were pretty rough. Legs like cinder blocks. I tried not to hate Tracy McKinnon’s strava when he posted a 10 miler at 7 min pace the Monday after beating me at Table Rock by over an hour. Damn that ultra beast.

Fellow racing drinking buddies Rob THE YERG Yerger and Drew Williams decided to join me this time. There was an alcohol restriction at Croft, so we had to make sure we got true to our brews at packet pickup instead, which was held at RJ Rockers on Friday night in Spartanburg.  They give you a free Palmetto trail pale ale coupon in the race packet,  but I also had a flight of some of their pale ale/IPAs. I made a point not to get wrecked like I did in Morganton before the 50k. Even though this was a hell of a lot shorter, 13.1 miles on destroyed legs was going to be tough enough. Hotel accomodations were significantly better than the sketch Days Inn from last week, though I had to do an epic late night grocery run to procure my race breakfast of choice, Pepperidge Farm cinnamon raisin bread. Don’t leave home without it. 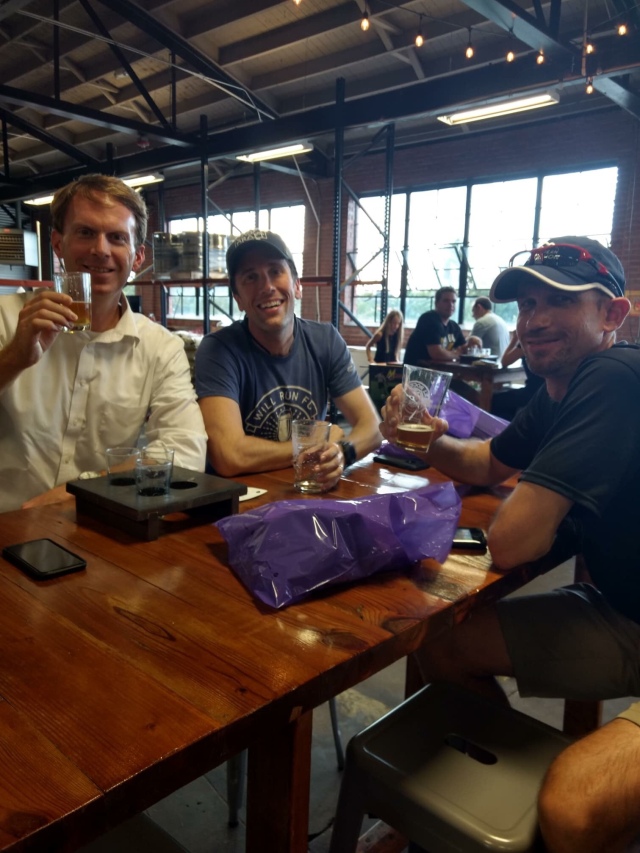 Showing up the next morning I was definitely not feeling it. Between the dark early morning and the 20 minute drive to the start, my piriformis wanted to get crazy tight. I decided to skip any warmup because I was probably going to be slow as hell anyway on the race course.

Since this is a Tour de Columbia race (we bend the geographic rules if there is beer and Erin involved I guess), there was a decent Columbia contingent. Mike Nance was on board to pull a hell of a double – he was going to do the half in the morning and the “Beerlay” 8 mile and 4 beer relay in Greenville later that day. #hardcore status for that for sure. Lynn Grimes, David Nance (with Jenny Prather for support), Roy Shelley, Gabe Hipps, Darby Shinn, Mike and Janice Compton, Kara Clyburn, Michael Beaudet, Will and Amanda Rowan and Matt Gregory were some of the familiar faces.

With the start, we had a short run through the grass and a paved road at Cedar Springs church before almost immediately plunging into singletrack trail. I saw Drew and Nance take off and leave me in the dust almost immediately. It is a little disheartening when you see 2 age groupers kick your ass from the get-go, but I knew this race was going to be all about just finishing. I tried my best early on to at least maintain a brisk pace, because I knew my endurance was probably going to be shot. Ran through the first few miles in high 8 /low 9 pace. It felt faster than that, but this was decidedly not the peak to prosperity section – plenty of rolling technical trail and very little flat. Yerg was also feeling the 50k pain from last week, so he dropped off pretty early. I ran for a good while with Gabe Hipps , though I could definitely see he had the fresher legs. Eventually he and another dude left me, but I was able to keep up enough to see them to reassure me I was going the right way. The course was pretty well marked, but generally I will find a way to go off track if you can. The middle miles of the race on the Lake Johnson section of the trail were nice, since there seemed to be a fair amount of flat open dirt road. Any section where I could just relax and jog for awhile was awesome for me, because the singletrack is definitely a challenge for someone with less than cat-like agility. Particularly with 50k legs.

By mile 8 though, things were getting pretty rough. The flat road sections had disappeared, and all of a sudden I’m doing some serious climbing. At some point, I finally give in and succumb to a bout of the walksies. Luckily, just as I do, I reach the top of the monstrous hill. I double fist some water and the volunteers tell me its all downhill from here. I originally thought to the finish, of which I was sorely mistaken. They were right about the next half mile or so, which was a glorious downhill. Soon afterward though, I was back doing switchbacks and inclines again. There were some more walksies thrown in, though I tried to keep it to a minimum, because the legs and body in general wanted me to crawl into the fetal position in the pinestraw.  I started seeing more horse poop at this point, which actually motivated me. Not because of some bizarre fetish, but I remember lots of horse trails from my previous trip, and I knew the finish is right where we camped. The last few miles are a blur. At some point the forest opened up with a big weird valley of fallen and cut down trees. I have no idea what that was about, but of course the trail wound up and down and sapped any remaining energy I had. Finally I came upon the finish area. I knew at mile 12 I had an outside chance at a sub 2 hour finish, so I started kicking it in as I rounded the horse area. Just as I planned to headless chicken it to the finishing arch, a volunteer told me to run the other way. OH NO. I was deathly afraid there was some mile long loop or something and I was definitely on fumes. Fortunatelu, it was only an extra quarter mile, but damned if it didn’t rip the soul from my body. I cold actually see Gabe again at this point, but had no chance of catching him. I crashed through the finish arch just as the clock flipped to 1:59.  Just wrecked. So not a great performance, but  not too bad considering the gimp legs. Good enough for 10th overall and 3rd masters.

Drew ended up crushing the win in 1:43, with Michael Pryor 2nd and Nance third. The women’s winner, RWB’s Birte Fretwell from Columbia, actually was the second person to finish. She killed it! Jennifer Lee and Michelle Flemming were 2nd and 3rd.

Special note – I noticed Kristin Weaver and Ian Loughlin at the finish with Jenny, which I thought was an awfully long way to drive to support a friend.  Kristin pulled me aside and told me the real reason. David had told them to come since he had a surprise in his race vest – an engagement ring. David had a rough day on the course and we all kept nervously awaiting his arrival. Apparently he had a long speech planned out, but all he could muster at the finish was to drop a knee and pop the question. You can tell from Jenny’s reaction that she was genuinely surprised and of course said yes. Really cool to get to see this – congrats guys! 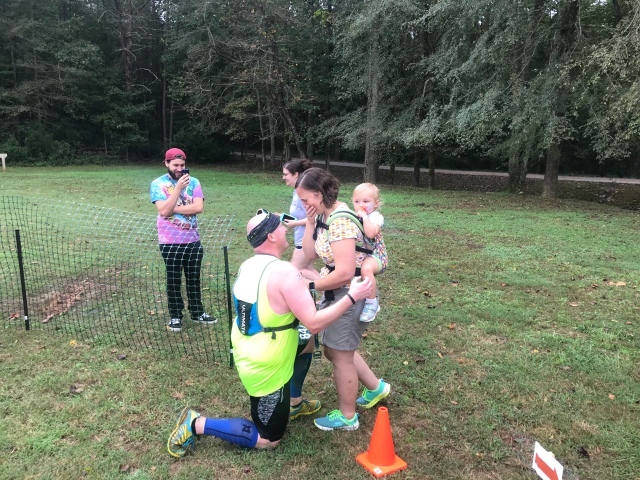 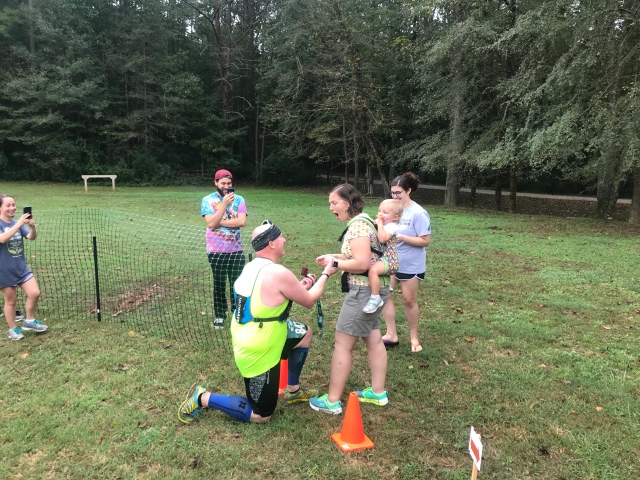 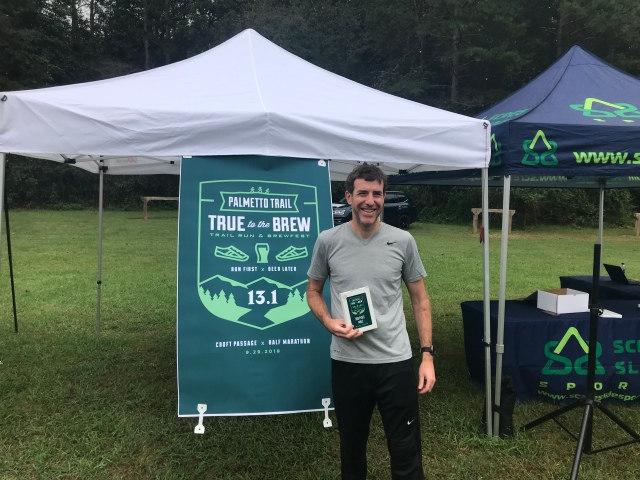 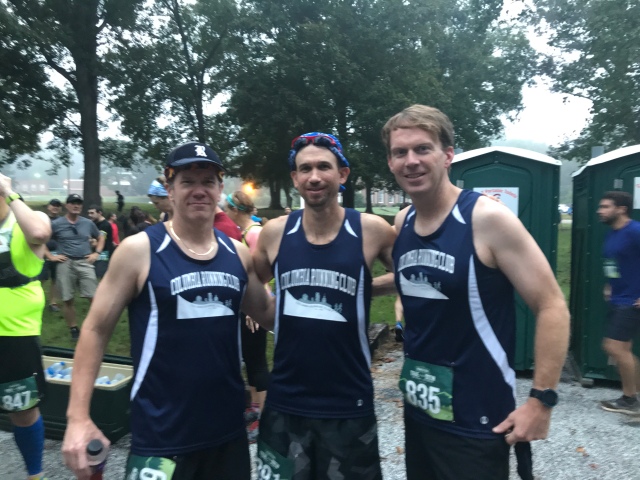 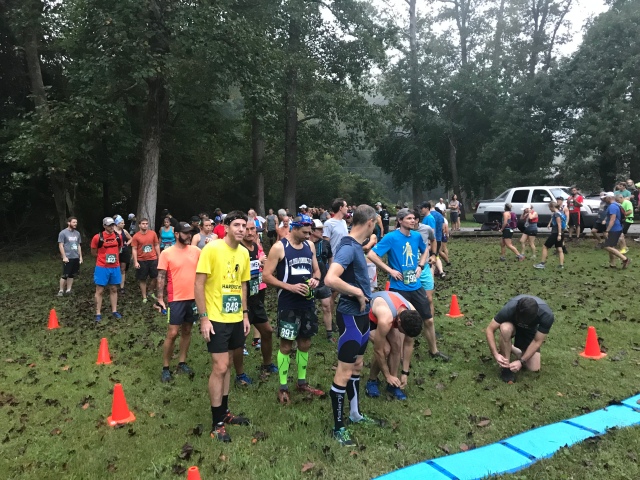