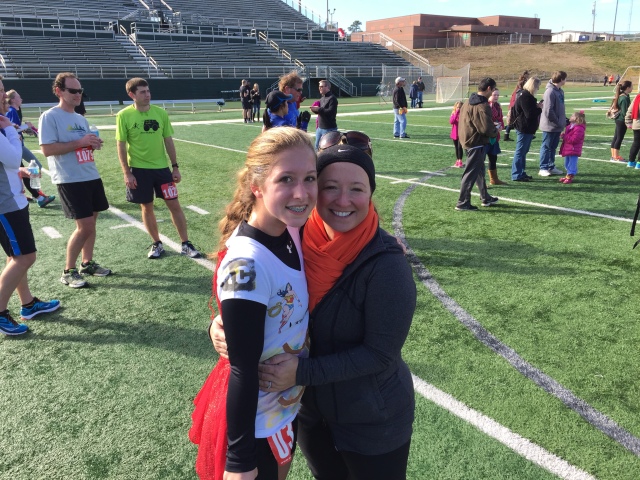 I have a confession to make – I was supposed to be a Dutch Fork Silver Fox. In 1991, Irmo High had grown to the population of a small city and Lex-Rich Dist. 5 decided to break down and finally build a new high school. Set out in the middle of the forest near Kennerly road, this new school was pretty  sweet – brand new modern facilities and everything. With the school opening up in August 1992, they actually gave incoming seniors (i.e. me) a choice – stay at old Irmo or jump ship to the new school.  I did have early thoughts of trophy hunting in the new tiny inaugural class. I  thought of finally getting on the tennis team, being editor of the school paper, captaining the quiz team – my nerd dreams soared high. But ultimately none of my friends were zoned for Dutch Fork, so I stayed put.  I do have an affinity for their cross country and track teams though, since my brother Ben competed for them for the next 2 years, and I occasionally got a chance to come out and see his meets.

So I was definitely in to do this race, which is run completely on the Dutch Fork High and now Middle School campuses. Kimberly Taylor, one of our CRC members, was race director too. Plus a lot of the Dutch Fork kids run our Tour de Columbia races, so there were plenty of reasons to support the race, which goes to fund their program for special needs students.  One cool element was the inclusion of a team format. Anyone knows I love my relays and running teams, so I recruited Trophy, Code and Ted Hewitt to join  Columbia Running Club -Team Blue Shoes in their men’s four man division. You still got to compete for individual glory while doing the team event, which was nice. Critical for my precious TDC points too.

I showed up my customary hour early and there’s already a nice crowd. Kimberly had mentioned over 200 registered, which is phenomenal for a first year event. I knew she had directed a few races down in Charleston so she definitely knew what she was doing. I didn’t know how this course would work, though. I knew Ken Lowden had certified it, so at least the distance would be good. However, routing 3.1 miles entirely on campus meant running a lot of parking lot loops and turnarounds. Though the elevation map looked pretty flat, it didn’t look good for speed, especially when youre a less than agile sasquatch.

My original thought was that this would be a little of an age group trophy hunt – I was sure some of the kids would come out and take the overall but I figured Red Shoe and next week’s Long run might siphon off some of the ever present stealth superfit 35-39 soccer dads. I was actually going to take it easy, maybe even wear my go pro nerd vest to film the course. Then Brandenburg and the Pale Beast show up. Ruh Roh. No fooling around now. These guys were surely out for Blue Shoe blood. Plus there was the team element – I was going to have to pull some weight with Trophy falling into Blackjack mode and Code always hurting with something. At least I was confident Ted could pull off something sub 22.  None of the other usual 35-39 competition showed up, so I guess I was right about that. Jason Dimery and Kenneth “Son of Beast” Vowles were there to make sure I didnt have any greater aspirations than my age group.

The start was a total stampede since there were quite a few kids and the initial 100 meters is slightly downhill. A lap around the large student parking lot separates out the crowd pretty quickly. Kenneth and Dimery are clearly in the lead, with a couple of Dutch Fork kids, then Brandenburg and myself. I decide to latch on JB like white on rice, though we are both blazing it for this early in the race.  I figure this may work to my advantage though, since I must break the Beast’s spirit early on (a la Resurrection Run) to avoid his devastating kick (i.e. Shandon Turkey Trot). Sure enough, we come out of another parking lot loop and the Garmin spits out a 5:59. Yikes. The third loop actually involves a dip then climb, and I power up the go go gadget quads and draw even with JB.  Again no air for snarky comments but as soon as I pass him I can hear him using me as a human wind shield. A long slight downhill ensues and I’m trying hard to avoid my usual flopping around that ends up actually slowing me down.  We take a turn back up the hill, which I think is the long out and back section I saw on the map. Nope. As soon as I’m done powering up the hill, I can see Kenneth and Dimery on the other side of the fence coming right back up. Damn this is going to hurt. Mile 2 in 6 flat, thought I didnt look at the time. After a quick decline I’m right where I saw the other two a moment before, slogging up the longest incline on the course. I decide to go all in at this point. Knowing the finish is in the stadium, I’ve got all my chips on the course not taking any more uphills. So I burn it up the hill pretty much as hard as I can go, sucking all the wind in the greater Irmo area in the process. I’m about dead on the turnaround at the top but damned if the Beast is still on my tail. I must break him.

I fly down the hill trying to harness all my substantial gravity into speed, and trying not to fall on my ass in the process. Looks like I lost my bet because there’s yet another loop with a slight incline. I’m hating life pretty bad, but I still see Vowles trying to track me down as I exit the loop. Finally I can see we’re headed for the stadium. I take a few more steps into the pain cave. I finally pass Dutch Fork’s top girl Anna Johnson and another Dutch Fork guy (later identified as Mark Bradley)as we approach the stadium. I’m in a world of hurt but I know I have to be flirting with the sub 19. Its crushing but we have to do a full half lap on the track before the finish on the infield. Sure enough Bradley comes flying by me on the straightaway. I can see David He and a kid just ahead as I make the last turn. Already in the 18:50’s and no chance to get sub 19. I still burn whatever fumes I’ve got left and almost get David at the line, finishing in 19:08. 6th overall, 1st in AG. My Garmin had 3.25 miles and a 5:54 overall pace, which I assume is a combination of not running the 50 tangents on the course well and the watch not reading all the tight turns accurately.

Kenneth Vowles held off Dimery for the win 17:50 to 18:10. Painfully, he had to give back his 50 bucks to keep his “amateur status”. Mark Bradley, the kid who unceremoniously Blue Shoed me on the track, finished 3rd in 19:02. Turns out he’s an 800 meter specialist and 17 years old, so that helps soothe my pride injury.  On the women’s side, Anna Johnson took the win in 19:27, followed by Emily Letts and Bri Hartley, still just 13 years old (seems like she’s been racing forever).

Among the women (Run Hard’s Jaguar timing separates gender completely) Marie Demetriades (Kimberly’s daughter) made mom proud with a 23:55 3rd in 15-18 AG, blasting a blue shoe style kick. Rachel Tracy (J-Reeves’ daughter) took 2nd in the 19-24. Brie McGrievy has blue shoe level trophy hunting skills and took 1st in the 35-39 AG.  Colleen Vowles may have been running miles 17-20 for the day and still took first in AG. Heather Alexander took 2nd. Stephanie “Stevie Dee” Dukes scored a huge PR with a 27:56. Barbara Brandenburg, Joyce Welch (also tacking on the 5k at the end of a long run) and Jennifer Reeves swept the 45-49. Sue Porter won the 55-59 with Melinda Petruzzi capturing yet more TDC points with a 3rd in her 3rd race of the month.

And let us not forget the teams! In the coed “Dutch Duo”, “Beauty and the Pale Beast” (Colleen and Ken)  are listed as winners, but I believe another team may have actually beat them out since they didnt get the award. Marie and Bri’s team “The Bad Abs” totally kicked some Abs and won the female “Fantastic Four”. Team Blue Shoes did pick up the male “Fantastic Four” over two teams from the Dutch Fork baseball team. Turns out even the gimp Code beat all these guys, so we didn’t need to try so hard after all. A successful trophy hunt ( valentine’s chocolates and Dick’s gift certificates) nonetheless!