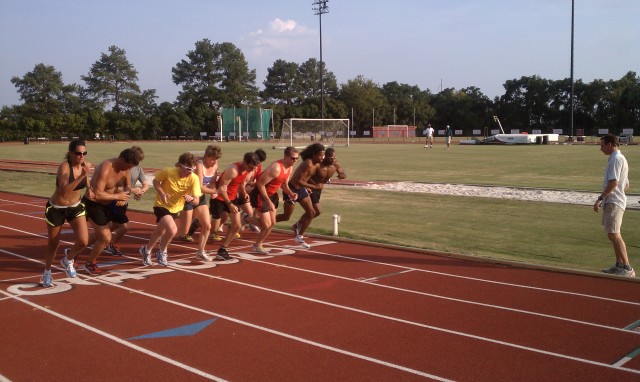 This is the second part of the three date Strictly Running series. My original plan was to do all three events, since the heat was not going to make a great time possible in any of the events, even if I saved up for one. My “warmup” consisted of 24 hamster wheel laps (2 miles) on the indoor track at Gold’s gym, which I figured was still better than the 100 degree temps outside. When I got to the track there were already a few people there, and the final group was about 10 or so. I’m not sure what happened, but there was no official SR rep there or a time clock by 630. Luckily a guy volunteered to start the events and keep track of laps.

I had never done the 3000 before but decided I would try to race this event all out. I knew I’d be cashed anyway for the other events in the heat. I had figured out a 1:27 quarter pace would put me on pace for 11 minutes, which (under ideal conditions) is what I would hope to run. With the start I felt pretty good, trying not to go out too hard. Hit the first 400 in 1:31, second at  just over 3 minutes. The mile was just over 6 minutes, but the heat was really kicking in by then and I started hurting big time. Basically sucked wind the whole last 3.5 laps. Made a point of not getting lapped by Omar and Matt who I knew would crush the field. Barely did that. I was able to muster a little sprint in the last straightaway, finished around 11:34, 3rd place.

Angel’s video of the 3000m: http://www.youtube.com/watch?v=0jeXksT5lBw

After the 3000 I was completely overheated and feeling near death, so I decided to skip the 800, which was less than 10 min later. The race was cool to watch – Angel went out fast with SR runner Randy Finn, both crossed just a shade over 60 sec. Eric McMichael then threw down a ridiculous kick in the last 150 to overtake both of them and finish around 2:10.

I was still half alive at the 1500 start but I decided to give it a go for the sake of a workout, if not for time. Went out trying to go slow but found myself getting passed a lot , which my fragile ego apparently cant handle. Tucked in behind Crazy Legs Schmitz for the first two laps, and was right at 4:30 with a quarter to go. Made a point of trying to break 6 minutes and was able to sprint to a 5:55. Not bad considering how wiped out I was from the 3000.

Now I’m just hoping the weather gives us a break for the Capital City Safe 5k on Friday night in downtown Columbia.