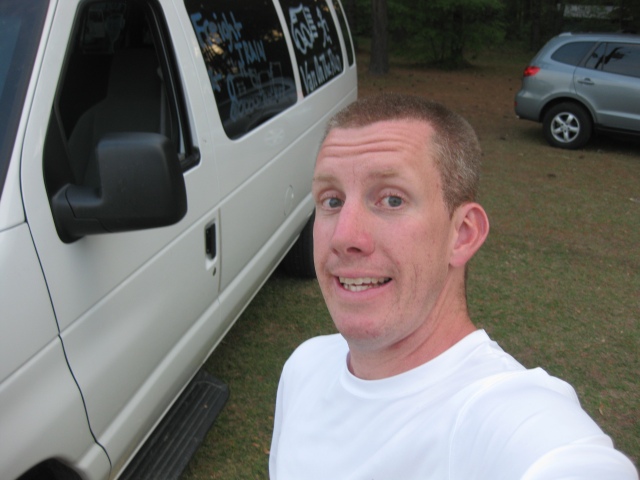 Because of the Blue Ridge Relay, I had to miss the Dam Run 10k this year. I ran this race the last 2 years and PR’d there both times, though since the course is point to point and net downhill, I guess there should be an asterisk. Like Trophy last year, I went out in a ridiculous pace and ended up with the worst bonk ever in Saluda Shoals. Wanted to crawl in the fetal position and cry by the finish. Here is his report:

This is my second year doing the Dam Run 10K.  Last year I ran it for the first time and set my 10K PR.  This year I was out to beat that.  The race usually garners between 400 and 500 runners.  The course was originally much hillier, but was changed a few years back.  According to the flyer this was the 25th anniversary of the race. The beginning is on the Lexington side of the dam and now ends in Saluda Shoals Park .  It is considered a downhill course and is PR friendly.

I arrived around 6:30, planning to do a couple miles beforehand with Diesel and Buckle Up. It was probably high 60’s and felt pretty good. Being who I am, I would have preferred a little cooler. But I was happy with the temperature.  Diesel and Buckle Up wanted to check out the quaint bathroom facilities. If I have a complaint about this race, it would be lack of restrooms.  The women appeared to have a good 20 minute wait up until race time.

Note: Trophy will complain about any conditions short of 50 degrees, sunny with no wind.

Walking to the dam I surveyed the talent that was showing up.  I noticed a few faster guys and quickly surmised I would not be winning.  Daniel Smoak and a couple other fast looking guys were hanging around. We also noticed that the Ashtons were making an appearance.  Quite a few notables were absent, some due to the Blue Ridge Relay which was going on the same weekend.  At the time my age group appeared to be wide open.  More on that to come.

Note: Glad Trophy figured out that he wasnt going to outkick Ashton for the win. I was gone at the BRR, and Code Brown and Angel were MIA, so there was no excuse for him to not age group place…or so I thought.

My plan for this race was to start out conservatively and not bonk the last couple miles like last year.  I picked out a spot a few rows back next to Diesel and Buckle Up, the shirtless bandits. I noticed a kid who looked to be about 10 up on the front row.  Surely he would not beat me?

Note: I could make fun of Trophy possibly getting beat by a 10 year old, though I was destroyed by a 13 year old girl at Lexington RAH 10k.

We started and I had a hard time finding my pace.  I wanted to try to keep a 7:00 or a little lower for the first half of the race, hoping to come to life the last half and have a negative split.  The dam is very hard to pace on.  It’s very flat and there are a decent amount of faster runners, which both make it difficult to be conservative. It’s a great start to a race with the flat open space and the scenic view of the lake in the morning.  Mile 1 hit and I was right on pace, 6:53. A little bit of a gap was already opening up at that point. The elite runners were already nearing the end of the dam. The second mile is not long after you make the turn onto Bush River Road .  I checked my watch and hit that mile in 6:52. So far so good. Mile 3 does a loop through a neighborhood and is quite hilly. I found it harder to keep pace but tried to push through knowing I had some more flat terrain coming up.  Mile 3 in 6:59.  During mile 3 Jeff Burgess caught up with me, and subsequently passed me.  We turned back out onto Bush River Road and hit the halfway point of the race. 21:25  Was almost exactly what I wanted to do.  We hit a nice flat stretch and I sat back about 30 yards behind Jeff and tried to push it through this stretch without zapping all of my energy.  I was remembering all too well the way I felt the last 2 miles in 2010.  Mile 4 in 6:55.  Feeling pretty good at this point. We turned back into the neighborhood.  There were a couple small hills but also some downhill spots.  I think around mile 4.5 the nasty sun came out. There was one stretch where I don’t think I could see for at least a quarter mile. With the light came the heat. Not too bad, but did rise a few degrees for sure.  Was starting to feel some fatigue by mile 5.  Was keeping Jeff in sight and believe I passed a person during this stretch.  None of the bunch that had gone out ahead of me had faded at all. With a little bit of help from some downhill spots I finished mile 5 in 6:52.  So far the plan was working. I was feeling pretty good at this point. Unlike the Blue Shoes, I can not remember exactly what distances hit at what spot.  We were at the end of the neighborhood and hit a small steep hill. I crawled up it and knew we would soon be crossing over into Saluda Shoals. In the distance I saw Greg “Skirt Chaser” Howell and Jeff.  Jeff had tracked down Greg and was up with him now. I was probably no more than 50 yards behind and felt that I could catch up if I could put a good last mile in. With 1 mile to go I calculated that if I ran a sub 7 last mile I would break 43, which was my goal.  On target!  Was feeling pretty good and the last mile is not very bad.  I crossed into Saluda Shoals. About .2 into it though….disaster hit.  I all of the sudden felt like I was going to throw up…or gag…not really sure which.  Combination maybe?  I had to stop and proceeded to make 4 large gagging noises, dry heaves, on the side of the road. It felt like my lungs might come up. I gained my composure and started running again.  After about another quarter mile it hit again.  I again pulled to the side and made some hideous noises. Nothing was coming out though.  I started back running again and heard foot steps. An older man had caught me and I wasn’t sure I could hold him off.  We reached the 6 mile point (bridge) and I reluctantly let him pass me.  But soon after I felt better and felt Blue Shoes in my head telling me to burn it.  So…I did.  With a tenth of a mile left I did a Blue Shoes Jr kick.  Mile 5 I ran in 7:21 thanks to my stopping. Last .24 I clocked a 6:03 pace with a best of 4:40.  Ended up gapping the older guy and beating him by 5 seconds.  My time was 43:21, what I figured at the time to be a PR.  Ended up being a 2 second PR.  If not for my 20-30 seconds of heaving…..I would have met my goal of sub 43.  Oh well.  I still felt very good most of the race.

Note: I would have made Burgess do 20 intervals instead of 13 if he got Trophied again.  Nice kick though. Blue shoes props for burning by a guy 20 years your senior at the finish.

Diesel came through in 47:20, which I believe was close to a 1:30 minute PR.  Oddly enough he can run the same pace for a 10k as a 5K.  Buckle up came through shortly after in 48:26.  An obvious PR for the new runner.  A very good time in such a short time frame of training for him.  Mrs Diesel eventually came through as well.  No PR for her.

Note: Diesel clearly needs a race psychiatrist – he runs faster in training runs then he does in 5ks, and now runs a 10k at the same pace. I should slip him a valium.

Winning time was 31:14.  A 5.02 pace on a 10K. Wow.  I can only assume this was one of the guys hanging with Smoak before the race. He beat Ashton by 16 seconds. Amy managed to hold off Mrs Ashton to take overall female in 38:39.  I remember the days when Amy was in my sight during races.  Not so much anymore.  Great race for her.

Note: Other impressive times are Billy Tisdale and Megan Weis, both who rocked sub 40’s. Im about even with these guys in 5ks but they apparently would crush me in the 10.

I ended up 38th overall and 9th in this atrocious age group.  Amazing considering OJ, DB, Angel, and Blue Shoes were all missing.

Note: I would like to make fun of Trophy and his 9th in AG finish, but I wouldnt have done much better. I dont know who any of the top 3 in our AG are.

The 10 year old I mentioned earlier must have run rogue according to the absence of a bib or time.  But his picture was well before when I came in.  Nice.

I would like to thank the Blue Shoes for his continued support (harassment) over the years and for being allowed to be a guest blogger.  I can only hope I provided as much detail and entertainment as he does.
Well done, Trophy.