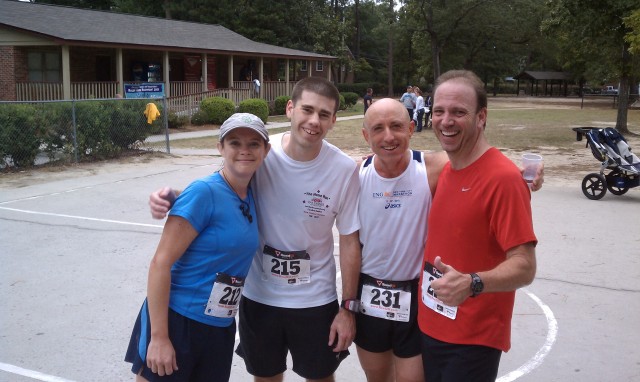 This is the 7th year of this race which benefits FAVOR, an addiction recovery advocacy group.  I really like this race because the course is fairly flat and most importantly, it has one of the best and most ironic age group awards. Pint glasses with the race name on them.  I have two from the previous years doing this race and count them as some of my favorite beer glasses in my extensive, mostly Flying Saucer related,  collection.  Last years race was tough because of the heat, but this year the 3 ton elephant that is the Columbia summer just got up and abruptly left. It was 95 on Thursday but the high was mid 60’s on Friday, and the temp at race time was probably high 50’s. Almost cold. I actually wore a jacket for the first time since April. Blue Shoes part 5,  Adidas adizero feathers,  were on for their maiden voyage.  Six ounces of neon blue and flourescent yellow awesomeness.

When I got to the race I felt some pressure, because I wanted to set a good time with the ideal conditions, plus win one of the coveted glasses. I quickly saw that it was going to take a miracle to do this. The race, though fairly small, brings out some tough competition due to the nice cash prizes for the overall winners. Plus, it was so nice this year I think the attendance was up.  I saw Steven Johnson and Randy Finn, two Strictly sponsored runners that can go sub 18, in addition to Code Brown, who has regained his previous form and usually still crushes me. Will Brumbach and Meg Weis were there as well, so I thought even a top 10 overall would be a stretch. The 35-39 age group in this town is just ridiculous,  crazy competitive. I’ve had several races where I’ve gotten more open (overall) Tour de Columbia points than age group points.  In addition to the regulars, there always seems to be some joker coming out of the woodwork who can go out and crush a sub 19 on a whim.  So, I worked myself into a negative funk with all my Bitter Bob self talk , which you can see I’m really good at.  Warmed up 2 miles with Burgess and the Code on the course. There isnt much to say about this course,  basically a rectangle in Shandon with a few rolling small hills. There is a nasty half mile loop at the very end where you see the finish clock  but have to head back out again. USATF certified.

The start felt super fast with all the competition, but I think the weather had everyone feeling good and wanting to push it. The feathers felt really good, and the legs were cooperating, which was something I feared wouldnt happen with the torture I put them through with the Blue Ridge Relay last week.  Eric Ashton and Randy Finn took off with what had to be low 5 pace and quickly separated themselves from the field.  A small pack formed ahead with the Code , Kathryn Ashton , Meg and a couple others that I didnt recognize. I was initially running with Will Brumbach and Michael Ullford, who usually finish near me in 5ks. It felt like I was flying and I eventually drew even with Meg and another guy (John). Thought I was laying down almost a six flat split, but apparently I was having delusions of grandeur because Garmin read out a 6:19 at mile 1. After the first mile there was a turn on Queen St and we started to head back towards the finish on Heyward after a couple of blocks. I was locked into a tight pack with Meg and John at this point, absolutely stride-for-stride, no one wanting to fade. I actually had to do some maneuvering to run the tangents and drafted a bit on the other two for awhile. Hit the second mile at 6:15. I saw the house that I had mentally marked 1 mile from the finish soon after, and tried to really push it. I had been feeling good until then, but it was time to bring the Dr Pain. I took the opportunity at the next hill to surge and separate myself from my mini-pack.  Made the turn on to Bonham St and saw the finish clock in the mid 17’s, so I knew I had to burn it to beat last years time (19:40). Going back away from the finish sucked, compounded by the fact I had misremembered the course and saw the turnaround on this loop was actually one block further. This also meant my landmarks for the blue shoes kick were off, but at this point I guess it didnt matter, because I was hurting big time. Once heading back to the finish I knew it wasnt much more than a quarter mile, so I pushed the pedal to the floor, trying not to fall into scalded chicken form. I was also deathly afraid of getting roadkilled by either one of the two behind me.  I saw Ken Sekley had faded a bit from the pack ahead and I tried to catch him, but there was not enough time or oxygen molecules in Sims Park available for me to do it. Mile 3  in 6:12, though I was too gassed to even look.  Turned the last little corner with the clock turning to 19:30 and finished right around 19:35. Pretty happy with the time, though it felt faster.  Garmin had 3.15 miles, though this is a certified course.

Ran a cooldown with the Code and Burgess after I stopped breathing like a jackrabbit on cocaine. I was thrilled to learn that the Code had finished 3rd overall.  Having a friend run an awesome time (18:48 I think) and place overall is great, but this, compounded with fellow age grouper Randy Finn finishing 2nd, meant there was a chance for a glass for me.  Apparently I think the entire universe revolves around myself.  Sure enough, some guy I’ve never seen before actually beat Steven, but I was able to squeak out a 3rd place and take home my precious glass. One measly TDC point though.

K. Ashton, Meg and Sarah Blackwell won the overall women. Sekley took masters male, and Greta Dobe, reveling in the absence of her friend Tigs, took home masters female and 50 bucks. Burgess was crying about his 20:30 but still easily got an age group glass as well.  I told him the day before he might have to do twenty 400s on our next interval session if he didnt sub 20 with such great conditions. I guess he’ll find out on Tuesday.