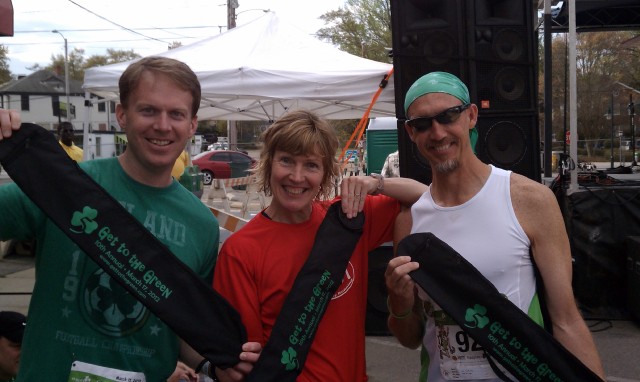 The Get to the Green is the ever expanding 5k associated with the St Patty’s Day festival in Five Points. This is the 10th anniversary of the race, and I see they originally had less than 300 participants in 2003. This year they had over 1800, and were billing themselves as the biggest road race in the Midlands.

This is my fourth year doing the race, and I decided to run it fairly last minute, since the Columbia marathon was a bust for me. The 37.50 was the most I’ve paid for a 5k in a long time, but at least you get a pint glass with the entry. It also included the $15 St Patty’s fest fee, so I guess it was a good deal is you went to the festival.

I considered not running the race though, because I’m not a big fan of huge races. As mentioned before, I usually seek out the smallest mom and pop events, because 1) Possible overall glory with potential trophy action! and 2) Considerably less stroller dodging. This race in particular has a bottleneck less than a quarter mile from the start, so unless you are up at the front there’s going to be serious traffic. On the other hand, the first few rows are going to be subject to a total stampede.

Last week’s illness decided to extend into the first half of this week too, so I had no idea how this race was going to turn out. My last speedwork was over 3 weeks ago , and everything had been pretty easy since, so I knew 5k race pace was going to be a smack in the face.

Got there about an hour early, did a mile warmup with Spencer and Greg. Felt kind of rough – humidity was high, temps were already high 60’s, and pollen was everywhere. Got to the start and there were noticeably less elite types there, maybe an aftereffect of the marathon last week? The Ashtons, Allerses, John Charlton, Alejandro Arreola, Drew Soltau, Frank Clark , Drew Williams and Kenzie Riddle made sure there was still no shortage of fast. I had to line up right behind these guys to assure I wouldnt get caught up in the impending quarter mile cluster. I was standing next to Greg, who I hoped to use as a pacer, and Will Brumbach was talking about pacing off me, though I told him this may not be a good idea today.

The start was delayed several minutes – I think they were still registering people at the last second. Finally Ben Tanner got the race going, and the start was crazy. I went out pretty hard but there were still people dodging me, then me returning the favor. After the bottleneck area (festival gates jut out into the road), I tried to keep up a strong pace, but this is where you begin a long climb from Five Points all the way to Hand Middle, more than half a mile. At the top of the first hill I was laboring pretty hard, and by the school I was really slowing. Greg and Spencer had left me for dead, and Will Brumbach, Whitney Keen and Amanda Charlton were a good bit ahead of me as well.  I usually use people I know as a gauge of pace, but this was hard with so many other people in the mix. I hit mile 1 at 6:26, one of my slowest first miles in a long time (25 sec slower than my last at Judicata). Started panicking because I felt pretty terrible despite the pace. Wanted to pick it up, but wasnt much there. My only solace was the fact the rest of the course was pretty flat. Mile 2 was through Shandon, using Duncan St, which has to be the common street for about 10 races since I know it like the back of my hand. A nice surprise was the turnaround, as it was a lot closer than I had thought. I think I finally acclimated to 5k race pace by the time I hit the Ott St turn back towards Devine, since I began to actually get some oxygen back in my lungs. It was also great to see Ken Lowden and company manning a water stop/inspiration station, and Teo going nuts. I looked down and saw a 6:21 split, so it was going to be tough to even get sub 20 at this point. Passed Whitney just before the 2 mile mark.  I hit Devine St and the Code comes blasting out of nowhere and starts verbally whipping me like Seabiscuit on the home stretch. So I kicked it in, hard…and probably way to early. The finish line is visible from a long, long way out, and this just sucks you in. I was going faster though – the field started rolling back towards me. I was able to pass Will,  Amanda and Greg, and Code kept giving me new targets. But i was dying..big time. Praying for that finish line that kept seeming farther. Wanted to crawl into the fetal position and die a sweet death.  By the time I hit mile 3 I was starting to worry about about falling off that fine line between pushing it and puking. Damn that Code. Finally made out the clock switch to 19’s , but really couldn’t muster a finishing blast. Crossed just under 19:30.

Not one of my best times but could of been much slower. After the race I finally looked at mile 3 and saw a 6:02. Code said he was trying to keep me under six. Finished in 33rd place, which is pretty good for me in this race. Ended up 5th in age group, won a “tubular cooler” for placing (they went 5 deep this year).  Official chip was 19:28.  Eric Ashton won overall 30 sec clear of the field in 15:47, and John Charlton completed the masters domination with a 3rd place 16:46. Second was Jonathan Eggert, whom I’ve actually never seen race before. Jourdain apprentices Frank Clark and Drew Soltau had strong races, finishing together in 18:09 and 18:17 respectively. Eric Allers and Drew Wiliams were just behind them in 18:21 and 18:25. The women’s race was super close with Ashley Evens beating out Kathryn Ashton by just a few seconds (18:30 -18:37) Kenzie Riddle finished a close third in 18:47. Brian Kistner, who finished 2nd in the marathon, came back and ran a sub 19. Nice. Spence continued his sub 19 streak with an 18:54.  Heather Brumbach, Will’s wife,  continued a comeback to racing and beat me at 19:15.  Amanda, Greg and Will all easily went sub 20 as well.  Whitney ran a strong race but just missed his sub 20 by four seconds – ouch. Other local age group winners were Rocky Soderberg, Henry Holt, Patti Lowden, Alex Ponamarev, Cheryl Outlaw, Mike Wainscott, Pete O’Boyle, Ken Sekley, Jeff Burgess, Shannon Iriel, Ken Cobb, Theresa Penney and Erin Howie. Tigs won her age group too, even though she was “just out for a jog”. Wish I could do that.