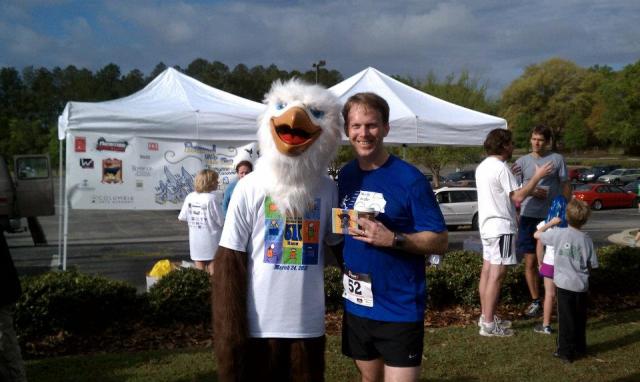 This is the second year of the Rosewood Eagles 5k, which is held to support Rosewood Elementary. Last year this race fit the Blue Shoes standards for trophy hunting – a first year race with limited publicity and competition from other races. Sure enough, the stars aligned and I was able to score a 3rd place overall. They had great awards, and my framed art from one of the Rosewood kids was probably my favorite piece of race bling last year.

This year the race was more publicized, and being a second year event was more well known to the running community. Still, March 24th appeared to be a day every race director in the city decided to have a race. Columbia is pretty unusual for a small city in that there’s basically a race every weekend. However, the 24th had no less than 5 races in the area. Lexington had the Colon cancer 8k, Swansea had the Special Olympics 5k (the one which Trophy won in 2010 and earned him his nickname), Riverfront park had “Where the Wild Things Run 5k”, Columbia High had the Healthy Capital 5k and Rosewood had this one. I had decided a while back to do Rosewood again because of my experience there last year, though some part of me wanted to go trophy hunting. My best guess would have been the Swansea race, given it was the most rural and not on any race series.

Showed up about an hour early and got in 2 warmup miles with the Code and Ted. Last year the Code was all psyched to win the race until Angel showed up last minute and crushed his hopes. This year Angel was there early and John Charlton was there, which completely wiped out anyone else thinking they would take this race. I was already sitting 3rd in my age group (behind Angel and the Code) even before the start, so my overall chances were definitely done. Eric Allers showed up with Tigs a little later (on their wedding day no less) , so it was doubtful Code could repeat his 2nd overall performance last year either.  Tigs and Amanda were the main competition on the women’s side.

Although this course is not certified, I do remember it being pretty accurate by Garmin at least. It has a 2 loop configuration – one big loop that is about 2 miles, then a smaller loop that shares part of the bigger loop but shortcuts back to the start/finish area. First mile is mostly downhill, 2nd is almost all uphill and the third rolls up, down then up again. Temps were warm, probably mid 60’s, and humid – not the best.

The start was fairly calm given the small size of the race. There was an immediate separation of John and Angel, then Code and Eric in a 2 person mini pack, then myself, Amanda and another guy . This other guy passed me about a half mile in, but I made sure he didnt get too far ahead.  My paranoid age group radar told me this  dude was probably one of those random sub 20 5k suburban 35-39 dads that just pop out of nowhere. After an initial bump, the course turned downhill for a half mile stretch. Amanda and I kept passing each other for most of the first mile, and we hit the marker a shade under 6 minutes, though my Garmin had the mile a little further at 6:07. I felt pretty good at this point, so I thought I would try to hold this pace as long as I could.  However, the second mile of this race just sucks. You take a right onto the road parallel to Owens Field airport, which you would suspect would be flat, but is actually a very long slight incline. I passed unknown guy but I started to hurt a little in this long slog out in the open. I could hear Amanda drafting behind me, which was probably a good plan for her since she’s half my size. Mile 2 ends in a right turn with a nastier incline. I felt I had maintained my pace pretty well, but I forgot to check my Garmin at the mile marker due to the kids cheering at this point. It should be noted that this assumption of constant pace turned out to be very, very wrong. Mile 3 continued with an even steeper hill, which felt like a kick in the stomach. Form went all to hell and it felt like I limped over the top. The second loop shares the half mile downhill of the first loop, and I was able to get the whole oxygen exchange thing working again. Picked up the pace here and I could see the Code and Eric starting to get reeled in a little. I was actually fairly close to the Code at the bottom of the downhill, but then the course turns right back up an incline and that pretty much neutralized the emerging blue shoes kick. I could tell Code was hurting, but he was just out of reach. As I crested the hill I expected to see some 18’s on the clock but was shocked to see 19:20’s. Here I was thinking I’m a total badass for most of the last mile, and just a shade behind two 18 min 5kers, and now I’m already slower than my less than great race last week. I mustered a mini kick over the crest of the hill and was just toast after crossing the line at 19:39. 5th overall,  2nd in age group (Angel took 2nd overall and took himself out of the AG). I immediately checked the Garmin to figure out what went on. Course was 3.10 miles, so not long. On further inspection, my mile 2, which I thought might have been 6:10, was actually 6:36.  Nice pacing by feel, hero.

John Charlton won easily in 16:41, Angel took 2nd in 18:18, while Eric and Code finished quite a bit off their usual times in 19:15 and 19:30 respectively. Amanda took 1st overall female in 20:03, which is relatively slow for her as well. Tigs is still in recovery mode and way less than 100 percent, but still managed 2nd overall. Sure enough the unknown guy (Kevin Croxton) was 35 and finished just over 20 minutes. Burgess and Ted both won their age group, along with Alex P and Rocky. 79 finishers. I think the warmth, humidity and that hillacious mile 2 contributed to the slower times . I ran 19:21 in 2011, but it was probably 20 degrees colder.

Got a sweet pic of me with the Rosewood Eagle after the race.  Almost as good as my classic Chick-Fil-A cow shot from the 2009 Going the Extra Mile: 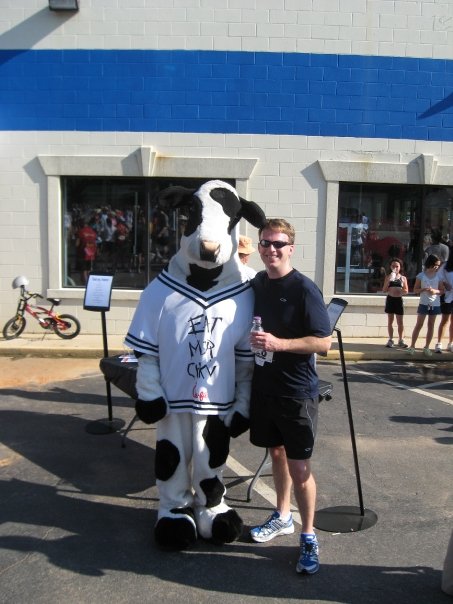