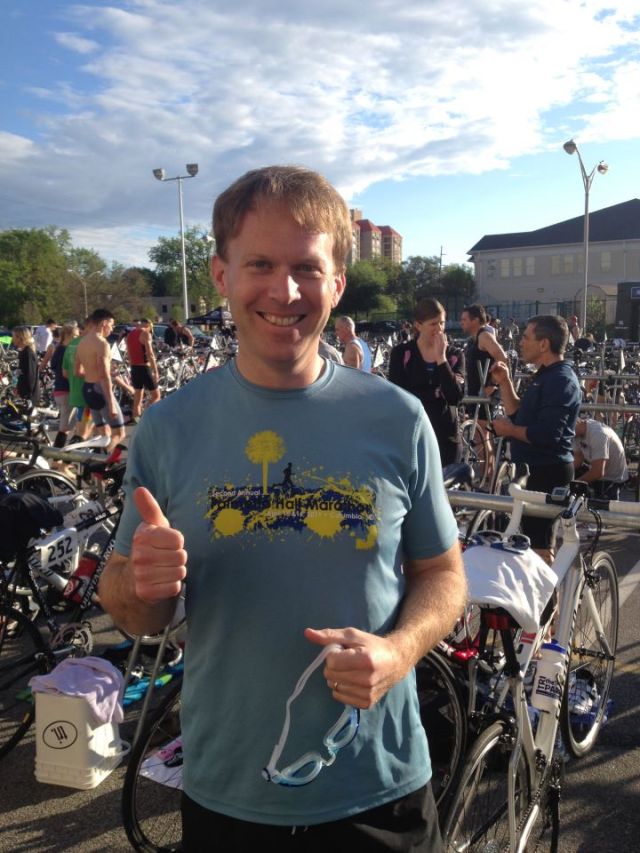 At the Columbia Marathon a few weeks ago, a woman standing next to me handed me a flyer for this race, the Columbia Downtown Triathlon. I initially disregarded it, because I’m strictly a runner. I used to bike and swim a lot as a kid and teenager, but nothing competitive. I hadnt ridden a bike in years, and I dont think I’ve ever really swam more than a few laps. Still, as I was holding on to this flyer, I thought – why not give this a try? The people I know who do tris absolutely love them, and I’ve always watched Ironman:Hawaii growing up. It looks like a lot of fun, and hey, I’m in good shape and surely could at least respectably complete the swim/bike of this event, since its a sprint distance (500 meter swim/ 10 mile bike/ 5k run). Right?? I’ll get back to that. One problem was that I don’t actually own a bike, but William Schmitz gladly loaned me his mountain bike. I made the plunge a week later and signed up.

Schmitz had me do a brick workout the weekend before the race and get acclimated to the bike and run course. Wasn’t too bad, though we were definitely doing a leisurely pace. The bike course basically encircles the USC campus, starting at Blatt, going up main to green to pickens, then plunging down Mt Gervais from the Columbia Marathon and into 5 points on Harden. Right on Blossom and then back to the PE Center. You do this 3 times to equal 10 miles.

Schmitz told me to get in the pool sometime that week and do a few swim workouts, but smart guy here decided to just completely wing it. I did sign up for a pretty slow swim time that put me 255th out of 276 in the swim order.

Another less than smart move was running the Rosewood 5kthe day before, but apparently my athletic grandiosity knows no bounds. Greg and Laura did give me some useful advice at Tigs wedding Sat night, and they agreed to help me with the prep/transition area the next day – which was awesome.

I woke up this morning pretty scared but excited. I had to go over logistics of the race a hundred times in my head, because I was deathly afraid I would forget something. I got there about an hour and a half early, and was immediately intimidated. These tri guys/girls were hardcore. People were milling about in spandex tri suits, hauling in their very expensive looking carbon fiber bikes and carrying all kinds of gear that I was completely clueless about. Almost everybody was pretty ripped, even my fellow novices in the back of the pack transition area. I struggled just to figure out how to reassemble the brake mechanism on my front tire – Schmitz showed me how but now I was freaking out about making sure it was right and working. One does not want to hit 30-40 mph on Gervais and not be able to brake.  Luckily Greg came later and fixed it so the front wheel actually moved freely. The last thing I needed was anything making me slower.

PART I – THE SWIM

I finally made it into the natatorium for the swim. I was almost at the back of a very long line, where people started the swim 10 seconds at a time. I had to wait what seemed like forever, stewing in my anxiety, watching basically the entire field start ahead of me. Some of these guys definitely fudged their  swim times – I saw a lot of people stopping and walking, and I was half worried I’d get stuck behind a whole pack of people. Turns out this was not a problem. Swim course was just 10 lengths of the Olympic sized pool, swum in a snake like pattern. Finally I got my chance and dove in. First 50 meters was great, though it did seem longer than I imagined. I got passed right off the bat on the second lap by the girl behind me, but hey, I was pacing myself, right? First sign of trouble was literally less than 100 meters into the race. This was getting WAY tougher REALLY fast. Apparently working your upper body in the gym means exactly jack squat in the pool. Third lap in and I’m getting passed like I’m standing still. The sheer magnitude of my suckage has begun to overwhelm me. I soon discover the pool has an 8 foot deep end, but gets  6 feet and shallower about half way.  I’ve resigned myself at lap 5 that I’m going to have to do some pool walking to get through this. My arms have turned into useless spaghetti like appendages. Google “Roby” from Yo Gabba Gabba and you have a basic idea. I start doing little pool walking jaunts in the shallow end, but feel obligated to move my arms like I’m swimming, as to avoid any unknown penalty. I don’t think I’m fooling anyone with my synchronized swimming routine .  I dont remember much about the last few laps. I did manage to pass the 82 year old with the snorkel, but even he looked like a stronger swimmer than me. A middle school girl passed me near the end, but by this time my ego was so completely out the window that it couldnt get any lower. The fastest pace may have been the last 25 meters, because I was so desperate for the torture to end.  I had a hard time even lifting myself out of the water. 16:

As if my shame wasnt already complete, I realized that all that futile kicking in the pool had also turned my LEGS into quivering jello too. I tried to jog to T1 but I think it was a modified shuffle. I was already toast. I got to my bike and toweled off a bit, though Wes was already harassing me about this being a race or something. I was trying to maintain some semblance of urgency, but the  damn spaghetti arms made it tough just to tie my shoe. I finally jumped on the bike and of course the first part is straight up a hill. I’m actually feeling slightly better though, because I’m not having to employ my useless upper extremities. I grabbed my Garmin, but now realize I lack the coordination to put it on, so I just hold it against the handlebars. I’m thinking I’m going up the hill at a decent pace, but I’m soon being passed left and right by everybody. It doesnt help the gears cant seem to lock in and im pedaling about 1000 rpm to go like 10 mph. I realize near Sumter st I havent actually started the Garmin, so I push it here. I struggle a little until finally I get to Gervais and get to fly down the hill. I’m still getting passed, though. I hit the second loop and get a boost from the fam and friends but its getting harder this time. I do manage to pass one other guy when he actually gets off his bike and walks the hill. People are getting sparser by this time, but a group still passes me on the hill. A woman asks me which team I’m on, and then if I’m racing? Between my neon shirt , mountain bike and overall slowness, I think she thought I might be a race marshal or something? I give her a “yes, I’m racing, thanks for that”. Another struggle but then reprieve on Gervais. Third time its looking like a ghost town out there. I’m actually hoping the police dont open the course to traffic, thinking no one could be this slow. I pass one dude really struggling on the hill, but then ride the rest of the loop completely alone. I figure I must be almost last.

I finally finish lap 3 and I am wiped out. When I dismount the bike I’m just hit with some epic glute and hamstring soreness, like two king cobras jumped up and bit me in the ass simultaneously. I dont even bother to rack the bike, which Greg luckily does for me afterward to avoid the penalty. I do manage to take my helmet off and strap my number on but forget my hat. The start of the run is just brutal…so sore. Plus zero energy, so my race pace coming out of T2 is maybe 8 minutes/mile. What’s worse is having to run up that damn hill I just biked up 3 times. The course goes over the USC footbridges near Strom, out to the convention center, then back to Blatt, out to Bates West and a turn back to the field just below Blatt for the finish.  There’s no one in sight except for a steady stream of people coming back to the finish, and tons of people walking around, obviously already done.  As I head out on the course, I see a lot of people with higher numbers than me already heading back.  Some people are walking…but still a mile ahead of me. I personally feel like I’m crawling but jello legs are still not responding. Can’t believe my first mile is actually sub 8, 7:57. Finally, at the turnaround, some of the soreness starts to abate, and I’m able to pick up the pace on the ensuing downhill. To this point I havent seen a soul on my path, but suddenly I catch up to a bunch of people and start passing. Hey, I found something I’m actually good at! Yay for me. Hit mile 2 in 7:15, and looping back near the finish makes me really pick up the pace. Actually manage a 6:30 pace for the last 0.8 miles to save a shred of self respect, though being announced as the president of the Columbia Running Club and finishing near last is a little rough. At least Rudnicki told people it was my first tri. Finished the 2.8 miles in 20:23 officially. 174th male out of 196, 1:19:56 overall. Was 191st in the swim, 185th in the bike and 66th in the run.

Wow. All I can say is that I’ve gained a huge amount of respect for triathletes. This was just a sprint distance and I felt better after the marathon in Jacksonville. Major thanks to William for lending me the bike and the Howells for helping me with the logistics. Good to see the support of Jennifer Reeves, Wes Spratt and Katie Hines out there. Derek Gomez rocked 11th place and took home 2nd in his age group. Team Spaghettios/Hudgins finished 5th in the relay and way ahead of me.

Many thanks to Laura and Greg for taking the pics below: