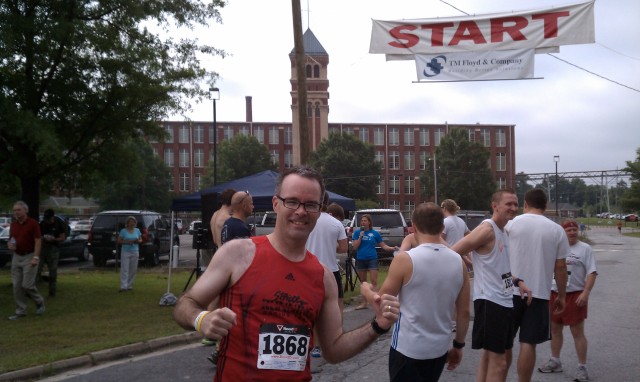 The Quarry Crusher is a new event that is being run in conjunction with the Olympia Fest in the Olympia – Granby Mills neighborhood out near Williams-Brice.  I impulsively signed up for this race about a week ago .  I had  gotten an email about it and read the article the State published, so I figured it would be a unique and cool race. They normally dont allow the public in the quarry, so I my only awareness it existed was from google maps satelite pics of the city. My father-in-law also grew up in the area, so I figured it would also be a good excuse to walk around the neighborhood. And….there was also a minor degree of Trophy Hunting involved.

OK, so one thing I noticed about this race’s website is that it is vague about the course. It makes reference to running down in the quarry and then a steep rise out at the end. They mention things like a few hundred feet in elevation change, but its hard to truly envision the course from the description. They actually have a video of this girl Merritt running in the quarry, and basically it looks like a piece of cake.  Somehow I got it into my head that it was basically a long gradual decline and then a short but steep rise right before the end.

I got there about an hour early and immediately saw Mike Hedgecock, so there went the trophy. Ran about 2 miles in warmup with him and Thunder Dan Bliesner. We ran up to the quarry entrance which was being blocked by 2 Vulcan Materials workers.  I began wondering what was so ridiculously secret about a big hole in the ground. Pretty good crowd at the start line, though they put a strict 200 person limit on the race. In addition to Dan and Hedgecock, Greta Dobe was there to double up, having just finished the Heart and Sole. Scott Hodukavich, Fred Mullen and Adam Beam were also in attendance.  Oddly enough, one of the guys from the Island Liqours team from the Palmetto 200 drove up from Charleston to run this. Dan and I can’t get away from these guys.

With the starting gun, I blast out of the gate like a regular 5k and find myself all alone in first for the initial quarter mile. I decide eventually this is probably not the best strategy and ease up a bit. Dan, Hedgecock and Island Liquors run up beside me and I let them form a small pack right in front of me. The first half mile is nice flat roads, and I’m feeling pretty good. But the quarry looms ominously ahead. We blast through the gate area and head down a short decline, then another steeper one. Not too bad.  Knowing the start line is also the finish line has me a little worried though…I wonder if I’ll have to run up this again…HOLY ^&^$!! 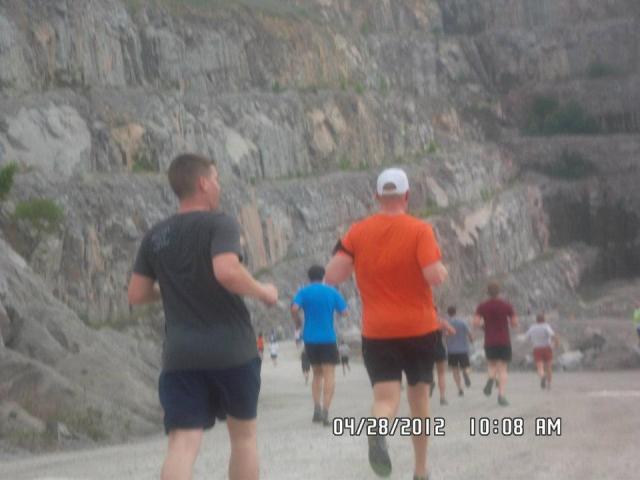 Suddenly we make the turn and see the above. And now I’m flopping around and trying not to destroy my knees and quads. Total freefall. I’m actually more concerned with keeping my footing then trying to maintain my speed. Apparently Bliesner and Hedgecock are better than me at downhills, and are gapping me pretty badly despite I weigh as much as both of them combined. Some other jokers pass me as well, but I’m already in panic mode about this course. As far as I can tell there is no way out but right back up. I hit mile 1 at about 5:57, though I actually spent the second half of the mile trying to slow down some to save myself. But there’s none of that to be had. My legs are taking a beating, like a couple of sledgehammers to my quads. After slowing down the pace a bit I feel a little better, and figure this may set up perfectly for me, since I’m good at powering up the hills and maybe the guys in front of me went out too fast. Completely delusional. After a mile of plummeting to the center of the earth, we finally see a cone as the turnaround point. For the love of all that is holy, do we really have to run straight back up this thing? Yep. I’m barely up the first curve upward and my legs are starting to protest. Sub 6 pace turns into 8+ really quick. And pretty soon 8 min pace is blazing because I am crawling. The momentum of every step is sucked up by gravel and sand, and if you dare look up you see this: 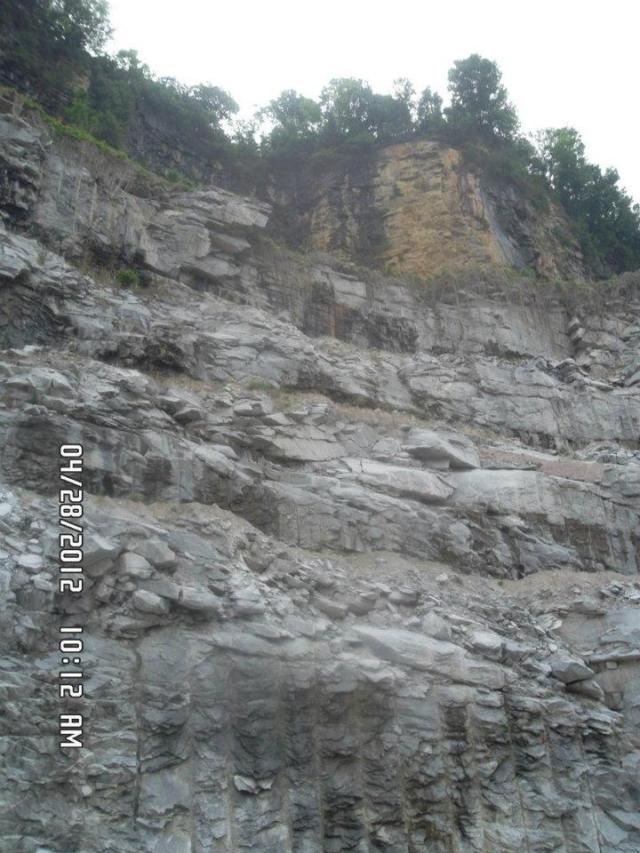 Not exactly a sight that gives you hope. Meanwhile I see Dan WALKING ahead. Oh, I’ve got him now…wait….I’m not gaining on him.  What was a crawl now feels like I’m jogging in place.  I keep trying to stand up tall but I keep hunching over like a 90 year old man. Finally I let out the first of many F bombs and just start power walking too, which seems unbelievable to me, but is actually more efficient than that death-jog I was attempting earlier. Usually when you walk you can expect to get passed, but soon I realize just about everyone is doing the same. Bunch of dudes pulling 5 something pace now look like a pack of soccer moms in the mall.  And the collective shame is palpable. Lots of ridiculous waddling to pass other guys going on. Really were all lucky the Heart and Sole women’s race was this morning, because I’m sure there would be a lot of chicking going on to otherwise add to our misery.  I’m doing short intervals of run/walking now.  The quarry run makes everyone a jeff galloway disciple, apparently. I cant even muster a jog for the picture area about 3/4 the way up.  Merritt, the girl from the preview video, flies by me in a golf cart in the middle of one of my walks of shame and gives me a “go blue shoes”. Damn her! That video is a fraud! Finally after a 10+ min mile and a seeming eternity, I reach the top. I can hear someone behind me but decide there’s no way in hell he’s going to pass me. Have I not had enough suffering for one day? Hitting the flat pavement is like heaven. I blast out a meager blue shoes kick and finish in 28:11 or so.  Not sure where I finished, probably around 10th.

Island Liqours ended up winning and apparently didnt even walk. Hedgecock ended up 2nd and won fifty bucks to boot. Thunder Dan finished 5th. Greta Dobe won her age group even with the double dip. They only went one deep in age groups and had certificates as awards, which is kind of lame.  I was hoping for some kind of rock as the award. Not like it mattered anyway, because I didnt win my age group – maybe second though? Hopefully they’ll have results up soon. This was a unique race and pretty cool, despite the painful slog back up out of the hole. It will apparently be back next year, where it will be even longer as they continue to dig in the ground. Bonus!

Quarry pics with timestamp are Scott Hodukovich’s. Also included are a few from The State.