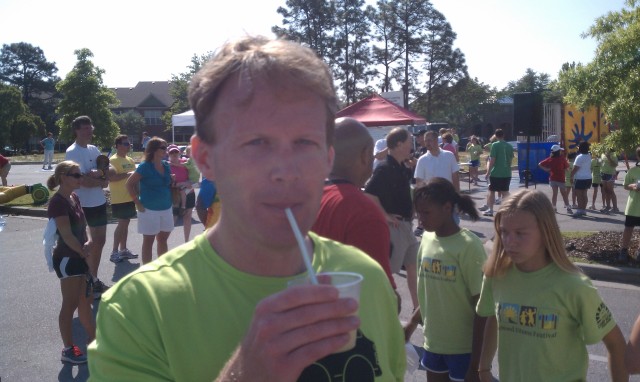 The Wildewood Fitness Festival is a first time event held just a half mile from my doorstep, with a hybrid (half trail/half roads) 15k and 4 mile trail race. Proceeds go to benefit Camp Kemo.

I was jacked the first time I heard about this race a few months ago. I’ve been waiting to do a 15k ever since they stopped holding the Labor Day 15k out at Columbia International in 2009. That race was actually my first non-5k, and I jogged about 75 percent of it (being scared to death of the longer distance) en route to  a 1:16.  This remains my PR since it was the only time I got to do that particular distance. So I was glad to have an opportunity to finally race the 15k again and take down this old mark. The bonus was the course, which I knew like the back of my hand, as all of it was on my usual training routes.

That being said, I also knew the course to be a real challenge. Total hillfest.

I got to the race actually a little later than usual, despite having a 60 second drive to the start line. Met up with the Code, Burgess, J-Lybrand and Charley and did a mile warm up. One thing immediately evident was that it was freaking hot. And humid. Felt like I was running in a Snuggie. Plus my legs were already protesting. I decided to run some on Friday, which I usually completely take off, and then I couldnt resist taking Anton’s bike (which I’m planning to buy) for a spin that evening. Dumb move.  I think my legs may have been in some PTSD mode, still fearing I was going to spontaneously enter a Tri again, now that I was cycling. Anyway you look at it, I was not feeling it. But sometimes I feel that way and end up having a good race once I get going, so all was not lost….right?

Not so much. There was a decent crowd at the start, lots of familiar faces. Big dogs Plexico, OJ Striggles, Frank “Dr. Chicago” Clark , Jeremy Becraft and Shawanna White were all toeing the line. A couple from Try Sports, who I think I remember from either the blue ridge or palmetto 200 relay, were there from out of town. Yerger, Burgess, J-Reeves, Wes Spratt, Code, J-Lybrand, the Outlaws + Gizmo, Coleen Strasburger, Ken Cobb, Charley + Winston, Team Griffin, Shufy Rowe, and Paige Tyler were just some of the regular racers in attendance.

My plan in this race was to run at half marathon pace and see if I could pick it up late. This would equate to 6:50ish. Multiple choice time…. 1) My last half marathon was a) my PR b) on a pool table flat road course in Charleston c) held in 35 degree temps with zero humidity or d) all of the above. If you guessed D , then you are the lucky winner. Question 2. This race is a) half trail b) a cluster of hills c) 70+ degrees and 90 percent humidity or d) all of the above. You get the picture. But at least its 6k shorter.

The start of this race seemed fairly leisurely, though the heat was already , as I mentioned, snuggie-esque. I settled in just behind the Code , next to Burgess, with Charley and his dog Winston just behind.  Polo Rd was pretty flat , and as you enter Sesqui for the trail section, downhill. Hit the first mile right at 6:50, so about where I wanted to be according to plan. What was not planned was the fact I already felt like death. Legs just felt tired and dead, and I was breathing way harder than I should have. I was a) really starting to hate my decision to both run and bike on the day before the race and b) cursing my decision not to trophy hunt and go for the 4 miler. Mile 2 in 7:15 , so already slowing. Then came the climb back out of the park. Fun stuff. Whats a hill without sand to completely suck any of your momentum? 1.5 miles later and I was sucking WAY too much wind this early. But at least the incline was ending and we were headed out of Sesqui. Burgess, who had been at my side the whole way, seemed to be feeling a lot better than me. He thought I was going to drop him once we hit the roads. Not going to happen. I’m pretty sure we must of taken about 3 months running in Sesqui, because the second we came out of the park it felt like August. The sun had come out with a vengeance, and there was zero breeze. Burgess and I both got chicked by a woman doing the 4 miler kicking it in to the finish, and we then had to suffer the cruelty of passing by the finish line and head out into Wildewood for another 5.3 miles. Mallet Hill Road, the main road of Wildewood, is completely exposed near Polo, and suddenly any life spirit left my body. Pace began to suffer immediately and Burgess started to drop me. Apparently I wasnt the only one hurting because all of a sudden I see Code standing on the side of the road. He decides to start running again when he sees me and Burgess, and says he’s going to turn around in a mile. He probably would have, but as we turn into the neighborhood I’m pretty much pulling 8 min pace, and he’s dropping me too. Now speed is always relative, and for some eight minute pace is fast, just as Plexico probably runs my 5k Pr pace on an easy day. But 8 min pace is basically my Sunday long run. For me to have a bib on, and ostensibly in a race, its almost too much to bear.  One of the streets is Lame Horse Rd. and I’m thinking someone has a very cruel sense of humor.On the very limited bright side, at least no one is passing me. Apparently the heat and hills are taking their toll on everyone.

Burgess, Code and I are in a straight line by mile 5 when there’s a turn earlier than the course map had drawn out (at upper pond instead of old still), and I’m wondering (perhaps praying?) of there’s been a misdirect cutting off some of the distance. We hit mile 6 right in line with the marker, so my next thought is they have altered the course somewhat.  The next section of the course is a killer, as I remember from the map. Running Fox Rd has a long brutal incline with a steep decline on the other side. On the map, you turn at the top of the hill before the steep decline onto another hill, Cricket HILL Rd. Except now I see Burgess going over the top as I’m slogging up this thing about 50 meters behind now.  Sure enough, theyve altered the course to make up the missed distance of the early turn – by having us plunge down the steep decline and COME RIGHT BACK UP IT. Must of been the same guy who designed quarry crusher. Oh yeah, and they kept the cricket hill part once you get back up to the top again. GOOD TIMES.  At least you can see where you are with the turnaround – there’s actually no one behind me except for Charley about 100 meters back and then a 40ish small woman who looks like she’s crushing it. I think she looked over at me and saw the fear in my eye.  The fear of getting master chicked. Thankfully cricket hill does eventually have a downslope and I try to let every bit of my oversized mass take a gravity ride. Mile 7 arrives and I look down to see a 7:50ish split, whcih I’m actually grateful for, given the way I’m feeling. Which is like complete hell, by the way.

Code is ahead of me, and occasionally I draw closer to him, but I think theboth of us are so shamed by our underachievement that were not even racing anymore. Burgess has completely exited the picture by now. Shortly after mile 8 is a sign “LAST HILL” which I know, by virtue of running in the area all the time, is complete BS. I somehow in a half delirious state, manage to waddle up that hill and the 2 or 3 other hills beyond that. As mile 9 passes and we approach the finish, Code looks back and yells for me to kick it in. I dont think either one of us to win this ridiculous battle, and it doesnt matter for me anyway, because I am completely and utterly done. Light is on and gauge is pegged on E. Somehow I do manage a feeble increase in speed in a desperate rush for the pain to end – 6:44 split in the last .30 after running the previous 5 miles just below 8 minute pace. I cross the line in 1:10:33, 20th place and 4th in AG. Still a new PR, I guess, even if its at my marathon PR pace. Somehow Code, who finished 5 seconds ahead of me, got 3rd in age group. Masters female (Jennifer Conrick), who actually is 2nd overall, finished 30 seconds behind me. Whew that was close.

OJ , Plex and Frank took the overall in this race, OJ with 5:57 pace, which is nuts with this course and conditions. Women’s winner, the tri sports girl (Michelle Hazelton), wins the female overall in less than an hour, which is damn impressive. 2nd place is Conrick, and Jennifer Lybrand took 3rd despite having a rough day as well. Yerger completely blasted this race, finishing 5th (4th overall male) and taking my age group a full 7 minutes ahead of me. Burgess won his age group at 1:08:52, and Mike Griffin, Coleen Strasburger, Sandy Smith, Shufy Rowe, both Outlaws, Wes Spratt, Frank Eichstadt, Paige Tyler, Ken Cobb, John Bradley and Colleen Vowles all placed in their age groups. Hedgecock took 2nd overall in the 4 mile;  Rocky Soderberg also won his age group.