The Jailbreak is in its seventh year , and I think this marks my fifth year running it. The race starts and ends at the Lexington County detention center and goes to benefit the Lexington County Sheriff’s Foundation. They always have tons of police out volunteering and Sheriff James Metts makes an appearance to give out awards.

For whatever reason, this race is insanely competitive. Yes, they give out prize money for the overall winners, but that does not explain the other 50 or so going sub 20. Last year a guy (Scott Wietecha) ran a 14:47 to win. Nuts. I finished 26th with like a 19:34 and barely got 3rd in AG. And that was a weak field for this race. I’m thinking this may be the goal race for a lot of people, since its the only event for Memorial Day weekend and its basically the last chance to race before Columbia begins its annual descent into hell…also known as  summer.

I was unsure of what I’d be capable of in this race. Last week I had an abysmal run at Red Bank but I was technically still recovering from being sick. I had put some good training in over the past couple of weeks and gave myself 2 days off before this race….an eternity in Blue Shoes time.

Although this race is usually on the warm side, they couldn’t have asked for better weather this year. Cool..very cool, like in the low-mid 50’s. In Columbia. In late May. For those of you that don’t live here, that’s practically an Arctic blast for this time of year.

Showed up 45 min early and already the place is crawling with some blazing fast peeps. Just driving in I see the SR elite ladies (Kenzie, Shannon, Erin) , Kathryn Cavanaugh, John Charlton  and David He. I did a warmup with the grandmaster beasts of SC, Billy Tisdale and Geary McAlister. Trophy and the Code are there, along with all the Diesels (even Roxie).  Ken Cobb and Angel showed up, further dimming my age group chances. Amy and her mom Valerie, along with Joyce, Sydney, Tracy Meyers, Travis Moran, Ken and Kenneth Vowles are all there for Team Utopia South. Other CRCers included Marie Demetriades, the Holts, Rocky, Birgit, Jeanna Moffett, and Ashley Horton. Meg Weis is back post baby and on the road to kicking my ass again. OJ Striggles, Eric Ashton , and Jason Dimery were some more people that would destroy me. The Plex was noticeably absent.

I actually line up a couple rows back at the start, because I’m standing in a sea of SC running legends, and I dont want to get trampled. Good thing I outweigh most of them by at least 30 pounds. Amy is standing next to me and nervously waiting for Justin to show up and guide her. For a few tense moments I thought I might have to step in but the “A standard” showed up with just a couple of minutes to spare. The start is nuts. People blasting out of the gate, dodging and pushing. Thankfully they have a start mat so you can have an accurate chip time.

The whole first mile I try to balance out the urge to crush it on the flat part of the course. I know the first mile and a half are basically flat to downhill, followed by some roll and then a gradual uphill last mile, which is pretty brutal if you’ve gassed yourself early on. See proof: 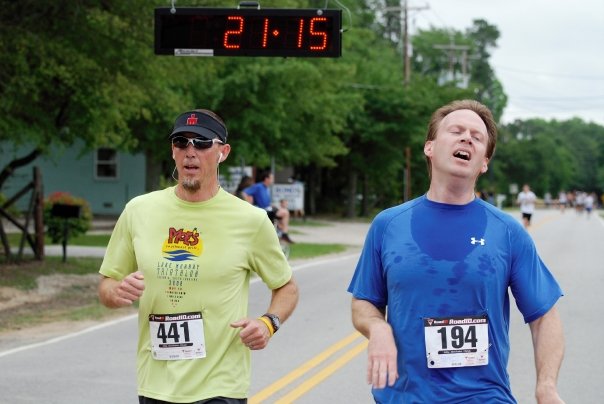 Yeah, that was Jailbreak ’09. That’s Greg Howell (who I didnt know at the time) looking all cool and smooth, and me looking like I just got shot in the back, or had a stroke, or both. Beautiful.

Anyway, I’m hating life because I’m used to being able to run without too much interference. But with all the competition, its like I’m in the middle of a huge pack, all doing about 6 flat pace too. I hit mile 1 at 6:03 by Garmin, though the actual time caller gave me about 6:10. There’s a long steady downhill after the mile mark and I admit, I got lazy. I figured I would let gravity take my sasquatch physique down the hill at a decent pace. But Howie passed me, then Erin Miller, then Shannon, maybe Billy too.  I havent slowed much, so these guys must be killing it. I latch on to this pack and try to keep Angel and the Code in sight. Cobb has already left the rest of the 35ers for dead. Its a battle for 3rd since OJ is on our age group and actually probably wont place overall in this monster field. I try not to panic because this course has played to my strengths in the past – hill climbing and finishing speed. One only need to look at the header to this blog to see the epic 2010 finish, leaving poor Trophy in the dust, him wondering what could have been.

There’s a long incline after the water stop at 1.5 miles, which gives me an opportunity to power up the freak quads and break free of my pack. Some kid blue shoes me on the ensuing downhill. I’m always flopping around and doing all kinds of unnecessary braking on declines, like a semi in the truck lane. Finally we make a turn at the stop sign on Roberts street and its go time – a long steady incline to the finish with a flat stretch at the top. Somehow I’ve caught up with Amy and Justin, and I think for a second that I’m absolutely crushing it, but then I realize she must be having a bad day, since she’s fading. I pass them with just over a quarter mile to go, and Bishop tells me its 400 meters from the next stop sign. Of course he’s basically jogging and speaking in full sentences while I’m gasping for dear life. So I throw down as hard as I can once I pass the sign. Everybody starts getting reeled in as I step further into the pain cave, walking the thin line between puking, collapsing or both. I pass Angel with about 200 meters to go, though he had told me earlier he was just going to 10k pace this race. Hey, I’ll take it. Suddenly the Code comes into view. I had already given up on catching him, but now he’s so close. Its coming right down to the wire as the kick blasts into 4 minute pace..and BAM we basically cross the line together at 19:14. We should have held hands…orrr maybe not.  Actually I’m pretty sure he got me by a half step. But damned if I didnt blast through the finish sensors at mach 5 trying to catch him. At first I thought the moment was lost because Strictly’s pics didnt have the finish line, but then I found the facebook page of one Henry Dukes. The dude literally has about 2000 pics of the race. And I found this:

Damn you Scott Brewer! I pulled to the side a millisecond after this pic to avoid an epic collision, though it looks like Code still had the “win”, i.e. the oh so important battle for 30th place. I do like this pic because it looks like we’re beating both Angel and Eric Ashton in the background. Awesome. This was also a course PR for me, so that helped me feel better about missing a chance to blue shoe the Code. But wait…at the award ceremony, I’m literally focusing my camera on the Code as he starts to go up to pick up his 3rd in age group when they call out my name. The look on Code’s face is priceless. Oh wait, I got that one!

The results for this race are nuts. Forty seven people broke 20 minutes, 170 something were under 25. The winner was Robert Razick, who actually beat Eric Ashton. Robert blazed a 15:03 while Eric ran 15:12 and 93 percent age grade. Thats world class for 45 years old. Teenage prodigy and tri stud Tony Morales took 3rd in 15:41. The rest of the top 10 are guys that win most races they enter – Tim Jeffreys, Irv Batten (who ran a 16:42 at age 50. Holy crap.), OJ, Hunter Janus, Eddie Vergara, John Charlton and Jason Dimery. All beasts. David He broke 18 minutes for the first time and finished 13th. Kenzie Riddle had an incredible race, winning the women’s overall and PR’ing at 18:02. We finished Cold Winters Day together, so clearly she’s doing something I’m not. Probably has something to do with more talent and about 80 pounds. Paul Reardon finished just behind her. Kathryn Cavanaugh smoked an 18:18 and finished 2nd overall female. Ken Cobb finished in 18:38 and took 2nd in my AG, thankfully fully clothed this time. Kenneth Vowles came oh so close to getting sub 19 but finished in 19 flat. Serves him right for beating me. Travis Moran continued his streak of finishing just ahead of me with a 19:05. Erin Miller crushed a 19:27 and beat Amy by a second. I think thats a PR for her as well. Shannon definitely got a PR at 19:46 and won female masters. Billy Tisdale finished just ahead of her , edging out Howie for the grandmasters win. Geary took 3rd GM. Ken Vowles had a huge PR with a 20:13, and Birgit also had a personal best with a 20:18 , 2nd masters. Jeanna Moffett, Mary Howk and Tracy Meyers took the female grandmasters overall.

In the age groups, teenage racing machines Parker Roof and Marie Demetriades each placed in the 11-13. Sydney Frontz took 2nd in the 20-24 in a good day for Team Utopia South. Ashley Horton took 3rd in the 25-29 while James Hicks placed 2nd in one of his last 30-34 races. Good luck in the age group from hell, James. Newest CRC member Amber Todd took 3rd in the 30-34. Meg is only a few months post baby and is already age grouping, placing 3rd in the 35-39. Joyce Welch actually made it out of the portapotty on time this race and won the 40-44. Ty Thomas threatened the Trophy (20:41) but still took 3rd in the 45-49. Strong work, Trophy. Thomas Tapp took 2nd in the 50-54, while Sandy Smith finished third the same age group. Valerie Selby rocked another sub 29 en route to a 3rd in AG, while Lynn Grimes easily captured first in the 60-64. In the mens 60-64, the Squirrel Fred Mullen took 1st, while Ponamarev took 3rd. Peter Mugglestone took 1st in the 65-59, while Margaret Holt won the female division. Arnold Floyd crushed the 70+ division with Rocky finishing 3rd.

Not many races coming up, but beware July 4th when team Trophy Hunting (Blue Shoes/Trophy) makes another go of it in the 2×2 mile relay at Born in the USA. Our goal: take down team K-Vowles. Better ramp up the speed, Trophy.