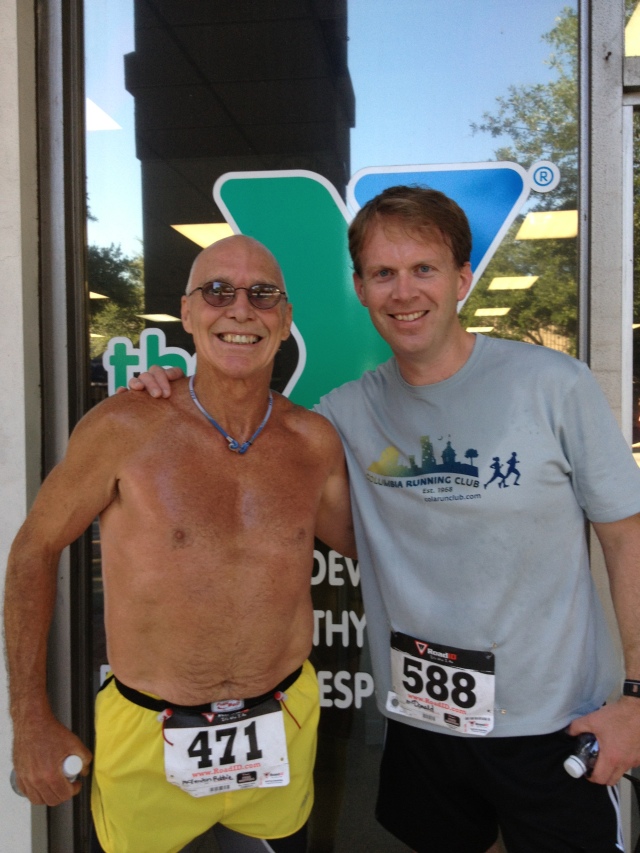 OK so this post is a little late, because I feel a little shame for falling off the wagon. I ran 10 hard miles on Friday morning and even went to see “Man of Steel” with the wife and kids until 9:30 pm. I was all set to run with the 621 ninjas the next morning when the addiction struck at 10 pm and I was back on the computer, looking for any race I could find. I scoured my usual sources and came up empty until I checked out the last bookmark I’ve added, Carolina Running Company. And there it was…the Lickety Split. Its in Hartsville, which just barely makes my one hour drive limit, but is actually a race Ive done before in 2011. This is in the dark period of the Blue Shoes, a 6 month era after my 2010 Richmond Marathon implosion that was the veritable Middle Ages for my blog. They had race day registration – so I was in.

This is actually a really well done race. Its put on by the YMCA there and features a well marked, if challenging, course with timely awards and nice facilities (the Y itself). Its also OG country, and I swear everybody in Lee county knows Robbie. A local celebrity. Masters beast Paul Reardon also calls Hartsville home.

Hartsville is surprisingly cool. Its at least 20 minutes from 1-20 and pretty far from both Florence and Columbia, but its about the hippest rural town I’ve ever come across. There’s a quirky coffee shop, thai food and a spa in just the small area I went through. They also have Coker College and the  Gov School for the Arts. Pretty interesting place.

This course is tough though. Somehow theyve found every hill or incline in Lee County. You essentially run past Coker, down a long decline, followed by some rolling hills. This culminates in a brutal climb back up right at the 2 mile mark, with an essentially flat finish. Did I mention its in mid June in South Carolina? Its not going to be cold, either.

I meant to show up an hour early but the trip took longer than I thought. You have to go through Bishopville and metropolises like Lydia and Cypress, and I am always fearful of  small town police.

I did a couple miles to warm up before the race. Legs didnt like it one bit after the hilly 7:30ish pace 10 miler from Friday. Guess I was going to see what I had on tired legs. Didnt know hardly anybody there except for Paul, Nicole and the OG. Jay Nester was MIA. Erin Roof and her daughter were actually there for a pageant, but were on hand to watch from the aforementioned funky coffee shop (http://www.midnightrooster.com/).

With the start, I was surprised how many people were kicking my ass right off the bat. With only 2 known players in this game, I was at a loss whether any of these guys was for real. Mile 1 started off flat, then plunged down a hill, followed by some surprisingly tough little inclines as you weave on the side of the mountain. I hit mile 1 at 6:07 by the marker but my Garmin didnt beep back until 6:21. Legs were not loving it. The good thing was the heat wasnt too bad (about 70) , though you could definitely feel it with the high morning humidity we have in SC. I lost touch with Paul and another shirtless older guy by this time, so I didnt knwo where I stood in the race. I had a glimmer of hope at a trophy hunt for an overall placement before the race, but I think I had already resigned this hope by then. I was trying to stay with the OG but he was really getting it. I kind of latched on to him. I figured I was at least 8-9 people back at almost 2 miles in, but then we hit the beast of hill on Wood something rd. People started dropping like flies as the OG powered up the mountain with a large blue-footed monkey on his back. I didnt look at my mile 2 split. By the time we reached the flat last half mile or so, I was hurting pretty bad. Legs had no spring and every time I surged Robbie had an answer. He was not going to give up easily. Plus, I know he has a wicked kick of his own, having destroyed me at the 2010 Get in the Green in the final 100 meters, beating me at my own game. 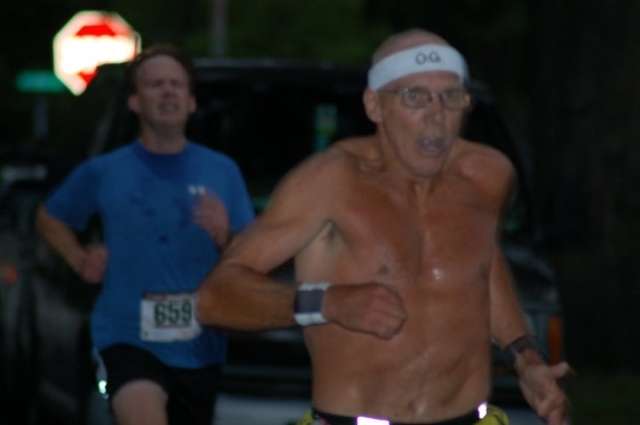 Finally, with about 400 meters to go, I blasted into hyperdrive and went “all in” for taking him down. I passed him in the final curve and  flew down main street deathly afraid of Robbie returning the favor. What I didnt even notice is how quickly I was closing in on the next guy. I made a conscious decision not to headless chicken it and try and overtake him at the line. I figured we were battling it out for 5th place or something, and I knew my time was going to be on the slow side anyway.

Nope, it was for third. I had been locked in a mano y mano with Robbie for so long I had lost sight of the race at large. So I settled for 4th place, 19:27,.  A little slowish for me but I’ll take it with the hills and lead legs. I was finally able to return the favor on the OG for the above pic too. Luckily, did not miss out on cash or trophies, or I would have been devastated. Yes, I am that sick. Awards were YMCA hats, which are nice…except for people with freakishly large craniums. Paul crushed it out there with a low 18’s win, and the OG has obviously returned to form with a 19:30 for 5th. Oh, and I did win my age group. The Lickety Split wins the prize for the weirdest AG’s. Mine was 36-43, the mid-life crisis category I guess. I also ran into Amy “the Tiny Terror” after the race, as she was up in Hartsville for her husband’s HS reunion. We had to get a picture of the best running blogs in Columbai and Charleston, right? Or maybe I just want to look even more like an albino sasquatch next to her. 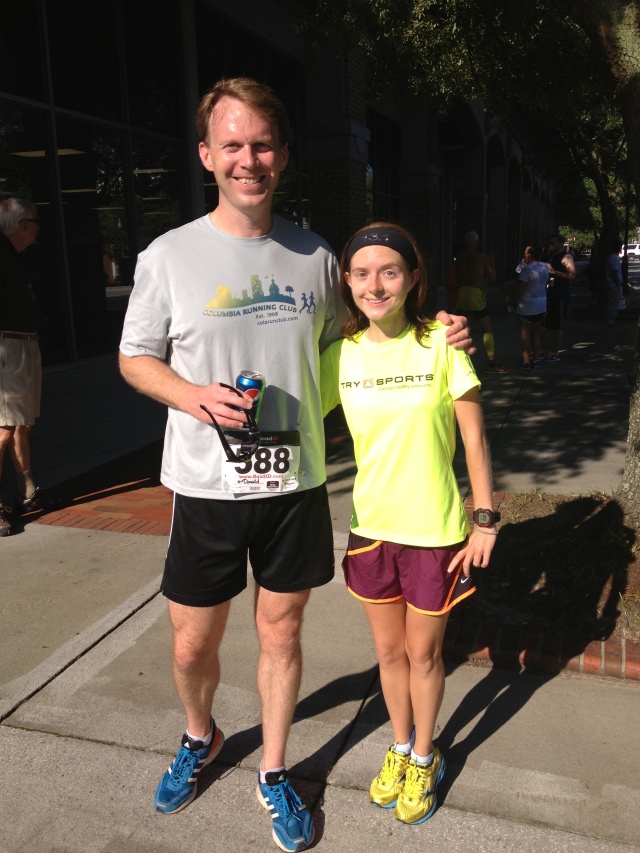