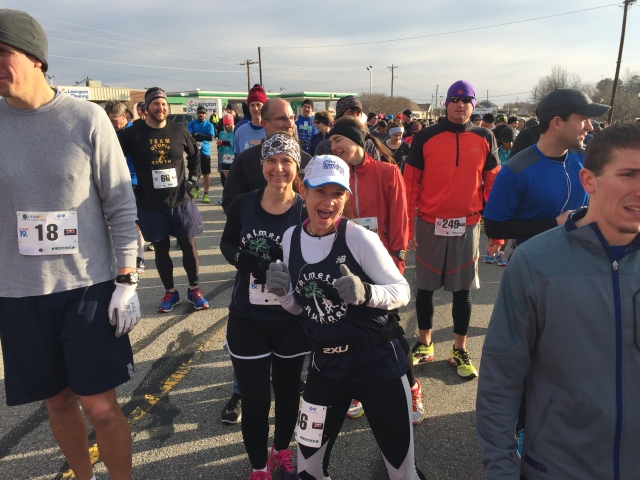 The Lexington Race Against Hunger, or LRAH, is now in its 15th year and has been a staple of the Tour de Columbia for most of its existence. While late February has given the race some tough weather at times, there is usually a large and brutally competitive crowd. I’ve run the race every year since 2009 and I think I may have one 3rd in AG to show for it. I think I must have placed 4th about 5 times, because my photo library of the race is full of me looking dejected and holding up the number 4. Usually next to Drew, Scott Flicker, Code or some other 35-39 beast. 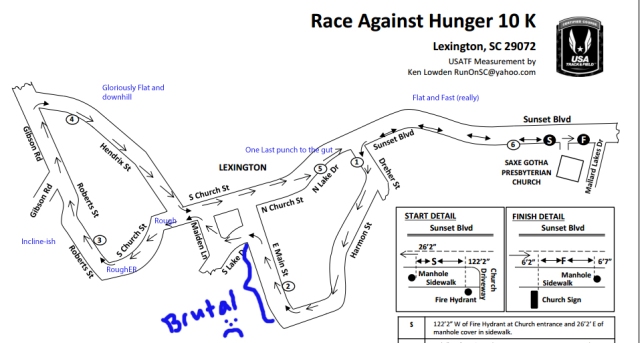 This race has some fast times, but it is purely because of the competition. The course is tough with a capital T. It is in Lexington, after all – a place seemingly on some prehistoric fault line with mountains popping up out of nowhere. Speaking of mountains, this race has one. Mount Main Street. For the uninitiated, the course lulls you into a nice warm feeling of safety in the first 1.5 miles – you go down a mostly flat stretch on 378 before descending into a net downhill, rolling stretch in a neighborhood (Dreher and Harmon Rd). You will then take a right turn and drop an expletive of your choosing.  Mount Main Street is probably only a little over a quarter mile, but will suck your will to live. But, while Mt Main Street may get all the attention, once you’ve climbed her summit, the 2 climbs on Church street will have you praying for mercy. (I’m so proud of that one.) So essentially how you manage the uphill miles 1.5-3.5 will determine your race. There’s a bump at 4.5  and the 5 mile mark, but you’re home free in the last 1.2 back on 378.

For some reason I assumed an 8 am start for this race. Showing up at 7 am the place was a ghost town, and I soon realized it was actually an 8:20 start. Hundreds of races in and I still make stupid mistakes . Did a couple miles with my CRC presidential predecessor Rick Gibbons, who has dedicated his post administration career to becoming a 50 stater marathoner. Twenty-six down after last weekend – look for him in the 4:15 Run Hard pace group next week.

By the time we get back its about 20 minutes to start. There seems to be fewer people than usual, and most importantly, a gaping hole in the 35-39. No Code. No Steven Johnson. No Gomez (he was volunteering). No Micah. No Luke. No Trophy. Angel showed up to enroll Jenn Covington in Palmetto Runners but wasn’t running himself. Drew was up in Greenville running the GHS half. Things were looking up for some AG glory.

With Justin, David, Tracy,  and Drew in Greenville, the Team Utopia crew was limited.  However Chris , Eliere, Michael Jensen,  Ivanka, Ilia and Julia were on hand along with myself.  Palmetto Runners fielded new member Jenn Covington, Jennifer “JR” Reeves, Luci and Jeff. Strictly only had Drohomirecky and Plexico, though with no other local elites, this race was going to be a cake walk for the Lightning.  Brigitte Smith, Pam and Mike Griffin, Kristin, Ty Thomas, David He, Scott Flicker, Devon Shirley, Pete O’ Boyle, Barb Brandenburg, Alfred Baquiran, Scott Brewer, Thomas Beattie, Alex Ponamarev, John Gasque, Lisa and Jesse Smarr, Brady/Diesel Ward, Wes and Rhea Spratt, Paul Drohomirecky, and  Matt Buffum were some of the familiar faces. Oh wait, dont forget Brandenburg. He’s still hitting every race he can before I turn 40, on his campaign to defeat the Blue Shoes 2015 Masters run. Although I’m like 80 points down, at least I can take solace in the fact my ghost is haunting his dreams.

With the start Plexico left us all for dead immediately and the pack  separated out quickly with the less competitive field.  Ty Thomas  latches on to my side and starts his psychological warfare: the constant narrative. He tries to barter his Palmetto 200 relay legs (he’s on my team “Van on the Run”) and I  shot him down – I drew the short last leg and no one’s taking that from me! I separate from him on a little incline then he’s right back in my ear, shaming me for running so slow. He then ups the ante and proceeds to pass me, just as we hit the mile marker with the turn onto Dreher St. Split was 6:27, basically right on 40 minute pace, though this (and mile 6) are the flattest miles on the course by far. Ty starts shouting at Brandenburg, who is about 50 meters ahead. Well at least its not me anymore. I try to tell myself to keep up with these guys. Running 200+ races over the past 5 years I have stalked so many race results and people in my ability level that I recognize the two right in front of me without ever seeing or talking to them outside of a race. One is a tall guy with a PR or ER shirt that I know must be Robert Taylor – a beast of a triathlete who runs almost exactly my times in 5ks and 10ks. The other is a shorter guy in all black that looks younger than he is, which must mean he’s Tracy McKinnon, a guy that always runs this race and always beats me for AG glory. He’s in my 2011 LRAH finish photo and shares the exact name of a girl I went to elementary school with. Do not question the bizarre and sick brain that resides within the melon headed skull. In any event, these guys are right ahead of me and I stick with them for the next several miles. Ty, who suddenly gapped me by over 25 meters, gets reeled in as we start to climb Mt. Main Street. We hit mile 2 halfway up this monster in 6:15, which is way too freaking fast and explains why I’m hurting so bad.

I’m pretty gassed by the top of the mountain but regain some of my composure on the ensuing flatness of Maiden Ln. Gomez is there at the water stop telling me to go get my sub 40. I’m probably still on pace except I feel like absolute death. By the turn onto Church St, I’m again fighting the psychological battle of still having 3.5 miles to go and feeling like I’m dead last. Our pack has separated from everyone behind and they are letting cars go behind me. By the top of the second hill on Church I know I’ve definitely slowed down, so I stop looking at my Garmin. The turn on Roberts is the beginning of the Jailbreak finish and is still a slight incline, which kills me. They had a time caller at mile 3, who gave me like a 19:33. It’s hard to do math with an oxygen-deprived brain, but I figured this translated to almost exactly a 20 minute 5k. That was great and all, but I was already 3 steps into the pain cave, so I knew it would be really tough to pull out a 39:59.

Mercifully, the course levels out as Roberts merges onto Gibson. I’m finally able to stride out again and flush out some of this lactic acid leg bath I’ve been drowning in. By this point I’m basically all alone, with Robert, Tracy and Ty about 20 meters ahead. There’s a right turn on Hendrix, which starts a long flat and downhill stretch. I usually try to ramp it up here to make up time lost in the mountain climbing, but all of a sudden the wind kicks in. Wind is not my friend. Little 140 pound singlet wearing guys can tuck in and fight a headwind, but my Sasquatch physique is about as aerodynamic as the Titanic. Its completely flat but damned if it isn’t as hard as hill climbing. Feels like I’m barely moving. I didn’t look at mile 4, which was halfway through this stretch. With 2 miles and change to go, I figure I need to start ramping up the pace. Hendrix takes a nice downhill and I fight to keep my form, which usually starts to go all to hell as I get tired, especially on declines. We turn back on Church and another hill climb to the Main st intersection – still all by myself. One last quad crusher of a hill before 378, and the mile 5 time caller gives me a 33:07.  Yeah, doing a sub 7 1.2 miles would be tough completely fresh, much less in my wind-sucking , head-flopping condition.

Once I get up to 378, I realize that Hendrix just had a cross breeze. Now this was a full-on headwind. Son of a bitch. I was banking on being able to throw down hard in the flat last mile, but it feels more like I’m running in place. Oh well, I guess the sub 40 was out the window.  That doesn’t stop me from  kicking it in. I catch Robert early on and set my sights on Ty and what looks like David He ahead. We start hitting the tail end of the 5k, mostly walkers. For some reason Ty and David are dodging in between the walkers. I ride the yellow line free and clear of the crowd. At about 400 meters out I push in all the chips and go for it. I catch Ty and David about 100 meters from the finish and I am in full headless chicken mode. You guys are getting BLUE SHOED! But wait… I feel a presence. All of a sudden Ty blasts by on my right and I have zero reserve to respond. Noooooooo! Just as my ego gets crushed, here comes David on my left and he gets me too right before the line. OMG. I see high 40 on the clock but I’m still in absolute shock from this brutal double dose of my own medicine. I cross in 40:56. The three of us are all sucking wind like there’s no tomorrow, and Ty is laid out like a dead man on the pavement. Well, at least I made them earn it.  I’m still depressed about getting smoked like that, but I have to give them both credit – they kicked my ass at my own game. My consolation – first in age group! Toby Selix, who “stole” my AG award at the Long Run, finished 3rd overall, and Tracy apparently has turned 40, so I finally got a first place plaque. A bit of a hollow victory, for sure, but I’m never one to turn down trophies. Also, I can’t be too upset about breaking my course record by a minute.

In the overall, Plexico enjoyed his walk in the park and won in 36:03, 3 minutes and 16 seconds clear of the field. Colin Spangler finished second with Toby Selix 3rd.  Although I was too slow to see it, I give major props to Brent Shealy for outgunning Brandenburg at the finish line to get first masters. Robert Taylor and Norm Ferris went 1-2 in a brutally competitive grandmasters. Alsena Edwards captured 2nd in ladies grandmasters.

Age groups: Brady Ward took 3rd in 2-14 with Diesel hiding in his shadow. David He won 1st in the 25-29 and also took my pride. Ivanka Tolan captured 1st in the 35-39. Tracy McKinnon, Scott Flicker and Scott Brewer swept a very talented 40-44. Julia Early won 1st on the ladies side. Ty Thomas and Matt Buffum went 1-2 in the 45-49. Barb Brandenburg and Jenn Covington did the same among the women. Lisa Smarrtook 2nd in the 55-59 and broke an hour for the first time in many years. Pete O’Boyle took 1st among the men. Lynn Grimes won the 60-64 and Alex Ponomarev took the 65-69. Brigitte Smith won among the women. Jesse Smarr was champion of the 75+ and would have won the 70-74 as well.